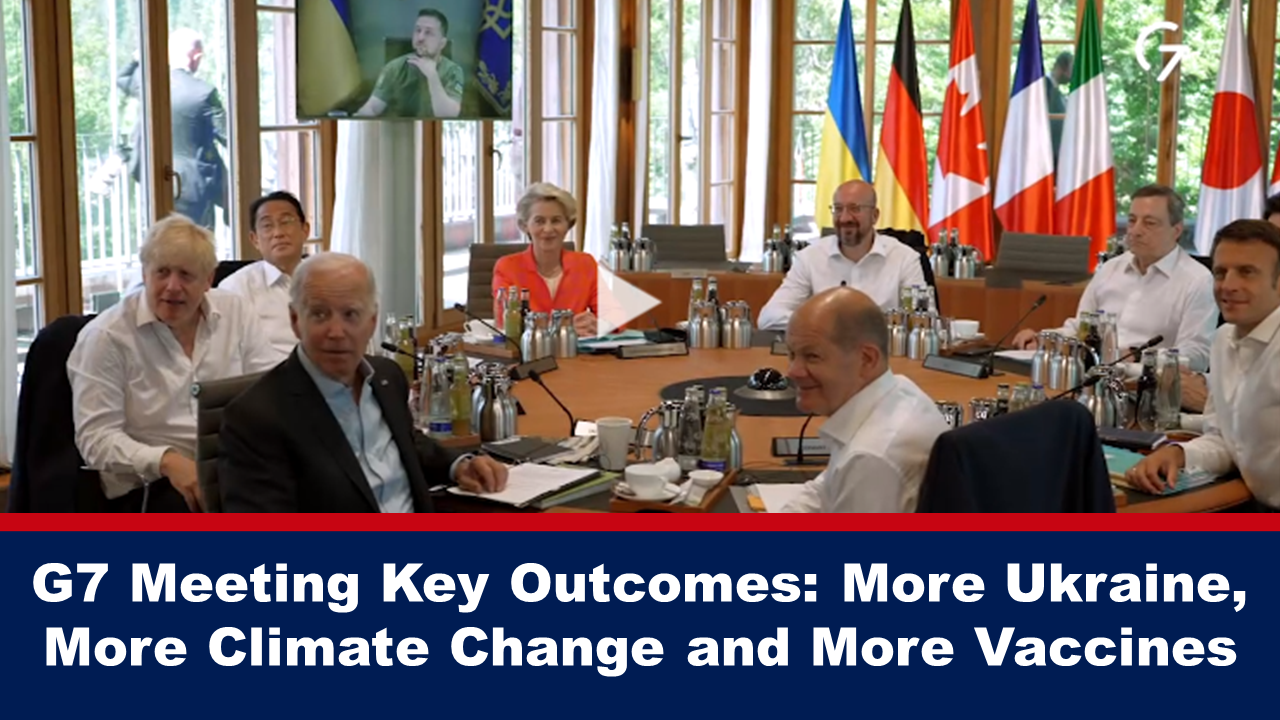 At the G7 Summit on 27 June 2022, leaders of the Group of Seven rich nations gathered in the Bavarian Alps to discuss the importance of investing in preparedness and other measures to prevent history from repeating itself, as well as helping countries to manage Covid as an endemic disease.

Johnson said: “While the worst days of the coronavirus pandemic are, thankfully, behind us, we cannot be complacent. The next potential pandemic could emerge any moment and with it, the devastating human and economic consequences we have experienced over the last two and a half years.”  Adding that the pandemic had “caused far-reaching economic devastation”, and that stopping any future one from ever happening again “will require a concerted and coordinated international effort”.

Although pandemics used to be described as ‘once-in-100-years’ events, the Prime Minister’s Office said that the chance of a pandemic on the scale of COVID-19 occurring in the next 25 years “could be as high as 50%”.

The funding announced by the Prime Minister on 27 June 2022 will establish the UK as a founding donor to the new Financial Intermediary Fund for pandemic prevention, preparedness, and response, alongside the US, EU, and others. This new fund will be one of multiple such funds hosted by the World Bank. Governments, NGOs, and private donors have been encouraged to donate to the new fund, which was called for by G20 Finance Ministers in April 2022.

At a meeting of the G20 countries in Indonesia the week before, health and finance ministers discussed much the same issues as the G7 and described the establishment of a new Financial Intermediary Fund for pandemic prevention, preparedness, and response as “urgent”, stating similarly that investing in health systems resilience was massively more cost-effective than mitigating the consequences of failure.

However, they also noted that while Covid has been the overwhelming focus of recent attention, the World Health Organisation (WHO) has reported that 10 million people fell ill and 1.5 million died from tuberculosis in 2020 and that HIV and malaria continue to be a major challenge for many low- and middle-income countries.

In addition, the G20 heard, that by 2050, the “silent pandemic of antibiotic resistance” is expected to kill more people than cancer and road traffic accidents combined.

“Improved pandemic preparedness and response” is the last on the list of the key outcomes of the G7 Summit.

The top of this year’s G7 agenda was Ukraine. “G7 stands firmly by Ukraine’s side for as long as it takes,” the website states as the first key outcome of the Summit. 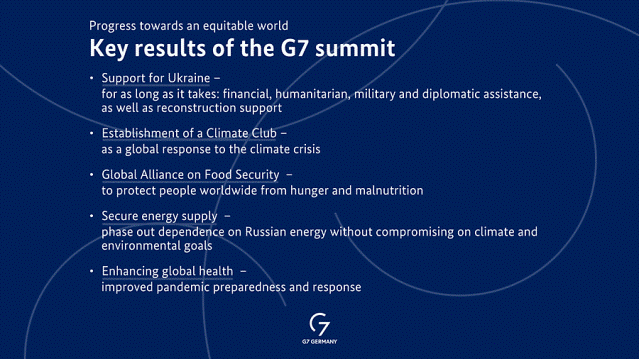 The G7 Heads of State and Government discussed one topic in particular – the war in Ukraine. Federal Chancellor Scholz stressed that the war would shape international relations for a long time to come. “In relations with Russia, there can be no going back to the time before the Russian invasion of Ukraine.”

The G7 Heads of State and Government discussed one topic in particular – the war in Ukraine. Federal Chancellor Scholz stressed that the war would shape international relations for a long time to come. “In relations with Russia, there can be no going back to the time before the Russian invasion of Ukraine.”

And of course, the “climate change” agenda featured high on the list, second only to Ukraine. The G7 agreed to establish a “Climate Club” by the end of 2022 which aims to “accelerate the international climate change agenda.”  Further action G7 has taken:

commitment, for the first time, to achieving a decarbonized electricity supply by 2035 and pledges to end coal-fired power generation;

recognition of the need to provide more support for vulnerable countries in coping with the damage and loss caused by climate change;

making further efforts to achieve the 100 billion US dollars per year pledged by the industrialized countries for climate finance; and

Germany reaffirmed the goal of contributing at least 6 billion euros to international climate finance by 2025. Germany will not only plan to provide additional funds, but it will also do more to ensure that previously earmarked expenditure is used in a climate-friendly manner.

Germany took over the presidency of the G7 at the beginning of 2022. The priorities of the G7 Germany agenda, Germany’s Presidency, are:

Sustainable Planet through the “Climate Club.” The aim is to move forward together on a socially just transformation, providing a crucial boost for international climate action.

Economic stability and transformation. “Under its G7 Presidency, the Federal Government firmly believes that an ecologically and socially just transformation can go hand in hand with economic prosperity. We will continue to coordinate closely within the G7 to shape the recovery of the global economy … while at the same time setting the course for a sustainable future.”

Healthy lives. Their perception of “health” is notable.  It is solely focused on one thing namely, vaccines. “In order to achieve the goal of the World Health Organisation (WHO) of vaccinating 70 percent of the world’s population against the coronavirus by mid-2022, the global vaccination campaign will require substantial acceleration.”

Investment in a better future. The aim of which is to advance international cooperation for sustainable development in the spirit of the 2030 Agenda.

Stronger together. “Germany aims to use its Presidency to promote a strong commitment to social justice, equality, and inclusive digitalization.”

It’s becoming more and more difficult to differentiate between meetings of governments and those of the World Economic Forum (WEF) in Davos.