“Corona test” – how the world is manipulated by being –seemingly on purpose- falsely informed?

In case the reader once thought that we have fantasized together about our skepticism against the so-called and never proven or isolated “coronavirus”: we too are just gullible re-tellers.

In this article, Dr. Robert Gorter pays attention to the great confusion among regular medical doctors and healthcare providers alike about the definitions and the power of the tests performed in the COVID-19 epidemic: antibody tests and ELISA; PCR, epidemic versus pandemic, DNA viruses versus RNA viruses versus RNA retroviruses; exposure versus infection versus disease; immunity and vaccinations; T-cells versus antibody production.

Dr. Robert Gorter: What do you do if you want to keep the fear going? Test more and more people and you will find more and more positive tests and among younger and younger people; because the elderly have already been tested.

It is certain that a completely improper discussion is now taking place in Europe and the USA. It is claimed that tests show that many, many new infections are detected due to our deformed behavior and that of tourists, especially in the regions where we sit on the beach. 88,000 tests are said to have been carried out, with approximately 800 people tested  (0,85%) “positive”. Including those 40 cases in the “Epicenter of the city of Hillegom,” the Netherlands. Less than 1% has been tested positive by an invention burned down by the inventor personally long ago, the test that yields up to 85% false positives. Chances are only 114 have actually been tested positive, who knows.

To prevent a second lockdown, we have to wear a muzzle for young and old, healthy and sick. This then happens on the basis of outright lies from figures by “scientists” such as Bill Gates (a famous American epidemiologist and virologist) and Dr. Anthony Fauci (who has major conflicts of interest with financial and personal ties to Big Pharma and Funding agencies like the NIH.

The “corona test” is therefore used as a vehicle to impose even more oppressive restrictions on the world population.. A weird criminal habit called “popular interest”. So what does the US CDC say about using this “corona test” if you have tested positive and declared to have become a walking public health hazard?

Dr. Gorter is an expert in Immunology and Virology (especially HIV and other retroviruses) and headed for many years the Department of AIDS Epidemiology and Biostatistics at the University of California San Francisco Medical School (UCSF). He was the founder of the Gorter Model as an effective nontoxic anticancer therapy through immune restoration. Gorter: “my great concern is not only that very inaccurately facts and concepts and assumptions are mixed together but also that there seem to be no excess of deaths. The German State Department for Statics found no excess of deaths in 2020 compared with the same weeks of previous years. 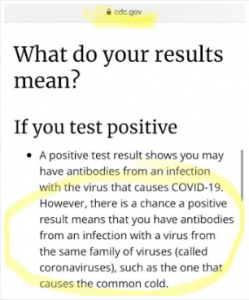 Moreover, we also assume an undetected and never isolated “virus”. And even then there is a good chance that you will test positive for a cold. Moreover, it is certain that if you have been smart enough to get the “flu shot”, you do not need to be tested. It is already there:

We are being cheated with the help of a completely failing “test” and are therefore collectively annihilated. And then we say it neatly. 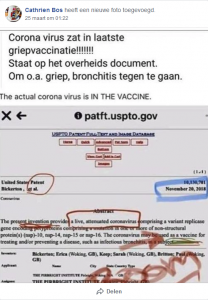 The fancy dress ball that is performed by the gentlemen in a tight suit is deception in optima forma. Every effort is made to bring the Netherlands into line with the rest of the world. The people who propagate that you better take their passport to prevent them from fleeing if they thunderously fall.

The theory is that the “coronavirus” is the cause of the disease “COVID-19”. If it turns out that it is positive after the test, it does not mean that an undetected or isolated “coronavirus” is saddled with “COVID-19” disease. It is much worse. Read on the package leaflet, which was found in Australia, what you could have among the members if you were tested “positive” on “COVID-19”: 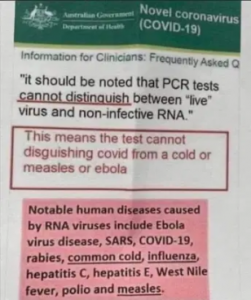 The test cannot really do much. It cannot distinguish between “viruses” and “non-infective RNA”. You might as well have measles or Ebola or even polio among the members, who knows. Anyway, you get the label COVID-19 on your toe when you’re in the morgue.

So based on this crappy practice, an entire world is being stressed and more than half are made to believe that the measures will defeat the “corona virus” one day. The Dutch are encouraged to collaborate with all kinds of fantasists with triple agendas. “Pay a little attention to each other” means nothing but “links each other as soon as possible and as long as we have not yet introduced the “Social Credit System” as in China.

“You are forced to participate by the neighbors, not by the “government”. Like-minded people cannot find each other anymore due to the nonsense of “social detachment”, muzzles and the long-term detention of healthy people. Counter-voices are bombarded by the rabid insane media such as “conspiracy theory” and “hippie noises”.

So short round the corner for people who still want to see and hear the truth, we can summarize it as follows:

“How long do you want to sleep further and swallow everything you are served because it would be for your own good?”

* Robert Gorter, MD, PhD, with commentaries; Published as an article in the DE BINNENLANDSCHE BATAAFSCHE COURANT in the Netherlands.