Robert Gorter getting ready to immigrate to San Francisco, USA in 1982

Robert Gorter moved to the USA was premeditated but in 1982 he had to suddenly jump in a plane to be in time for interviews at a few universities in California for a position as a resident for a specialty training. Within days, he packed and with his bicycle, his (Rudolf Steiner) books and his Nikon camera he immigrated to the USA with 3.000 US Dollars in his pocket. He left behind all he had built over the previous 10 years and put it in a non-profit organization (Foundation) called “Stichting Odin” in Amsterdam. 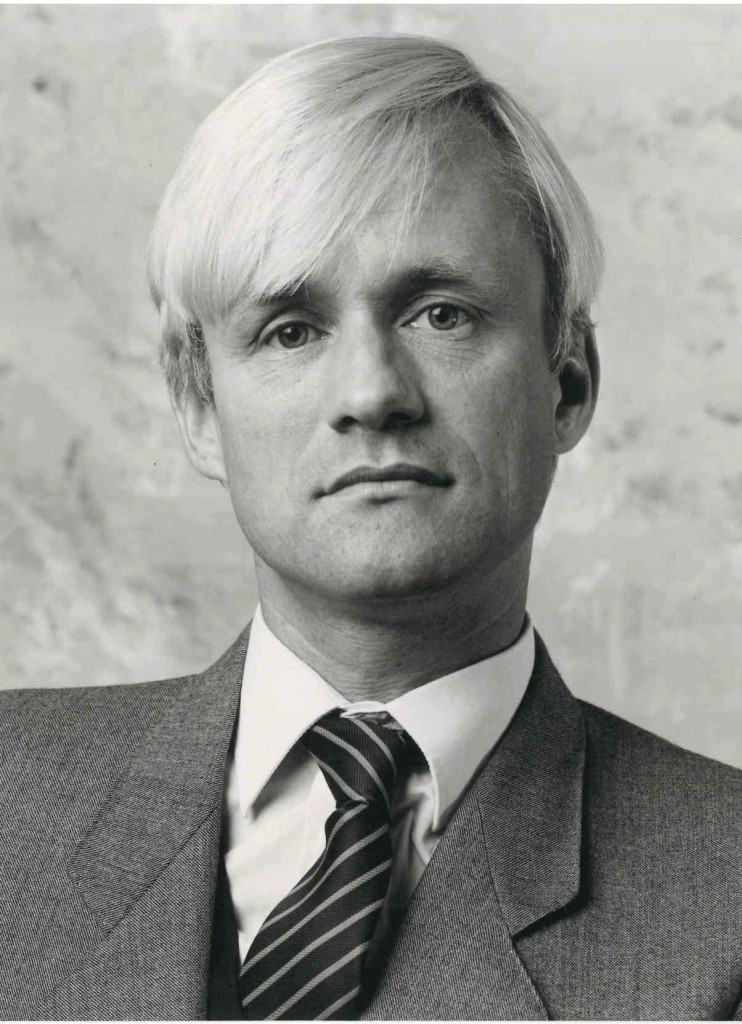 Picture of Robert Gorter about 8 months before he moved to San Francisco. This picture was made in Amsterdam by the daughter of Elly Bos (secretary to Robert Gorter) named Manu Bos to accompany each of the 60+ application packages for specialty trainings In General Internal Medicine or Family and Community Medicine Programs in the USA. 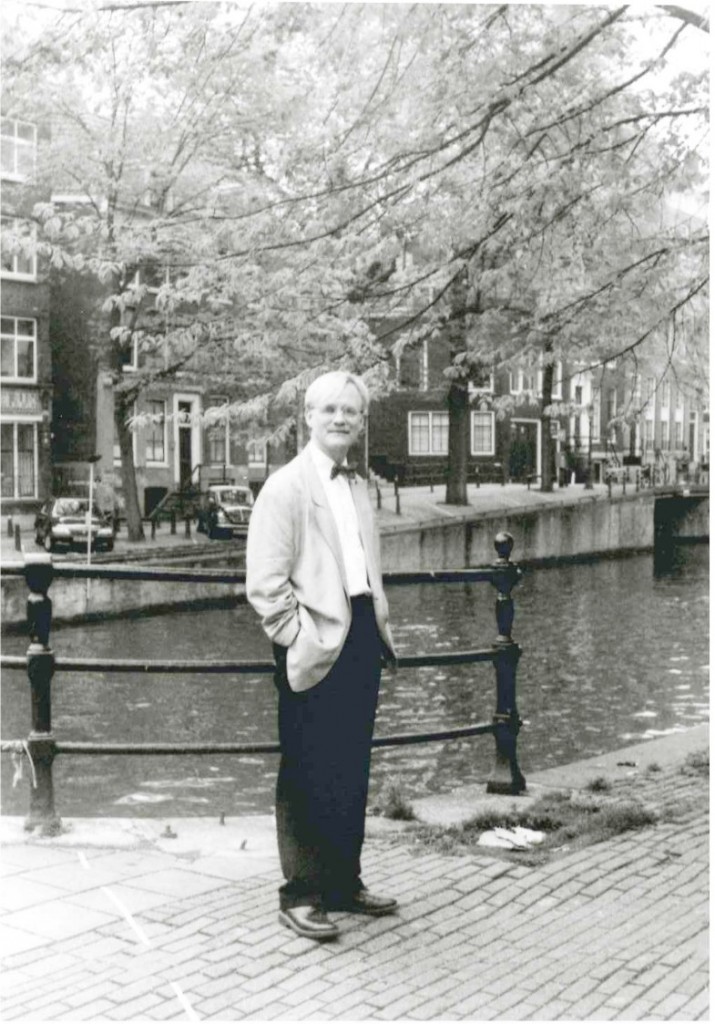 Robert Gorter in Amsterdam, a few weeks before he immigrated to the USA. 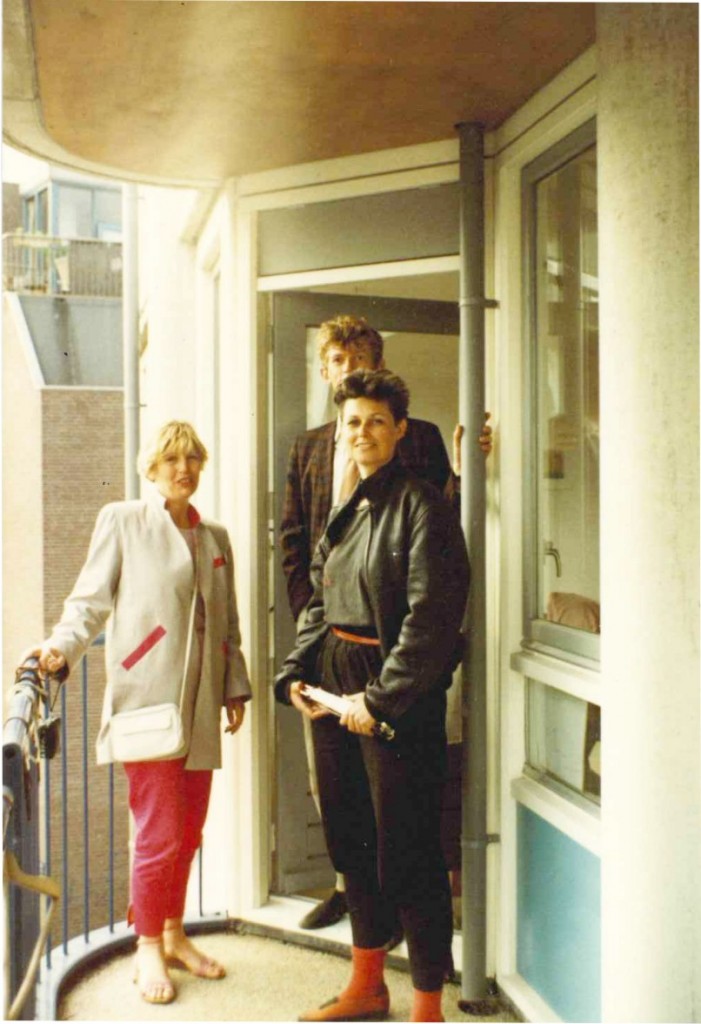 In Amsterdam, at the apartment of Christophe Vermeulen and Rene ter Horst, Ria Bos (previously secretary and doctor’s assistant of Robert Gorter, l) and Arie Bos, MD (the medical doctor Robert Gorter handed over at no costs his clinics in Amsterdam), and his wife Reinie Bos (r) in 1983 or 1984).

In 1973, Robert Gorter had established a very successful clinic and treatment center, called the “Ita Wegman Huis” at the Weteringschans 72-76 in the center of Amsterdam, near the Rijksmuseum. By the time Robert Gorter immigrated to the USA, there was a waiting list for new patients of 18 months…. (!). The clinic was too large and too busy for Dr. Bos alone and thus, he was joined my Thomas Kelling, MD (not in this picture). The friendship between Robert Gorter and Arie Bos cooled off a bit when Arie Bos wrote a book on HIV/AIDS where he wrote in the introduction to his book (it was already 1988 or 1989), that HIV/AIDS was a kind of “punishment” or “karmic correction” for gay men to learn not to be promiscuous (!). Arie Bos should have known better …… when Robert Gorter was asked by Arie Bos to review the book and when he read the introduction, Robert Gorter was not willing to write a positive recommendation as Arie Bos should have known better about the route of transmission and that HIV does not discriminate like he does…… 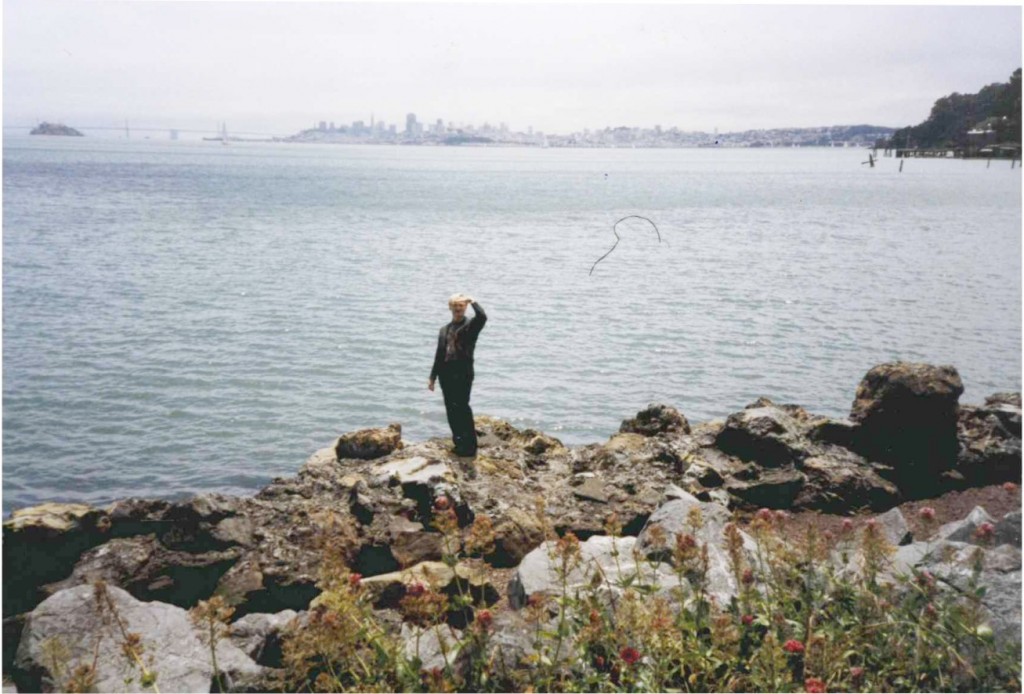 Robert Gorter seen from the main boulevard of Saucelito looking towards the skyline of San Francisco in 1993. Saucelito used to be a poor fisherman’s village in earlier times but now there is a very upscale community living there. 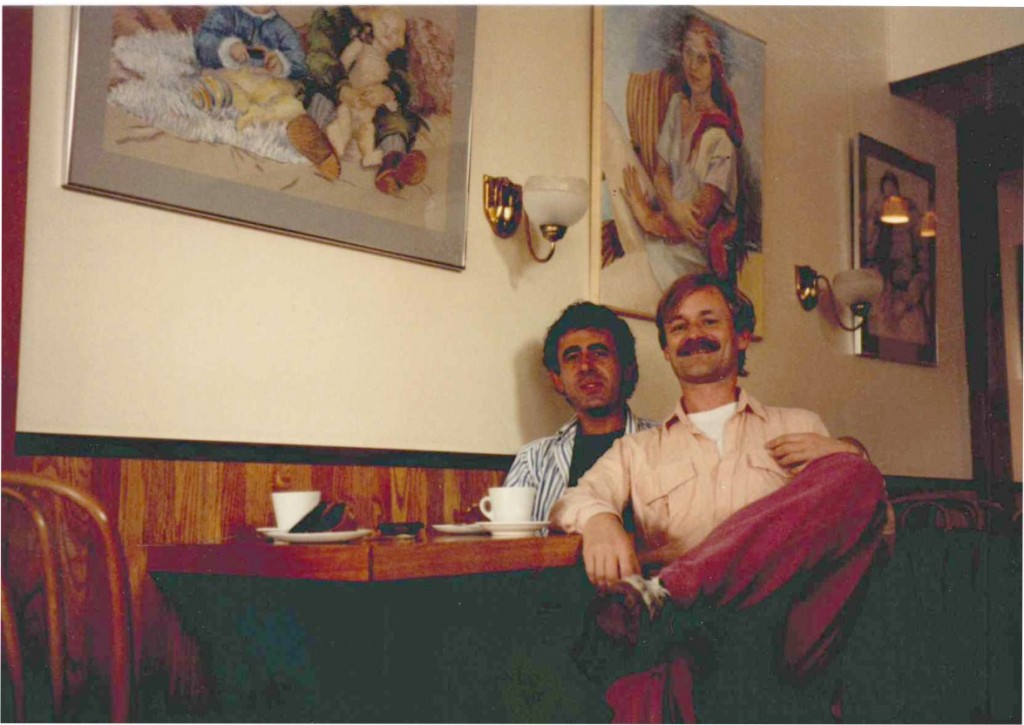 Robert Gorter with David Gershan, MD, in a coffee shop in Berkeley, California in 1981.

David Gershan was a medical student in Grenada at that time, and Robert Gorter and Lexie Ahrens made it possible for him to study in Grenada in the Caraibic Gulf, where an American Medical School has been established. Currently, David practices as a Board Certified HIV Specialist, Family Practitioner, and Anthroposophic Physician.  His HIV and Family Practice work is done in the public sector in and around San Francisco, California. 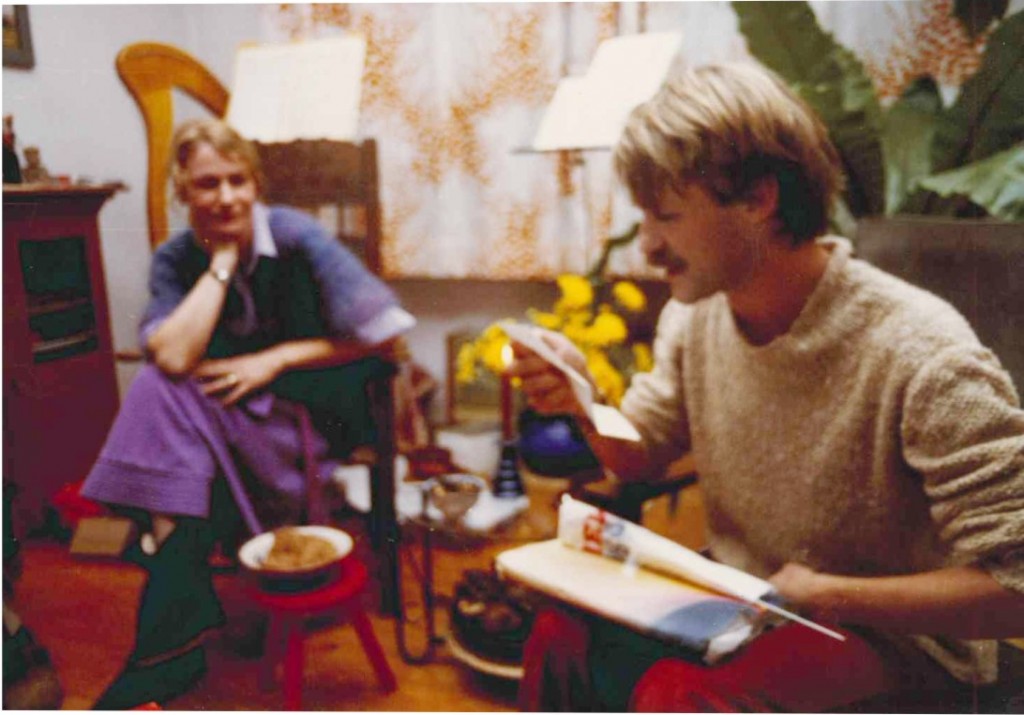 Robert Gorter at the home of Angelika and Henk Verhoog in Leyden, the Netherlands.

Here in this picture, Robert Gorter is reading a poem during a Sinterklaas party on December 5th, 1980 or 1981. Sinterklaas is an ancient annual family-oriented festival where in a Calvinistic country, a Roman Catholic bishop from Spain comes with Zwarte Piet to Holland and carries a large book where all is documented what all children in Holland have been doing during the previous year. Good deeds will be rewarded by Sinterklaas with sweets, oranges and presents; children with bad behavior would get salt and threatened to get spanked with a broom. In very sincere cases, the badly-behaved child will be put into a bag by Zwarte Piet and taken to Spain…… Children believe that Sinterklaas brings the presents. For adults, one gives each other at work and at home anonymously presents which are accompanied by a poem which exposes one”s bad habits. This poem must be read aloud in front of all others….  This is truly the fun part. Then, one drinks traditionally hot chocolate and eats banketstaaf (usually a letter M or W or somebody’s initial made of a kind of marsepan, wrapped in a kind of a light filo crust) and animals, fruits, amphibians  or dentures, or women legs; all made out of true marsepein. Great fun !!!! 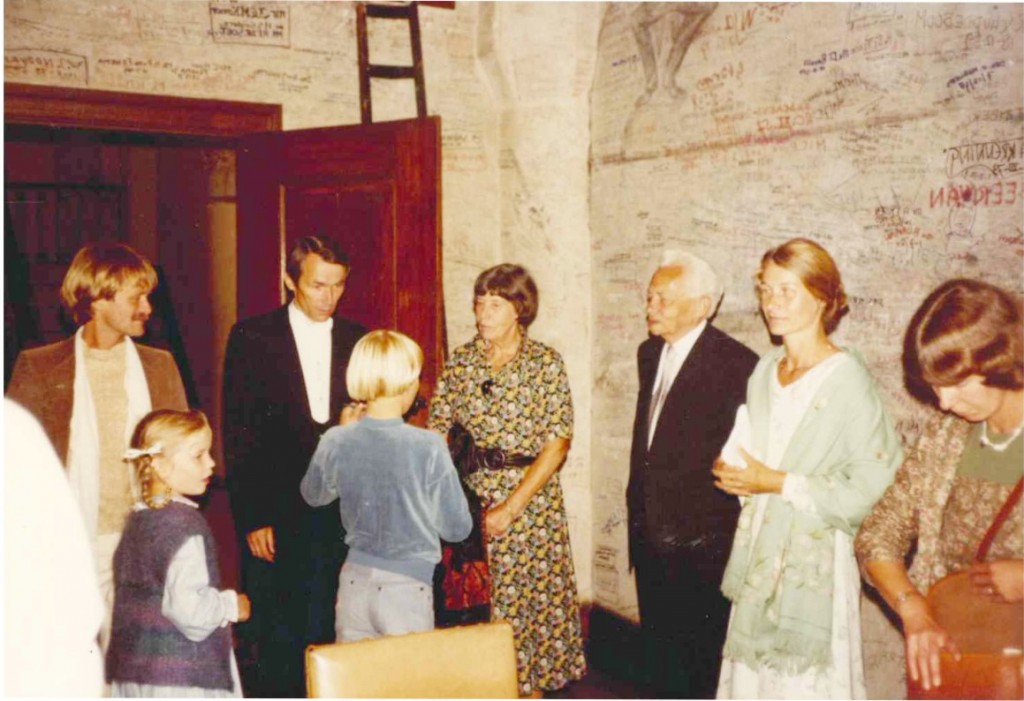 Robert Gorter standing next to Henk and his parents and his two children in front of him, and his wife Angelika against the wall next to his parents.

The official meeting took place in 1976 or 1977 at the University of Leyden where Henk received his PhD in Biology. Henk Verhoog received a full faculty position as professor in “Evolutionary Biology”  a few years later. It is interesting to notice that the white all behind the parents and Angelika is full with signatures of people since the early 1600’s who defended their thesis to obtain their PhD at the University of Leyden. It is amazing to see these signatures and dates of “newly baked” (literally translated out of Dutch) academics who received their academic credentials around 400 to 500 years ago. Robert Gorter and Henk Verhoog were old friends since 1966 when they were both students at the University of Amsterdam and shared the same interests in philosophy. They started a study group which met bi-weekly from 1967 to 2008. 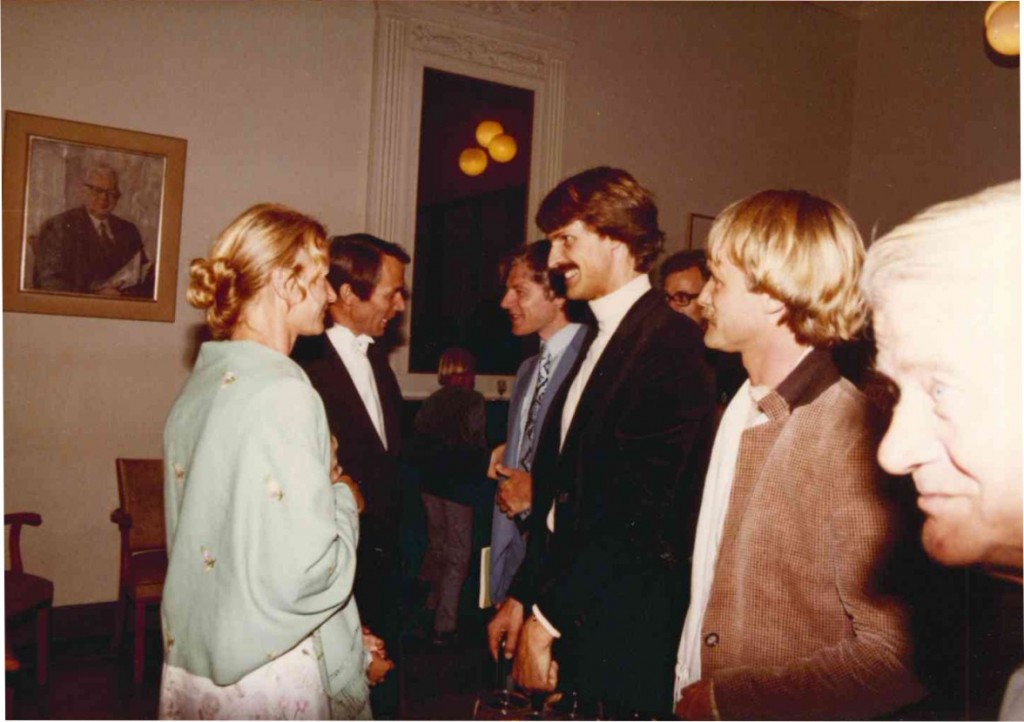 Robert Gorter at the reception after the formal presentation of Henk Verhoog’s dissertation at the University of Leyden, the Netherlands. To the left, Angelika and Henk; to the right facing them Bart Muijres (film maker and later teacher at the Waldorf Schools of Amsterdam and Haarlem) and Robert Gorter (r). 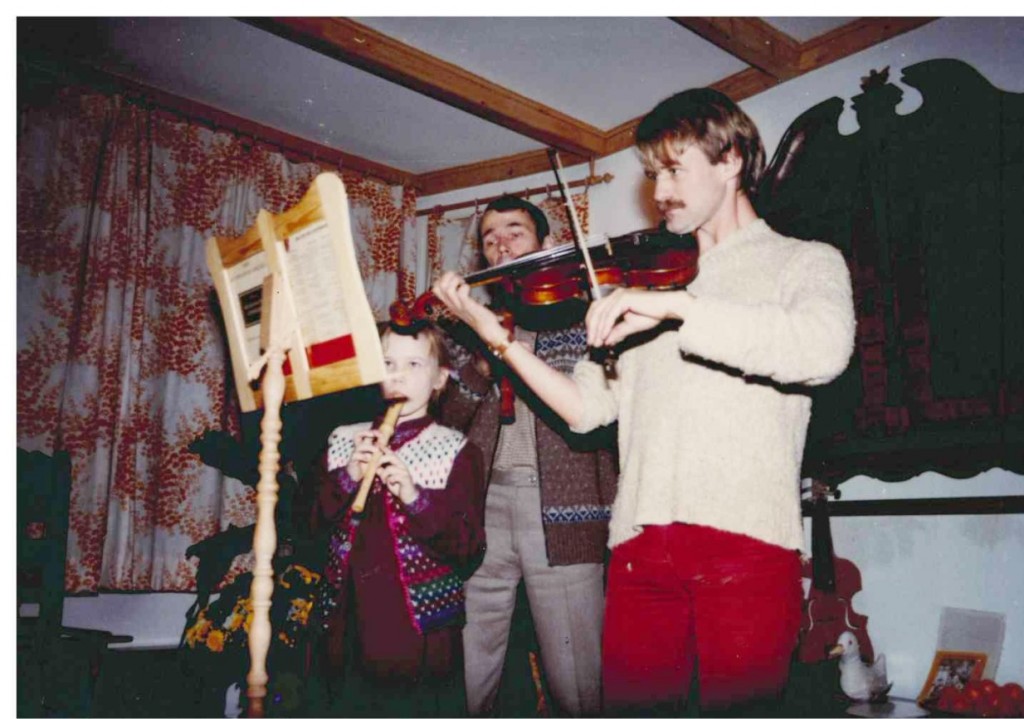 Robert Gorter playing the violin and is accompanied by the daughter of Henk and Angelika Verhoog on Sinterklaas evening celebration in 198o or 1981. We are sure it was a beautiful concert and Henk is standing in the background to make sure they play in tune. As a Libra, Henk would always seek harmony…..