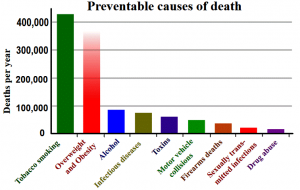 The official reason for the unprecedented closure of much of the United States in response to COVID-19 is that lives matter.   Indeed, they matter so much that no sacrifice is too great—neither to your freedom nor to the economy—if it can save even one life from the virus.

Surely this is a noble sentiment, and we do not mean to argue against it at all.  But it also begs the question: “where was this altruistic concern before—when the lives of tens if not hundreds of millions of Americans were and continue to be needlessly sacrificed, ironically, in the name of freedom and economics?”

Consider the three leading causes of preventable deaths in the US: per year, about 480,000 Americans die from smoking (some from passive smoking), 300,000 die from obesity, and at least 88,000 die from alcohol, every single year.

Together with the other leading causes of preventable deaths in the US—such as drugs and motor vehicle accidents—this means that about a million American lives are needlessly lost every single year, mostly from tobacco, followed by overeating and alcohol.

Yet this has not changed a thing; they are all legal.  Why?  Because of (instead of brotherhood/solidarity) freedom in the realm of economics?  You see, it is an American right to smoke, drink, and overeat—just as it is the tobacco, alcohol, food, and drug companies’ right to profit from it tremendously. And the State too as they collect extra taxes.

Of course, and as this last point suggests, there’s much more than “freedom” involved; there’s also enticement and addiction—that is, the programming or habituating of people to do what they normally wouldn’t.  In other words, it’s not just that you’re free to smoke, drink, and overeat, but that billions of dollars are spent in an advertisement for the express purpose of making you want to do so. And the “Health Industry” and Big Pharma benefits from all the medications and health facilities they set up to battle the after-effects of overeating, alcohol use, prescription drug abuse, etc.

Despite the million American lives lost every year from these vices—and the fact that most of them died more from addiction than freedom—the government has done essentially nothing about it, aside from requiring warning labels on tobacco and alcohol products.  And you can’t blame it; after all, we’re adults here, and freedom is a big premium in America.

But then COVID-19 came, and suddenly our elected officials have seen the light; suddenly no sacrifice is too great if it can save lives.

Consider some statistics: 240,000 has long been the maximum number of deaths from coronavirus that the US government predicted, based on figures reached by leading health experts.  Although that number has significantly dropped to something like 60,000—which is about how many people die every year from infectious diseases, America’s fourth leading cause of preventable deaths—for argument’s sake, let’s stick with that original number: To save as many as 240,000 lives, no price—including severely curtailing our freedoms and destroying the economy, that is to say, millions of lives—has been deemed too great.

It must therefore logically follow that our suddenly enlightened betters will surely take measures and enact laws to save the exponentially greater number of American lives needlessly lost every single year—especially from the top three leading causes of preventable deaths, tobacco, overeating, and alcohol—right?  (By the way, I’m not personally calling for such bans but rather showing how consistent thinking—if sincere—works.)

One could look at it in this way: if imprisoning people in their homes for weeks and months on end, destroying countless mom-and-pop stores around the nation, and even arresting fathers who play ball with their daughters in empty parks—while creating a culture where people are “rewarded” for reporting on their neighbors—are now deemed necessary evils, or the “new norm,” to save a maximum of 240,000 lives, then surely something as simple and commonsensical as outlawing intrinsically unhealthy and addictive products—or at the very least their aggressive, exploitative advertisement—must be right around the corner.  After all, doing so would save millions of American lives every year—as opposed to just 240,000 “potential” lives from COVID-19; and that, of course, is the whole point of the current clampdown, right?

Similarly, there’s little room to argue that the government would never ban things like tobacco or alcohol as that would cause it to forfeit billions in tax dollars.  Again, based on the current logic, to save just 240,000 “potential” lives, the government has been willing to sabotage the economy, tell people to stay home from work and relax and print trillions of dollars out of thin air—three things I never thought to see.  So what’re a few billion dollars in lost tax revenues compared to saving millions of American lives every year?

To reiterate, COVID-19 has ushered in a new era of appreciation for human lives: citing your freedom or the economy to justify any potentially dangerous activities—such as playing ball with your 6-year-old daughter—appears to be out for the indefinite future, since lives matter.

As such, surely our leaders will soon be enacting laws to combat America’s far more fatal activities; and, until such time, surely the newsrooms will keep these issues at front and center, including by daily reporting the exact number of deaths caused by America’s three leading causes of preventable deaths—just as they are doing now with the fourth leading cause, infectious disease, currently in the guise of coronavirus.

Or have we missed something here……?

There are massive calls from people with big money like Bill and Melinda Gates and all Big Pharma companies, manufacturing for 25 billion dollars’ worth of vaccinations with massive side effects which have never been published till recently.

Without a doubt, CDC and other regulatory national and international organizations (WHO) are involved in covering up and paid for by Big Pharma. We suggest you read our articles on Judy Gerberding (ex-Head of the CDC) and her multiple proven cover-ups…. 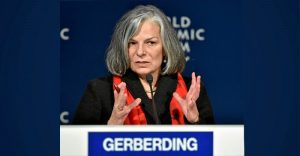 SEC filings reveal that Merck’s Vaccine Division President Julie Gerberding sold over half her Merck shares in January 2020 for $9.1 Million. That transaction followed a spate of bad news for Merck’s flagship Gardasil® vaccine against HPV.

2)     silencing and punishing whistleblower Dr. William Thompson when he told her that CDC bigwigs were destroying data linking Merck’s MMR to autism, and allowing the company to illegally reformulate its MMR mumps component. Those courtesies earned her the Merck sinecure and huge stock options. 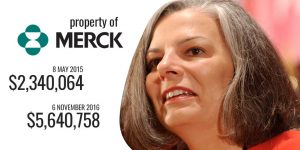 In our modest opinion, the road towards our common future is clear: more and more mandatory things to control the world population (like world-wide mandatory vaccinations for almost anything and the placement of chips under the skin to track you down wherever you go and your past; including your vaccination status and which websites you like to read online. This is already a daily business for FaceBook and Google.

And each individual must ask him/herself: “How trustworthy is my government; even the democratically-elected governments?” Democratically elected politicians who form their governments are often bought by lobbyists and Big Money. For instance, in Brussels, the administrative capital of the EU, there are at least 10,000 offices of lobbyists …  Why one could ask? Why does it pay off so well to have ca. 10.000 offices to lobby (bribe) politicians?