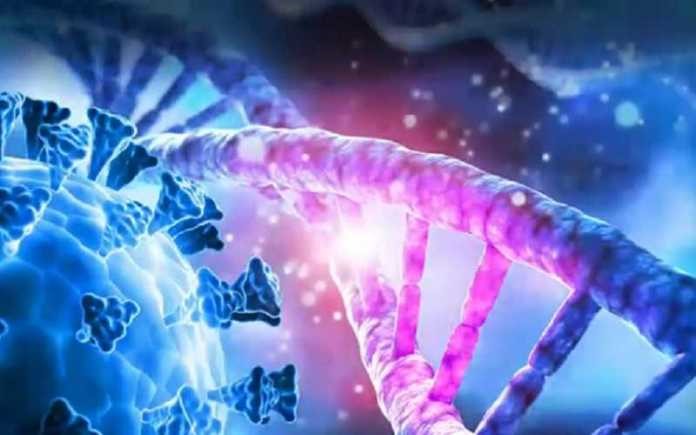 This finding can only be described as a true “horror” in its implications. Stunning new research published in Viruses, part of the SARS-CoV-2 Host Cell Interactions edition of MDPI (Open Access Journals) reveals that vaccine spike proteins penetrate the cell nuclei and wreak havoc on the DNA repair mechanism of cells, whereby DNA repair is suppressed by as much as 90%, Naturalnews.com reports.

A copy of the research paper in a PDF document on NN servers is stored at this URL:

In the conclusion of the article, the authors write:

“We found that the spike protein clearly inhibited both BRCA-1 and 53BP-1 foci formation (Figure 3D-G). Together, these data demonstrate that the SARS-CoV-2 full-length spike protein inhibits DNA damage repair by interfering with the recruitment of DNA repair proteins.”

The DNA repair mechanism, known as NHEJ (Non-Homologous End Joining) is a type of intracellular “emergency response” system that repairs double-stranded DNA breaks or mistakes in copying genes during mitosis (cell division). Without the NHEJ mechanism, all advanced multicellular life would cease to exist. No human, animal, or plant can survive without the integrity of its genetic code being protected and constantly repaired through multiple mechanisms.

DNA damage can be caused by multiple mechanisms, including exposure to radiation, chemicals in food and personal care products, or even exposure to mammography equipment and CT scans and X-Rays. In addition, almost all chemotherapeutic agents cause significant DNA damage. Excessive exposure to sunlight can also cause DNA breaks, and small DNA mutations occur spontaneously in all living organisms. For example, aviation pilots and flight attendants are routinely exposed to ionizing radiation by flying at high altitudes.

In a normal, healthy person, the NHEJ mechanism repairs DNA and prevents a disease-causing mutation from occurring. But in the presence of the vaccine spike protein, the effectiveness of NHEJ is suppressed by as much as 90%, meaning it is unable to do its job due to its inability to recruit proteins for repair.

As a result, the following “errors” are introduced into chromosomes in the nuclei of human cells, all due to the presence of the artificial spike protein of mRNA vaccines:

These errors, when expressed through cell division and replication, result in:

Since 1923, well-known and independently well-documented is the significant improvement of DNA Repair mechanisms by Viscum album (European mistletoe).

We propose to study and implement the treatment of DNA damage as discussed above, with the Viscum album.

Spike proteins go directly into the nucleus of the cell

Mechanistically, we found that the spike protein localizes in the cell nucleus and inhibits DNA damage repair by preventing the important DNA repair protein BRCA1 and 53BP1 from being recruited to the site of damage.

This means that the spike protein, which is made in the ribosomes of the cell after the cells are hijacked by mRNA vaccines, doesn’t always leave the cell and enter the bloodstream, as advocates of mRNA vaccines are telling us. In many cases, the spike protein ends up in the cell nucleus. There, it disrupts the DNA repair mechanism, as described above.

“Surprisingly, we found the abundance of the spike protein in the cell nucleus (Figure 1A),” the study authors concluded.

This means without a doubt that mRNA vaccines result in chromosomal changes in the body’s cells. It is confirmation that such vaccines do indeed wreak havoc in genetic integrity and exhibit side effects not anticipated or described (on purpose?) by proponents of mRNA vaccines.

Dr. Thomas Levy writes about the toxicity of the spike protein at Orthomolecular.org:

“Concerns have been raised about the spread of the spike protein throughout the body after vaccination. Rather than staying localized at the injection site to elicit the immune response and nothing more, the presence of spike protein has been detected throughout the body of some vaccinated individuals. In addition, it appears that some of the circulating spike proteins simply bind the ACE2 receptors without entering the cell, triggering an autoimmune response against the entire cell spike protein entity. Depending on the cell type that binds the spike protein, it can lead to a number of autoimmune diseases and malignancies.”

Even more disturbing is that Dr. Levy explains that the current data shows that the spike protein continues to be produced in the body after the first mRNA injection. Levy explains:

While the underlying pathology has yet to be fully defined, one explanation for the problems with thrombotic tendencies and other symptomatology seen in chronic COVID and post-vaccination patients is directly related to the persistent presence of the spike protein portion of the coronavirus. Some reports claim that the spike protein can continue to be produced after initial binding to the ACE2 receptors and entering some of the cells it initially targets. The clinical pictures of chronic COVID and post-vaccine toxicity are very similar, and both are likely due to this continued presence and whole-body distribution of the spike protein (Mendelson et al., 2020; Aucott and Rebman, 2021; Levy, 2021; Raveendran, 2021).

See the figures below. SARS-CoV-2 viral fragments are called “Nsp1, Nsp5” and so on. The entire spike is called “Spike” and the nucleocapsid – another structural part of the entire spike protein pathogen – is identified separately.

Overexpression of Nsp1, Nsp5, Nsp13, Nsp14, and spike proteins reduced the efficiency of both HR and NHEJ repair (Figure 1B-E and Figure S2A, B). 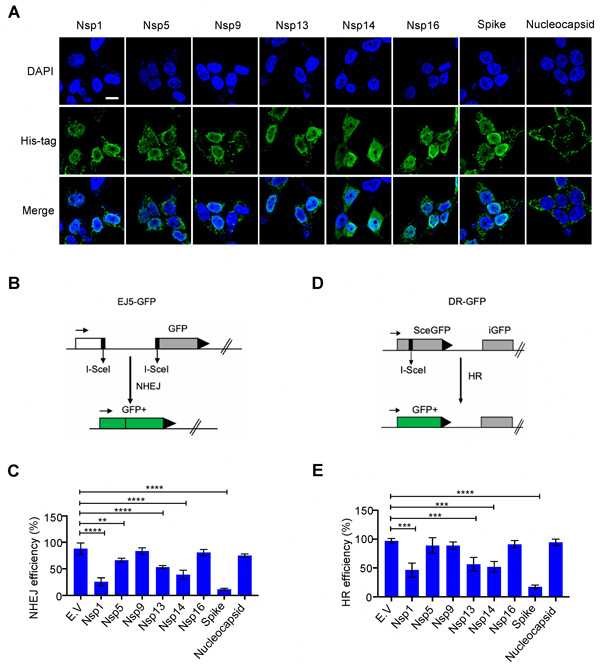 What these data show is that the greatest suppression of NHEJ activity is measured when the entire spike protein is present. From the study:

Together, these data demonstrate that the full-length SARS-CoV-2 spike protein inhibits DNA damage repair by impeding the recruitment of DNA repair proteins. 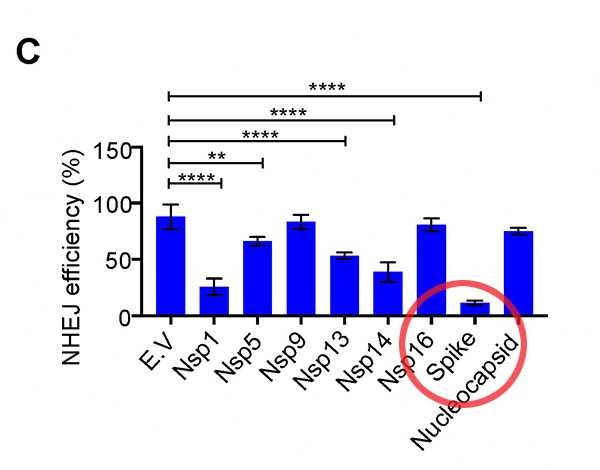 This is the spike protein that is produced by the body’s own cells after an mRNA vaccine is injected: 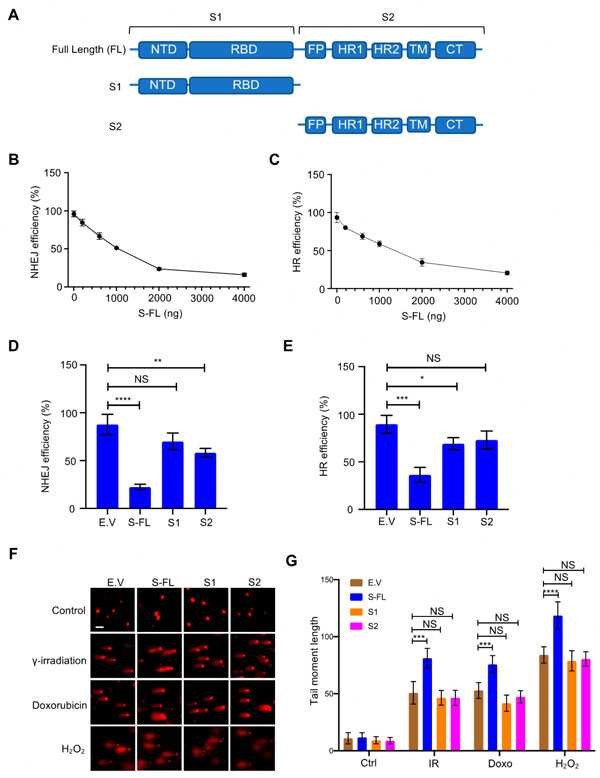 The figure at the bottom right, 2G, shows how the presence of the spike protein inhibits DNA repair after various insults to the DNA, such as radiation, chemical exposure, or oxidation. Importantly, as the study authors explain:

After various DNA damage treatments, such as irradiation, doxorubicin treatment, and H2O2 treatment, there is less recovery in the presence of the spike protein (Figure 2F, G). Together, these data show that the spike protein directly affects DNA repair in the cell nucleus in very significant ways.

5G exposure, exposure to chemtrails, exposure to food chemicals, mammography, CT scans, X-rays, and even exposure to sunlight are wreaking havoc on people who have taken mRNA vaccines

The horrifying result of this finding is that people who have taken mRNA vaccines will face suppressed DNA repair, escalating exposures once thought of as minor problems into significant threats to their health.

In other words, people exposed to 5G radiation, mammography exams, plasticizing chemicals in foods, and carcinogens in personal care products (detergents, perfumes, shampoos, skin lotions, etc.) will not be able to repair their DNA damage caused by these exposures. After relatively minor exposures, they will begin to mutate and develop cancer all over their bodies.

Remember that exposure to 5G leads to the production of peroxynitrite in the blood, an extremely dangerous free radical that causes DNA damage in brain cells and tissue cells throughout the body.

This could even be described as a sort of binary weapon system where mRNA vaccines weaken DNA repair, and exposure to 5G (or chemical exposure in the food supply) provides the weapon that breaks DNA strands and renders the body unable to maintain genetic integrity during cell replication. It doesn’t take long to manifest this in horrifying physical ways, such as the attempt to grow internal organ tissue on the surface of the skin or face, which is why today’s Situation Update podcast has been given the title, “Monsters, Zombies and Mutant.”

This research also shows that spike proteins from mRNA vaccines can lead to immunodeficiency, similar to AIDS. This is in line with what has been previously reported of a decline in the immune function of about 5% per week in people who have taken Covid vaccines (see Front news: According to UK government reports, the fully vaccinated are rapidly developing the acquired immunodeficiency syndrome AIDS ). From the study:

“…Loss of function of important DNA repair proteins such as ATM, DNA-PKcs, 53BP1, etc., leads to defects in the NHEJ repair that inhibits the production of functional B and T cells, leading to immunodeficiency.”

Immune function is also critically affected by the presence of the spike protein, which can lead to cancerous mutations in all body cells. As the study explains:

“Repair of DNA damage, especially NHEJ repair, is essential for V(D)J recombination, which is the core of B and T cell immunity. The maintenance of genomic integrity is necessary for the survival of an organism. Of the various DNA damages, double-strand breaks (DSBs) are considered the most damaging, as they can lead to cell death if not repaired or to chromosomal rearrangements if repaired incorrectly, which can lead to cancer.” See www.gorter-model.org

Furthermore, mutations in NHEJ genes, including Ku70 and Ku80, have been associated with a shortened lifespan in mice [54]. In addition, defects in DNA-PKcs (DNA-dependent protein kinase) have led to impaired telomere maintenance and shortened lifespan in mice [55]. Taken together, these indications suggest that NHEJ plays an important role in preventing age-related increases in genomic instability and functional decline.

In fact, this means that the spike protein suppression of the NHEJ DNA repair mechanism also leads to reduced lifespan and accelerated aging.

By some conservative estimates, 50% of people injected with mRNA vaccines will be dead within five years. Now we have a better understanding of the mechanisms by which this vaccine-induced death can occur.