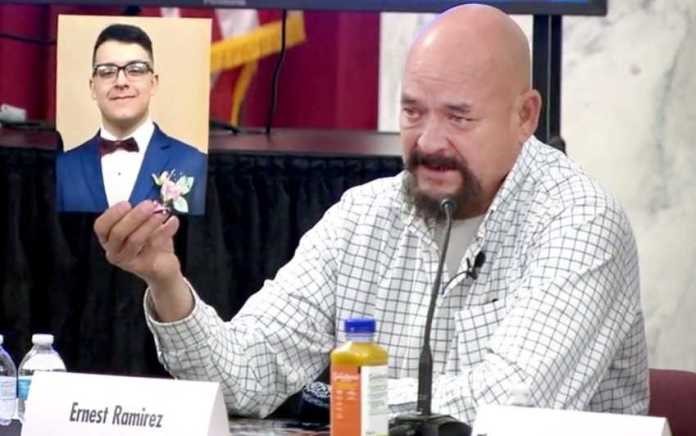 US Senator Ron Johnson (Republican) held a discussion Tuesday with a panel of experts, including clinicians, scientists, lawyers, and patient advocates, as well as a few people injured by COVID vaccines, who gave powerful testimony about their experiences, Childrenshealthdefense.org writes.

Johnson and the expert panel discussed the importance of early treatment for COVID, freedom of healthcare and natural immunity, the implications of mandates on the U.S. workforce and economy, concerns about the safety of COVID vaccines, and the lack of transparency from federal health agencies in the United States. response to its COVID surveillance requests.

Cody Flint, a 33-year-old pilot from Cleveland, Mississippi, was among those who spoke about their injuries. Flint was healthy and had no underlying health problems before receiving Pfizer’s COVID vaccine.

Within 30 minutes of getting his first dose on Feb. 1, Flint developed a severe stabbing headache that later progressed to a burning sensation in the back of his neck.

“I started developing tunnel vision and my headaches got worse. About two hours after flying, I pulled up my plane to turn around and felt extreme pressure in my ears. Immediately I nearly blacked out, dizzy, disoriented, nauseous, and shaking uncontrollably. By the grace of God, I was able to land my plane without incident, although I don’t remember doing so.

My initial diagnosis of vertigo and a severe panic attack – although I never had either – was later replaced by left and right perilymphatic fistula, Eustachian tube dysfunction, and increased intracranial pressure due to brain swelling. My condition continued to deteriorate and my doctors told me that only a side effect of the Pfizer vaccination or major head trauma could have caused so much spontaneous damage.”

Flint, who is pro-science and pro-vaccine, said the main problem rests entirely on the fact that the U.S. Food and Drug Administration (FDA), Centers for Disease Control and Prevention (CDC), and NIH (National Institutes of Health) refuse to acknowledge that real lives are absolutely destroyed by this vaccine.

“The federal government has not yet helped a single vaccine victim. My understanding was that the federal government would take responsibility for helping people injured by vaccines, given that they gave drug companies full legal immunity from people like me,” Flint said.

Flint said it is time for the government to stop silencing vaccine injuries like his, and it’s unscrupulous for these agencies not to help.

Lt. Col. Theresa Long, a US Army surgeon, said she believes the COVID vaccine poses a greater threat to a soldier’s health and military preparedness than the virus itself.

Long explained that she has been trying to get the military’s senior leadership to educate military personnel about the risks of vaccines, as required by informed consent.

Lt. Col. Theresa Long said she had to ground three of the three pilots in one day due to injuries from COVID vaccination. When she told her chief, her patients were canceled, her records were retrieved, and Long was told she would be seeing no more acute patients — only healthy pilots who needed a routine physical exam.

The criminal record of the American Johnson & Johnson vaccine company

Ernest Ramirez, of Texas, said his only son, 16, collapsed while playing basketball and died of myocarditis after being vaccinated by Pfizer. Ramirez got his son to take the Pfizer vaccine to protect him because he was told that it was the right thing to do.

“My government lied to me. They said it was safe, and now I’m going home to an empty house. They need to stop forcing this on children. I have lost mine and you must protect yours,” Ramirez said.

Ramerez said the vaccine isn’t worth the risks, and all he wants is his son back.

“Don’t make the mistake I made. I did it because I thought it was a great thing to do. It wasn’t.”

“On December 17, 2020, they did a study and they knew it (the COVID vaccine) was causing heart problems in teens. Why was it only released in October of this year of 2021?” asked Ramerez. “This is murder.”

“I love my country,” Ramerez said, “but I don’t trust my government anymore.”

Kyle Werner is a 29-year-old professional mountain bike wicker and three-time National Champion from Idaho who was diagnosed with severe pericarditis after vaccination.

Werner said he got vaccinated because his country asked him to and he believed the vaccine was safe and effective.

“In June, I joined the rapidly growing number of young men who developed pericarditis — inflammation of the lining around the heart — after the mRNA vaccine,” Werner said. “That condition, along with POTS (postural orthostatic tachycardia) and reactive arthritis, completely ended life as I knew it.”

Werner said he has since been bedridden, unable to work, and unable to exercise. He fears his career has “officially come to an end.”

Werner said he is not asking the government to stop the vaccination program, he just wants some transparency and recognition of what is happening so that “we as a country” can have an honest discussion about the risks and decide freely.

“Where there are risks, there must be choices, and without acknowledging that people are seriously injured and dying, we are doing the American people a disservice,” Werner said.

“It is estimated that Moderna and Pfizer will earn $60 billion this year from COVID vaccines,” Werner said. “With the rollout of boosters and mandates, it looks like a lot of that is destined to be recurring revenue.”

Werner suggested earmarking a portion of the profits for research into vaccine injuries and to compensate those injured by vaccines.

Douglas Cameron was a healthy and physically active 64-year-old before receiving the Johnson & Johnson (J&J) jab at work on April 5, 2021. The day after his vaccination, he started experiencing side effects that he thought were caused by the vaccine.

“I lost control of my bladder, developed ED (erectile dysfunction), my legs felt strange, I had a (…) sensation in my hips” and “over the next few days my symptoms worsened and I became anxious.”

Three days later, Cameron told his wife that he felt he had drunk poison. “My whole body felt different,” Cameron said. “I went to bed at 10 pm and woke up paralyzed from the diaphragm at 2 am.”

The pandemic pattern – how the illusion is built

Doctors found that Cameron had a blood clot in his leg and that his entire spinal cord was swollen and bleeding. He was put on a ventilator, spent two weeks in the ICU, and spent 105 days in hospital and rehabilitation centers.

“I’ve had multiple MRIs, CT scans, EKGs, X-rays, spinal angiograms, spinal taps, autoimmune blood tests, muscle biopsies—everything has come back negative with attempts to blame my paralysis on my body and not the J&J vaccine,” said Cameron. “Today, I am an unemployed paralytic who is learning a completely new lifestyle and all I did between my full health and my current condition was take a shot.”

Suzanna Newell, a former Minnesota triathlete, was diagnosed with an autoimmune disease after receiving her second dose of Pfizer on April 13. She now needs a walker to get around.

Since Newell was injured, she has had very little motivation or energy. She is extremely tired, has trouble remembering words, cannot concentrate or focus, has tinnitus, blurred vision, muscle cramps, internal tremors, and joint pain. Newell was diagnosed with small fiber neuropathy, an autoimmune disease, and is now disabled.

“This is not a pandemic of the unvaccinated. This is a pandemic of trauma and injuries caused by vaccines,” said Newell. “We are unnecessarily traumatized by our cases being overlooked, misdiagnosed, lied to, and hidden. We are not believed and our trust in the media and government is wavering.”

Newell said the public has at least a right to know that injuries are a possibility before getting vaccinated. Newell said she was glad she got the vaccine to do her part for her country, but “where is my country now?”

Kelly Ann Rodriguez, a 35-year-old Washington mom, needs a walker after her second dose of Pfizer vaccine on May 5, 2021.

“On June 29, 2021, my normal life came to an abrupt end,” Rodriguez said. “I lost my ability to speak naturally. I can no longer walk without a walker and I don’t know if or when the vibrations will come or go. I can no longer cook, clean, or even pick up or hold my baby for too long before my body begins to tremble uncontrollably or experience excruciating pain.”

“This has become the most lonely and isolating experience in my 35-year life. I’ve come to feel like I don’t matter to the people of western medicine. That I am nothing more than an annoyance and a waste of time. I deserve to be heard and treated with compassion, but instead, I have been called a liar and cheater and have even been told by the emergency room doctors that this is all in my head and that there is nothing medical about it. wrong with me, to the point where they called a social worker to have me evaluated and admitted to a […] psychiatric hospital.

Maddie de Garay of Ohio volunteered for the Pfizer vaccine trial when she was 12. On January 20, 2021, Maddie received her second dose of the Pfizer COVID vaccine as a participant in the 12- to 15-year-old clinical trial and is now a life-long in a wheelchair.

Her disabling side effect of the vaccine has been completely ignored by the FDA, CDC, Pfizer, and the mainstream media.

Maddie and her mother, Stephanie de Garay, also attended Johnson’s June 29 press conference for vaccinated families. De Garay’s mother said that neither Pfizer nor the FDA or CDC contacted her about her daughter’s condition and that Maddie’s adverse reaction was not included in the data Pfizer reported on his clinical trial.

Dr. Joe Wallskog, a Wisconsin orthopedic surgeon, was diagnosed with transverse myelitis after receiving a Moderna vaccination on December 30, 2021. Wallskog has been out of work since attempting to return two weeks after his diagnosis, as he is no longer considered safe to work as an orthopedic surgeon.

“My life has changed drastically after this side effect,” Wallskog said. “The career I had for 19 years, which I studied for 14 years, is probably over.”

Brianne Dressen, a participant in the US AstraZeneca clinical trial, is a co-founder of react19.org – a patient advocacy organization working to raise awareness about side effects.

Dressen attended Johnson’s June 29, 2021 press conference, and her husband made public comments to the FDA during their recent hearing on the authorization of Pfizer’s COVID vaccine for 5 to 11-year-olds.

“The heads of the NIH, FDA, and CDC have had firsthand knowledge of my case and thousands of others,” Dressen said. “These direct reports already started in December of last year (2020). Along with a number of injured doctors, I have continued to approach the FDA via emails and phone calls. We’ve had emails and video conferences with Peter Marks and Janet Woodcock.”

Dressen said she has “repeatedly asked and begged for these side effects to be acknowledged,” but they declined.

“They know that their lack of recognition has created an insurmountable barrier to our ability to receive medical care from physicians who rely on these agencies for information,” Dressen said.

Dressen said US health authorities are aware of the multiple vaccine casualties, deaths, the lack of follow-up to VAERS, childhood injuries, problems with clinical trials, the scientific and media censorship, and mandates imposed on the injured. “They all know,” Dressen said, “and they’ve been doing it for months.”

Dressen said the NIH, an institution many turned to for help, no longer takes calls from people injured by vaccines.

Dressen ended her testimony by sharing a letter from a friend who committed suicide because she could no longer tolerate her COVID vaccination injuries.