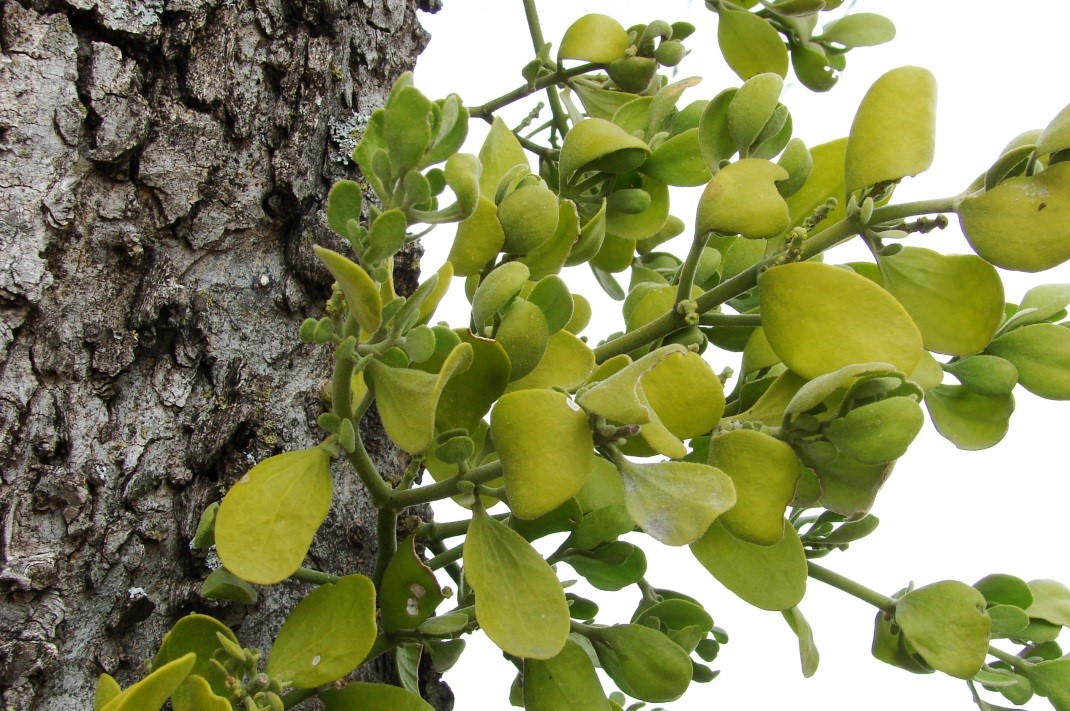 Mistletoe (Viscum album) is the common name for obligate hemiparasitic plants in several families in the order Santalales. These plants attach to and penetrate the branches of a tree through which they absorb water and nutrients from the host plant.

The host tree does not suffer from mistletoe: on the contrary, an older olive tree for instance will bear more olives again after a mistletoe bush has been attached to the tree. The olive tree goes through a long-lasting rejuvenation (“anti-aging”) process. In Humans, it has been demonstrated by several types of research that Viscum album improves DNA repair mechanisms 8-fold and increases the number of telomeres which explains the “anti-aging” effects of this plant 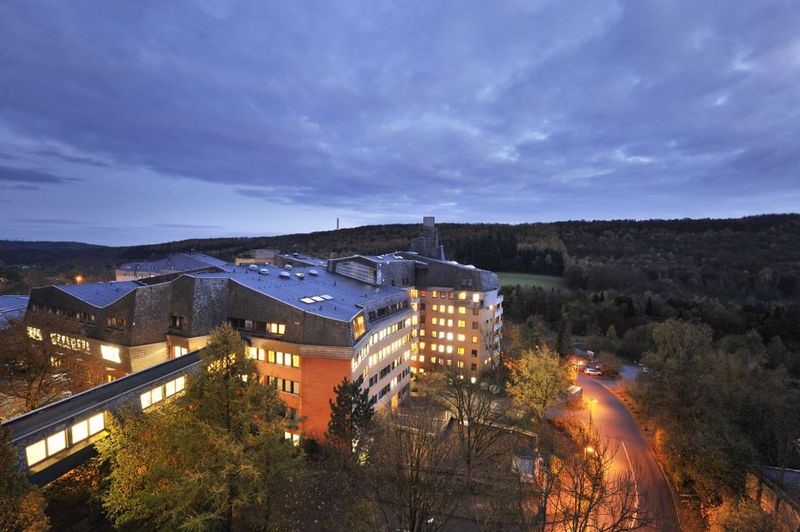 The anthroposophic general hospital in Herdecke (Germany) and one of the teaching hospitals of the University of Witten-Herdecke with 550 beds and 900+ employees. 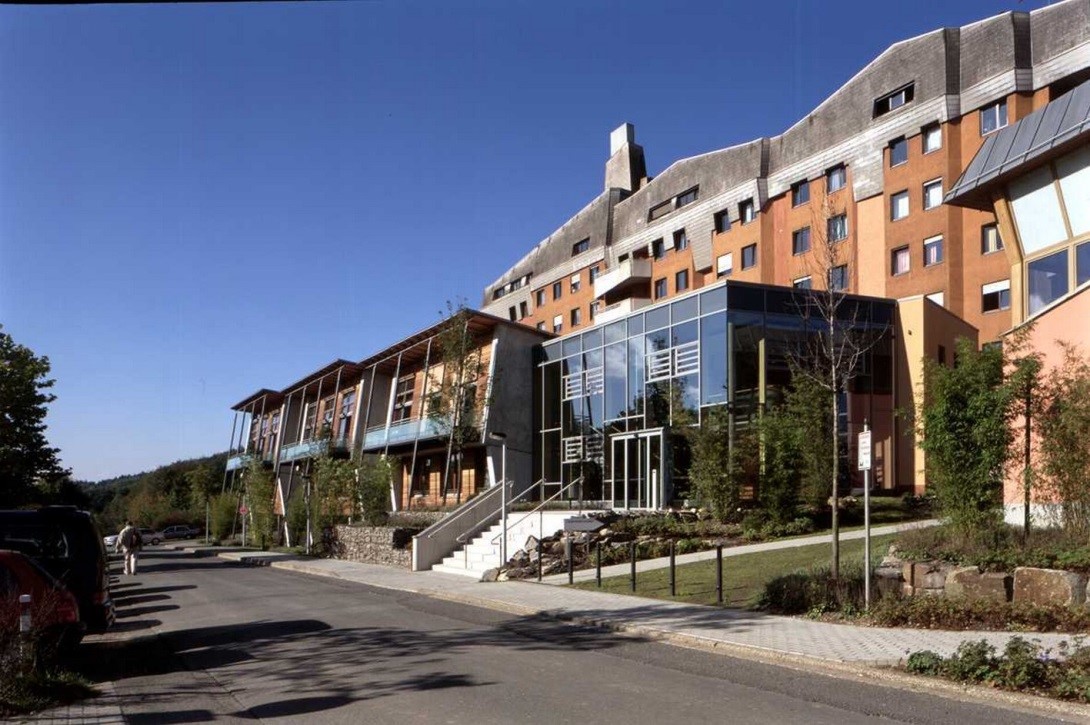 Anthroposophic ambulatory specialty clinics for the larger area of Nordrhein/Westfalen 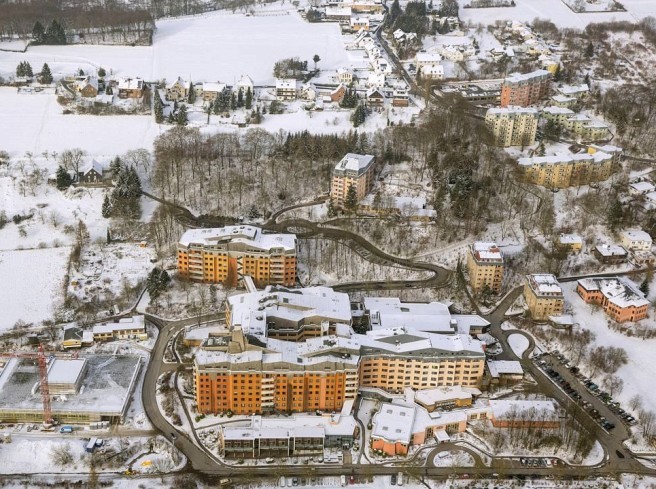 Anthroposophic General Hospital with adjacent buildings in Herdecke during the winter

Havelhöhe community teaching hospital in Berlin-Havelhöhe is an acute care hospital with 350 beds and 590+ employees. It is one of the four major acute Anthroposophic hospitals in Germany that offer not only modern emergency medicine for the regional population but also the additional treatment possibilities of Anthroposophic Medicine including all specialties. 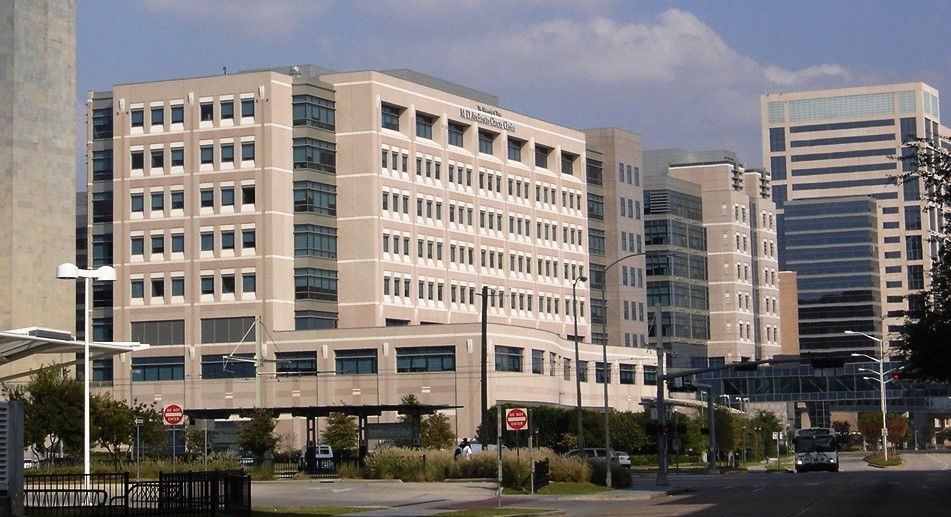 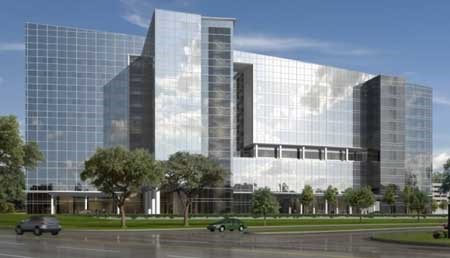 The medical school has been consistently considered in the top-tier of programs in the country. Its Graduate School of Biomedical Sciences is among the top 30 graduate schools in the United States. The National School of Tropical Medicine is the only school in the nation dedicated exclusively to patient care, research, education, and policy related to neglected tropical diseases. 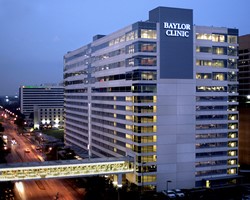 Baylor College of Medicine and teaching hospital (established in 1900)

Recently, researchers like Sen Pathak, at MD Anderson Medical Center in Houston, TX, USA, and others (like Peter Lansdorp, MD, PhD, UK) found that indeed also mammals and humans undergo “anti-aging” when given Mistletoe preparations as an injectable; if applied for at least eight to twelve weeks. It was striking and statistically significant that especially in the elderly patient and volunteers, more telomeres in their peripheral white blood cells appeared. The numbers of telomeres determine the life span of a cell. Essentially, at each cell division, one telomere is lost (sacrificed). Loss of telomeres is correlated with aging and consequent death.

A telomere is a region of repetitive nucleotide sequences at each end of a chromatid, which protects the end of the chromosome from deterioration or from fusion with neighboring chromosomes. Its name is derived from the Greek nouns telos (τέλος) ‘end’ and merοs (μέρος, root: μερ-) ‘part.’

During chromosome replication, the enzymes that duplicate DNA cannot continue their duplication all the way to the end of a chromosome, so in each duplication, the end of the chromosome is shortened (this is because the synthesis of Okazaki fragments requires RNA primers attaching ahead on the lagging strand). The telomeres are disposable buffers at the ends of chromosomes that are truncated during cell division; their presence protects the genes before them on the chromosome from being truncated instead.

Schematic presentation of a telomere

Over time, due to each cell division, the telomere ends become shorter. They are replenished by an enzyme, telomerase reverse transcriptase. Interestingly, certain components of the mistletoe (glycoproteins) protect and even prolong telomeres again and seem to be able to replenish telomeres better than telomerase. 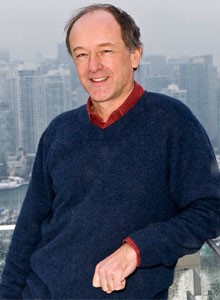 Peter Lansdorp, MD, PhD. (Leading researcher in telomeres from the Netherlands in the UK).

The use of mistletoe extract in the treatment of cancer originated with Rudolf Steiner (1861-1925), the founder of Anthroposophy, and with the Dutch physician Ita Wegman (1876-1943). Steiner compared the semi-parasitic nature of the mistletoe plant to that of cancer and believed that cancer represents a faltering of the body’s immune defenses. Also, plants (trees) can develop cancerous-like growths. A study is underway to observe if trees with mistletoe growing on them have significantly less cancerous growths.

Short telomeres are associated with an increased risk of cancer, but data on telomere length and mortality in breast cancer survivors are inconsistent. In a study reported in the Journal of the National Cancer Institute, Duggan et al found that decreases in telomere length between baseline and 30 months after diagnosis were associated with significantly increased all-cause and breast cancer-specific mortality.

(Catherine Duggan, PhD, of Fred Hutchinson Cancer Research Center, is the corresponding author for the Journal of the National Cancer Institute article.

Also, other studies and observations strongly suggest that the shortening of telomeres is strongly correlated with outcome and survival in all cancer patients.

Mistletoe does not only induce effective DNA repair after chemotherapy and radiation but also repair and increase the number and the length of telomeres.

Kovacs et al. investigated alteration in DNA repair during therapy with an immunomodulator. 14 patients with advanced breast cancer were treated parenterally with Iscador®, an aqueous extract of Viscum album (mistletoe). As a parameter for measurement of DNA repair the incorporation of (3H) thymidine into DNA of unstimulated lymphocytes after ultraviolet light (UV) damage was taken. The DNA repair values in the patients were very low before treatment and on day 1: on average 16% of those in a healthy control population. Values started to increase on day 2 and on days 7-9 were on average 2.7 times higher than before treatment. 12/14 patients showed significant improvement in DNA repair. The values of spontaneous DNA synthesis were not altered during the treatment. We suggest that the increase of DNA repair could be due to a stimulation of repair enzymes by lymphokines or cytokines secreted by activated leukocytes or an alteration in the susceptibility to exogenic agents resulting in less damage. 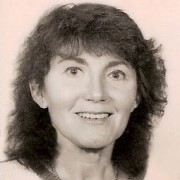 Anthroposophical mistletoe preparations are manufactured and widely available as Iscador® or ABNOBAViscum®. They are applied subcutaneously twice a week. For a number of reasons, at MCC ABNOBAViscum® is preferred above Iscador ® 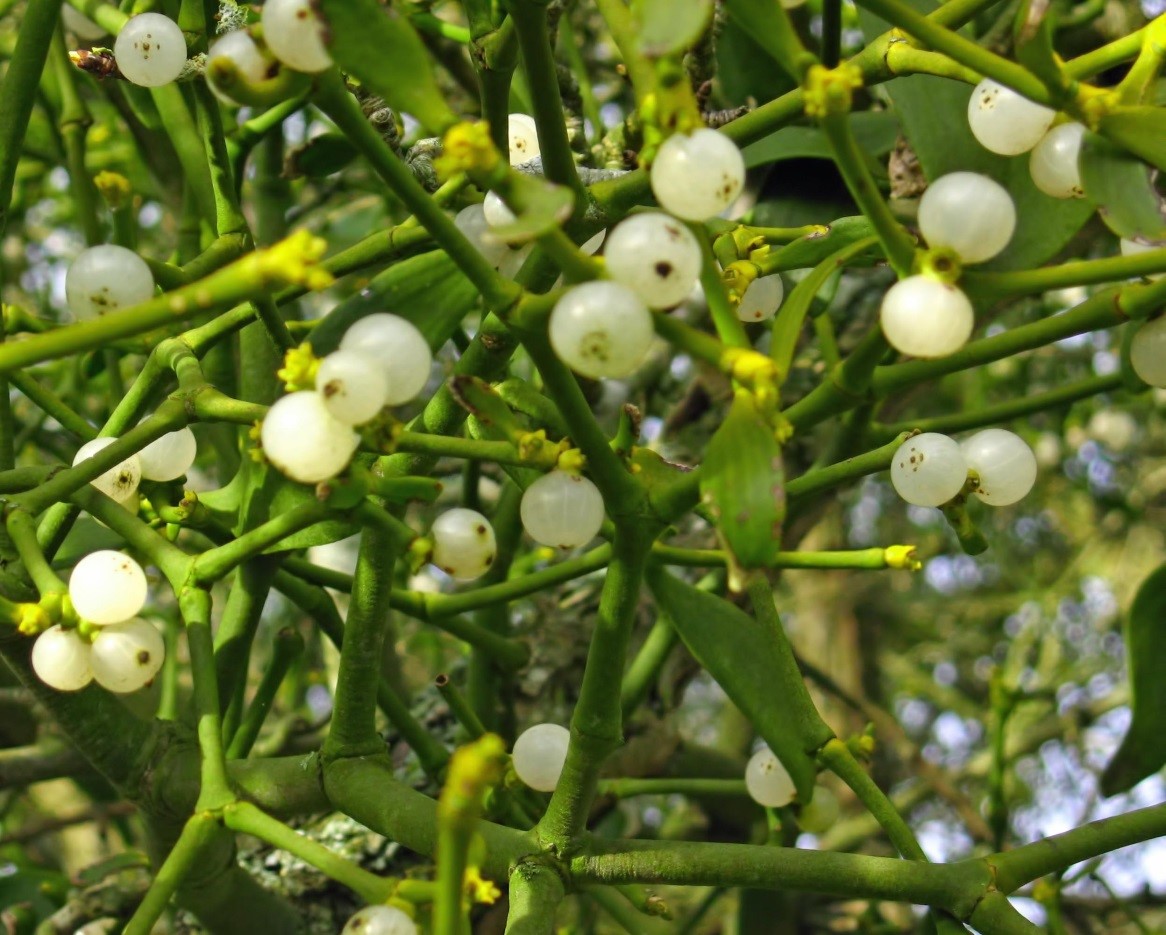 In 1923, it was Rudolf Steiner (1861-1925) and Ita Wegman (1876-1943) who developed mistletoe as an injectable in the treatment of cancer patients. Thus, over the last 90 years, mistletoe preparations have been legally prescribed and used for the treatment of cancer in mainly Central and Northern Europe. Currently, about 60-70% of all cancer patients in these countries receive mistletoe that has been prescribed by their licensed physicians and paid for by the national health insurance systems.

Dr. Robert Gorter and his staff have daily experience in the application of mistletoe and under the guidance of Gorter, as their “Doktorvater,” six young doctors received their PhD title through international and multi-centered clinical trials with Mistletoe, showing great benefit in immune response towards cancer cells and improvement of NK cell function, etc.

In humans and other mammals, DNA damage occurs frequently and DNA repair processes have evolved to compensate. In estimates made for mice, on average approximately 1,500 to 7,000 DNA lesions occur per hour in each mouse cell, or about 36,000 to 160,000 per cell per day (Vilenchik & Knudson, et al. 2000).

In any cell, some DNA damage may remain despite the action of repair processes. The accumulation of unrepaired DNA damage is more prevalent in certain types of cells, particularly in non-replicating or slowly replicating cells, such as cells in the brain, skeletal and cardiac muscle.

In tissues composed of non- or infrequently replicating cells, natural DNA damage can accumulate with age and lead either to loss of cells, or, in surviving cells, decrease or loss of gene expression. Accumulated DNA damage is usually measured directly. Numerous studies of this type have indicated that oxidative damage to DNA is particularly important. The loss of expression of specific genes can be detected at both the mRNA level and protein level.

Components of the mistletoe have been documented to significantly induce DNA repair after radiation and chemotherapy in cancer patients.

In general, one can say that mistletoe enhances DNA repair, prolongs telomeres, and has been documented to even increase the number of telomeres in the elderly. Thus, showing strong anti-aging effects which have often been observed clinically. 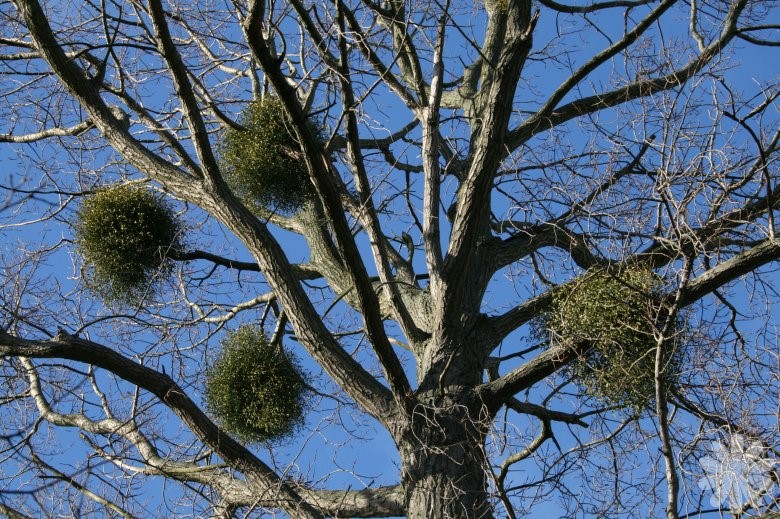 Commentary to anti-aging effects of Mistletoe

Already since the early 1990s by various researchers like Eva Kovacs at the University of Basel, Switzerland, it was documented independently of each other that the European mistletoe increases DNA repair.

Recently, it has been shown that mistletoe also protects telomeres from degrading and some studies even show that the length of telomeres increases again after a few months into treatment and a situation like one would expect in children and adolescences is restored. 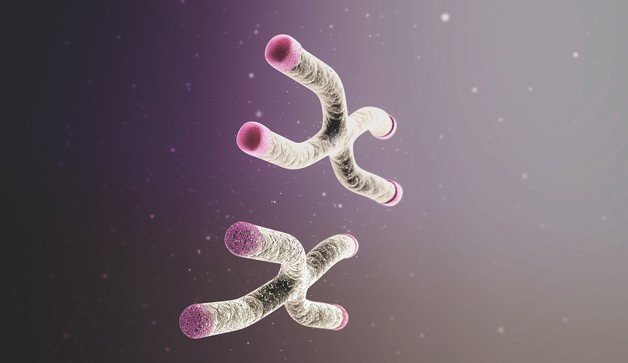 Telomeres are like the little caps at the ends of shoelaces that prevent the laces from unraveling. In this case, they prevent rod-like chromosomes from fraying and tangling with other chromosomes. Without telomeres, genetic information would degrade, causing cells to malfunction, increasing the risk of disease, or even hastening death. Every time a cell replicates, its telomeres get a little shorter. Years of replication can eventually wear telomeres down so far that cells can’t replicate anymore, and they become dormant or die. As more tissues have trouble rejuvenating, the body follows the cells, aging and eventually breaking down. In short, cells have an aging clock built into them. But one’s chronological age in years doesn’t set the clock—one’s biological age in telomere length does.

The European mistletoe (Viscum album) has been documented to:

1)      Significantly restore and improve DNA repair after radiation and chemotherapy in cancer patients (up to 8 times on average).

3)      Increase length of telomeres in cancer patients in remission, and healthy individuals up to old age: >75 years (Anti-Aging)

4)      Viscum album is part of the Gorter Model to restore the immune system and overcome the negative effects of chemotherapy and radiation.