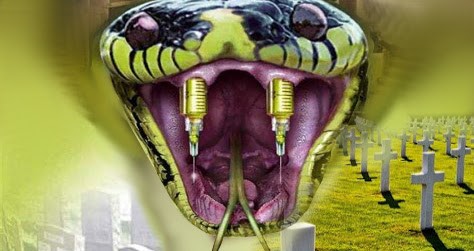 One America News Network reports that official data from VAERS shows that the Covid injections are already directly responsible for more than 300,000 deaths in the US. Meanwhile, “hundreds of thousands of people have lost their jobs or been fired simply because they demand that their rights and personal freedoms are respected,” the station reported. “And that’s no surprise given the mounting evidence that the vaccines for the coronavirus are not only unproven but are now proving to be actually dangerous and killing many.”

“Our goal is to educate people about the safety of these vaccines,” Steve Kirsch, founder of the Vaccine Safety Research Foundation, told OAN. ‘What brought us here: the numbers of injuries and deaths that occur after being vaccinated. After I have vaccinated myself, I started hearing all kinds of stories of people getting sick or dying from these vaccines. The most extreme example was a friend in Sweden. Three of his healthy relatives died within one week of receiving their vaccination.’

Kirsch recently testified to the FDA about his findings, expressing concern about the tax obligations. While current vaccines are promoted by government agencies such as the CDC ( and RIVM in the Netherlands ), Kirsch says his research has provided alarming evidence of (the data from) the same agencies. This shows that vaccines are responsible for a staggering number of deaths.

‘If you look at the data from VAERS – the official registration body for vaccination side effects – there are more than 7,500 deaths there. But the VAERS system has – based on the methodology of the CDC – an underreporting of 40 to 1 (according to a Harvard study from a few years ago, even 100 to 1!!!).

The Dutch entrepreneur and statistical analyst Eric Boomsma recently came to the conclusion using the same method that at least 450,000 deaths must have been caused by these injections in the EU by mid-October 2021. (See the Café Weltschmerz video below). Added together, there would have been about three-quarters of a million deaths from Covid vax victims in the US and the EU, making the term ‘genocide’ more than appropriate.

What’s most frightening about this is the high toll these injections take on American children, Kirsch argues. With exceptions such as children with existing serious immune disorders, they were actually completely immune to the coronavirus and did not get sick from it, if at all. Several doctors, including pediatricians and heart specialists, say that four times more children end up in ICU with the annual flu than with Covid-19.

Despite that very low risk, the Covid injections are still given to children from age 6. The unreliable VAERS data shows that for every 1 million ‘vaccinated’ children, 30 die. The government now wants to inject 28 million children aged 5 to 11 years. According to statistics, that could potentially save the lives of 14 children. At the same time, the same ‘vaccines’ are then directly responsible for the deaths of more than 800 children.

Kirsch: ‘It is tragic that we harm our children. The numbers with myocarditis are many times higher than the FDA and CDC admit. The damage done to these children is permanent. They may be in the hospital for less than a week, but many of these children with this diagnosis can die within 5 years. We will know for sure in 5 years. What we are causing now is tragic.’

Balance is also negative for the elderly: for One saved, Two got killed.

The VAERS data also show that for every ‘rescued’ older person, two die from the injection. The data on the number of vax deaths comes from the CDC’s own website, which requires doctors and hospitals to register the number of deaths. These numbers show a dramatic spike in deaths from the Covid ‘vaccines’. The number of adverse side effects and deaths in all age groups is already higher than all other 70+ vaccines in the past 30 years combined.

“This is extreme,” Kirsch comments. “This vaccine is much, much more dangerous than anything we’ve seen in the last 30 years. This goes beyond all limits.’

The commentator concludes: “Unless America stands up for the freedom to make its own health care choices, we could see a catastrophic increase in deaths in the next 5 years. All thanks to this hastily printed, untested, unproven, and extremely unsafe vaccine.” (1)

It will not be necessary to explain to few that the increasingly coercive imposition of these injections amounts to very serious crimes against humanity – and if the numbers that Kirsch and Boomsma’s mention are even approximately correct, even genocide – that all responsible and cooperating politicians, parliamentarians, can – and should – land scientists, advisers and media managers in the dock of a war crimes tribunal.