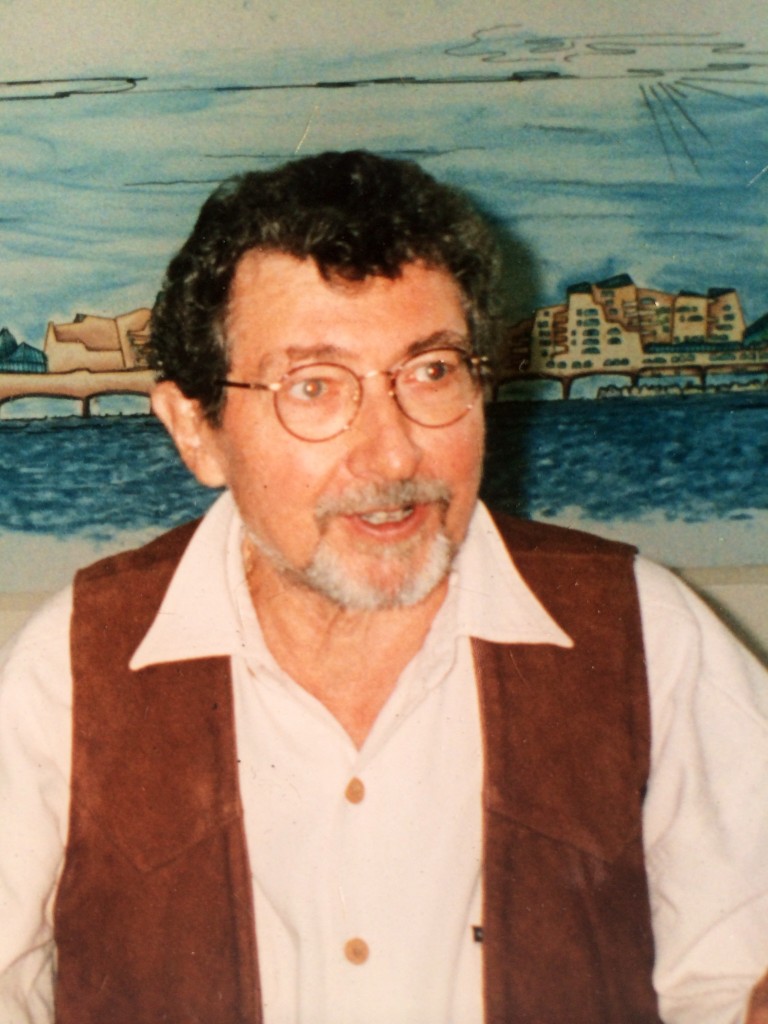 Ton Alberts was a very good friend of Robert Gorter. They met in the late 1960’s in Amsterdam because of their common interests in applied spirituality like in organic architecture and sustainable building and maintenance.  Ton Alberts was a gifted architect and visionary. Robert Gorter and Ton Alberts spent many evenings in his house in the very center of Amsterdam. His wife would usually cook (vegetarian) and his three children were usually present for dinner. One day in September 1973, Ton Alberts and Robert Gorter travelled together in his care to Dornach in Switzerland. Ton for a five- day seminar for architects interested in organic architecture and Rudolf Steiner views on it. Robert left Amsterdam that day to attend a three-months course on Anthroposophical Medicine and Oncology at the Lukas Klinik in Arlesheim (next door to Dornach). Since then, they stayed in close contact. In the mid 1980’s he was diagnosed as living with chronic lymphatic leukemia (CLL). He was initially treated at the Amsterdam Medical Center (AMC)  but usually, CLL progresses rather slowly and usually the first step is to closely watch with monthly check-ups (simple blood draws). He started to take Iscador (mistletoe preparation) and did well for years. One day, he got terrible abdominal pains and high fevers. He went to AMC and he was admitted right away. Since he was diagnosed with CLL and that was mentioned in the medical records, all medical staff linked his symptoms to an acute exacerbation od his leukemia. Unfortunately, he has a gall bladder infection with an abcess that burst. He died within two days by the pus and free bile in the abdomen. If he had been diagnosed better, very likely, he would have been still alive. The commentary by the medical staff to the widow was: “we did everything we could”.

Anton (Ton) Alberts was a Dutch architect best known for the ING Bank (1982) in the Bijlmer district of Amsterdam and the Gas Corporation headquarters in Groningen.

Alberts was involved with Situationist International before being expelled in 1960. He had been involved with fellow Situationists Constant and Har Oudejans in setting up a labyrinth in the Stedelijk Museum of Amsterdam, but the project fell apart amidst acrimony. Officially, he was expelled for designing churches, although Asger Jorn relates the expulsion more to the “Amsterdam affair.”

In 1963, he founded the firm Alberts and Van Huut with Max van Huut, guided by the principles of Organic architecture. His work also has its roots in the Anthroposophical architecture of Rudolf Steiner (1861-1925). 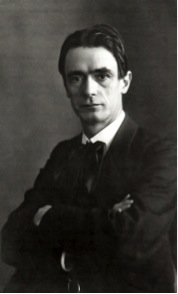 Rudolf Steiner, PhD, (1861 – 1925) was an Austrian philosopher, social reformer, architect, school-reformist (Waldorf Education), environmentalist, and esotericist. Steiner gained initial recognition at the end of the nineteenth century as a literary critic and published philosophical works including The Philosophy of Freedom. At the beginning of the twentieth century, he founded a spiritual movement, anthroposophy, with roots in German idealist philosophy; other influences include Goethean Sciences and Rosicrucianism.

In 1978 the NMB (now ING) bank decided to build a new head office. After a preliminary selection, the commission amazingly went to the architect Ton Alberts, famous for his organic buildings and Anthroposophical ideas, whose work had until then been largely confined to housing and small-scale social and cultural projects. The final result is a unique building whether in terms of architecture, building physics or social set-up; there is nothing like it anywhere in the world. Regarded skeptically by colleagues and critics it may be, but the public at large has a high regard for this ‘fairytale castle’. The brief’s main points of departure were that the building be functional, flexible and energy-efficient. The traditional bank image of respectability and a sense of tradition were never expressed like this before. Ten tower-like clusters of unequal height are linked at ground level by an internal street. In each cluster, an office floor comprises five work units of 88 square meters and so much meeting space about a void. Upstairs, the clusters are separated by lifts and emergency stairs. The free, oblique forms inside and out are the very nub of the design, in the architect’s view helping the building’s users to be freer and more creative in their work. These shapes, though, are also functional as regards admitting daylight, reducing traffic noise and improving internal acoustics. The forms are, besides, structurally logical and the heavy, solid inner leaf of the cavity wall is in its role of accumulator, a major contributor to energy efficiency. The windows are relatively small. Even though the energy efficiency in fact falls somewhat short of the ambitious expectations, the actual energy used is still extremely low. The general amenities are ranged along the internal street. Natural materials such as stone and wood are exploited in the interior. Each void has its own color; here water features and plants dictate the ambience, with artworks fully integrated into the building. Beneath the NMB building, which boasts 34,000 square meters of office space for 2500 bank officials, are two levels of parking space. Outside, the cladding is predominantly Dutch tradition brick combined with brown precast concrete lintels and blue aluminum window frames. The lozenge-shaped windows in the copper roofs are remarkable in themselves. 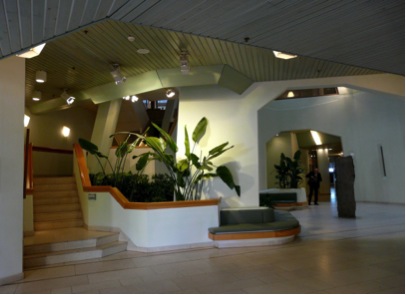 Inside the ING Bank on the first floor 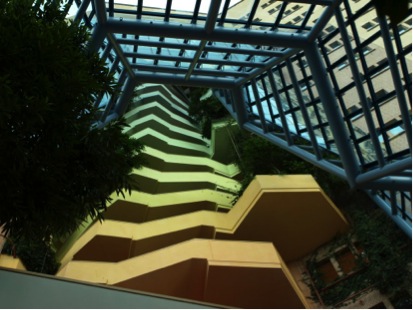 One of the many stairways with in the railings water flowing like in little creeks, providing optimal air conditions and the sound of running water everywhere. 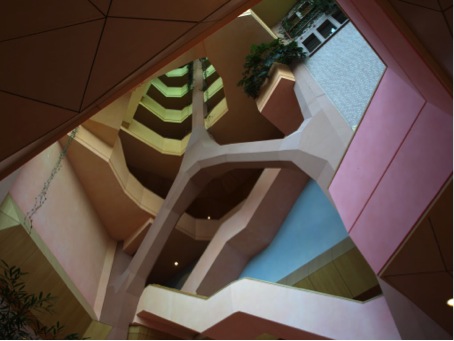 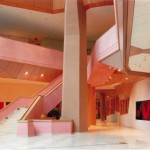 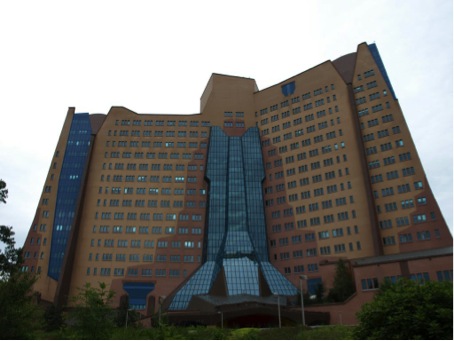 Headquarters of the Nederlandse Gas Unie in Groningen 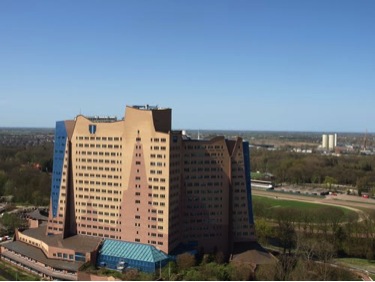 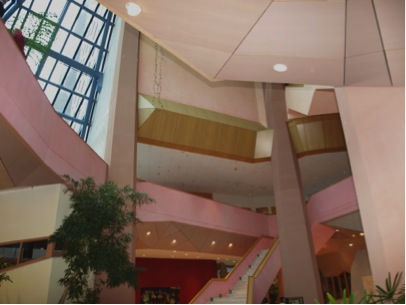 Inside the Headquarters of the Nederlandse Gas Unie in Nederland 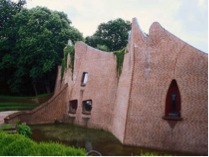 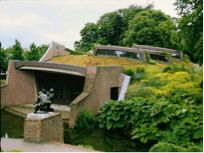 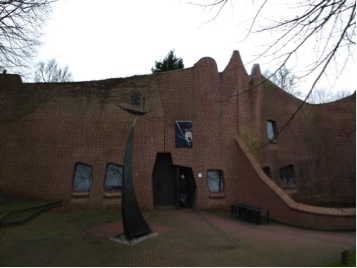