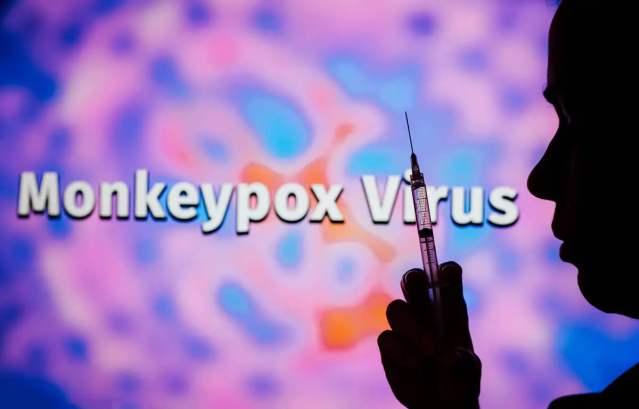 If you believe in germ theory then you will be shocked to find that a new study, published by Portugal’s National Institute of Health has uncovered evidence that the alleged virus responsible for the Monkeypox outbreak supposedly sweeping across Europe, America, and Australia, has been heavily manipulated in a lab by scientists, and further evidence suggests it has been intentionally released.

Monkeypox illness usually begins with a fever before a rash develops one to five days later, often beginning on the face and then spreading to other parts of the body. The rash changes and goes through different stages before finally forming a scab which later falls off. An individual is contagious until by direct contact and all the scabs have fallen off and intact skin is underneath.

The disease has always been extremely rare and was first identified in humans in 1970 in the Democratic Republic of the Congo in a 9-year-old boy. Since then, human cases of monkeypox have been reported in 11 African countries. It wasn’t until 2003 that the first monkeypox outbreak outside of Africa was recorded, and this was in the United States, and it has never been recorded in multiple countries at the same time. Never ever were severe side effects or deaths reported.

Suddenly, we are being told that cases of monkeypox are now being recorded in the USA, Canada, the UK, Australia, Sweden, the Netherlands, Belgium, France, Spain, Italy, and Germany: all at the same time. 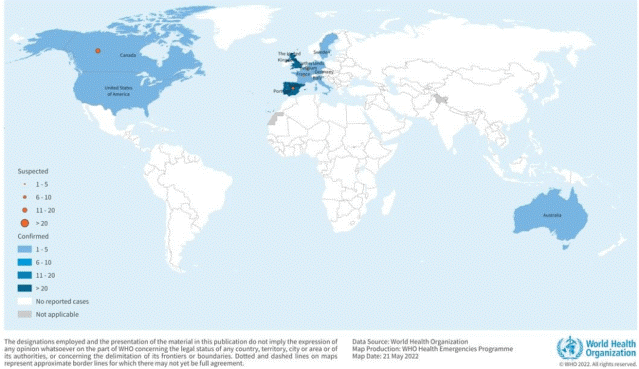 According to the UK Health Security Agency, 172 cases of monkeypox were identified in England as of the week ending 29th May 2022 and they released new guidance advising anyone with the virus to abstain from sex whilst they have symptoms, and to use a condom for at least eight weeks once the infection has cleared.

But there’s something extremely strange about this outbreak as if the fact we are allegedly witnessing an outbreak across first-world countries all at the same time for the first time in history wasn’t strange enough.

We don’t believe in coincidences, but there are many people that do. But we imagine those will do will struggle to comprehend this one:

Back in March 2021, the Nuclear Threat Initiative (NTI) partnered with the Munich Security Conference to conduct a tabletop exercise on reducing high-consequence biological threats.

Here’s the scenario that they conducted: 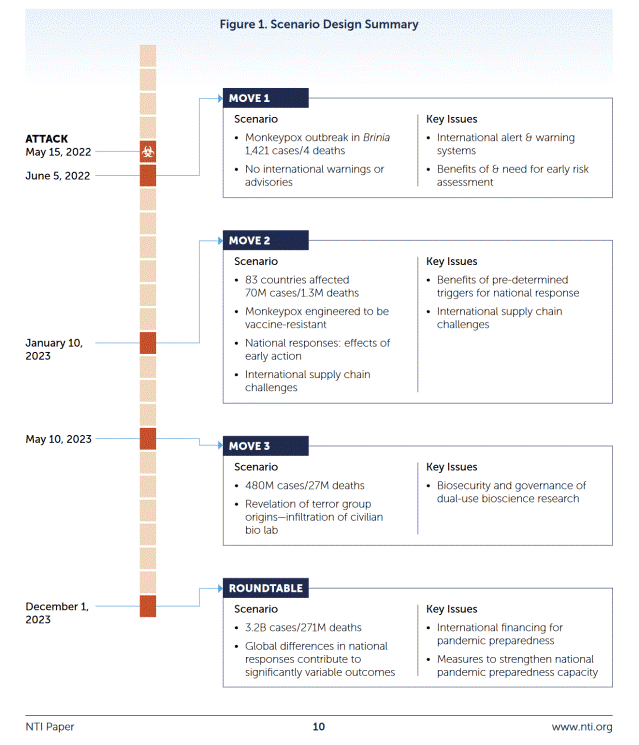 Are we really to believe it just a coincidence that we are now witnessing an actual monkeypox outbreak, with the first cases being reported to the World Health Organisation on May 13th, 2022? 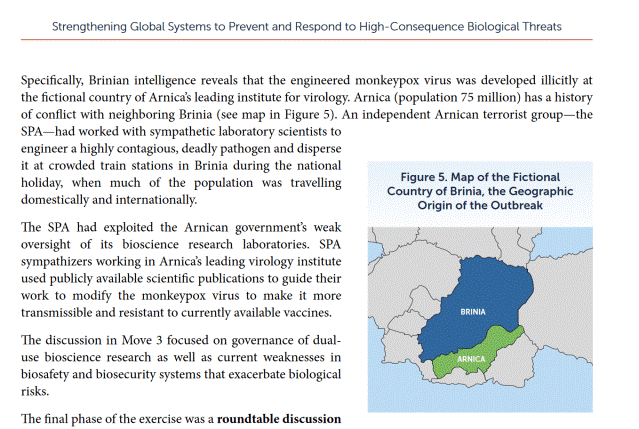 The Munich Security Conference exercise revealed that the engineered monkeypox virus was developed illicitly at the fictional country of Anica’s leading institute of virology by lab scientists working alongside an Arnica terrorist group. This terrorist group then released the “highly contagious and deadly” pathogen at a crowded train station in the neighboring fictional country Brina.

Now, a new scientific study published by Portugal’s National Institute of Health (NIH) strongly suggests that the real-world monkeypox outbreak may be the result of something eerily similar.

Scientists from the NIH collected clinical specimens from 9 monkeypox patients between May 15th and May 17th, 2022, and analyzed them.

The scientists concluded that the multi-country outbreak of monkeypox that we arere now allegedly witnessing is most likely the result of a single origin because all sequences of viruses released so far tightly cluster together. 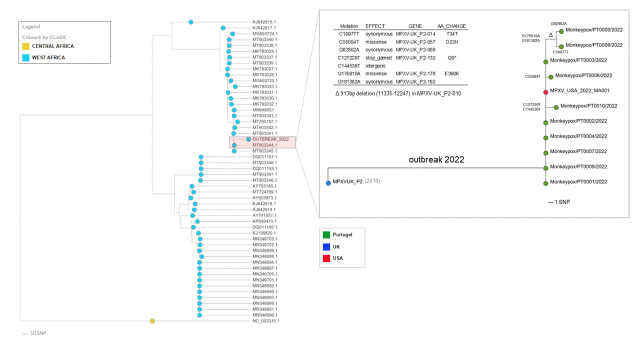 They also concluded that the virus belongs to the West African clade of monkeypox viruses. However, they found it it is most closely related to monkeypox viruses that were exported from Nigeria to several countries in 2018 and 2019, namely the UK, Israel, and Singapore. This is our first clue that this latest outbreak may be the result of an engineered virus leaking from a lab („Gain-function“).

The next piece of evidence that this virus has leaked from a lab comes with the finding that whilst the virus closely resembles those exported from Nigeria in 18/19, it is still different with over 50 single nucleotide polymorphisms (SNPs), which are genetic variations. The scientists state this is far more than one would expect. This strongly indicates that somebody somewhere has been playing with this virus in a lab.

The final findings of the study are written in a way that is hard to get your head around, as follows: 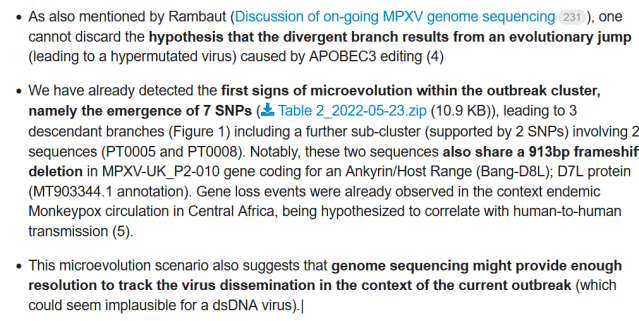 But thankfully someone who has managed to get their head around the above is none other than Dr. Robert Malone.  Malone has provided an easy-to-understand breakdown of what the Scientists are attempting to declare above:

“The authors speculate that the pattern of mutations is consistent with the effects of a natural cellular protein with the abbreviated name: APOBEC3. For those who want to dive into the molecular virology of APOBEC3, here is a nice 2015 J Immunology review.

For those seeking the “Cliff Notes” abridged version, see Wikipedia. For the obsessives or aficionados, note that APOBEC3 is associated with a specific pattern of base changes- (C→U). On the basis of their hypothesis regarding the potential role for APOBEC3, I infer that the authors must have detected a statistically significant fraction of C→U changes in the current isolates relative to the 2018-2019 isolates.#

Here is the rub. While APOBEC3 is associated with cellular resistance (yet another form of “innate immunity”) to HIV (and presumably other retroviruses), a quick PubMed search reveals that Poxviruses are resistant to the mutational effects of APOBEC3!

For example, see this 2006 paper published in “Virology”. Frankly, whether through lack of curiosity or fear of attack from government-controlled media and journals, the failure of the authors to even mention this Virology article is a major oversight at best.

Our inference and interpretation of?

„On the basis of this sequence analysis report from the INSA team cited above, to me, like in the case of COVID-19, this is looking very much like a laboratory manipulated strain than a naturally evolved strain. Bad news.

Furthermore, this double-stranded DNA virus, infections by which have historically been self-limiting, appears to be evolving (during the last few days!) to a form that is more readily transmitted from human to human.

This newly published scientific study has essentially uncovered a mass of evidence pointing to the latest monkeypox outbreak being the result of a heavily manipulated virus that has leaked intentionally, like COVID-19, from a bio lab (Gain-of-Function)

Couple this with the Munich Security Conference simulation conducted in March 2021 that just so happened to revolve around a monkeypox outbreak beginning in May 2022 as the result of a bioterrorist slab leak, then it’s not hard to conclude that we are either witnessing a real-life monkeypox outbreak that has been purposely released from a lab or one hell of an amazing and practically impossible coincidence. And we do not believe in the latter.