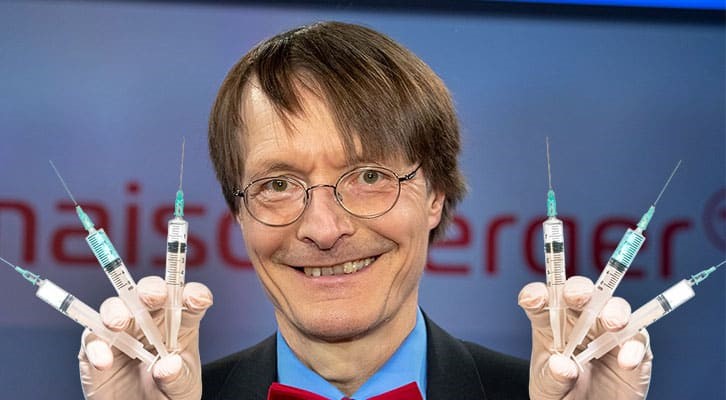 Health Minister of Germany Karl Lautenbauch, who even claimed to protect oneself from Monkey Poxvirus, should wear facial masks although the virus is 100% sure not transmitted by aerosols (like cold and flu viruses)

Right now, reports are pouring in of – often fatal – vaccine injuries: “Suddenly and unexpectedly” athletes, professionals, or even vacationers with no previous illness collapse at a young age and die of myocarditis and thrombosis (being on the weekends alone). Italian beaches 11 people died in 24 hours). Even experts close to the government and the Permanent Commission on Vaccination (Stiko) doubt the usefulness of the fourth vaccination. But the German government and pharmaceutical lobbyist Karl Lauterbach as Minister of Health does not want to hear about this.

He is determined to live even more unrestrainedly on his delusion of closing the “vaccination gap” and is serious about getting “50 to 60 million people vaccinated this fall,” Wochenblick reports. To put this into perspective, in Germany so far 63.4 million people have been vaccinated at least twice, 51.4 million people even at least three times. They should all get the fourth shot – and of course, children and young people should get the needle too.

And all that, mind you, for a completely banal cold that leads to no more rare serious symptoms than the flu that we never thought about before 2020. But because vaccination has long been ideological, not to say religiously charged, rationality as an argument has, unfortunately, had its day. But not only new mass vaccinations, but absurdly excessive, advancing restrictions on freedom, including new discrimination against the unvaccinated, await us this winter.

Return of the 1G rule

The agreement on the return of the mandatory masks was already informally reached over the weekend (with the FDP once again bowing to the knees as a caricature of a “liberal” party) – and now the representatives of the committee of experts are also proposing to introducing the “1G rule” for major events during the “Corona season” (note the term framing!). This would mean that every visitor, even if he has been vaccinated, must be able to present a recent negative test. In this way, artificially tested incidents are ensured, with which the entire theater remains justified.