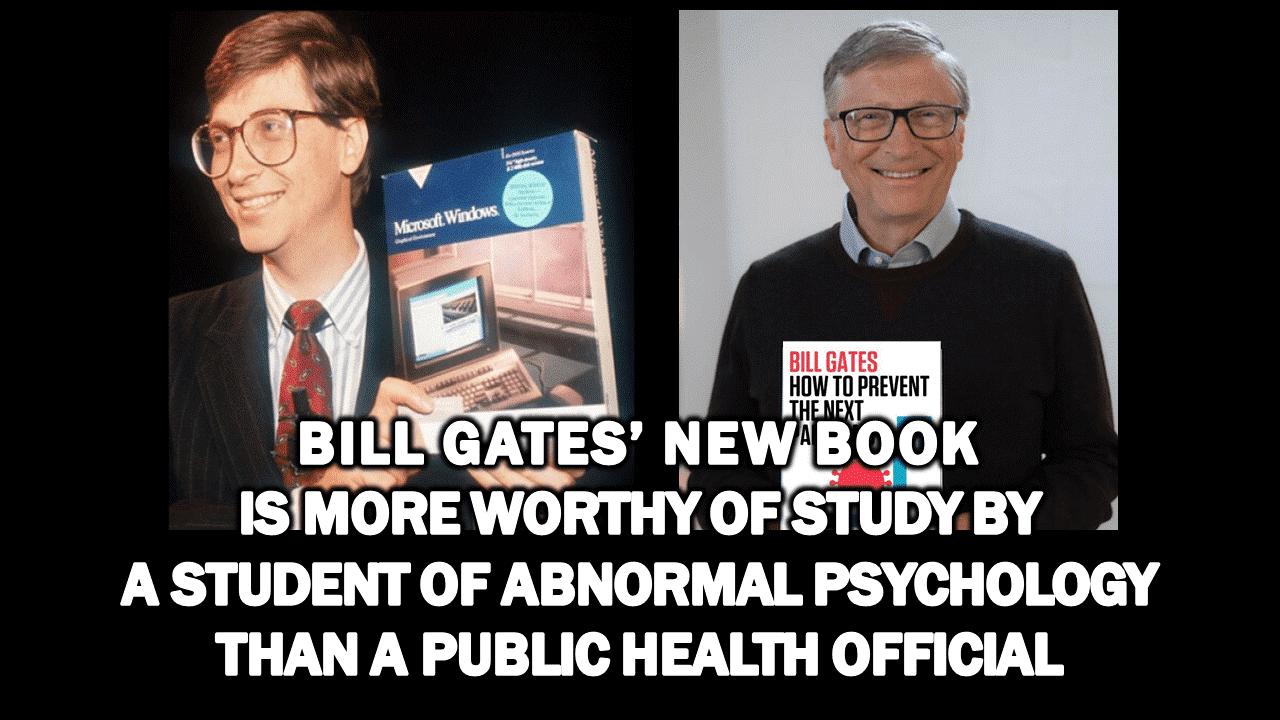 It’s interesting and weird for a few minutes. But one gradually comes to realize that Bill Gates is actually crazy and a maniac. „His main point is wrong and so his solutions are wrong too,“ Brownstone Institute wrote of Bill Gates’s new book ‘How to Prevent the Next Pandemic’.

The main theme is implied in the title. With enough money, intelligence, and power, along with technological know-how at the helm, the next pathogen to come along can be stopped in its tracks. Where the bug goes after that he never explains. Presumably, it just disappears. Like a computer virus, it exists but doesn’t ruin your hard drive completely.

What are the historical examples of such a thing? There are none via avoidance, testing, contract tracing, and control of the human population. This theory of virus control – the notion that muscling the population makes a prevalent virus shrink into submission and disappear – is a completely new invention, the mechanization of a primitive instinct. 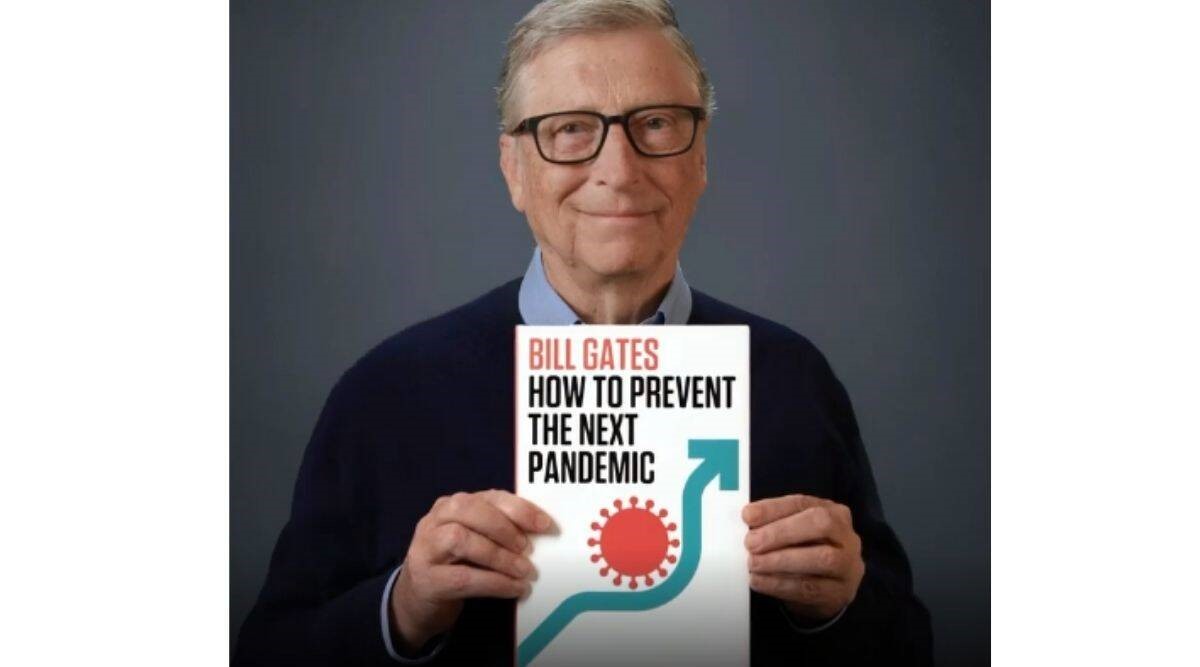 Eradication is not the same thing as perpetual pathogenic avoidance. The former is great but the latter is deeply dangerous: the only thing more dangerous to human life than governments is a naive immune system. Gates’ plan, even if it had a chance of working which it does not, could create exactly that. Not understanding the difference is an egregious intellectual error.

The error here probably traces to Gates’ fundamental confusion. He doesn’t say this in the book but it becomes very apparent that he thinks a biological virus works just like a computer “virus.”  He wants to scrub the human body the way he worked to scrub the Windows operating system. It’s the kind of basic error anyone would make who has surrounded himself with sycophants for the better part of his career.

If you understand this one simple point about Gates’s thinking, you get the entire book. All that matters is avoidance. The more avoidance the better. There is no such thing as being too free of pathogenic exposure. To him, the single goal of all public health is to keep the population away from as many germs as possible. 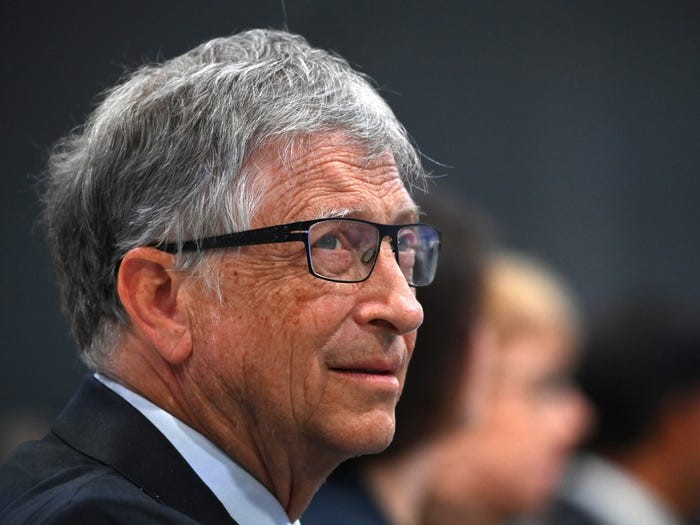 „I am sorry to report that the entire book is a study in mysophobia, more worthy of study by a student of abnormal psychology than a public health official, much less a scientist,“ wrote Brownstone.

Even though lockdowns have clear benefits for public health, it’s not always clear whether in lower-income countries they are worth the sacrifice. In such places, closing down sectors of the economy can lead to acute hunger, drive people into extreme poverty, and increase deaths from other causes. If you’re a young adult and spend your day working outside—as many people in low-income countries do—Covid will not seem as scary as the possibility of not having enough food to feed your family.

The human suffering caused by these separations is incalculable, literally—no one can put a number on the pain of not being able to say goodbye in person. But the policy saved so many lives that it will be worth adopting again if the circumstances call for it.

Lockdowns are a great example. The evidence is clear that they reduce transmission and that stricter lockdowns reduce transmission more than looser ones do. But they’re not equally effective everywhere, because not everyone is able to comply by staying in one place.

This Graph is the kind of „Science“ Bill Gates propagates and wants the world to believe: it reflects his opinion but independent scientific literature opposes his simple „Sales Techniques.“

Lockdowns may not be necessary for places where the disease burden is modest. They’re also more effective in countries where residents have less of a voice in the country’s affairs, and the government is in a position to strictly enforce lockdowns and other mandates. What this all means is that there is no single ideal mix of NPIs that works equally well everywhere.

This is good news because NPIs are our most important tool in the early days of an outbreak. There’s no lab time required to put mask mandates in place (assuming we can provide the masks), figure out when to cancel big public events, or limit how many people can sit in a restaurant.

The pandemic forced us to rethink what is acceptable for many activities. Digital alternatives that were once viewed as inferior were suddenly seen as preferable.

It’s stunning how little we know about superspreaders. What role does biology play? … There’s also certainly a behavioral component … Superspreaders is one of the mysteries of disease transmission that needs a lot more study.

The quick rollout of PCR tests and quarantine policies explains in large part why some countries, such as Australia, had dramatically fewer infections and excess deaths than others.

This is a little hard to admit because the power of inventing things is so central to my worldview, but it’s true: We may never devise a cheaper, more effective way to block the transmission of certain respiratory viruses than a piece of inexpensive material with a couple of elastic straps sewn onto it.

The real benefit comes with universal masking, where both people are double masking or improving the fit of their surgical masks: It reduces the risk of exposure by 96 percent.

If everyone had masked up early on … it would have blunted the spread of Covid dramatically.

To me, wrote Brownstone, he seems to be saying that in an ideal world, we would live with rolling lockdowns forever, on the say-so of experts in his pay. Indeed, he proposes the creation of a new division of the World Health Organisation, staffed with 3,000 employees.

“I call it the GERM—Global Epidemic Response and Mobilisation—team, and the job of its people should be to wake up every day asking themselves the same questions: “Is the world ready for the next outbreak? What can we do to be better prepared?” They should be fully paid, regularly drilled, and prepared to mount a coordinated response to the next threat of a pandemic. The GERM team should have the ability to declare a pandemic and work with national governments and the World Bank to raise money for the response very quickly.”

Just in case you think this is about helping sick people to get well, Gates corrects you: “You might have noticed one obvious activity that’s missing from GERM’s job description: treating patients. That’s by design.”