Modelers Were ‘Astronomically Wrong’ in COVID-19 Predictions, Says Leading Epidemiologist—and the World Is Paying the Price

In a recent interview, Dr. John Ioannidis had a harsh assessment of modelers who predicted as many as 40 million people would die and the US healthcare system would be overrun because of COVID-19. 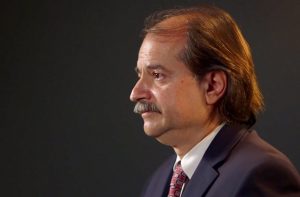 Dr. John Ioannidis became a world-leading scientist by exposing bad science. But the COVID-19 pandemic could prove to be his biggest challenge yet.

Ioannidis, the C.F. Rehnborg Chair in Disease Prevention at Stanford University, California, has come under fire in recent months for his opposition to state-ordered lockdowns, which he says could cause social harms well beyond their presumed benefits. But he doesn’t appear to be backing down.

In a wide-ranging interview with Greek Reporter published over the weekend, Ioannidis said emerging data support his prediction that lockdowns would have wide-ranging social consequences and that the mathematical models on which the lockdowns were based were horribly flawed.

Ioannidis also said a comprehensive review of the medical literature suggests that COVID-19 is far more widespread than most people realize.

“There are already more than 50 studies that have presented results on how many people in different countries and locations have developed antibodies to the virus,” Ioannidis, a Greek-American physician, told Greek Reporter. “Of course none of these studies are perfect, but cumulatively they provide useful composite evidence. A very crude estimate might suggest that about 150-300 million or more people have already been infected around the world, far more than the 10 million documented cases.”

Ioannidis said medical data suggest the fatality risk is far lower than earlier estimates had led policymakers to believe and “is almost 0%” for unvaccinated individuals under 45 years old. The median fatality rate is roughly 0.25 percent, however, because the risk “escalates substantially” for individuals over 85 and can be as high as 25 percent for debilitated people in nursing homes with major underlying disease(s).

“The death rate in a given country depends a lot on the age-structure, who are the people infected, and how they are managed,” Ioannidis said. “For people younger than 45, the infection fatality rate is almost 0%. For 45 to 70, it is probably about 0.05-0.3%. For those above 70, it escalates substantially…”

Because of this, Ioannidis sees mass lockdowns of entire populations as a mistake, though he says they may have made sense when experts believed the fatality rate of COVID-19 was as high as 3-5 percent.

In March, in a widely read STAT article, Ioannidis said it was uncertain how long lockdowns could be maintained without serious consequences.

“One of the bottom lines is that we don’t know how long social distancing measures and lockdowns can be maintained without major consequences to the economy, society, and mental health,” Ioannidis wrote. “Unpredictable evolutions may ensue, including financial crisis, unrest, civil strife, war, and a meltdown of the social fabric.”

Nearly three months after that interview, the world has seen unemployment levels unseen since the Great Depression, mass business closures, spikes in suicide and drug overdose, and social unrest on a scale not seen in the US since the 1960s.

“I feel extremely sad that my predictions were verified,” Ioannidis said. He continued:

“Major consequences on the economy, society and mental health” have already occurred. I hope they are reversible, and this depends to a large extent on whether we can avoid prolonging the draconian lockdowns and manage to deal with COVID-19 in a smart, precision-risk targeted approach, rather than blindly shutting down everything. Similarly, we have already started to see the consequences of “financial crisis, unrest, and civil strife.” I hope it is not followed by “war and meltdown of the social fabric.” Globally, the lockdown measures have increased the number of people at risk of starvation to 1.1 billion, and they are putting at risk millions of lives, with the potential resurgence of tuberculosis, childhood diseases like measles where vaccination programs are disrupted, and malaria. I hope that policymakers look at the big picture of all the potential problems and not only on the very important, but relatively thin slice of evidence is that COVID-19.”

Ioannidis did not spare modelers who predicted as many as 40 million people would die, or those who claimed the US healthcare system would be overrun.

“The predictions of most mathematical models in terms of how many beds and how many ICU beds would be required were astronomically wrong,” Ioannidis said. “Indeed, the health system was not overrun in any location in the USA, although several hospitals were stressed.”

Conversely, he added, these actions had detrimental effects on the US health care system, which “severely damaged” because of the measures was taken.

Only time will tell if Ioannidis is proven correct in his assessments. But if he’s even half right, it would suggest that the experts did indeed fail again.

There’s little question that the lockdowns have caused widespread economic, social, and emotional carnage. Evidence that US states that locked down fared better than states that did not is hard to find.

Though not yet certain, the COVID-19 pandemic may well turn out to be another example of central planning gone wrong.

As I previously noted, it’s a sad irony that many of the greatest disasters in modern history—from Stalin’s “kolkhoz” collective farming system to Mao’s Great Leap Forward and beyond—are the result of central planners trying to improve the lot of humanity through coercive action.

During the coronavirus pandemic, experts may have unintentionally brought about one of the most serious human disasters in modern history by removing choice from individuals with superior local knowledge.