Official data of the Bureau of Statistics (Destatis) with updated data till July 3rd, 2020

WIESBADEN – In Week 19 (4 to 10 May, 2020), at least 17,014 people died in Germany, according to provisional results. Mortality figures were down by 501 cases from the previous week (27 April to 3 May); they were roughly 2% below the average across 2016 to 2019. Due to delayed data reporting, however, the number of deaths will slightly increase so that the average can still be reached or slightly exceeded. 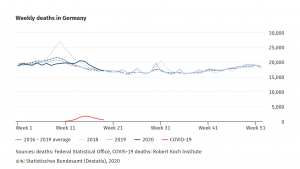 Phase of temporary minimal excess mortality seems to be over

In Week 12 (16 to 22 March), 161 people with laboratory confirmed COVID-19 disease died, according to information from the Robert Koch Institute (RKI). Total death figures in that week corresponded to the average across the previous four years. From Week 13 to Week 18 (23 March to 3 May), however, higher death figures had been recorded. The deviation was largest in Week 15 (6 to 12 April) with 2,371 or 13% more deaths compared with the four-year average. The number of COVID-19 deaths (1,718), too, was highest in that week. For Week 19, unusually high death figures are no longer observed. The phase of temporary excess mortality thus seems to be over, according to most recent information. A total 7,775 COVID-19 deaths were recorded in Weeks 12 to 19 (16 March to 10 May), while total death figures were by at least 7,755 cases above the average.

Excess mortality in Germany was low compared with other European countries. The statistical institute of France, for instance, reported that mortality was up 27% in the period from 1 March to 20 April on a year earlier. The national statistical institute of Italy (Istat) reported that there were even 49% more deaths in March 2020 than in the years 2015 to 2019, on average. The national statistical institutes of Belgium, Great Britain, the Netherlands, Austria, Portugal, Sweden, Switzerland and Spain also recorded higher mortality figures. In many countries, the peak has been passed. In some countries, as in Germany and the Netherlands, the minimal excess death figures are no longer observed. No unusual changes at all compared with the preceding years have been reported, for example, from Norway and in the Czech Republic.

The figures provided by these countries are based on national methods and individual time periods. Some data refer to the reporting date, not the actual death date. The proportions of missing data reports differ, too, and depend strongly on how recent the missing data are.

Methodological notes on the data for Germany:

It is not yet possible to assess what impact the development up to now will have on the entire year of 2020. The development in all of 2020 will have to be considered for a final assessment of temporary excess mortality. In addition, the number of deaths has to be placed in relation to the population to consider, for instance, the ageing process of the population in an adequate manner.

Based on the ad-hoc evaluation “Sterbefälle – Fallzahlen nach Tagen, Wochen, Monaten, Altersgruppen und Bundesländern für Deutschland 2016 bis 2020” (Deaths – Number of cases by day, week, month, age group and Land for Germany, 2016 to 2020), users can carry out their own evaluations of how death figures developed over the year. First provisional data are provided for 2019 and 2020. Accordingly, the average of the years 2016 to 2019 contains both final and provisional data. The provisional data are mere counts of the cases of death reported by the registrar’s offices; the usual data plausibility and completeness checks have not been carried out yet.

The provisional mortality figures refer to the date of death, not the date on which a death was registered. As the reported COVID-19 deaths are published by day of death in the situation report of the RKI, too, the figures can be compared over time with the provisional total death figures. In this count, the RKI includes only cases where age, sex and date of death are known.

For more information on the ad-hoc evaluation of day-to-day mortality figures please refer to the theme page “Deaths, life expectancy” and the “Corona statistics” webpage of the Federal Statistical Office.

Dr. Robert Gorter: what do these data mean?