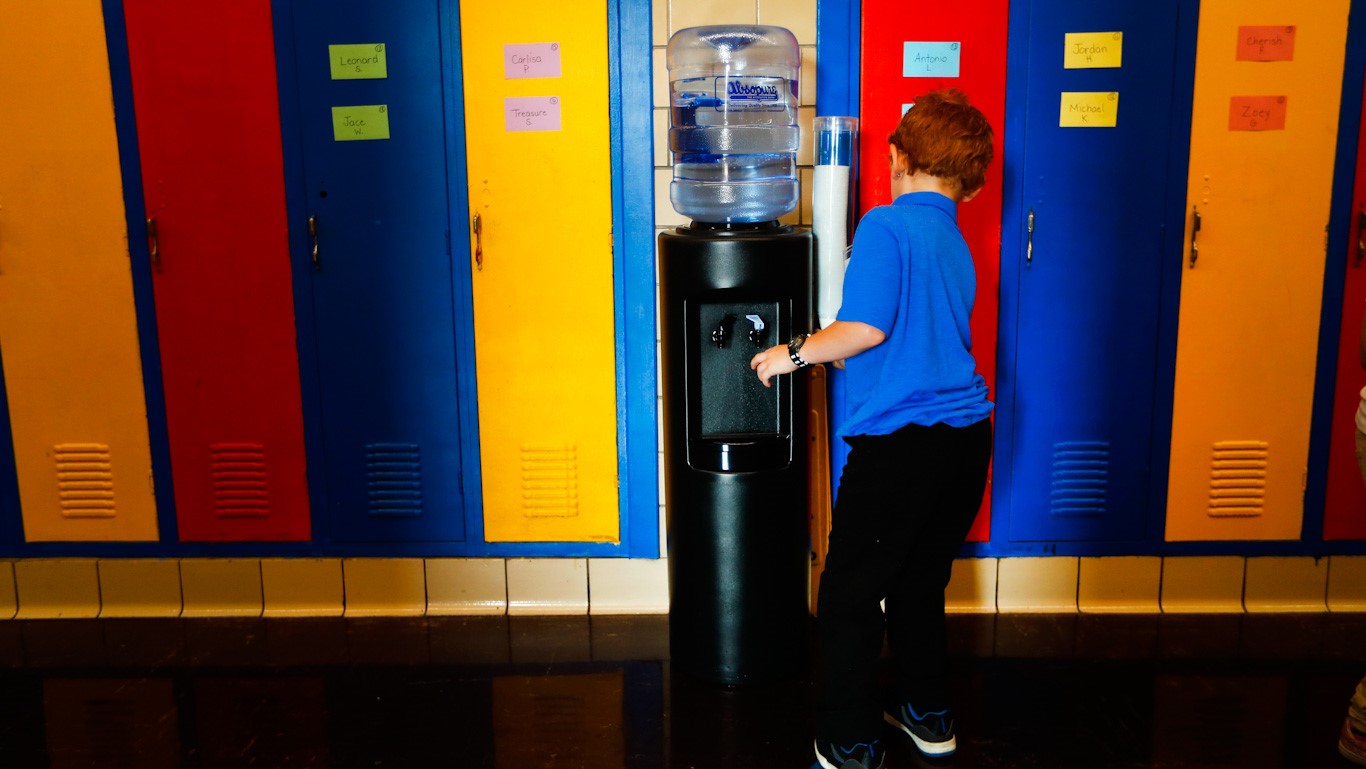 A student gets water from a cooler in the hallway at Gardner Elementary School in Detroit, Sept. 4, 2018, due to elevated lead levels in public water (Paul Sancya | AP)

Veolia, one of the world’s largest private water corporations, has just announced the acquisition of 29.9 percent of Suez Water, another of the planet’s largest multinationals, with a plan to gain full control at a later date.

Based in France, Veolia already employs nearly 100,000 people worldwide, and this deal is set to greatly expand that. In order to get around French anti-monopoly laws, Suez will continue to operate in France, but Veolia will take over its operations around the world, including in the United States.

The company’s CEO, Antoine Frérot, has presented the move as a triumph for the environment. “I am very happy to lay the foundation stone in France today for a world super champion of the ecological transformation,” he said, adding that this was a “wonderful opportunity” for both investors and the planet.

Others were not so sure this take-over was such a positive move. Activist group Food and Water Watch decried the deal. “Veolia’s global domination of public water services is becoming a terrifying reality,” wrote its Public Water for All Campaign Director Mary Grant, warning of a host of negative consequences for humanity at large.

The merger of the world’s largest water corporations will erode any semblance of competition for water privatization deals. This lack of competition will lead to unaffordable costs for families, slack maintenance and safety procedures, loss of union jobs, and rampant corruption. Water privatization has been a disaster for communities across the United States and around the world.”

“Lead is the problem, do not pass this on”

Residents of Flint still depend on bottled water for everything from drinking to bathing years after officials knew the water was poisoned.

The water and waste management firm is perhaps best known in the United States in connection to the Flint water crisis (2014-present), where it was employed in a number of lucrative roles by the city. While much of the public outrage has been directed at local and national officials, many in Flint blame Veolia for its alleged reckless disregard for their lives. In 2016, Michigan residents sued the company, accusing it of professional negligence, a charge Veolia called “outrageous,” claiming that people are “trying to create a corporate villain where one does not exist.”

However, last year, leaked email exchanges show that senior employees knew about the dangerous levels of lead and other carcinogens in the water but did not go public with the information. As a result, months passed before the city was forced to admit there was a deadly problem. The emails, published by The Guardian, are explicit, with officials communicating that “lead seems to be a problem” and instructing others, “do not pass this [information] on.”

In general, allowing private corporations to control water supplies has not been beneficial for local populations. For example, in the United Kingdom, water was privatized in 1989, with the cost of water to the consumer increasing at 40 percent above inflation ever since. Shareholders received $17.5 billion in dividends between 2010 and 2019, but the companies refuse to plug leaks that spill over 650 million gallons every year. As a result, the United Kingdom — a notoriously wet collection of islands — is facing a water shortage by 2045.

In 1997, the World Bank strong-armed Bolivia into privatizing its water system as a condition of a loan agreement. Almost overnight, prices soared. A water and sewer connection for a single household cost $445 in El Alto, where many residents earned less than $2 per day. Nevertheless, private companies managed to get the government to pass laws banning the collection of rainwater. The result was mass thirst, and anger that spilled over into the streets and set the tone for two decades of radical politics in the country, especially after U.S. corporation Bechtel sued the country for $25 million for canceling its municipal contract with them.

The United Nations recognizes the right to water and sanitation as a fundamental human right. Yet when the profit motive is injected into the equation, and it is treated as a commodity to be bought and sold, those without the ability to pay often miss out. Food and Water watch categorically warns against privatization.

“As the fiscal realities of the COVID crisis begin to set in for struggling municipalities, some may consider selling off their valuable water systems as a short-term solution. But this would create long-term harm. Communities must revert all privatized water and sewer systems to public control to ensure safety and affordability for all,” Grant added.

Alan MacLeod is a Staff Writer for MintPress News. After completing his PhD in 2017 he published two books: Bad News From Venezuela: Twenty Years of Fake News and Misreporting and Propaganda in the Information Age: Still Manufacturing Consent. He has also contributed to Fairness and Accuracy in Reporting, The Guardian, Salon, The Grayzone, Jacobin Magazine, Common Dreams the American Herald Tribune and The Canary.

What will be next after privatization of fresh water: will it be fresh air?