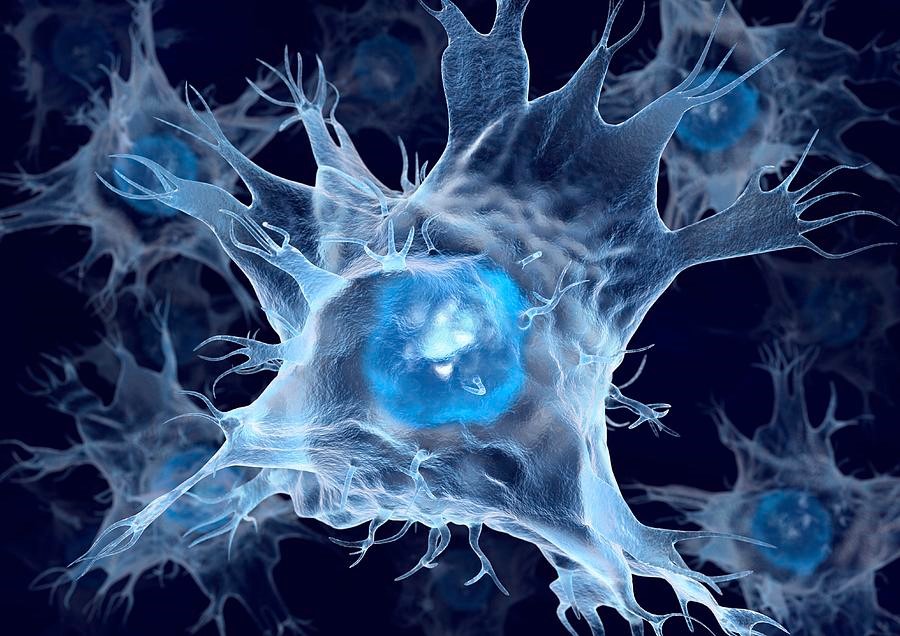 Dendritic cells (DCs) are antigen-presenting cells of the mammalian immune system only. Lower animals do not have DCS and a T-cell system. Their immune function relies much more on eosinophils. In mammals, increased numbers of eosinophils are usually a symptom of allergies, or, activation of a much more basic component of immune functioning.

Eosinophils are major effector cells in the immune system. They have a beneficial role in host defense against nematodes and other parasitic infections and are active participants in many immune responses. However, eosinophils can also be damaging as part of the inflammatory process of allergic disease.

Eosinophil accumulation and inappropriate activation cause symptoms and pathology in allergic asthma. In the peripheral bloodstream, eosinophils make up approx 0.5-1% of the total white blood cells (leukocytes) in normal individuals, but this proportion is often raised to 3-5% in people with allergic symptoms and can be much higher in those exposed to parasitic worms.

Eosinophils are recruited from the bloodstream into the tissues at sites of inflammation. Upon activation, eosinophils can release an array of inflammatory mediators. Cytotoxic proteins MBP, ECP, EDN, and EPO are unique to eosinophils and are important in the defense against extracellular parasitic infections but may also cause excessive tissue damage in allergic conditions. There are many strategies to limit eosinophil-related tissue damage.

The DCS main function is to process antigen material and present it on the cell surface of the T cells of the immune system. They act as messengers between the innate and the adaptive immune systems.

Dendritic cells are present in those tissues that are in direct contact with the external environment, such as the skin and the inner lining (mucosa) of the nose, lungs, stomach, intestines, and vagina. They can also be found in an immature state in the blood. Once activated, they migrate to the lymph nodes where they interact with T cells and B cells to initiate and shape the adaptive (humoral) immune response. At certain development stages, they grow branched projections, the dendrites that give the cell its name (δένδρον or déndron being Greek for ‘tree’). While similar in appearance, these are structures distinct from the immobile dendrites of neurons, as found in the brain and spinal cord. The immune-competent but still immature dendritic cells are also called veiled cells, as they possess large cytoplasmic ‘veils’ rather than dendrites yet. 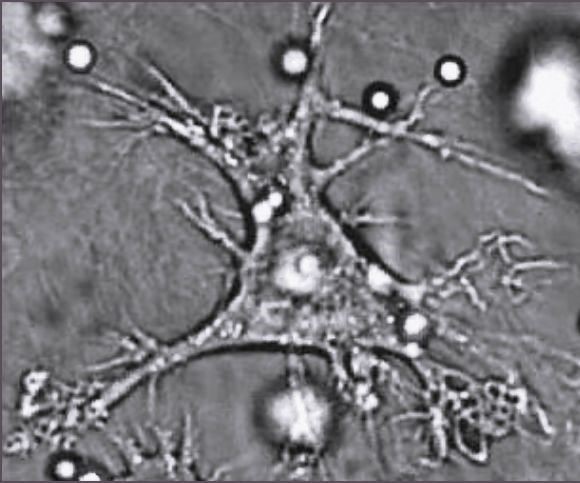 In the Gorter Model, cancer is seen as a disease that has multiple causes and therefore, a concept of individualized therapies rather than one silver bullet which is applied. 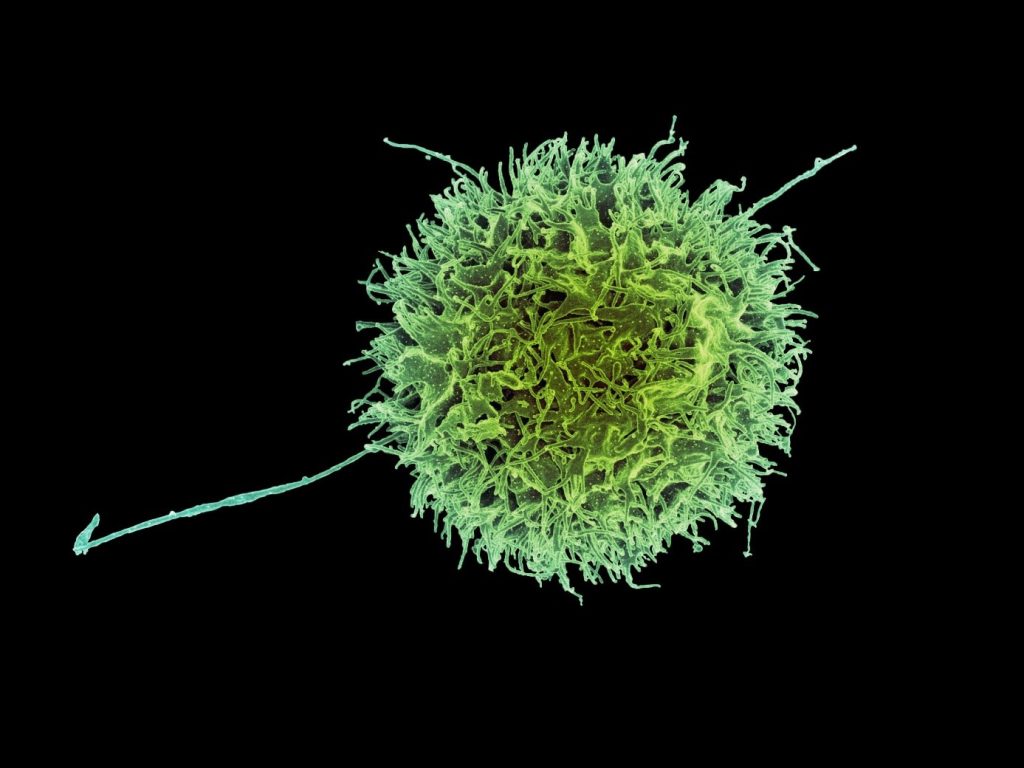 Natural killer cells are a type of cytotoxic lymphocyte critical to the innate immune system and represent 5–20% of all circulating lymphocytes in humans. The role of NK cells is analogous to that of cytotoxic T cells in the adaptive immune response. NK cells provide rapid responses to virus-infected cells and other intracellular pathogens acting around 3 days after infection and respond to tumor formation when the DNA-repair mechanisms fail. Typically, immune cells detect the major histocompatibility complex (MHC) presented on infected cell surfaces, triggering cytokine release, and causing the death of the infected cell by lysis or apoptosis. NK cells are unique, however, as they have the ability to recognize and kill stressed cells in the absence of antibodies and MHC, allowing for a much faster immune reaction. They were named “natural killers” because of the notion that they do not require activation to kill cells that are missing “self” markers of MHC class 1. This role is especially important because harmful cells that are missing MHC I markers cannot be detected and destroyed by other immune cells, such as T lymphocyte cells.

In addition to natural killer cells being effectors of innate immunity, NK cells play important functional roles, including self-tolerance and the sustaining of NK cell activity. NK cells also play a role in the adaptive immune response: numerous experiments have demonstrated their ability to readily adjust to the immediate environment and formulate antigen-specific immunological memory, fundamental for responding to secondary infections with the same antigen. The role of NK cells in both the innate and adaptive immune responses is becoming increasingly important in research using NK cell activity as an effective cancer therapy because of their interaction with dendritic cells.

To summarize and conclude:

One could see the DCs as the „policemen“ of the immune system and they search for anything which is (potential) harmful to the body:

Although NK cells were initially discovered and named for their spontaneous ability to kill tumor cells, the knowledge of NK cells has grown to include not only their cytotoxic but also their immunoregulatory function, as well as the characterization of many new activating and inhibitory receptors whose balance regulates their activity. In this sense, through recognition of cognate ligands on tumor cells by these receptors NK cells are able to distinguish transformed from normal cells. However, immunosuppressive factors produced by tumors affect NK cell receptor repertoire and lead to impaired NK cell function that facilitates tumor immune escape and disease progression. A better understanding of alterations in NK cell receptor expression, disturbance in NK cell activation, and effectors function in cancer patients may aid in defining novel biomarkers of disease as well as in creating many new immunotherapeutic strategies that potentiate NK cell antitumor activity.

In our cancer patients who came for treatment according to the Gorter Model, we could document in approximately 95% a stark decline in their function. Not only the numbers of available NK cells are important but for sure, but also their function.

After being treated with Viscum album (European Mistletoe) for 12 weeks, we could document complete restored NK functions in 92% of all patients and approximately in 85% of the investigated patients a return to average numbers in the peripheral bloodstream.

This is one of many well-documented positive effects the Viscum album has in patients with active cancer.

DNA repair systems are essential for the maintenance of genome integrity. Consequently, the dysregulation of repair genes can be expected to be associated with significant, detrimental health effects, which can include an increased prevalence of birth defects, an enhancement of cancer risk, and an accelerated rate of aging. Although original insights into DNA repair and the genes responsible were largely derived from studies in bacteria and yeast, well over 125 genes directly involved in DNA repair have now been identified in humans, and their cDNA sequence established. These genes function in a diverse set of pathways that involve the recognition and removal of DNA lesions, tolerance to DNA damage, and protection from errors of incorporation made during DNA replication or DNA repair. Additional genes indirectly affect DNA repair, by regulating the cell cycle, ostensibly to provide an opportunity for repair or to direct the cell to apoptosis. For about 70 of the DNA repair genes documented, both the genomic DNA sequence and the cDNA sequence and chromosomal location have been elucidated. In 45 cases, single-nucleotide polymorphisms have been identified and, in some cases, genetic variants have been associated with specific disorders. With the accelerating rate of gene discovery, the number of identified DNA repair genes and sequence variants is quickly rising. In our report here, we limited ourselves to genes whose function is directly related to DNA repair.

It is well estimated that a human being with a healthy lifestyle (no smoking, no BBQ, no alcohol, no use of antidepressants, no participation in experimental vaccinations, etc. will develop roughly 100.000 cancerous cells per day. These cancerous cells occur during cell division (mitosis) where one cell divides into two identical cells. Mitosis by itself is still only partly understood. A human cell has 46 pairs of chromosomes; each chromosome contains tens of thousands of genes; each gene contains millions of DNA molecules. Mitosis can take place within 24 hours. During each mitosis, in the copying process, a few mistakes can take place: like building in the wrong amino acid. This is the very beginning of a mutation. Inside the nucleus of each cell, there are genes and other mechanisms to recognize and repair mutations.

One major reason for the continuous occurrence of cancerous cells is the decline or even complete destruction of the built-in DNA repair.

The barley EST DNA Replication and Repair Database (bEST-DRRD) is a tool for the identification of the genes involved in DNA replication and repair.

Low-Level Radiofrequency Exposure Does Not Induce Changes in MSC Biology: An in vitro Study for the Prevention of NIR-Related Damage.

Similar Articles in Relation to the Clinical Use of Viscum album

Use of Iscador, an extract of European mistletoe (Viscum album), in cancer treatment: prospective nonrandomized and randomized matched-pair studies nested within a cohort study.

Anticarcinogenic and antimetastatic activity of Iscador.

Randomised and non-randomised prospective controlled cohort studies in matched-pair design for the long-term therapy of breast cancer patients with a mistletoe preparation (Iscador): a re-analysis.