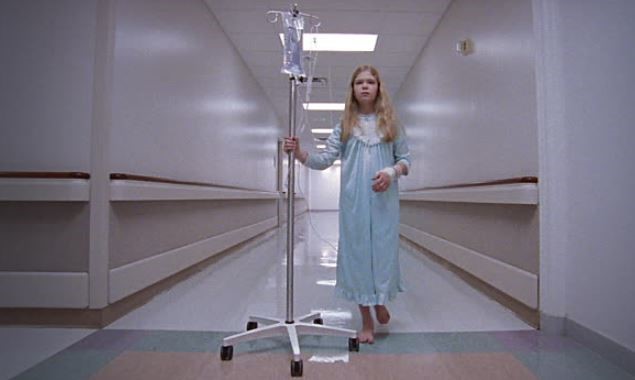 The current global drive with artificial (synthesized) mRNA injections of millions of people reminds many, who know their history, of Josef Mengele (or “The Angel of Death”) during the holocaust in Europe. Mengele experimented on tens of thousands of prisoners (including children). Under Appendix, we will pay attention to the criminal acts of Mengele and his affiliated “scientists.”

There’s a secret layer of information in one’s cells called messenger RNA (mRNA) that is located between DNA and proteins and serves as a critical link. Now, is of great concern for scientist to the whole world of vaccine philosophy.

Scientists at Sloan Kettering found that mRNA itself carries cancer causing changes – changes that genetic tests don not even analyze, flying completely under the radar of oncologists across the globe.

So now, it’s time for independent laboratories that are not vaccine manufacturers (or hired by them) to run diagnostic testing on the COVID-19 vaccine series and find out if these are cancer-driving inoculations that, once the series is complete, will cause cancer tumors in the vaccinated masses who have all rushed out to get the jab out of fear and propaganda influence. Welcome to the world of experimental and dirty vaccines known as mRNA “technology.”

Previously unknown cancer driving messengers are hiding in some RNA; not in DNA

This mind-blowing discovery should be published on every medical news site, newspaper, television news broadcast and on the CDC website, but unless you are reading this article and use DuckDuckGo as your search engine, you probably wouldn’t ever see it. That’s because Google is in on the fix, with Big Pharma and the VIC – the vaccine industrial complex. So here’s a more in-depth explanation of what we’re looking at, for real, regarding mRNA and vaccines.

The information carrying molecule, messenger RNA, can instruct human cells ultimately in the same way as cancer drivers, playing a major role in causing cancer to thrive while inactivating natural tumor-suppressing proteins the human body creates to save you from cancer. This is the complete opposite of what the CDC and the vaccine manufactures are telling everyone right now about the COVID-19 injections, and this is based on clinical research by several molecular biologists at the Sloan Kettering Institute.

Even sequencing the DNA in cancer cells does not reveal these changes that make these mRNA sneaky and only discovered when one looks for them.. It is like a Trojan horse that tells your cells to allow these changes to be made, as if they were safe, but they’re not. All assumptions being made about mRNA being ‘safe’ right now have been completely turned 180 degrees with this research. Consider this very carefully if you have not yet been vaccinated with mRNA technology, and you may want to ‘lawyer-up’ if you already got the jabs based on mRNA nanotechnology.

After your mRNA-based COVID-19 injections, RNA is transported out of one’s cell’s nucleus, and will no longer function properly as a cancer tumor suppressor.

Bill Gates and the Vaccine Industrial Complex are very sinister, as we all know, but to create vaccines that truncate (disable by cutting short) cancer tumor suppressors, and destroy the human body’s ability to protect against cancer, well, is not only just complete insanity but also criminal. It should all of us remind us of the Nazi doctor, Dr. Josef Mengele. Truncated tumor-suppressor proteins are similar to the DNA mutations that cause cancer cells to mutate and multiply uncontrollably. Will America see cancer cases skyrocket over the next few years due to COVID-19 vaccines? Only time will tell, but right now, science is revealing that it’s likely. Pay close attention, please.

Substantial amount of people with blood cancer have the SAME inactivation of tumor-suppressor genes at the mRNA level.

Scientists also discovered that a substantial amount of people with blood cancer, a.k.a. chronic lymphocytic leukemia (CLL), have the same exact inactivation of tumor-suppressor genes at the mRNA level. In fact, the mRNA changes they detected could possibly account for the missing DNA mutations, and that spells out bad news for everyone who thinks the COVID-19 vaccine series is “safe and effective.”

Even if just half (partial truncation) mRNA changes in human cells take place, it’s enough to “completely override the function of the normal versions that are present,” according to the Sloan Kettering team of scientists. These changes can also apply to 100 different genes at the same time, so the changes can add up quickly and cause horrific health repercussions. Of course, mainstream media will dismiss any connections made by these discoveries, but they’re paid to regurgitate pharma talk, so that’s not surprising at all.

It is important to note that mRNA changes, according to researchers, are not limited to blood cancer, but have been linked to acute lymphatic cancer and breast cancer. Could this mean we’re looking at a new population control mechanism hidden in messenger RNA?

About 20,000 people in the US develop chronic lympthocytic leukemia (CLL) each year. How many will quietly begin developing it now, and then have it suddenly “show up” five years from now? Symptoms include fatigue, enlarged lymph nodes, and night sweats. Did you get mRNA injected and experience those symptoms already? Are those symptoms on the warning label – the injection liquid   insert? Did you read them?

There is only one “treatment” offered right now for CLL by the Pharma Industrial Complex, and that is stem cell bone marrow transplantation. Oh, but it’s only recommended if your CLL is “likely” to advance. Do your mRNA injections now qualify you as “likely” to advance with CLL?

Tune your internet and visit Vaccines.news for updates on human challenge trials for people interested in suppressing genes that fight cancer. No wonder Mark Zuckerberg is scared to death about the COVID-19 injections.

Substantial amount of people with blood cancer have the SAME inactivation of tumor-suppressor genes at the mRNA level.

Information on Dr. Josef Mengele* (aka “The Angel of Death”) 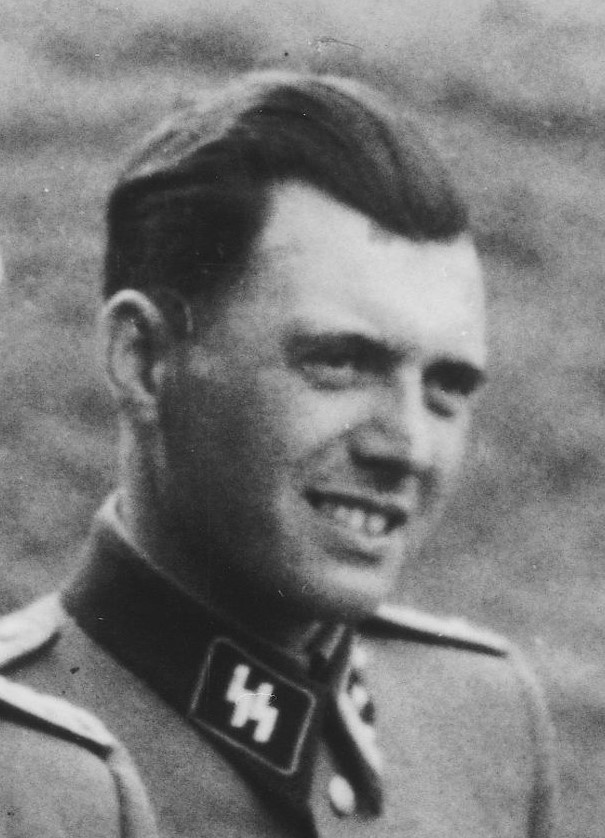 Josef Mengele (1911-1979), also known as the Angel of Death (German: Todesengel) was a German (SS) officer and physician during World War II.

Thee Angel of Death in Auschwitz, Poland. Three SS officers socialize on the grounds of the SS retreat outside of Auschwitz, at “Solahütte”, 1944. From left to right they are: Richard Baer (Commandant of Auschwitz), Dr. Josef Mengele and Rudolf Hess (the former Auschwitz Commandant).

Josef Mengele is mainly remembered for his actions at the Auschwitz concentration camp where he performed cruel and deadly experiments on prisoners; and was a member of the team of doctors who selected victims to be killed in the gas chambers and was one of the doctors who administered the poisonous gas.

Before the war, Mengele had received doctorates in anthropology and medicine, and began a career as a researcher. He joined the Nazi Party in 1937 and the SS in 1938. He was assigned as a battalion medical officer at the start of World War II, then transferred to the Nazi concentration camps service in early 1943 and assigned to Auschwitz, where he saw the opportunity to conduct genetic research on human subjects. His experiments focused primarily on twins, with no regard for the health or safety of the victims. 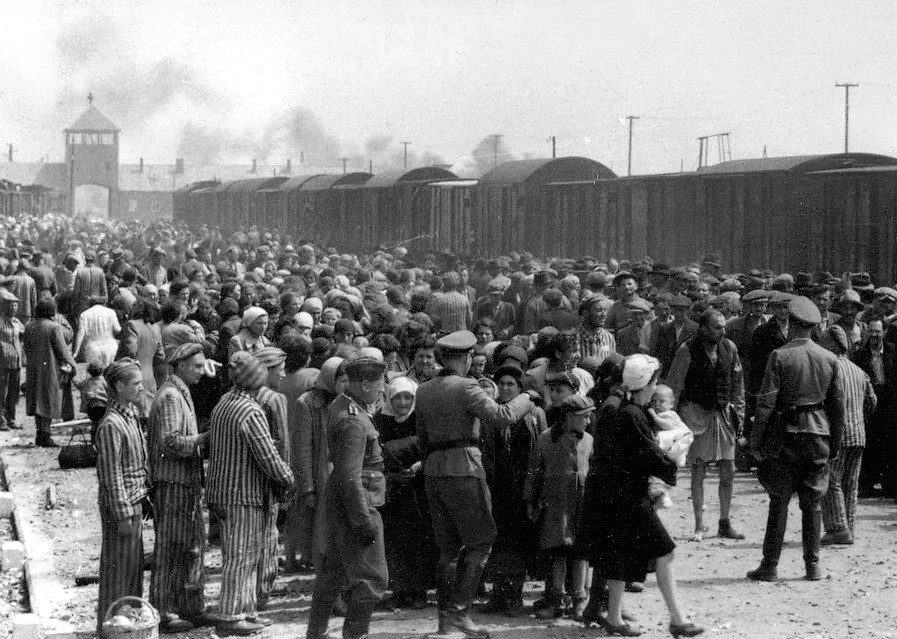 “Selection” of Hungarian Jews on the ramp at Birkenau, May/June 1944

After the war, Mengele fled to South America. He sailed to Argentina in July 1949, assisted by a network of former SS members. He initially lived in and around Buenos Aires, then fled to Paraguay in 1959 and Brazil in 1960, all the while being sought by West Germany, Israel, and Nazi hunters such as Simon Wiesenthal, who wanted to bring him to trial. Mengele eluded capture in spite of extradition requests by the West German government and clandestine operations by the Israeli intelligence agency Mossad. He drowned in 1979 after suffering a stroke while swimming off the coast of Bertioga and was buried under the false name of Wolfgang Gerhard. His remains were disinterred and positively identified by forensic examination in 1985. 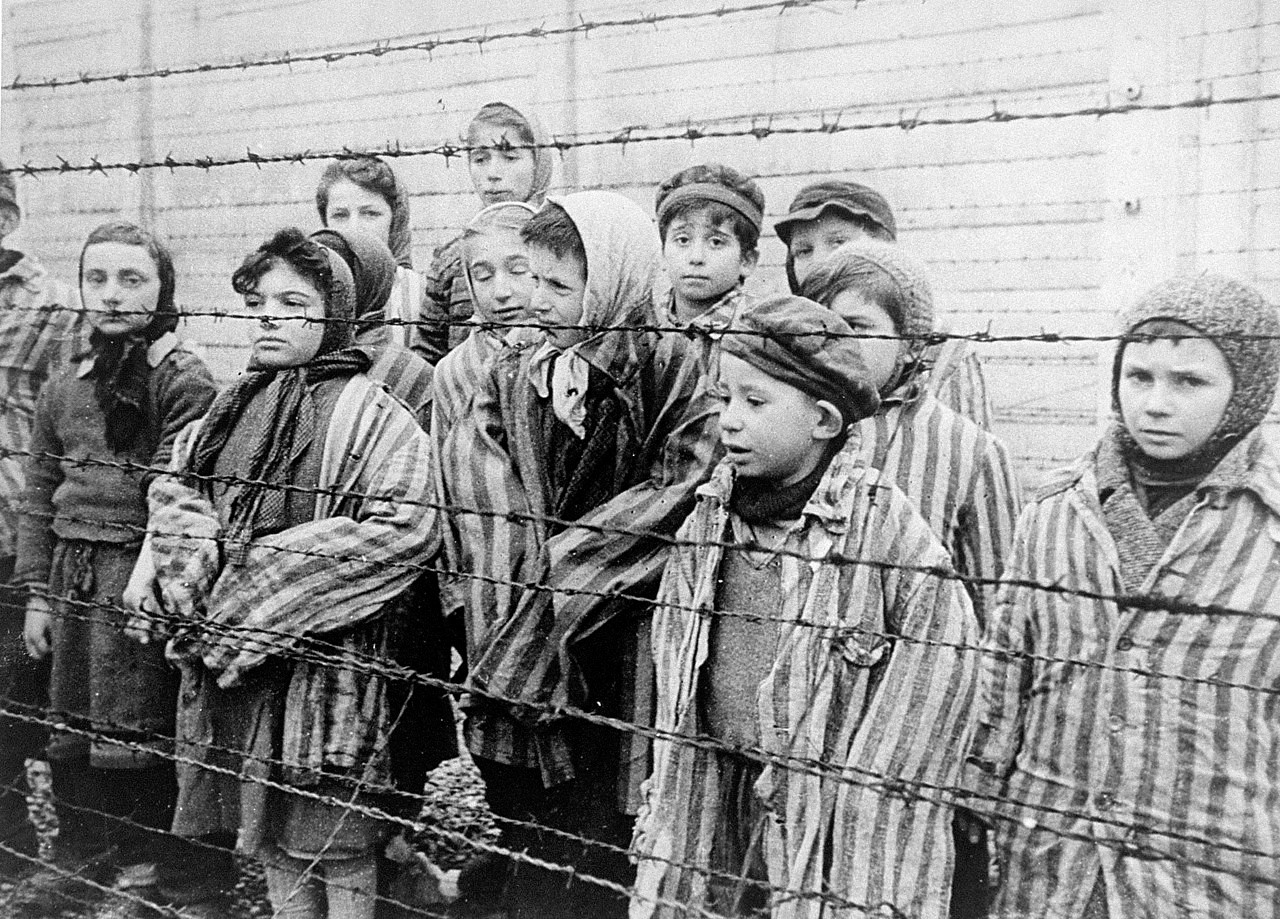 Jewish twins kept alive in Auschwitz (Germany) for use in Mengele’s medical experiments. The Red Army liberated these children in January 1945. 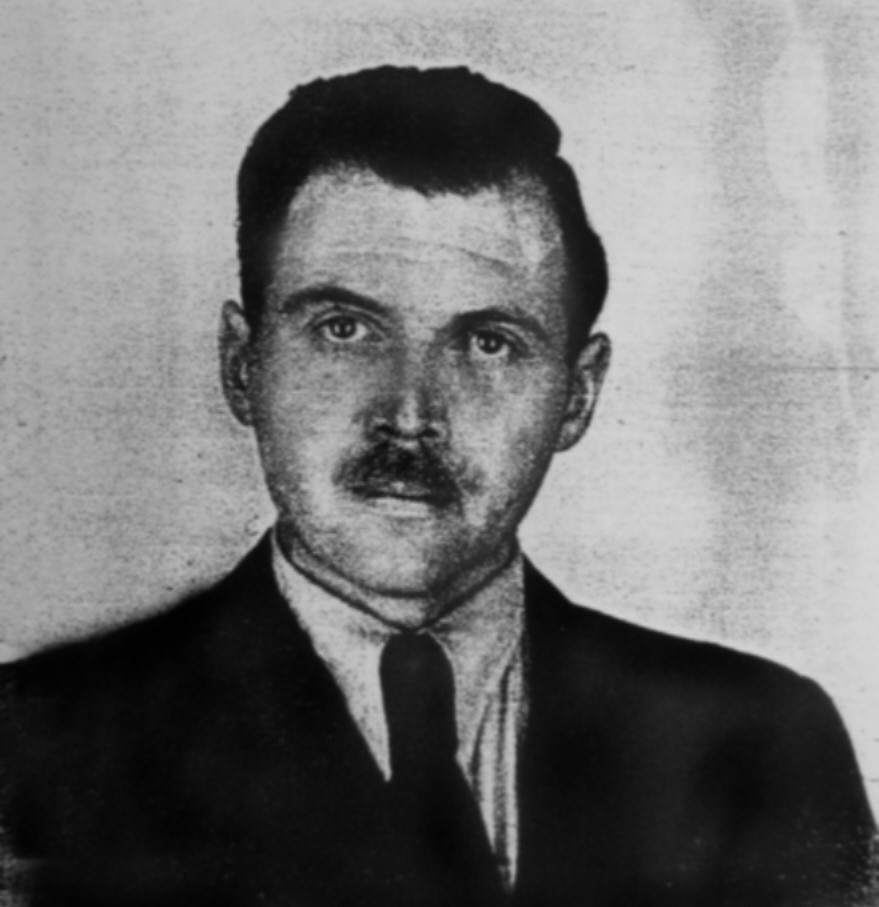