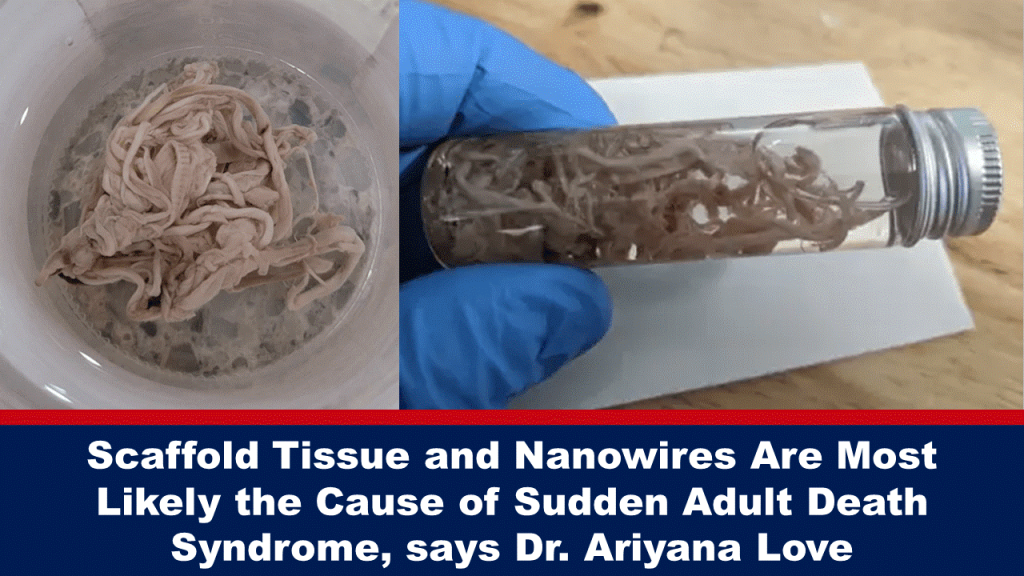 As evidence of rubbery “blood clot” samples pulled out of veins and arteries of “vaccinated” deceased by embalmers continues to be revealed and analyzed, a little over a week ago. Dr. Ariyana Love gathered her research relating to tissue scaffolding and nanowires which led to some conclusions.

“The samples pulled out of the veins and arteries of Covid vaccinated corpses shocked the world and exposed that something more than just “vaccination” is happening with the Covid vax,” Dr. Love wrote.

Reviewing images shown by Mike Adams of synthetic tissue growing inside people after being injected with Covid “vaccines,” she said, “this is most likely the cause of ‘Sudden Adult Death Syndrome’.”

The rapidly increasing number of samples pulled out of the veins and arteries of Covid vaxxed corpses shocked the world and exposed that something more than just “vaccination” is taking place.

In my latest interview with Stew Peters entitled, Human Umbilical Cord Being Injected In Kids: Tissue Scaffolding Technology In Covid Jab, I revealed in detail what the strange “blood clot” samples found by embalmer Richard Hirschman, actually are. The story was first aired by Dr. Jane Ruby on Stew Peters Show in January and was recently examined LIVE on air by scientist Mike Adams in the InfoWars studio, in a worldwide medical bombshell.

The samples pulled out of the veins and arteries of Covid vaccinated corpses shocked the world and exposed that something more than just “vaccination” is happening with the Covid vax. The fact that mainstream media did not pick up on this story is proof we are in dystopian times. 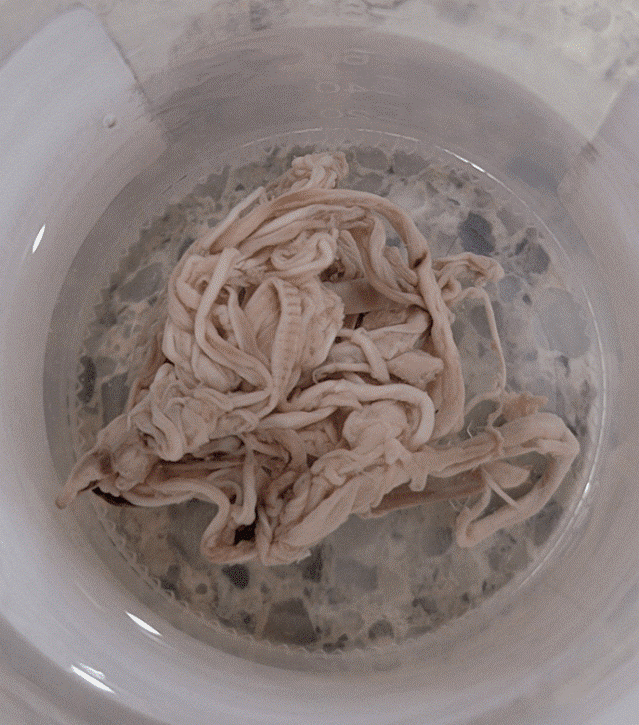 Embalmer Richard Hirschman’s samples were published by Dr. Jane Ruby. In the meantime many more reports on similar findings by many embalmers and pathologists confirm these initially findings

These images show synthetic tissue being grown inside humans from the Covid vax. This is most likely the cause of “Sudden Adult Death Syndrome.” 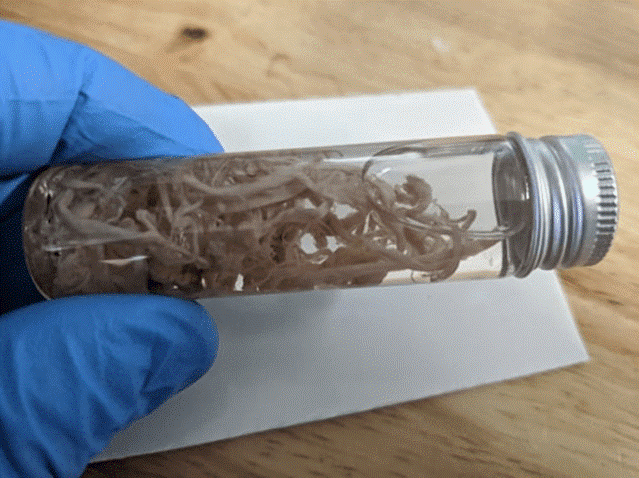 From Autologous Flaps to Engineered Vascularized Grafts for Bone Regeneration

Below are images of artificially grown blood vessels by lab scientists. 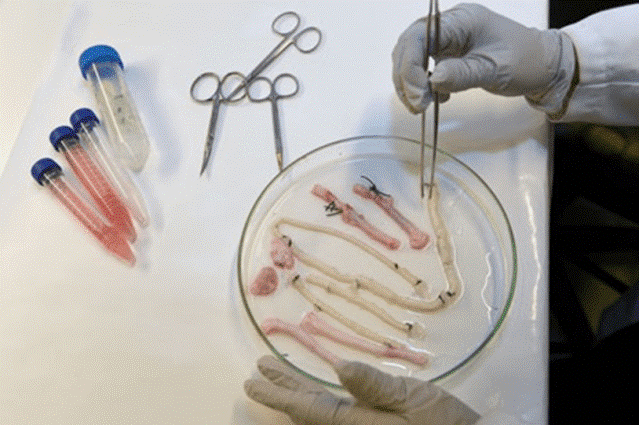 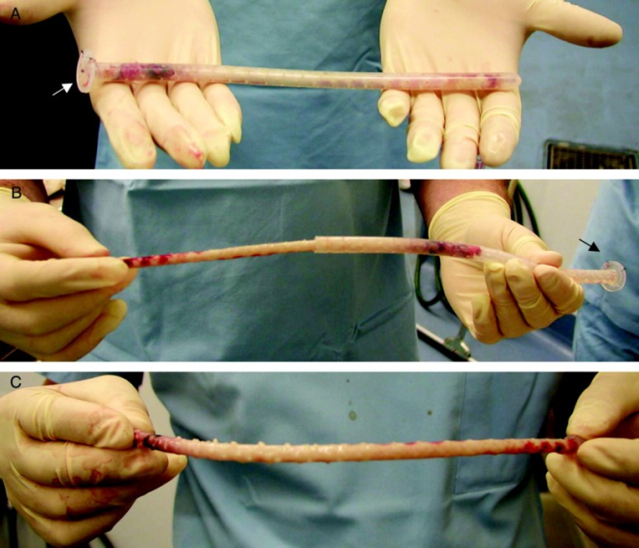 Artificial blood vessels. There are synthetic and natural polymers. They are elastic and made from these five different materials:

We believe the below image from the embalmer and published by InfoWars, is a Silk fibroin tissue construct. 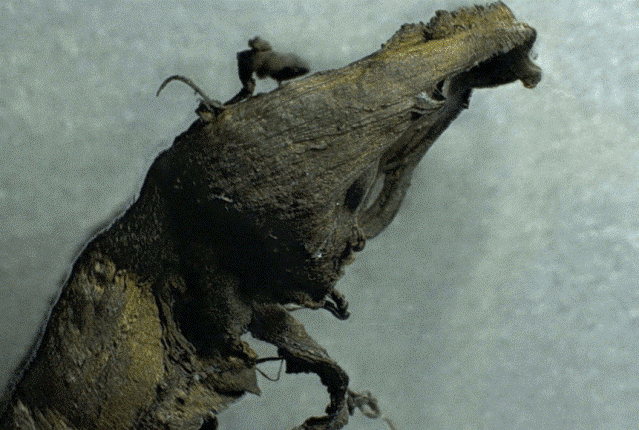 Nanowires are being used for the hybridization of humans. Pharmaceutical companies and world governments are attempting to grow artificial tissue inside humans, using organic matter from cross-species genomics. They appear to be trying to merge humans with electronic devices for internal tracking and remote control.

Nanowires are superconductor batteries used for tissue scaffolding inside the human body. I wrote about tissue scaffolding technology in December of 2021, in my article entitled, Quantum Dots, DNA Barcoding, Nano-Razors & The Israeli State.

Nanowire arrays for neurotechnology and other applications

The presence of gold nanowires causes elevated lipid peroxidation and intracellular oxidative stress under radiation. This can literally fry people from the inside using microwave frequency. This could explain why vaxxed persons are reporting torture by electrical activity in their heads and their bodies.

I believe the image below that was shared by Mike Adams on InfoWars, shows a gold nanowire. 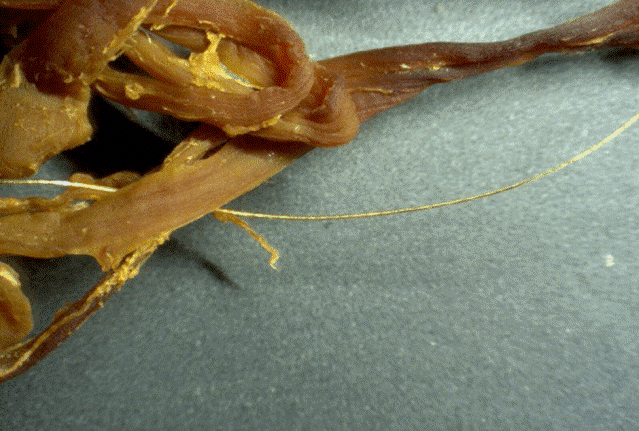 This study entitled, Macroporous nanowire nanoelectronic scaffolds for synthetic tissues, reveals electrical sensors made from silicon which are lab-on-a-chip pharmacological platforms and hybrid 3D electronics-tissue materials for synthetic biology and tissue construction inside the human body. These are planar devices used to probe electrical activity near the surface of the heart, brain, and skin, acting as transmitters, transistors, and receivers.

Nanowires are also called detectors, metal electrodes or carbon nanotube/nanofiber, or NanoES. They are implantable microelectrodes, nanoscale semiconductors, and flexible/stretchable electrodes. The sensor network is flexible, macroporous, and 3D. They are used to construct artificial tissue with embedded nanoelectronic sensory capabilities.

Below is an image of Nanowires:

Organoids are used to construct a new brain inside humans, for mind control. Organoids and transgenic hydras are being used to build a new neural network inside the body. The studies showing this can be found in my article entitled, Pharma Exposed! Autism Spectrum Disorder (ASD) Is Targeted Gene Deletion!

Microspheres are in the Covid shots. They are also used for tissue engineering and scaffolding, simultaneous drug delivery, and for growing cells inside the human body. The technology is externally controlled by EMF (5G) transmission. Microspheres can release their payload, for weeks, months, and even years later.

This tech was developed with the purpose of destroying cancerous tumor cells and now it’s being misused for the democide of humanity.

The study entitled, Nanostructured injectable cell microcarriers for tissue regeneration, demonstrates that nanostructured microspheres include nanocomposite and nanofibrous microspheres which have been employed as cell carriers for tissue construction. They produce cell attachment and growth, promote cell-carrier interactions and facilitate stem cell differentiation for target tissue construction inside the human body.

A study entitled, PHBV Microspheres as Tissue Engineering Scaffold for Neurons, demonstrates that Polymeric microspheres are being used to grow artificial neurons inside humans.

A study entitled, „Breathing life into engineered tissues using oxygen-releasing biomaterials“ reveals that the artificial cells feed on your blood to grow and survive! This may explain the strange blood clots we are seeing more and more in vaxxed injured persons. Human umbilical vein endothelial cells are used to grow the artificial cells.

This study entitled, Generation and differentiation of microtissues from multipotent pre-curser cells for use in tissue engineering, reveals that Microspheres use unrestricted somatic stem cells from human umbilical cord blood.

This technology is truly vampiric and relies on human baby tissue in order to be grown inside humans. This should not be injected into anyone, especially not children!

Dr. Ariyana Love is a second-generation Naturopathic Doctor, independent journalist, and founder of an international foundation for harmonized medicine.  Although she is an American, she now lives in Finland.

Scaffold Tissue and Nanowires Are Most Likely the Cause of Sudden Adult Death Syndrome, says Dr. Ariyana Love