Robert Gorter, MD, PhD, is also a licensed acupuncturist. He did his acupuncture training in Holland and in Belgium during the years 1965 through 1973. His teachers themselves were trained in Japan and the UK by Chinese and Japanese acupuncturists. Robert started his studies in medicine at the Medical School of the University of Amsterdam (Gemeente Universiteit van Amsterdam, also known as the “GU” to distinguish this university from the private university “Vrije Unversiteit” in Amsterdam or “VU”) in 1965. Quickly, he felt uncomfortable with the materialistic thinking of his teachers who more and more started to compare the human organism as a more or less perfect machine or computer and disease was a defect of one part of the machine or computer which should be exchanged or repaired by a mechanic (doctor). As a child in his parent’s house, he met many people and dignitaries from all over the world who had quite different ideas and concepts about life and daily activities and objects. It fascinated him how it could be that well-educated people would make very different conclusions say bizarre things like: “This is a car”, pointing at a bicycle. Thus, it struck Robert at an early age that there are different ways of making conclusions while looking at the same object (issue). Thus, he was more and more interested in the process, the way of coming to knowledge. Robert Gorter therefore decided to study philosophy (German: Erkenntnisstheorie, or English: Theory of Knowledge) besides medicine in Amsterdam. He usually studied medicine during the week. On Fridays and over the weekends, depending on upcoming exams, he would study philosophy after the obligatory lectures. In the 1960’s Faculties of Philosophy in most of Western Europe were very much determined by Marxism and Existentialism (like the world views of Foucault, Jean Paul Sartre, to mention a few). Robert was deeply disturbed by this as he wanted to understand philosophers like Fichte, Hegel, Steiner and Goethe but he was laughed at in work groups. It was made clear to him that if that was his field of interest, he should look for another university or study on his own. His search for a better understanding of how man comes to knowledge, he also looked at health and disease in various was and out of this quest for more knowledge, he came across Traditional Chinese Medicine (acupuncture). Dr. Gorter used acupuncture already in Amsterdam in 1971, as he established the first methadone detox project on the European continent and used successfully acupuncture in addition to methadone. Out of his experiences with methadone for detox and maintenance and his successful application of (electro-)acupuncture in low threshold detoxification programs, the City of Amsterdam granted him and his team to start a low-threshold house for methadone detox and a needle exchange program to prevent the spread of hepatitis C virus at that time (HIV was not around in Holland at that time). The house was located in the Spuistraat in the very center of Amsterdam and called: the HUK. Social workers and nurses and three doctors (one of them was Nanda Wittebrood). Without any costs to the drug user, warm lunches and clean needles and syringes were offered. A few years later, HUK was closed and officially integrated into the Jellinek Kliniek in Amsterdam. Robert Gorter was then part-time employed by the Jellinek Kliniek. One of the directors of the Jellinek Kliek at that time was the psychiatrist Thijs Bos. Robert Gorter happened to be old friends of Thijs Bos from their times they both studied at the GU in Amsterdam. Only Thijs Bos was a few years older. Thijs Bos had seen the very positive effects of acupuncture in this population of intravenous drug users and fully supported the application of acupuncture by Robert Gorter. This resulted in the establishment of a formal low-threshold Detox Program with (electro)-)acupuncture. Robert Gorter received grant money for the period of five years to rent a representative building at the Willemsparkweg (close to the Zoo in Amsterdam) and hire experienced nursing staff and personnel for art therapy and other accompanying therapies. Dr. Gorter would come to the clinic very early morning on his bicycle and apply the needles and later, the nursing staff was so well-trained that they would apply the acupuncture needles in the afternoons. Robert Gorter was also very much interested in the use of (electro-)acupuncture for anesthesia. He studied this with his old teacher from Belgium and became so skilled that for various operations, he did the anesthesia in hospitals in Amsterdam, Rotterdam and Utrecht. One example was well discussed among peers: “In 1978, a patient of Robert Gorter with advanced MS (Multiple Sclerosis) needed an operation for her newly diagnosed thyroid carcinoma and the thyroid had to be completely removed. In MS, general anesthesia is contra-indicated as often the general anesthesia will severely worsen the symptoms of MS.  For non-cancer related symptoms, the patient had been helped quite well with acupuncture by Robert Gorter. She requested the use of acupuncture for her radical thyroid removal. So it was done: in the university hospital of the University of Utrecht, Robert Gorter applied his needles in both feet and one ear of the patient and connected them to the apparatus for the electro stimulation of the needles. The patient did very well and no form of anesthesia other than the one by acupuncture was necessary. It struck the surgeon that there was hardly any bleeding when he cut and that estimated the effect of the anesthesia brought about by acupuncture at  about 95% of the forms anesthesia’s he knew at that time. Thus, this MS patient was helped very well and did not need any anesthesia which would have brought about a worse condition.” Robert Gorter applied acupuncture anesthesia in numerous surgeries including caesarian sections, gall bladder removals, inguinal hernias, and dental procedures. 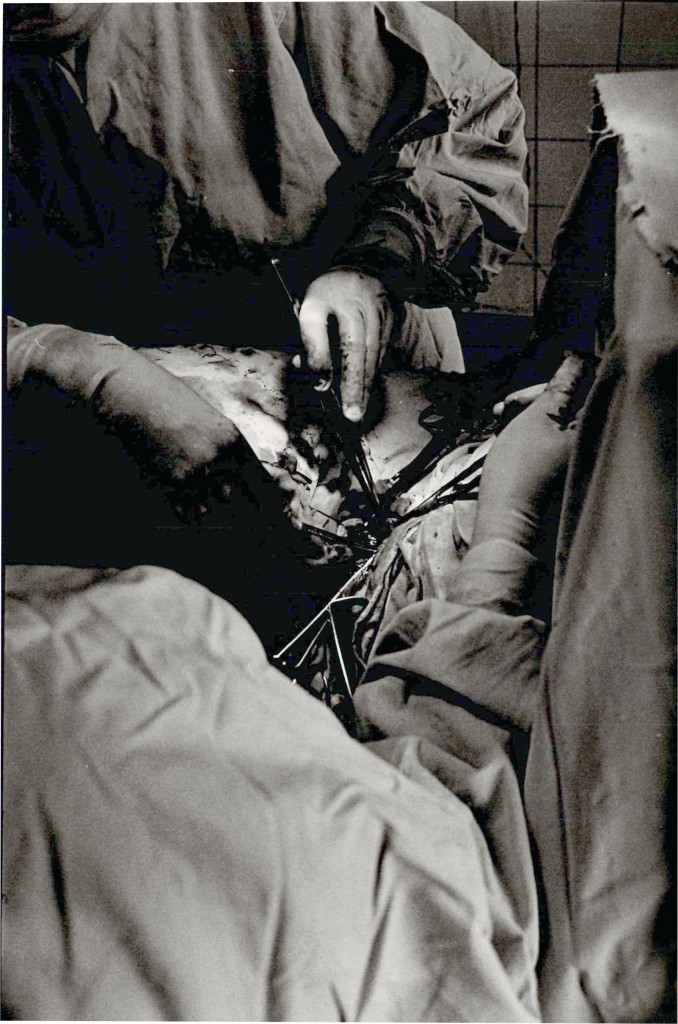 During  abdominal surgery where the patient was completely awake. Robert Gorter had made the same experience with abdominal surgeries as Chinese surgeons during their operations: the only tissue what stays sensitive and seems to be difficult to influence is the peritoneum. Therefore, when cutting the peritoneum, an infiltration with a local anesthetic (Lidocaine or Procaine) was used. Also, one would not pull too hard on the organs as this can provoke a Vagus reflex. 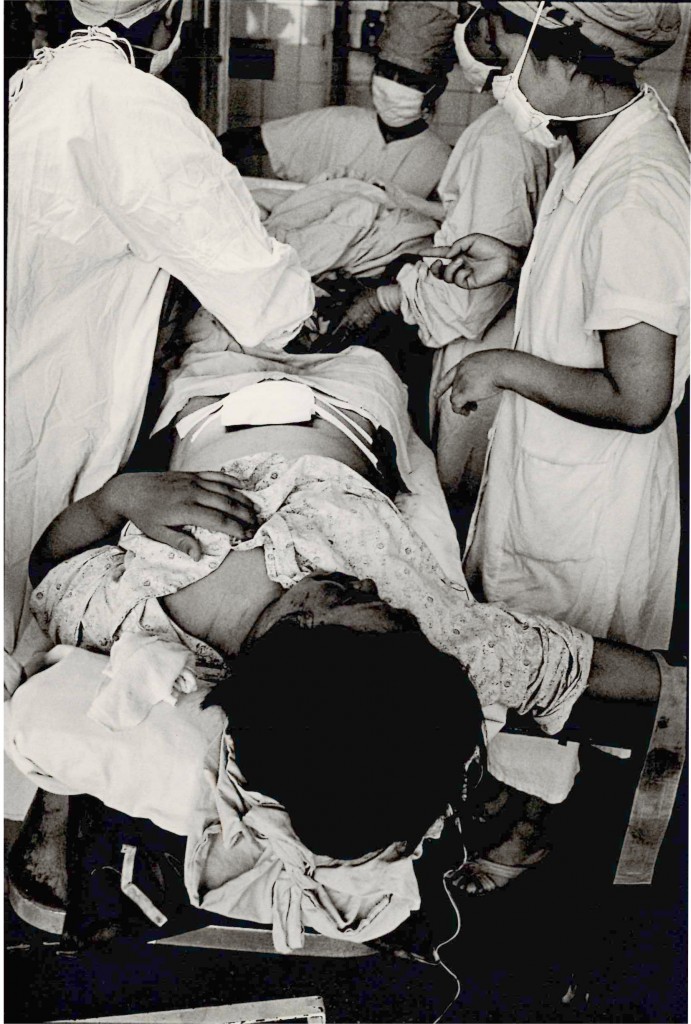 Under acupuncture anesthesia in a complicated and high risk pregnancy and delivery, this woman underwent a major episiotomy and gave birth to a large child of nearly 4,5 kg (Beijing, June 1981)

Robert Gorter assisted in several major dental procedures where a general anesthesia was proposed. He would apply acupuncture needles between the fingers to bring about anesthesia in the upper jaw (maxilla) and between the toes to bring about anesthesia of the jaw (mandibula). Robert Gorter expressed to friends that through his studies of the scientific works by Johann Wolfgang Goethe we has able to understand where he had to insert the needles. Without exception, all dentist and oral surgeons testified that they were amazed how elegant this method was and more importantly, there was practically no bleeding! This is very important for a dentist as minor surgical interventions in the mouth cause massive bleeding: these bleedings hamper a good view and optimal interventions like implantations etc..

One thought on “Robert Gorter as a licensed acupuncturist”