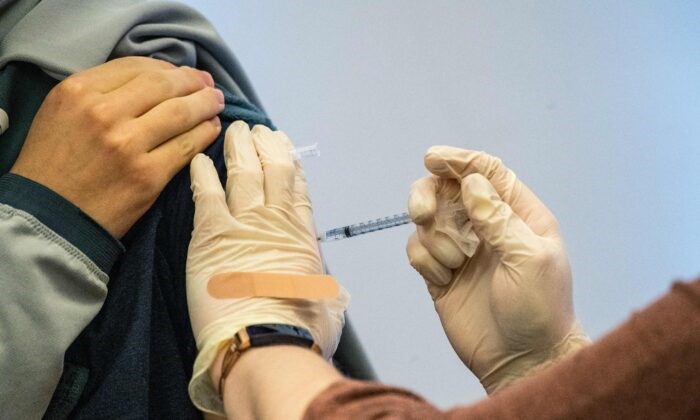 An adolescent receives a Pfizer-BioNTech COVID-19 vaccine at a hospital in Hartford, Conn., on Jan. 6, 2022. (Joseph Prezioso/AFP via Getty Images)

Heart muscle inflammation (myocarditis) following COVID-19 vaccination was much higher than expected (sic) in multiple age groups and was particularly pronounced in young men, according to a new data analysis from the Centers for Disease Control and Prevention (CDC) researchers.

Analyzing records submitted to the Vaccine Adverse Event Reporting System (VAERS) between December 2020 and August 2021, the researchers found that young males aged 12 to 17 were the most likely to suffer post-vaccination myocarditis, a form of heart inflammation that often leads to death or life-long disabilities, leading to being bound life-long to a wheelchair.

European data show a huge increase of many severe toxicities like myocarditis and deaths from September 2021 onwards.

The rates were the highest after the second dose and after vaccination with the Pfizer-BioNTech jab. Males aged 12 to 15 experienced 70.7 myocarditis cases per million doses administered and males aged 16 or 17 experienced 105.8 cases per million doses, according to the peer-reviewed study, published recently in the Journal of the American Medical Association (JAMA).

Some experts have called for U.S. health officials to recommend certain youth get the second shot of the primary regimen months after the first because of the elevated risk of heart inflammation but officials have thus far refused to adjust the scheduling recommendation, which is around three weeks for Pfizer’s shot and a month for Moderna’s jab.

Both vaccines are built on messenger RNA technology.

CDC researchers say most post-vaccination myocarditis cases eventually resolve but that they’re investigating reports of two deaths among people younger than 30 which may be linked to the vaccines. The reports have been under investigation since at least November, according to a presentation (pdf) delivered to the agency’s vaccine advisory panel that month.

Myocarditis was not identified as an issue in clinical trials but has since emerged as one of the most severe side effects following Pfizer or Moderna vaccination, with much higher-than-expected rates among young men and some young women.

The CDC is working on studying the long-term impact of post-vaccination myocarditis. We think this is all too late: severe side effects should have been studied in a regular way which takes 3-4 years.

The condition often prevents youth from participating in competitive sports for at least three months and cardiac MRIs showed abnormal results for about a quarter of a subset of cases three months after presentation, Dr. Matthew Oster, a CDC researcher, told the advisory panel on Nov. 2, 2021.

Oster, who worked on the newly published study, protected the pharmaceutical industry by writing in an email that post-vaccination myocarditis “appears to be high” but that it’s “still an extremely rare condition.” This statement has been nullified by recent European and USA data.

We strongly disagree as it is well-studied that approx. 1-2% of all severe side effects and deaths are being reported to VAERS. Thus, the „dark numbers“will be at least 50 times higher…..

Oster and a CDC spokesperson alleged that the risk of myocarditis is higher for all age groups from COVID-19 than from the vaccines, but the agency passed on studies and presentations that date no later than the Nov. 2 meeting. The CDC’s webpage on myocarditis and pericarditis, another form of heart inflammation, following COVID-19 vaccination has not been updated since Nov. 12, 2021. Coincidence?

Since then, outside researchers have found that the risk of heart inflammation was significantly higher from Moderna’s vaccine than COVID-19 for people younger than 40 and that young men are more likely to get myocarditis after receiving the second shot of Pfizer or Moderna’s vaccine, or the Pfizer booster, than from COVID-19.

VAERS is a passive reporting system that is maintained by the CDC and the Food and Drug Administration, which encourage health care workers to report post-vaccination adverse events. Patients and loved ones can also submit reports. Both in the USA and in the EU, multiple studies show nevertheless, that the reporting takes place only in 1-2% of all cases.

Researchers identified 1,991 reports of myocarditis submitted to VAERS in the timeframe studied, during which over 354 million doses of Pfizer or Moderna shots were administered. Only 1,626 reports met the case definition of myocarditis, and those were analyzed for the study.

“Therefore, the actual rates of myocarditis per million doses of vaccine are likely 50 to 100 times higher than estimated,” they said.

Pfizer and Moderna didn’t respond to requests for comment: a coincidence?

In another study published this week, as a correspondence to The New England Journal of Medicine, researchers said they analyzed a surveillance system managed by the Israeli Ministry of Health and found 18 cases of myocarditis leading to hospitalization following Pfizer vaccination of approximately 731,000 doses to 12- to 15-year-olds, some of whom received a second dose.

Two cases were excluded because of “reasonable alternative diagnoses,” one was said to have actually occurred in an unvaccinated individual (but might have been victims to shedding of spike proteins by vaccinated friends and family members), and two were deemed “unlikely to be related to the vaccine.” The 13 other patients were all discharged from the hospital after a mean duration of 3.1 days.

“In conclusion, the incidence of myocarditis leading to hospitalization among adolescents who received the second dose of the BNT162b2 vaccine was low but was higher than among recipients of the first vaccine dose and proportionately numerically higher than in recent estimates of incidence among unvaccinated persons,” the scientists said.

In the EU, since September 2021, there is an approximately 900% increase in the number of deaths among people under 30 years of age due to myocarditis and blood clotting in the heart, brain, lungs, etc., and who had all been vaccinated.

The German government (RKI) updated its guidelines for vaccinations with the experimental mRNA based vaccinations under the following title:

Scientific justification of the STIKO for the recommendation to use only Comirnaty for the COVID-19 basic immunization and booster vaccination for those under 30 years of age:

It has been known since spring 2021 (sic) that myocarditis and/or pericarditis and systemic blood clotting occurs in connection with the use of the mRNA vaccines Comirnaty and Spikevax, particularly in boys and young men. Based on these reports, STIKO reviewed its recommendation for COVID-19 vaccination with Spikevax and Comirnaty and carried out the renewed risk-benefit analysis published in Epidemiologisches Bulletin 46/2021 (PDF, 3 MB, Datei ist nicht barrierefrei) on the basis of currently available data.

Currently, all persons under 30 years of age should not be vaccinated with MODERNA but with Comirnaty instead. Data show that there is practically no difference between the incidence of life-threatening toxicities between both vaccinations, the German government nevertheless choose Comirnaty above MODERNA as otherwise, there would have been essentially no vaccine available anymore for all individuals under age 30.

Independent scientists and clinical researchers alike are puzzled by the logic of these decisions……..