Health professionals speak out on why they would rather lose their jobs than take a COVID-19 vaccine – “On this side of heaven we have an abundance of job opportunities, but only one life” 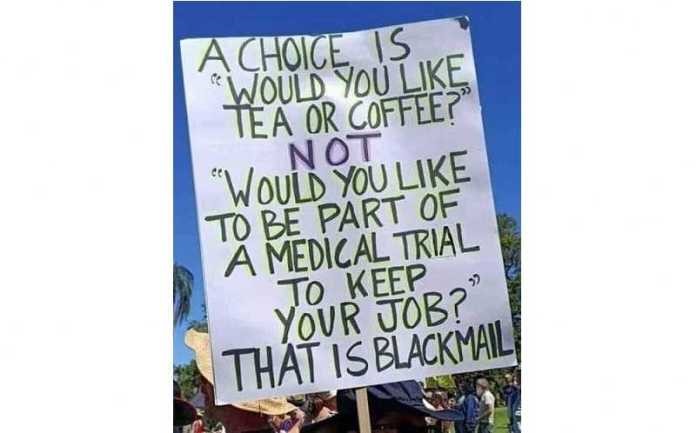 Despite the fact that the COVID-19 vaccines have been promoted by the mainstream media and most governments alike, as safe and effective, many health professionals are refusing to take them, and those who openly speak out about their concerns are being censored by big tech companies or kicked off their platforms, reports Theepochtimes.com

Some nurses and doctors refuse vaccination mandates, even if their refusal will cost them their jobs.

The Epoch Times reached out to some of these health professionals to see why.

“Impossible to give fully informed consent”

Emily Nixon is a licensed nurse who has worked in the health care sector for 18 years. When her employer, MaineHealth, announced that the vaccine would be mandated, she quickly organized a group called The Coalition for Healthcare Workers Against Medical Mandates and filed a lawsuit.

“Thousands of healthcare workers have and will lose their jobs. Maine’s already weak health care infrastructure will not be able to withstand this devastating loss of staff. Lives will be lost. Healthcare is already being rationalized. We’ve had a media blackout in this state,” Nixon said.

“Speaking from my standpoint, an intelligent, healthy, and empowered health professional who takes excellent care of himself, it is an insult to expect that I would accept an injection of unknown substance and efficacy and set an example to the public that I serve that too they have to hand over their power to drug companies – convicted to criminals – in an effort put a bandage on the gaping wound of reality.

It is unscrupulous to oblige injections without exception, especially when the injection is a brand new medical product that is still in its first year of research. Breakthrough cases are not properly reported. We know this vaccine is a ‘leak’. The safety and effectiveness of this vaccine have not been established. There are other safe and alternative treatments. It is impossible to give fully informed consent without long-term unbiased data. Threatening our jobs is shameless coercion. Our God-given right to bodily integrity and personal autonomy has been stripped of these mandates and we will not agree to them,” Nixon said.

The side effects are real

Jaclyn Zubiate, who worked for Southern Maine Health Care, loved her job as a nurse.

“I didn’t take the vaccine even though I’ll be fired…Now with the data we have, we know the survival rate is quite high. In the past 18 months, I’ve only sent one patient to the ER with breathing problems. COVID is not different from other viruses like other diseases for which we have vaccines. Why would I need a vaccine for something with a 99 percent survival rate that has no distinguishing features?” says Zubiate.

“Health professionals don’t take it because they know the side effects are real. In the emergency room, I have seen myocarditis, cellulitis, and unusual neurological symptoms, among a variety of other side effects. I have seen people who were very sick after being vaccinated and then tested positive. According to recent studies and what I see in my clinic, the chance of contracting COVID in vaccines is very high. A vaccine should work, and it doesn’t. It would have to be tested on something other than humans for years before we call it “safe and effective.” There are more than 15,000 deaths from the vaccine that the media is not talking about. I will never take that risk for myself,” Zubiate says.

The data speak for themselves

Jessica Mosher has been a Registered Nurse for over a decade. She is a mother of four and a US Navy veteran who lost her job because she refused the injections.

She was a nurse supervisor, patient monitoring manager, and nursing program director at Redington-Fairview General Hospital.

“Protecting my health and staying true to my religious beliefs will always be my choice over a job. The scriptures promise that “as long as the earth endures there shall be sown and reaping”; on this side of heaven we have an abundance of job opportunities, but only one life,” says Mosher.

“I have a master’s degree in nursing and work as a professor of nursing research and evidence-based practice. I am adept at collecting and analyzing data and drawing conclusions. Before COVID-19, I didn’t rely on the media, government, or Big Tech for my healthcare decisions, and I have no intention of changing course. The data speaks for itself regarding the damage these experimental vaccines have caused and the lack of studies that have been conducted.

What I have seen as a nurse and what others have said about the effects of the vaccination rounds things off. The virus, like colds and flu, cannot be cured. However, it has a nearly 100 percent survival rate. Those who promote the vaccine follow the money. I follow the science. Healthcare workers don’t run away from their passion or stable salary to make things difficult. The number of people willing to be fired should in itself be cause for alarm,” she says.

John Lewis worked for a large hospital in southern Maine. He is pro-life and believes that all life is valuable:

“Knowing that all three available vaccines were either tested, developed, or produced using fetal cell lines derived from elective abortions, I could not in good conscience violate my deep-seated beliefs. With the expectation that I could apply for a religious waiver, it’s hard to accept that I won’t get an exemption based on my duties after considering that I’m working remotely and not interacting with patients,” Lewis says.

“Beyond the medical or religious waivers, many health professionals consider the risks and benefits of taking the vaccine. It is the same approach as inpatient care, where the patient is given informed consent. Many health professionals are naturally immune. Others feel that not enough long-term research has been done on the side effects. Also, these health professionals see with their own eyes what’s happening in hospitals, which doesn’t necessarily fit the narrative,” Lewis says.

“None of Us Sees Rises in ICU admissions”

Heather Sadler, a registered nurse, also loves being a nurse, but she says her and her family’s health is far more important than her paycheck:

“This is a new vaccine technology (if you want to call it that) that has NEVER been used successfully, and has no data on its long-term effects, not to be confused with ‘side effects, which the general public seems to hang on to. I’ve always been someone who analyzes my healthcare choices through the lens of the risk-benefit ratio. With what I know about COVID (and I’ve done a lot of research), I don’t fall into any of the high-risk categories for serious illness/death: over 65, obese, heart disease, diabetes, chronic lung disease, and immunocompromised. For me and my immediate family, there is a greater risk of side effects or long-term effects from injecting a virtually unknown substance into ourselves,” Sadler says.

“I am a nurse in oncology/hematology and I see that we are seeing an increase in hospital admissions/referrals for clotting and bleeding disorders. For example, in one week we had two patients in the hospital who were diagnosed with a rare clotting disorder… And this happened twice in one week in rural central Maine. The only common factor, a COVID injection three days before in both cases. Has this been reported to the CDC? I don’t know.

Only 4 out of about 20 to 25 people I personally know who tested positive for COVID were unvaccinated. Yes, unvaccinated. The majority of people in my area who have tested positive in the past three months have been fully vaccinated. Why would I want to risk side effects or long-term effects from the shot if I can still contract and spread this virus? It just doesn’t make sense. These two examples make it clear that their theory that ‘it is safe and effective’ is wrong,” said Sadler.

“I am in constant contact with other health professionals in the state of Maine and none of us is seeing the dramatic ‘rises’ of ICU admissions among unvaccinated people that the general public is being told are happening.

This is America! I have the right to make an informed decision about my healthcare. No matter what you are told, what I do will not affect you directly,” Sadler says.

Freedom is the most important

Sherri Thornton served as a member and chair of the Maine SAFE advisory board and has been a nurse for 45 years.

She planned to retire, but wanted to continue working until the end of the year; however, when she saw the mandate coming, she decided to retire early.

“I believe that freedom is the most important thing in life outside of salvation. No one has the right to tell me what to do or not to do with my body except the Lord. The vaccines are made from fetal tissue, and I am strongly against abortion,” said Thornton.

“The components of the vaccines are not safe. There are many side effects that cause more damage than coronavirus. It does not protect against the variants. … Vaccinating everyone will not provide herd immunity and will only create more variants that those without natural immunity will succumb to,” says Thornton.

Three other health professionals who oppose the vaccination have contacted The Epoch Times but did not want their names or employers to be disclosed.