I am Dr. Asim Mansour and an Oncologist with university affiliations in Egypt and Jordan. I conduct clinical research and bed-side teaching. I did one of my most remarkable clinical rotations as a senior medical student at Dr. Robert Gorter’s clinic in Cologne in Germany and that made me decide to follow in his footsteps and dedicate my professional life to non-toxic treatments of cancer in all stages of their disease: unfortunately, I am not as good as what I have been able to witness with Dr. Gorter’s patients when he was in charge…….

I want to take a position towards the vicious acquisitions of Jeannine Walston who was in her late twenties at that time and became a patient of ours at Medical Center Cologne in Germany ca. 2007-2009.

Off and on, she came to Dr. Robert Gorter with a fatal brain tumor with a life expectance of less than one year. She initially came with her mother and after extensive consultations with Professor Gorter and speaking with similar patients at the clinic, Jeannine and her mother decided that she would stay and get treated. But, the family had little money to pay and the USA insurance company would not reimburse. It was then decided that Jeaninne would still be treated for practically free of charge and she would “payback” by writing about the clinic: reporting on her own treatments and how she experienced being treated according to the Gorter Model protocol (like Professor Kinarthy from Vancouver started to do two years later). And, secondly, she would initiate a site online with frequently asked questions (FAQ).

Professor Elior Kinarthy who wrote a book on the extremely successful non-toxic treatment of his end-stage prostate cancer by Dr. Gorter and his team. He met many men in similar stages and he was blown away that he met multiple men like him who were already 10-15 years in complete remission

Only very recently, I came across this video made of Jeannine after roughly 3 months into therapy. The video was meant to be one of several short interviews at 2-4 weeks intervals and follow a patient while on therapy.

As a senior medical student, doing my post-graduate rotations, I witnessed many cancer patients from all over the world with all possible malignancies in their final stages that recovered completely and are still alive after 10-18 years.

Also, in the large teaching hospital where Dr. Gorter’s clinic was located, a certain pharmacologist named Cornelius (Cees) Kleinbloesem was present and under his responsibility, patients were treated with autologous (patients’ own) mesenchymal stem cells for tissue repair.

In this period of time Jeannine Walston, as a patient of Dr. Gorter, met Kleinbloesem in the same teaching hospital. Kleinbloesem was in dire need to have a journalist write very positive about him as, since 2007, Kleinbloesem started to get more and more negative press.

After Jeannine was successfully treated by Dr. Gorter (she is still alive and well as far as I know), she changed against Dr. Gorter with false acquisitions.

In April 2011, the health authorities in Germany shut down a large clinic owned by Kleinbloesem that had been peddling unproven stem cell treatments for a variety of physical disorders, including cerebral palsy, Parkinson’s disease, and spinal cord injury. The XCell clinic had taken advantage of a loophole in European regulations that allowed some treatments already in use when the law took effect to continue for 18 months without formal approval. That grace period ran out in January 2011, however, and German authorities apparently shut down the clinic in late April.

Local authorities are also investigating possible criminal charges against the clinic’s administration and one of its doctors following two cases in which the treatment went very wrong. In October, an 18-month-old boy died after doctors at the clinic injected stem cells into his brain. A few months earlier, a 10-year-old boy almost died after undergoing similar treatment. He is now more severely disabled than before the therapy. The clinic charged more than 3000 patients up to €28,000 each for its services at a time. Often, it was strongly advised to have stem calls applied multiple times……

The clinic’s founder, Dutch clinical pharmacologist Cornelis Kleinbloesem, moved to Germany after his previous clinics in Leuvenheim, the Netherlands, and in Ghent, Belgium was shut down by respectively the Dutch and Belgian authorities in 2003 and 2006. Then, XCellCenter had operations for the rich and fancy in Düsseldorf and Cologne, Germany. 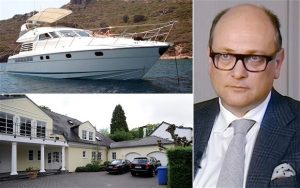 Cornelis Kleinbloesem (who was also prosecuted and convicted by Swiss courts for fraud and damaging study participants in early pharmacokinetic studies in healthy volunteers. His business partner Pawan Seth was convicted too but is currently living like a millionaire in California.

Cornelius Kleinbloesem asked Jeannine Walston to work for him and write as negatively as possible about Dr. Gorter. She was (is?) paid very well for her writing as a journalist. In an extensive conversation with an undercover detective of the investigational team of the police in Cologne, it was documented on tape, his plans to force Dr. Gorter to quit his clinic and Kleinbloesem could take over and put one of Dr. Gorter’s doctors in charge of his clinic: XCellCenter. Also, Kleinbloesem reported to the detective in under-cover that he already hired a hitman to kill or severely damage Dr. Gorter so that Kleinbloesem could take over Dr. Gorter’s clinic. I know that Dr. Gorter lived almost a year 24 hours per day with an Arabic speaking bodyguard from Egypt. The rumors in the clinic were that President Mubarak from Egypt had put one of his multiple bodyguards in the clinic (but at that time, nobody knew exactly why: now I understand)

Two years later, Cornelius Kleinbloesem had to stop with his clinic in Cologne and in Düsseldorf (for rich patients only). Several patients, among them little babies and infants, died immediately during or after the treatment with stem cells in Düsseldorf.

The whole story can be easily found in Google and in German newspapers.

Kleinbloesem now runs a clinic in Lebanon and seems to make again large sums of money as reflected by his luxury lifestyle. It is disturbing to me to see that a patient like Jeannine Walston, who benefitted so greatly by the Gorter Model, keeps pushing her untruths online and likely still being paid by Kleinbloesem.