Since 1984, Robert Gorter, MD, PhD, and Erik Peper, PhD, have been collaborating at San Francisco State University at Dr. Peper’s Department of Holistic Health. In 1983, Robert Gorter started working at the University of California San Francisco Medical School (UCSF) as an assistant professor at two departments at the same time: The Departments of Internal Medicine and Family and Community Medicine. In the meantime, due to his extensive medical experience in Europe and Africa, Dr. Gorter could do another residency (specialty training) in Medicine and in Family and Community Medicine.

Part of the Department of Medicine was the world-famous HIV/AIDS clinic “Ward 86” where only very few doctors and nurses wanted to work in fear of getting somehow infected. At that time, HIV was not discovered yet as the virus causing AIDS. Thus, there was great uncertainty in all fields and not many doctors were willing to take care of AIDS patients.. 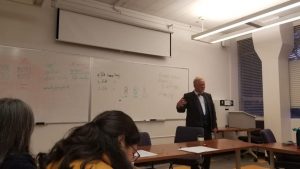 Prof. Robert Gorter lecturing at SFSU till late at night

As a guest speaker and visiting professor, Prof. Elior Kinarthy from Vancouver, Canada, joined for a few days and lectured on the “Gorter Model” (www.gorter-model.org); first as a patient who underwent the program and then secondly, as a scientist, looking at the data and reporting on them. He whole-heartedly recommends the Gorter Model to essentially all cancer patients at all stages. Prof. Kinarthy also wrote a book on the Gorter Model under the Title “My Way.” Here, he describes first of all in detail how it was to undergo the complete treatment as an end stage patient and then, secondly, all the scientific data he could find in the scientific literature, supporting the Gorter Model approach to an effective and non-toxic cancer treatment.

The official 3-Unit Class HH650 was headed by Dr. Robert Gorter and supported by Erik Peper by being present at times and actively participate in some of the questions and discussions afterwards.

In addition, Robert Gorter was invited to talk a few times in the formal SFSU Spring 2020 lecture series for another ca. 30 students.

At one of these Spring Lecture Series, Prof. Elior Kinarthy talked about the Gorter Model and his complete remission for over 10 years from end stage prostate cancer. He described how it was to be a patient, undergoing the treatment protocol and once as a scientist, collecting extensive data on the various components of the “Gorter Model” 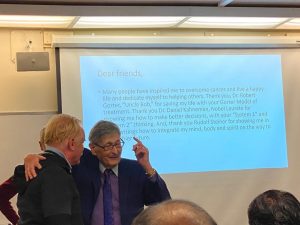 Towards the end of his lecture, Prof. Kinarthy thanked Prof. Gorter (“Uncle Bob”) that he saved his live for over 10 years by now and that the way his health is right now he expects another decennium to work and lecture around the world.

Robert Gorter lectured about 85% of the time but there were a few guest lecturers. Like Cynthia Hoven who is a therapeutic eurythmist and her husband who is a Bio-Dynamic farmer. Cynthia gave a practical session showing all call participants the principles of Eurhythmy.

Eurythmy is an expressive movement art originated by Rudolf Steiner in conjunction with Marie von Sivers in the early 20th century. Primarily a performance art, it is also used in education, especially in Waldorf schools, and – as part of anthroposophic medicine – for various therapeutic purposes. 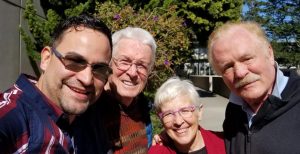 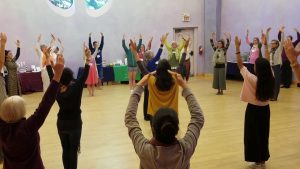 Twelve hours of classes per day were tiring but the students got what they had hoped for and expected.

Main anthroposophical concepts were discussed and examples given: