Dr. Robert Gorter on his 24th professional visit to India

The main reasons for this 24th trip to India over the last 5 years was to visit leading cancer research centers, like 1) the TATA Cancer Research Center in Mumbai; 2) the various Waldorf Schools in Mumbai and other cities; the Minister of Health in Chandigarh (capital of the State of Punjab); and speak at three different conferences on immune therapies in current oncology. 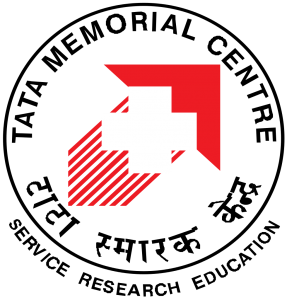 Robert Gorter visited first the Tata Memorial Hospital which is situated in Mumbai. It is a specialist cancer treatment and research center, closely associated with the Advanced Centre for Treatment, Research and Education in Cancer (ACTREC). One of the fields of specialization of this hospital is in the treatment of acute lymphoblastic leukemia (ALL). The hospital claims to treat and cure 99% of the ALL patients. This hospital is also one of the few in India to have a PET – CT scanner. At ACTREC, Dr. Gorter gave an introduction on cell-mediated immune therapies in cancer.

The Tata Memorial Centre is the national comprehensive cancer center for the prevention, treatment, education and research in Cancer and is recognized as one of the leading cancer centers in this part of the world. This achievement has been possible due to the far-sighted and total support of the Department of Atomic Energy, under Dr. Homi N Sethna responsible for managing this Institution since 1962. The Tata Memorial Hospital was initially commissioned by the Sir Dorabji Tata Trust on 28 February 1941 as a center with enduring value and a mission for concern for the Indian people. 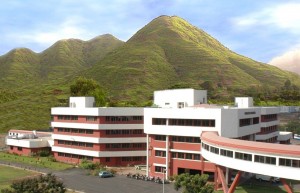 The Tata Memorial Hospital and Cancer Research Institute (ACTREC) merged as the two arms of the Tata Memorial Centre (TMC) in 1966 as a classic example of private philanthropy augmented by Government support with a mandate for Service, Education & Research in Cancer.

On October 8th, 2015, Dr. Gorter met with a few clinical researchers at ACTREC under the Chairmanship of Dr. Shubhada Chiplunkar, the general Director of ACTREC and Dr. Sudeep Gupta, Head of the Department of Surgery, and several other senior doctors in leading positions. 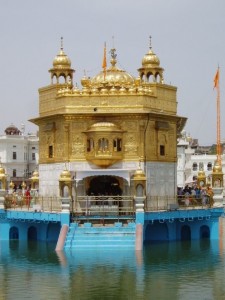 The Harmandir Sahib and informally referred to as the “Golden Temple”, is the holiest Sikh gurdwara located in the city of Amritsar, Punjab, India.

The city was founded in 1574 by the fourth Sikh guru, Guru Ram Das. The Harmandir Sahib was designed by the fifth guru, Guru Arjan, who had the cornerstone laid by the Muslim Sufi saint Sai Hazrat Mian Mir on 28 December 1588. Guru Arjan completed the Adi Granth, the holy scripture of Sikhism, in 1604 and installed it in the gurdwara.

There are four large doors symbolize the openness of the Sikhs towards all people and religions. The present-day gurdwara was rebuilt in 1764 by Jassa Singh. In the early nineteenth century, Maharaja Ranjit Singh secured the Punjab region from outside attack and covered the upper floors of the gurdwara with gold, which gives it its distinctive appearance and its English name. 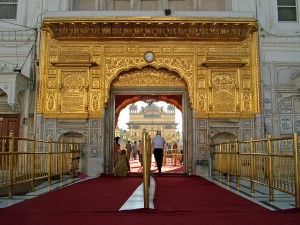 The Harimandir Sahib is considered holy by Sikhs. The holiest text of Sikhism, the Guru Granth Sahib, is present inside the gurdwara during daytime and the holy book goes for Sukhasan during the night time. Its construction was mainly intended to build a place of worship for men and women from all walks of life and all religions to come and worship God equally.

Over 100,000 people visit the holy shrine daily for worship, and also partake in the free community kitchen and meal (Langar) that is a hallmark of all Sikh Gurudwaras.

From Amritsar to Chandigarh

From Amritsar, Robert Gorter went to Chandigarh to meet the Minister of Health to discuss two areas of possible collaboration:

Dr. Gorter had email letters exchanged with (he thought) the Minister of Health but it turned out to be his son-in-law who is responsible for bottling drinks and food packaging. He is a businessman and saw great opportunities in make good money with anything which had to do with health industry (fitness and cancer patients). The Minister of Health was actually the Chief Minister (CM) himself but is too old to function in that position. Thus, his eldest son took four ministries to run, including the Ministry of Health. To get an appointment with the CM’s son, who is vice CM and head of four ministries, was a hard call to get in a few weeks. Thus, Dr. Gorter decided to refrain from further pursuing these appointments. 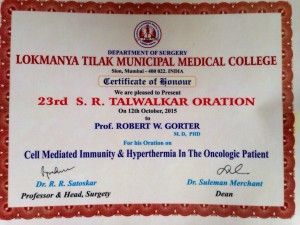 Dr. Gorter lectured at the municipal Medical School in Mumbai on October 12th 2015. He was honored to speak as the 23rd invited distinguished speaker as part of the S.R. Talwalkar Oration series at the Department of (Onco-) Surgery.

The title of the lecture was “Cell Mediated Immunity and Hyperthermia in the Oncologic Patient” and his 90 minutes lecture was quite well received. Because of the discussion afterwards, sometime was spent on Chronobiology and variation in rhythms.

Afterwards, a lunch box was shared and about 75 doctors and residents-in-training shared lunch and got involved in some more questions and social talk.

Further on, Dr. Gorter lectured at a few other hospitals and a conference at the famous Saifee Hospital in Mumbai. Usually, the content of his presentations had as a central theme Cell Mediated Immunity, chronobiology and hyperthermia.

After one of the conferences, which was held to discuss the interaction of the psyche and the immune system, some of the psychologists who attended or gave presentations invited Dr. Gorter to join them for dinner.

Prof. Dr. Robert Gorter having dinner with psychologists and doctors

KARMA: In the conference at Saifee Hospital in Mumbai, India, on October 25th, 2015, Dr. Gorter met an anthroposohic doctor he knew form a seminar in Arlesheim, Switzerland and never met again since 1996. The encounter was very warm.. 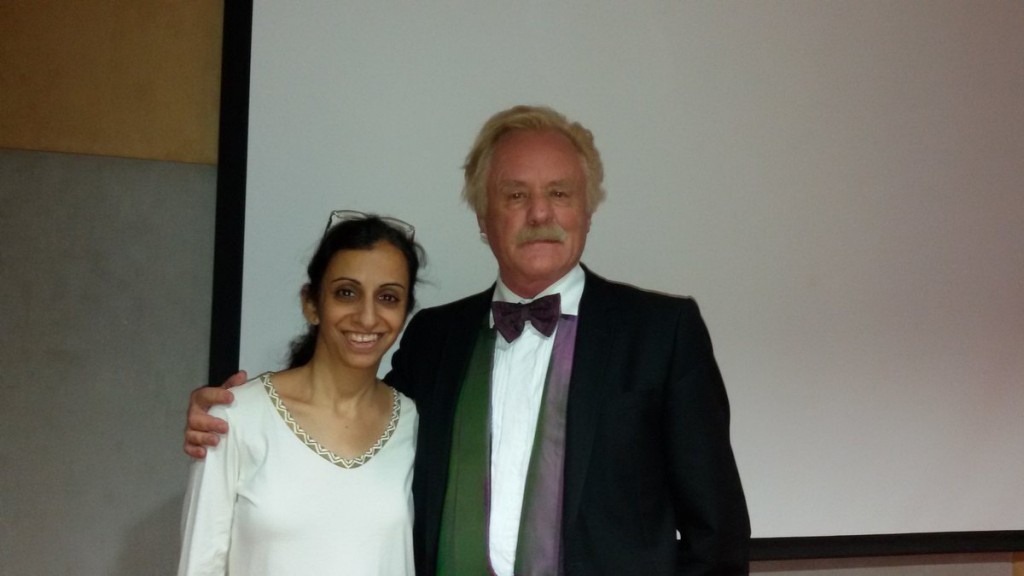 Dr. Gorter met an anthroposohic doctor in a conference at Saifee Hospital in Mumbai, India (2015)

We found a picture of Dr. Gorter sitting at the dinner table in the Lukas Klinik in Arlesheim, Switzerland. In this picture, to the far left is Matthias Stoss, MD, and between Matthias and Robert Gorter is sitting the Indian doctor from Mumbai (1996). 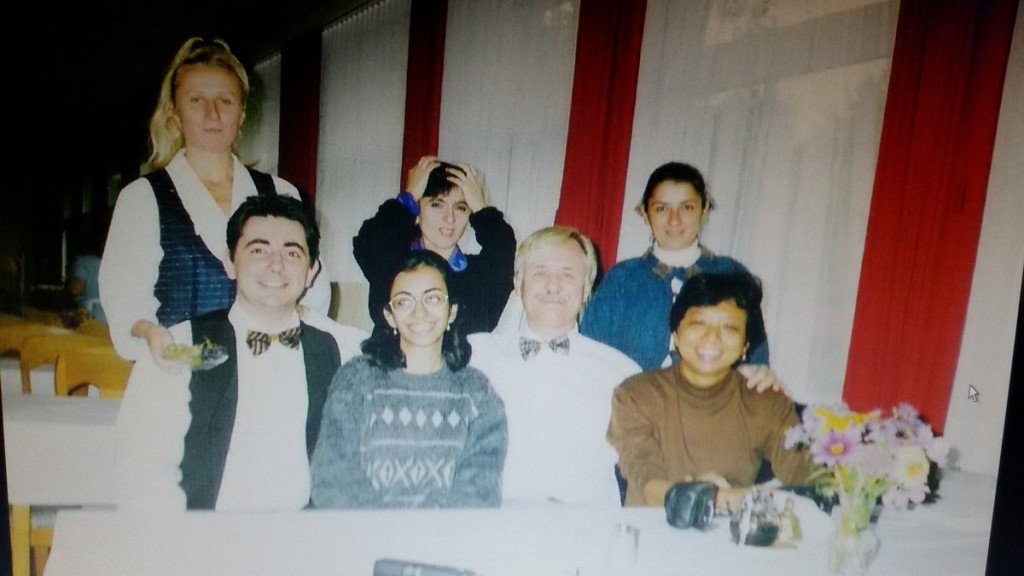 Left Matthias Stoss, MD, and between Matthias and Robert Gorter is sitting the Indian doctor from Mumbai (1996)

During his visit to the Tridha Rudolf Steiner School in Mumbai-Andheri, Dr. Gorter watched this mid-morning celebration of Genesh festival for the youngest when they get some bread or cookies and curd and sing together. 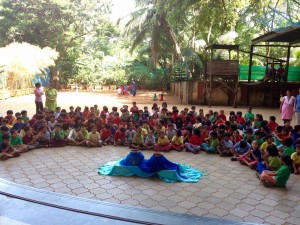 Dr. Gorter also visited the Inodia Waldorf School in Mumbai twice and on one of the occasions, he met with parents and teachers and participated in an one-hour discussion where he addressed many questions regarding health and common childhood diseases.