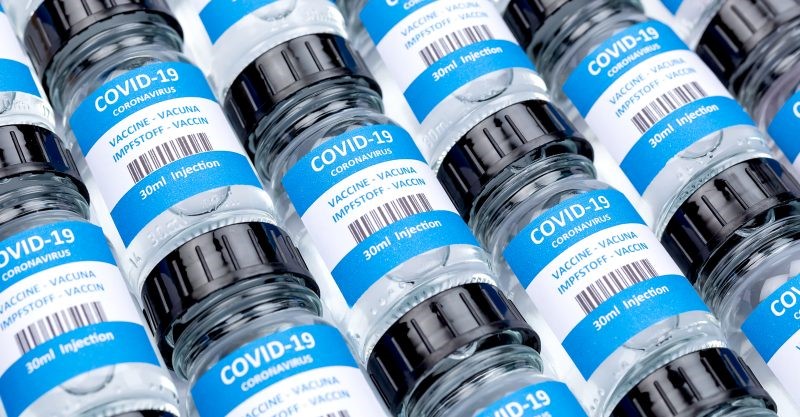 The number of reported deaths following COVID-19 mRNA vaccines topped 4,000 according to data released today by the Centers for Disease Control and Prevention (CDC). The data comes directly from reports submitted to the Vaccine Adverse Event Reporting System (VAERS).

VAERS is the primary government-funded system for volunteering reporting adverse vaccine reactions in the U.S. Reports submitted to VAERS require further investigation before a causal relationship can be confirmed.

Every Friday, VAERS makes public all vaccine injury reports received as of a specified date, usually about a week prior to the release date. Today’s data show that between Dec. 14, 2020, and May 7, a total of 192,954 total adverse events were reported to VAERS, including 4,057 deaths — an increase of 220 over the previous week — and 17,190 serious injuries (needing hospitalization), up 1,176 since last week. 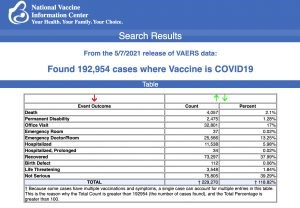 21% of deaths were related to cardiac disorders.

54% of those who died were male, 44% were female and the remaining death reports did not include the gender of the deceased.

As of May 7, 2021, 987 pregnant women reported adverse events related to COVID vaccines, including 297 reports of miscarriage or premature birth.

CDC finds’s ‘plausible’ link between the J&J vaccine and blood clots on May 13, 2021, The Defender reported officials with the CDC acknowledged a “plausible causal association” between J&J’s COVID-19 mRNA vaccine and potentially life-threatening blood clot disorders after identifying 28 cases — including three deaths — among people who received the vaccine.

Shimabukuro said four of the 28 people remained in the hospital as of May 7, 2021, one of whom was in the ICU. Two were discharged to a post-acute care facility, 19 patients were discharged and three resulted in deaths.

Current evidence “suggests a plausible causal association” with the J&J vaccine and cases of thrombosis with thrombocytopenia syndrome, Shimabukuro said. The CDC’s Dr. Sara Oliver said the benefits of the vaccine still outweigh the risk and no updates to vaccine policy are needed at this time (!!).

Children’s Health Defense queried the VAERS data for adverse events associated with the formation of clotting disorders and other related conditions and found 3,272 reports for all three vaccines from Dec. 14, 2020, through May 7, 2021.

NPR reported May 10 the U.S. Food and Drug Administration (FDA) said children 12 to 15 years old are now eligible to be vaccinated for COVID-19 as the agency expanded its Emergency Use Authorization (EUA) for the Pfizer-BioNTech vaccine.

But what risk do teenagers have once they get exposed and infected by SARS-CoV-2 (COVID-19)?

Pfizer submitted an amendment to their current EUA for an unapproved product on April 9 to expand the use of its vaccine for adolescents ages 12 to 15 — with only six months of clinical data (SIC).

“Parents and guardians can rest assured that the agency undertook a rigorous and thorough review of all available data, as we have with all of our COVID-19 mRNA vaccine emergency use authorizations,” Dr. Janet Woodcock, the acting FDA commissioner, said.

Until now, Pfizer’s vaccine had been authorized only for people age 16 and older. The company said it plans to seek new EUA expansions for kids younger than 12 in September, with an expansion aimed at infants and toddlers during the fourth quarter this year.

On May 13, 2021, CNN reported a CDC expert said Wednesday it’s OK to give an experimental COVID vaccine in conjunction with other vaccinations.

Doctors and other clinicians were previously advised against giving a COVID-19 mRNA vaccine within two weeks of any other vaccine, but Dr. Kate Woodworth of the CDC’s birth defects division said Wednesday that advice has now changed —saying there is substantial data on the safety of the vaccines.

Woodworth said the clinical considerations are being updated to say that COVID-19 mRNA and other vaccines can be administered “without regard to timing,” including on the same day.

Teen hospitalized with blood clots in the brain after Pfizer Vaccine

On May 10, 2021, The Defender reported a Utah teen remains hospitalized with blood clots in his brain after receiving his first dose of Pfizer’s COVID vaccine.

Everest Romney, 17, received the vaccine on April 21 and one day later began experiencing neck pain, fever, and severe headaches. After more than a week of symptoms and being unable to freely move his neck, he was diagnosed with two blood clots inside his brain, and one outside.

Romney’s mother didn’t want to discourage parents from getting their kids vaccinated because she believes each parent must make the decision for their children, but said she wished her choice had been a different one.

The Utah Department of Health said the CDC is tasked with investigating possible vaccine side effects. After administering nearly 100 million doses of Pfizer’s vaccine, the CDC reported there hasn’t been a single related case of a blood clot forming in the brain as of April 12, 2021.

On May 12, 2021, The Defender reported that Brazil’s federal government suspended AstraZeneca’s vaccine for pregnant women after an expectant mother in Rio de Janeiro died from a stroke possibly related to the vaccine. The 35-year-old woman, who was 23 weeks pregnant, died of a hemorrhagic stroke after checking into a hospital five days earlier.

Slovakia also announced Tuesday it was suspending AstraZeneca’s vaccine for first-time vaccinations after a 47-year-old woman died from cerebral venous sinus thrombosis — a blood-clotting disorder where clots form in the veins that drain blood from the brain — connected to the shot.

“Genetic examination also revealed blood-clotting disorders in the patient,” the regulator said. “Due to the existence of a genetic predisposition to a thrombophilic state, an association between [the AstraZeneca jab] and subsequent venous sinus thrombosis was established as likely,” it added.

As The Defender reported May 12, 2021, new research published in The BMJ confirmed evidence of blood clotting and found a small risk after receiving just one dose of AstraZeneca’s vaccine.

Researchers investigated the likelihood of blood clotting events for 282,572 people in Denmark and Norway. Using data from healthcare registries, they reviewed information on people 18 to 65 years old who received their first dose of AstraZeneca between Feb. 9, 2021, and March 11, 2021.

Dr. David Williams, chief medical officer of health for the Province of Ontario, made the decision out of an abundance of caution and due to an increase in cases of Vaccine-Induced Immune Thrombotic Thrombocytopenia (VITT) — an otherwise rare, potentially fatal blood clotting syndrome linked to the AstraZeneca vaccine.

Norway will not use AstraZeneca vaccine, J&J paused

As The Defender reported May 12, 2021, Norway will not resume use of the AstraZeneca vaccine due to concerns of rare blood clots reported in some patients after their first dose, while the J&J vaccine remains on hold. An expert committee, set up by the Norwegian government, conducted a comprehensive risk assessment of the two vaccines and recommended AstraZeneca & J&J’s vaccine be dropped from Norway’s vaccination program.

“We do not recommend that the vaccines be used in the national vaccination program due to the serious side effects that have been seen,” chair of the expert committee, Lars Vorland, said.

Denmark was the first country in Europe to officially drop AstraZeneca and J&J’s vaccines due to the risk of blood clots, but many other countries have restricted the use of AstraZeneca in certain age groups.

As The Defender reported May 12, 2021, we have made repeated attempts to contact the CDC with a list of questions about COVID-19 mRNA vaccine injury reports in VAERS, including ongoing investigations into reported deaths. Our questions remain persistently unanswered.

On March 8, 2021, The Defender contacted the CDC with a written list of questions about reported deaths and injuries related to COVID vaccines. We requested information about how the CDC conducts investigations into reported deaths, the status of ongoing investigations into deaths and injuries reported by the media, if autopsies were being conducted, the standard for determining whether an injury is causally connected to a vaccine, and education initiatives to encourage and facilitate proper and accurate reporting.

After repeated attempts, by phone and email, to obtain a response to our questions, a health communications specialist from the CDC’s Vaccine Task Force contacted us on March 29, 2021 — three weeks after our initial inquiry.

The Defender also followed up with the CDC’s media department, which told us the COVID response unit would be informed that the health communications specialist never responded. No explanation was given as to why our inquiries were ignored. We were told to call back, which we did numerous times.

We asked why the taxpayer-funded CDC seemed to respond to other news media outlets in a timely manner but has not responded to The Defender. No answer was provided. We were told someone would get back to us.

It has been 67 days since we sent our first email inquiring into VAERS data and reports, but still no response.

Children’s Health Defense asks anyone who has experienced an adverse reaction, to any vaccine, to file a report following these three steps.