How Best to End the Current System of Debt Servitude

James Corbett Breaks The Set on The Federal Reserve

This video is one of many where financial and economic experts bringing good arguments and facts about the notion that the Federal Reserve (FED) is “too big to fail” (like the Lehman Brothers which collapse started the global financial crisis five years ago).

Upon asking my friends, who are all well-educated citizens and academics in the USA, 98% assured me that the FED represents the government of the US and its treasury. It would set the policies in accordance to the intent of the US administration.

But the FED is not.

The Fed is a completely private institution with about 200 shareholders dictating and monopolizing the economic and social policies of the US government and its 6% dividend on any dollars they print is guaranteed by US tax payers.…

The names of the shareholders are unknown but Robert Gorter knows a few among them, including the Rockefeller and the Kennedy Clans as well as the Bank of America.

The FED has its own website and there is in a “hazy” way described what the FED is all about and that they pay each other 6% of anything they print and these 6% are guaranteed by the US tax payers. There have been months that they printed 80 billion dollar per months for money easing…. with nothing against it but hot air.

During a meeting with the 27 member states of the European Union and the Treasurer of the US Federal government in the presence of representatives of the FED:

“We have the dollar and it is your problem!” 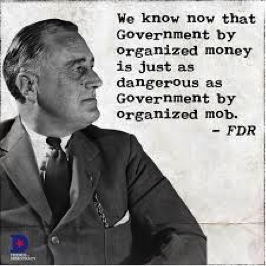 Franklin Delano Roosevelt (1882-1945), commonly known by his initials FDR, was an American statesman and political leader who served as the 32nd President of the United States from March 4th 1933 till April 12th 1945. This quote is from FDR when he refers to the Federal Reserve…..

Interesting official website to inform the US public about its history and dealings by the FED itself: www.federalreserve.gov

Read also: ROBERT GORTER ANALYZES THE ROLE OF THE US FEDERAL RESERVE