Robert Gorter, MD, PhD. (with thanks to Frontnieuws) 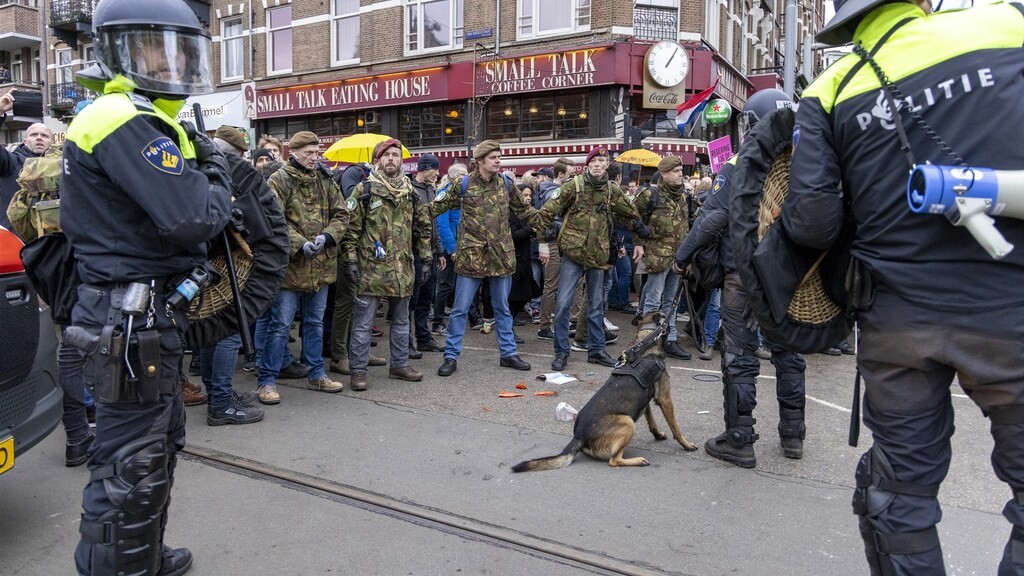 Everywhere in the city of Amsterdam, there were veterans to protect the peaceful demonstrators in Amsterdam (January 3rd, 2022) against the most brutal attacks by the police with sticks and very aggressive dogs. 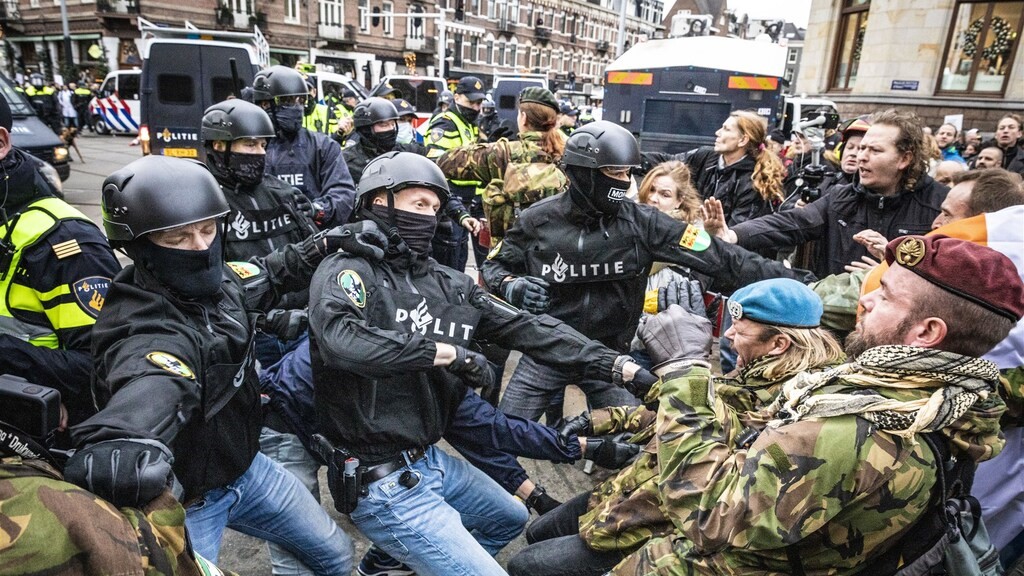 Veterans in Amsterdam (NL) protect peaceful demonstrators against the brutal police force and there were testimonies that several of these „policemen“ in black were of foreign origin because they could not speak Dutch but did communicate among themselves in Arabic. Were they mercenaries  as part of the EU Police Force which is directly under the command of Brussels?) (December 23, 2022)

This is just the beginning: more and more policemen, soldiers, officers, and members of special forces are turning against the murderous policies of the New Germany: a country that within 30 years of its de facto takeover by the Stalinist GDR (camouflage term: “reunification ”) has turned into an authoritarian-dictatorial system modeled on Bolshevism. 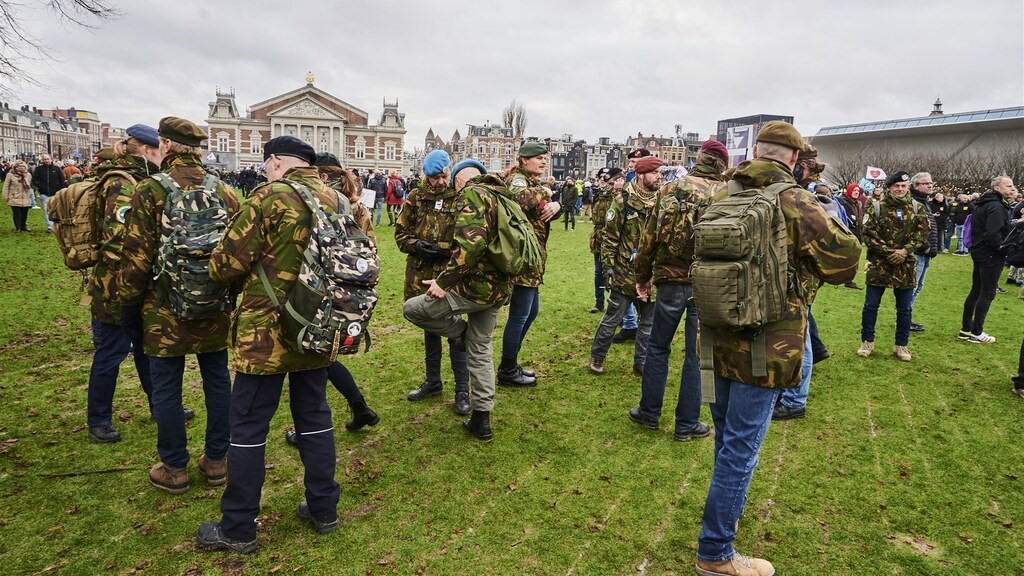 Veterans getting ready to protect the Dutch population against the brutal police force including many police officers of non-Dutch origin.

Munich: After his arrest for a “threatening video”, a Bundeswehr soldier is free again. According to a police spokesperson, the responsible public prosecutor saw no reason to arrest. In the opinion of the authority, the man does not pose an imminent danger. However, the investigation is continuing because he is alleged to have publicly been called for criminal offenses. In a video, the man had, among other things, called for resistance to the Corona measures and discussed a warning to the German government. According to information from the BR, the man is 29 years old and stationed in the Hochstaufen barracks in Bad Reichenhall. (Source: BR24 News, 31.12.2021)

“The Bundeswehr soldier was arrested on Thursday evening at the Odeonsplatz in Munich after he made threats against the state in an internet video. In the video clip, which lasts about a minute, the man, who calls himself a sergeant first class, demands, among other things, the withdrawal of the state Corona measures and the toleration obligation, according to which the covid vaccination became a requirement at the Bundeswehr.

One can be sure that the reason for his release lies much more in the panic of the political clique of criminals that the officers in Germany would show solidarity with the sergeant first class and they would lose the support of the Bundeswehr. Because not only in the Bundeswehr, but also in all police units in Germany, in the Reich Police and, as you will read in a moment, even in the Special Forces, the mood has turned dramatically against the politicians. There is still a democratic core in Germany that could overthrow this dictatorial system. 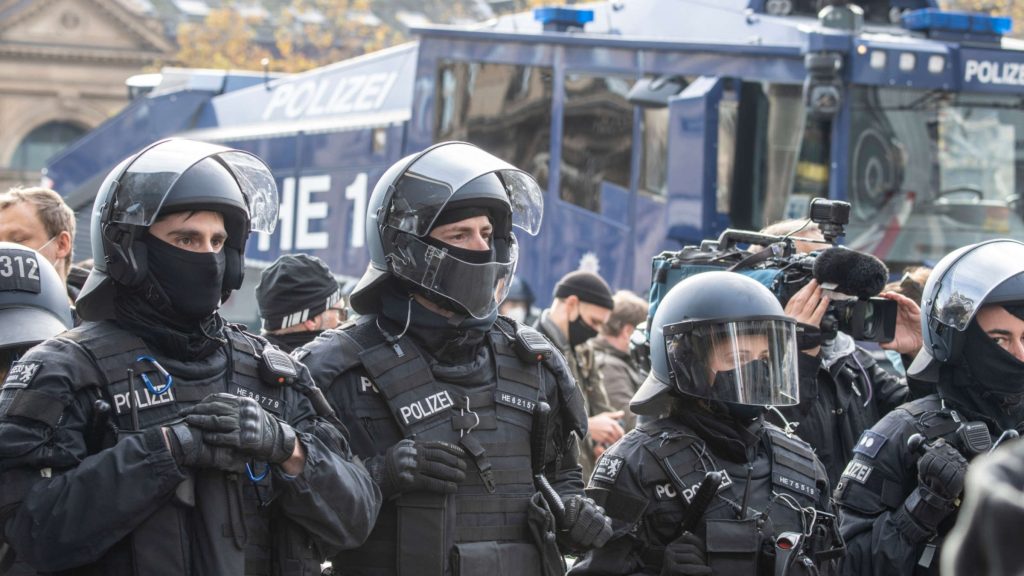 All over Europe, the police force has been militarized and also made practically anonymous

Germany is one of the hotspots of the New World Order. And those who still accuse the Germans of cowardice and submission have no idea what is really going on in this country. On one day alone in the past week, simultaneous demonstrations against the brutal oppression system took place in 915 towns, communities, and cities. In no other country in the world is there such a massive demonstration against the NWO clique of politicians. It need not be reported here that all this is being concealed in the German mainstream media. 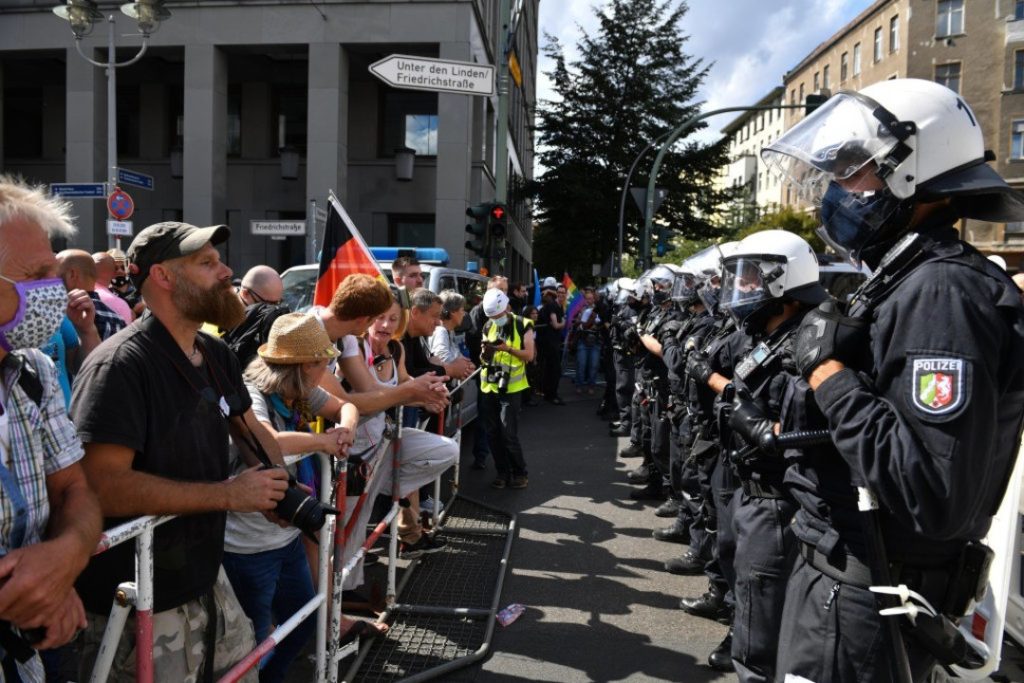 What is wrong with this picture……?

Former Kommando Spezialkräfte (KSK) lieutenant returns his 68 awards to the German government and announces that he and 650-700 more veterans will take on the protection of the hikers.

In a letter to the Federal President, the Chancellor, and the Federal Defense Minister, retired Oberleutnant Schneider announces that he will return his awards for special services. Extracts from the letter of 04.01.22 ( source ):

“When I look at what has happened in the last 20+ months, I seriously question democratic principles. Not only that you, like politicians, have undermined all fundamental rights with true deceptions, no, but you also are now massively oppressing the population.

Any of you who have ever served recognize my thoughts. They attack the entire population by means of the brutal police force, hereinafter referred to as Smurfs.

Children and young people, women, and the elderly are now being harassed by Smurfs. And this is what they call politics?

I hereby inform you that almost immediately 650-700 veterans will provide the protection and, in the worst-case scenario, intervene through the legally unenforceable emergency aid, once the Smurfs exceed the limits of reasonableness and use unnecessary physical force against fellow citizens.”

Lest you, my readers, forget the intolerable conditions prevailing in our country, I have attached here three short videos of brutal police attacks on peaceful civilians.

Police brutality against defenseless women. The victim calls for help

Germans have no choice but to overthrow their government
“The Germanic spirit is the spirit of freedom.” – Georg Wilhelm Friedrich

If you now think that the catastrophe in Germany will finally take a turn for the better, I must, unfortunately, disappoint you bitterly. Never in history has a government resigned that has harassed, blackmailed, and tyrannized its people. After the announcement of the KSK ex-lieutenant and bearer of 68 orders of bravery, let no one believe that anyone in the federal government and the leading political clique would be so impressed that they would voluntarily relinquish power and bring Germany back to normal democratic conditions.

The opposite will be the case: undetected by the public and hidden by the prostitute media, German politicians will proceed to purge the army, police, and special forces. They will do this step by step in salami technique and will retire early or simply fire members of these units who have attracted attention with even the slightest critical remarks about current government policies. The troops know this and they know that if they are to have any effect, they will have to act very quickly, very massively, and very forcefully.

But in the end, the German people have no choice but to overthrow the criminal government, and not just the federal government: all the state governments of Germany have shown themselves complicit in this greatest political crime against the German people and must also be overthrown and their deputies must be arrested and imprisoned. The same goes for the mainstream media, the government unions, and the top representatives of the two churches, who (with some exceptions) have once again shown themselves to be minions of a tyrannical system and have not said a word about the federal government’s deadly mass vaccinations. , not a word about the lethal injections in old people’s homes and not a word about the completely illegal and deeply inhumane mass vaccination of newborns.

The people now have no choice but to prove that the sovereign is not the government, but the people themselves. The year 2022 is the last chance for the Germans to reclaim their freedoms.

Incidentally, this assessment is confirmed by Robert Kennedy Jr. in his January 2 address to the American people and the peoples of the world:

Important message from Robert Kennedy, Jr. for the year 2022

“And I will tell you three things that you must not forget at this critical time.

The first is that once the government has gained power, it never relinquishes it voluntarily. And that’s just one rule as sure as gravity.

The second thing we need to know is that any power the government acquires under the pretense of this pandemic will eventually misuse it to the extreme.

The third thing to know is that no one has ever ended totalitarianism by following orders. Every time you give in, the demands get bigger and bigger. We need to find a solution here and now. This is the hill on which we will die. They target our jobs. They are after free movement.

Now they are after our children and we as parents have a duty to protect them.

Never in history has there been a government that said to its people, “We are going to ask the children to sacrifice themselves and take risks to save old people.”

With the elderly, the adults, it is always the other way around. The adults put themselves in danger to protect their children. This is an ethical question. It’s a moral issue. It is a matter of character for each of us. And it is a matter of preserving democracy and public health. We must all stand up now and do everything in our power to end these power games of authoritarian powers that are trying to rob us of the health of our children.”