Robert Gorter’s early childhood  was one of a cute and smart boy who lived his own life amidst his parents and two sisters. He made his room and bed himself (received 25 Dutch cents per week as “pocket money” for doing that, and saved it usually to buy presents for when there was a birthday or “Sinterklaas” = Saint Nicholas on December 5th).

He was always eager to learn and, on occasion, a pain in the neck for his parents and others (especially Miss van Zutphen, his first teacher at his primary school), who could not always answer his questions in a way which satisfied Robert.

(There is this anecdote that in the third grade, the somewhat corpulent teacher Miss van Zutphen, who loved to wear her hairy canary-yellow coat, showed a few pictures of the famous Dutch painter Vincent van Gogh, who never ever sold one painting of his in his life. She told about his life and how van Gogh ended as a mad man; and how one could see this when one observes his paintings at the end of his life. As an example, she would point at a painting with a farmer in the fields, crawls in the sky and both the sun and the moon both shining. “How can that be possible to have the sun and the moon in the sky at the same time? Robert put his finger high up and asked to respond. Miss van Zutphen consented and he said: “The sun and the moon are often to bee seen together in the sky like right now!” and he pointed to look through the window of the classroom where both the sun and the moon were clearly visible. The children in the classroom were shocked that indeed, there were both sun and moon clearly visible. So, here was suddenly a situation where the authority and the credibility of the teacher were clearly put to a test. Robert ended up standing in the corner with this face to the wall till the end of the morning. For Robert, the punishment was a kind of victory, as he knew he had been right; and by punishing him for opposing her statement, Miss van Zutphen had shown she was not in control of the situation as she should have been as a good teacher. By preventing a kid from saying something, only more trouble lay ahead.

This, and other experiences from Robert Gorter‘s early childhood , made him a fervent proponent of free speech and flow of information, which lead to his strong and active support of Amnesty International, and other Human Rights Organizations later in Life.)

There is a law in the Netherlands which forbids 5 year olds to go to school (1st grade). But Jansje Gorter was also smart and figured out that nothing was said about the age of a child when it would enter 2nd grade. Thus, she hired a retired teacher who taught  during all Robert Gorter’s early childhood  at home and privately reading and writing, arithmetic and geography four mornings per week. After a lunch (we are sure with plenty of Champagne) with the “burgermeester” (mayor) of the town, the burgermeester agreed that there was no reason to deny Robert at age 5 (half-way 6) from entering the 2nd grade. And so, Robert was always the smallest and by far, the youngest in his class.

Early spring was the time of the blooming bulb fields. Around and south of Haarlem, there still is a huge area where tulip-, daffodil- and hyacinth bulbs are grown. Around Easter time, these bulbs start to bloom in these fields. It is a festival of colours and scents, and millions of tourists flock to Haarlem and Lisse to see this incredible scenery. During Robert Gorter’s early childhood  he would take his bicycle and take the 8 to 10 km ride to see this. He would like to come back with a huge necklace of tulips, hyacinths and daffodils around his neck.

Robert loved to take bicycle tours through the bulb fields, and on a bike,
he could get where busses filled with tourists could never come.

In the summer time, the big event was bicycling in the “Waterleidingduinen” which is a protected natural park along a main part of the coast of the North Sea, delivering tap water to the cities of Haarlem and Amsterdam. One could bicycle there for hours and have hot chocolate in one of those small wooden cafes at the beach. 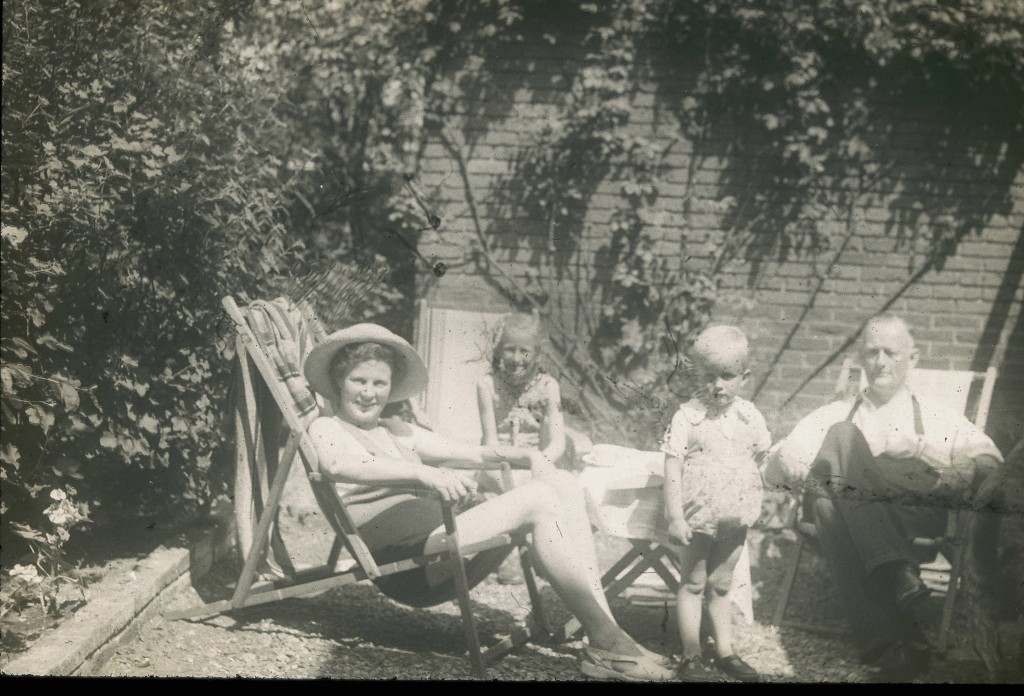 Robert Gorter at age 2 at home in Heemstede, the Netherlands, with his mother (l) and sister Ellen (second from l) and his father (r) 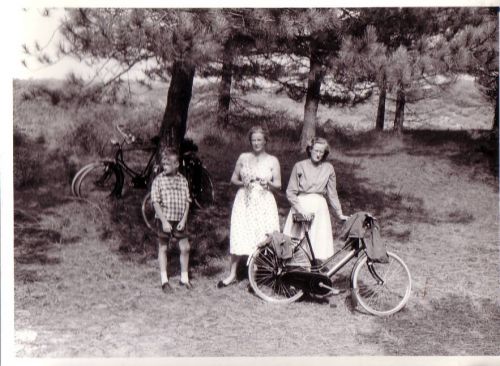 Robert with his mother and his second sister Ellen during one
of those bicycling tours along the coast of the Netherlands where Robert grew up. 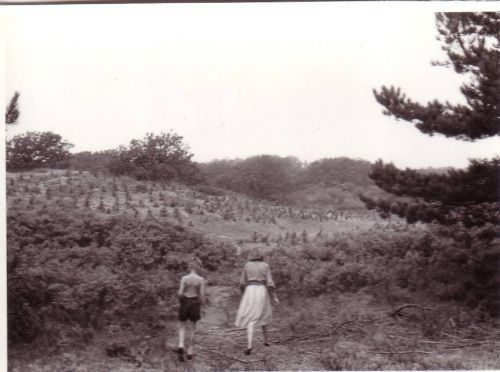 Robert and his sister Ellen walking in the Waterleidingduinen, a national park very close to where Robert grew up (Aerdenhout and Heemstede) during one of those bicycling tours on a sunny Sunday 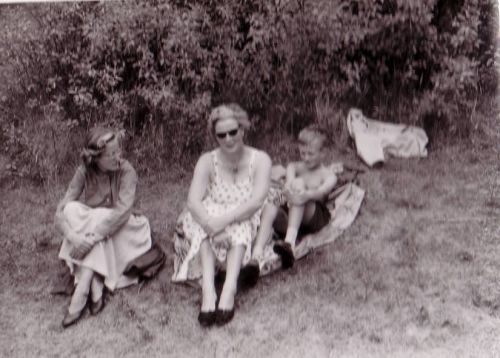 Robert with his mother and sister Ellen on a brake from bicycling in the dunes between Santpoort and Leiden. 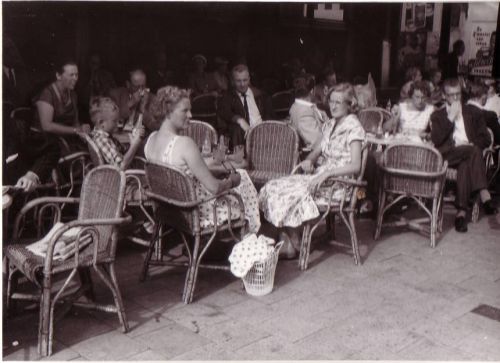 Robert and his mother and Ellen having a stiff drink at a typical out-door café at the beach in Zandvoort or Bloemendaal.Notice that Robert is studying the label on the bottle. Already as a child, he was a very nosy person who wanted to know everything and got antsy when it took to long to find out. 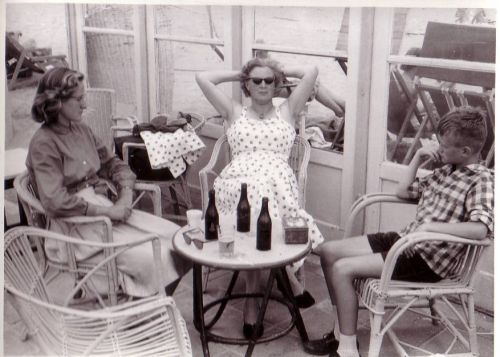 On another outing with his mother and sister Ellen. In the back the sand of the beach and on the fourth
(empty) chair was the photographer sitting (probably his father or his other sister Rita). 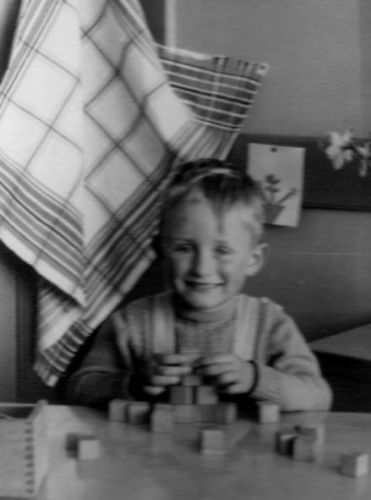 Robert in kinder garden at age 4: always doing something 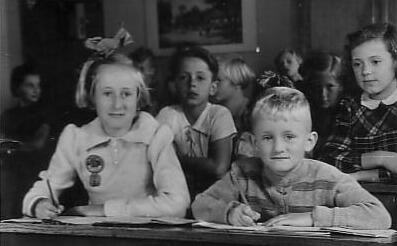 Robert at age 6 in the second grade with his sister Ellen who must have been at age 10 and a few grades
higher at the same public school, the “Craayenester School” 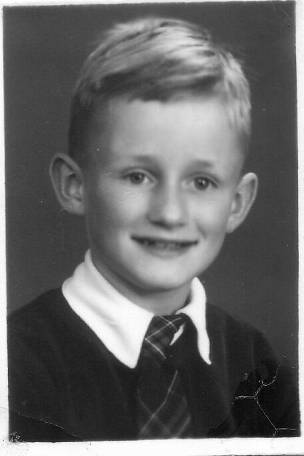 Robert also at age 6, ready to go to the second grade, and eager to learn more. He must have been a very active child (hyper active?) and several people report that he would do ten things at a time, and still finish in time. He was very nosy and asked more questions than anybody could (or felt they could) answer. He was always good humoured,and his parents never had any difficulties with him. He was “perfect” as a child. 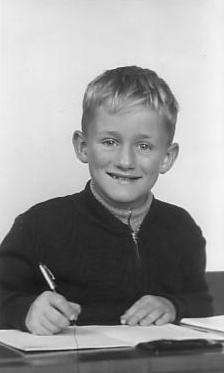 Robert (en face) at age 7 at school in the 3rd grade (the Craayenester School; a public school and since Robert was born during the Baby Boom, his class was always filled with more than 58 to 60 children). 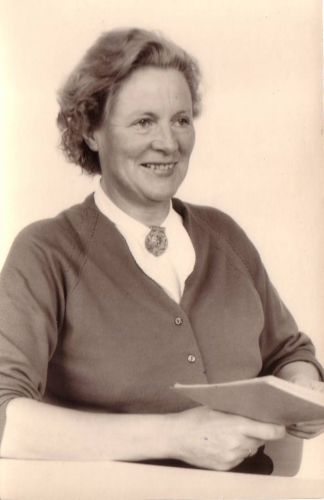 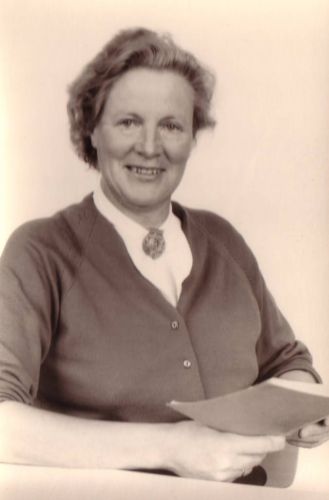 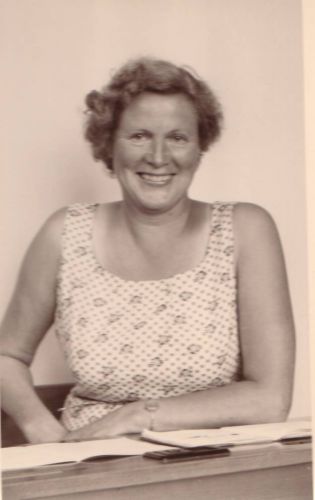 For Robert, it was very important to serve and he did as much as he could; usually already starting at that the age of four. From age six on, he served more and more anonymously and often told his mother or others that the work done in the house or garden was done by his sister Ellen.

Ellen was a somewhat  difficult child who exhibited great jealousy towards Robert at times. Also, she was less smart at school, and suffered from bed watering up till age 12. Therefore, she was unhappy and often moody, what would bring her in conflict with the parents and the siblings. In order to have his sister Ellen make a better impression on his parents, Robert would do work and “nice things” like polishing the antique silver or setting the table, work in the garden, etc. and would tell his mother or father that Ellen did it.

Sometimes, Ellen would find out that Robert did work and that he had said she did it; it never seemed to be against her consent. Robert had developed a certain compassion, a certain pity towards Ellen. 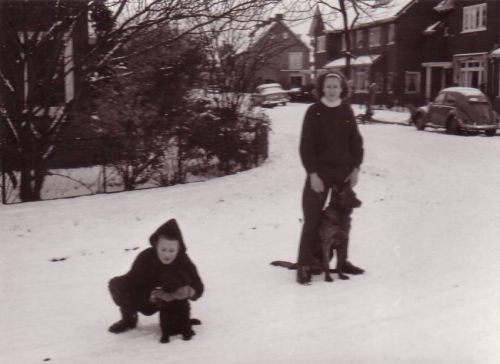 Robert in the front with a 100% black & hairy Bouvier puppy, called Melrose, and his sister Ellen standing behind him with the Dutch Shepard dog. It must have been in the winter of 1955-1956. Robert loved snow and ice and was a pretty good ice skater! 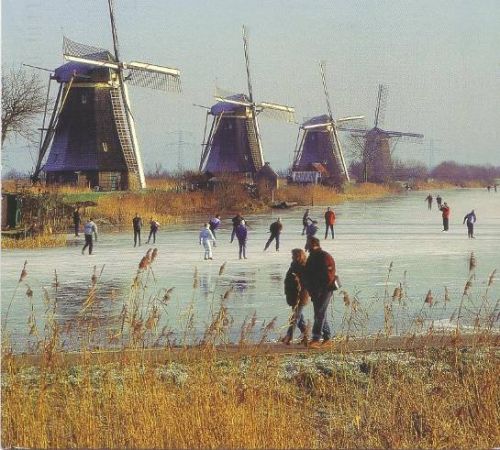 This is a picture of an area where Robert used to go ice skating as a young boy. He loved the cold and the biting winds and the absolutely quietness of a landscape covered by snow at sunrise

And very close to Haarlem this landscape which Robert loved in winter and in summer time. What he liked so much were the very open skies, which reflected for him the openness of Dutch society. Through his studies of other world conceptions as a teenager, he became more and more grateful that he was born in a society where he could develop his own characteristics 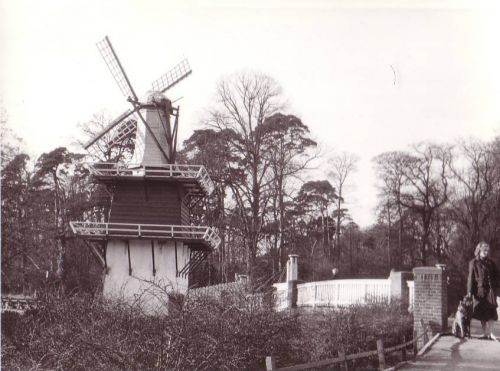 Ellen with the Dutch Shepard dog Arax in one of the parks around Heemstede and Aerdenhout (Bloemendaal). In this park, there was a “kinderboerderij” an area where deer, pigs, peacocks, ducks and sheep lived together in one large commune and where children could touch (tease?) and care for the animals. As a young boy, Robert loved to go here and feed the animals and in late summer time, collect mushrooms (cantarellen, “Pfefferlingen”). 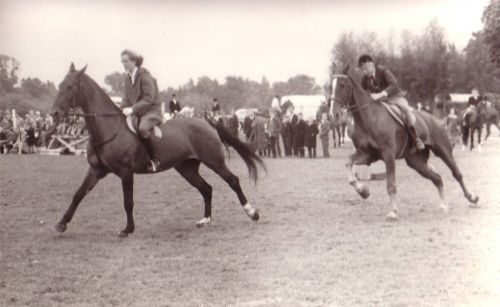 Robert’s sister Ellen around age 17 or 18, participating in a championship. Ellen loved horses and riding horseback. There was a special school, run by the family Wallage in Vogelenzang, close to Heemstede and Aerdenhout. She would hang out there daily, if she could. There was some suspicion from Robert’s side that she would do more horseback riding than her homework

During Robert Gorter’s early childhood  his sister Ellen, around age 17 or 18, was participating in a championship. Ellen loved horses and riding horseback. There was a special school, run by the family Wallage in Vogelenzang, close to Heemstede and Aerdenhout. She would hang out there daily, if she could. There was some suspicion from Robert’s side that she would do more horseback riding than her homework