Many of his friends remember Robert Gorter in highschool as a dynamic, intelligent young man. His interests regarding dating girls were non-existing. He mainly studied music (violin and viola) at the municipal music school of Haarlem; built his own mirror telescope (30 cm diameter) which could magnify up to 2.000 times and the quality of the telescope which put his father’s best friend professor Kistemaker of FOM in amazement; experimented with plants and trees and won the first price in any competition in growing bulbs and vegetables in the school garden. Also, he harvest twice per year kilos of sweet figs from one tree in Holland and Germany which are countries where the climate is too cold to grow figs at all.

Robert Gorter has “Green Thumbs” for sure, and any plant or any animal under his care would do extremely well. Later in life, this quality seemed to have helped him as a doctor to turn around the course of disease in severely ill patients (AIDS patients, end-stage cancer patients; patients living with severe and chronic pain) and bring many in complete and long-time remissions. Robert entered puberty very late (probably at age 17) and this picture shows him still at age 17 and still in a pre-pubertal state. 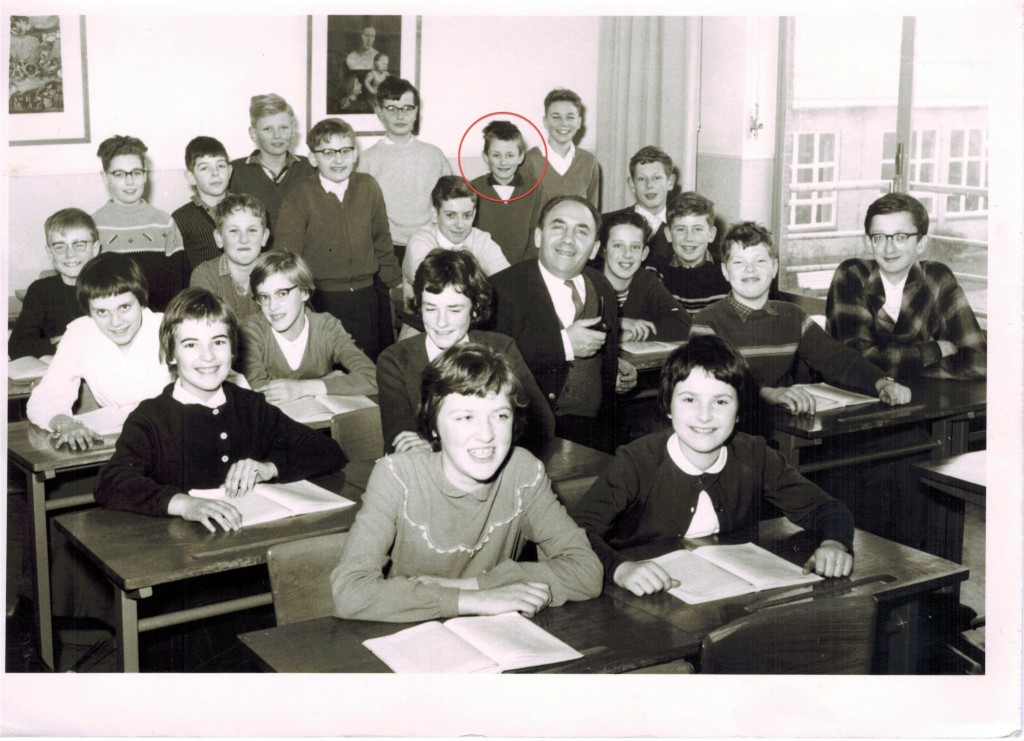 Robert Gorter all the way in the back against the wall in his class of 24 children. As one can see, Robert was the smallest and youngest of his class and he hated that. He was often teased as he was the smallest and the youngest: he was a year younger than anybody else. At that age, it is an important difference. (See picture above)

Robert Gorter is born far into the month of October and there is (was?) a law in the Netherlands that a child can enter first grade of Grammar School only if it had reached the age of six by the beginning of September. His mother was smart: she reasoned that the law says nothing about the age a child must have reached to enter Grammar School in second grade. Thus, she hired a retired grammar school teacher and this teacher taught Robert privately four mornings per week all what children would learn regularly during their first year at grammar school. At the end of the first year at Grammar School, Robert Gorter had to be scrutinized one complete week whether he had the level of any other child at the end of first grade. He passed all scrutiny with the best possible marks and was then accepted to enter second grade at age 6 early September of that year.

Thus, during the following 12 years of education at the best schools of his region, Robert Gorter was always the youngest and by far the smallest child in his class: and he did not like it but what could he do? But at the end of his 12 years education, he was one of the youngest to enter the University of Amsterdam to study Medicine and Philosophy (German: “Erkenntnistheorie”; English: “Theory of Knowledge” or “Theory of Cognition”).

That his mother could convince everybody to let her son enter Grammar School (“Grundschule”) one year earlier than required by law was one of the characteristics of her: being innovative and decisive; being persuasive  and never taking a “NO” for an answer. (remark: these characteristics seem to be genetic as Robert Gorter also never takes a “NO” for an answer and if yo.u say to him. “You will never succeed in this”, one could make sure he would put his shoulders under it and make it happen). 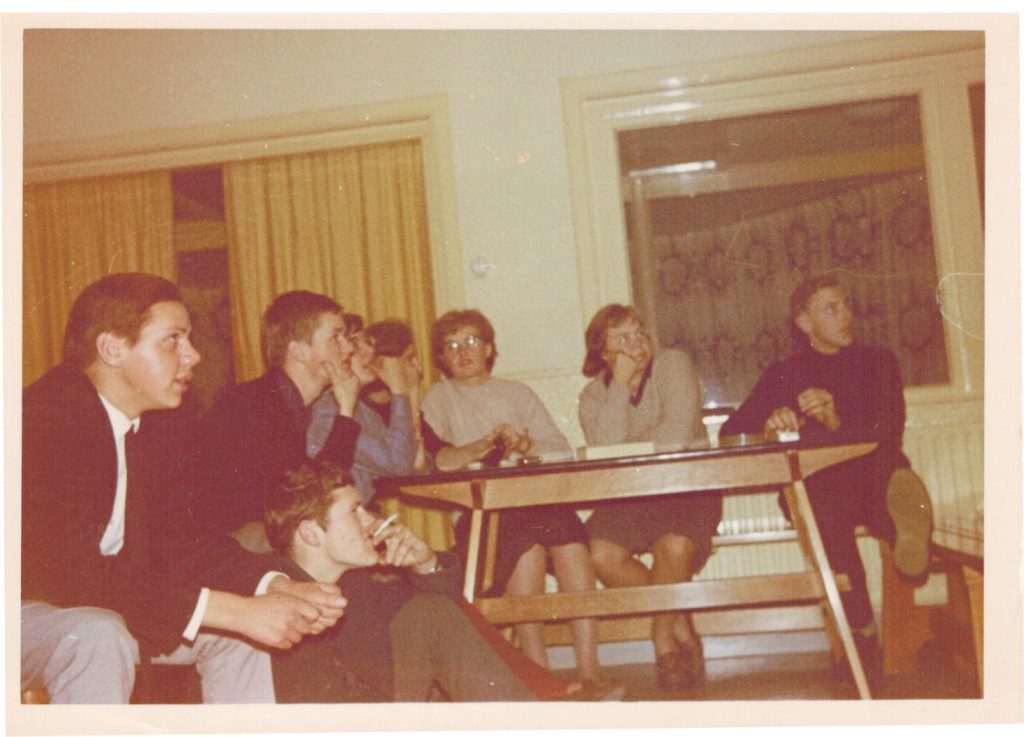 Robert Gorter (2nd from the left) with his fellow students during the last year of the Gymnasium (Coornhert Lyceum in Haarlem)  at a weekend seminar, getting ready for his final qualifying exams to enter the university. All the way to the right is Eppo van Hoorn, who entered the police force after finishing school. Robert Gorter at a long weekend with his class to intensify their knowledge on algebra and mathematics for final qualifying exams to go to University (age 17). 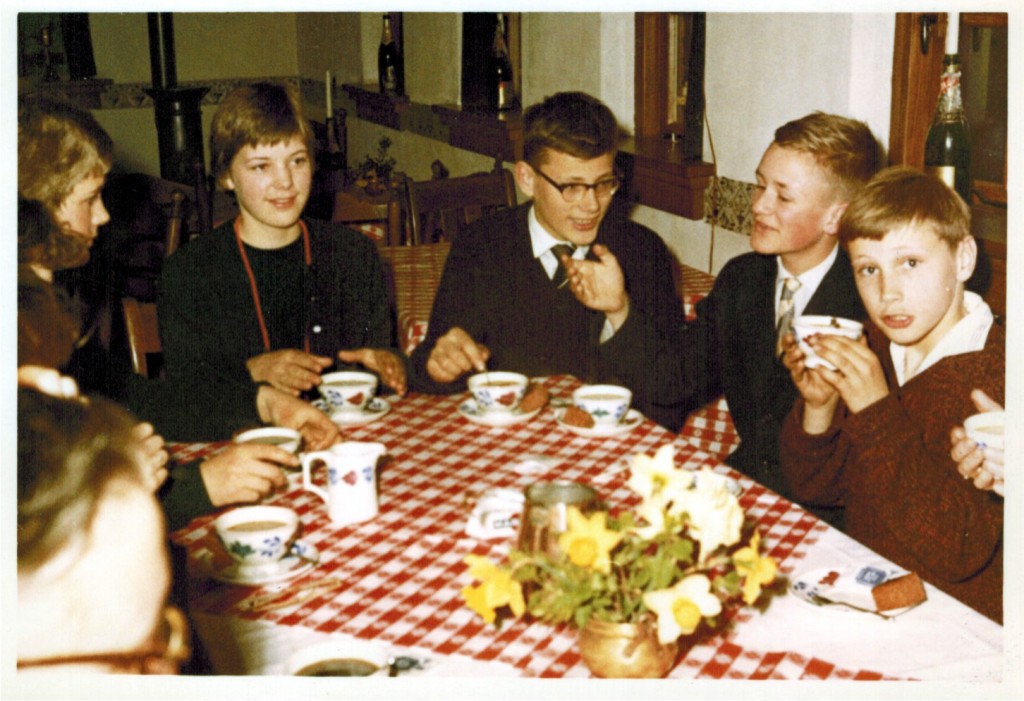 A few years on a row, Robert Gorter would visit his aunt Klazientje (father‘ side) in Enschede (Eastern part of the Netherlands) during his 4 days fall vacation in November and assist in planting bulbs (tulips, daffodils, hyacinths, etc). Here he is part of a Sunday morning brunch with locals of his age…