Beyond the need for sex, it was found that for this cohort of men, bromances performed a very similar and often superior function to romances.

The definition of bromance is a close, emotionally intense bond between two men. It is an exceptionally tight affectional, homosocial male bonding relationship exceeding that of usual friendship and is distinguished by a particularly high level of emotional intimacy and often (but not necessarily) sexual. The emergence of the concept since the beginning of the 21st century has been seen as reflecting a change in societal perception and interest in the theme, with an increasing openness of western society in the twenty-first century to reconsider gender, sexuality, and exclusivity constraints.

Several characteristics of bromance have been cited:
– Bromance conveys a male homosocial relationship that goes much further than traditional homosocial practices. The increased closeness goes beyond being mere friends, to a deep bond that has been characterized as capturing the conceptual edge of “is gay / is not gay”.

– Its emergence as a distinctive conceptual genre and theme in the movie and television industry is seen as reflective of a “broader acceptance of non-heteronormative cultural expressions as well as the prospect of a same-sex intimacy that transcends matters of sexual orientation”.

– Contemporary cultural circumstances, including the struggle for and attainment of gay marriage equality and specific elements of the depiction of bromance in movies and television separate it from buddy films, as well as historic romantic friendships, which reflect a different social construction.

\
The more matured Western societies have taken a collective interest in reexamination of some of the traditional constraints on male friendship, and in potentially reshaping the constructs of gender, sexuality, and intimacy. Bromance provides “a case study of gender, sexuality, and exclusivity constraints in twenty-first century America as they operate in law and beyond. Those constraints in turn speak to the privilege and subordination imbued in this type of relationship, with implications for other types as well.” This is distinct from the connotations of romantic friendship, a term of 20th century historical scholarship that retrospectively described close homosocial relationships, including “Boston marriages”, which had become less common after potential physical intimacy between non-sexual partners came to be regarded with anxiety in the second half of the 19th century.

On the one hand, social interest in the theme has been seen as driving the film industry, which has then fed back to society at large, exploring peoples’ mindsets and addressing acceptance of “other types of relationships” between people. On the other hand, some have seen the emphasis on platonic love as a rejection of homoeroticism, or as a deliberate confounding of homosocial and homoerotic relationships.

Bromance has also been seen as a reflection of greater “discursive expressivity”. The experiences of friendship and masculinity, perhaps due to more open parenting styles from the 1970s, reflect a trend toward more openness emotionally, with increased expressivity and creativity. According to sociologist Peter Nardi, “men are less afraid of being perceived as gay. It has become more acceptable for them to show some intimate emotion.” Men are marrying later, if at all, which impacts male bonding. According to the 2010 US Census, the average age of a man’s first marriage is 28, up from 23 in 1960; men with more education are waiting until their mid to late 30s before getting married.

The rise of the intimate ‘bromance’ could threaten the traditional heterosexual relationships, academics suggested after discovering that many men find their close male friendships more emotionally (and sexually) satisfying than relationships with women.

Intense male friendships have grown more acceptable in recent decades as attitudes towards homosexuality and bisexuality changed, meaning men no longer fear showing affection towards each other.
In some, the intimate bromance may not be the progressive expression of enlightened masculinity, as it is sometimes described and portrayed in movies, said Adam White of the University of Bedfordshire in Britain.
Rather, it may be a regressive development, with especially worrying results for women. His research, based on interviews with male undergraduate students, concluded that men saw their female romantic partners as judgmental, and as “the primary regulators of their behavior.” This led to a generalized disdain for women, and a view of romance in which men feel they are “constantly posturing and self-monitoring, not only to achieve desired heterosexual sex, but to prevent relationship destruction.”
A key theme of the bromance, on the other hand, was the freedom to express themselves without judgment and to engage in emotional intimacy without fear or inhibition.

The rise of the bromance “is very, very good for men,” Adam White said. It offers young men the opportunity for, as the research found, “elevated emotional stability, enhanced emotional disclosure, social fulfilment and better conflict resolution, compared to the emotional lives they shared with girlfriends.” 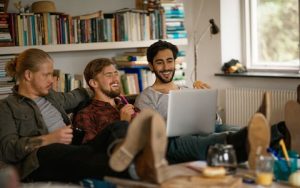 But researchers at the University of Winchester warned that bromances, coupled with the ease at which men can now engage in casual sex, are threatening long term relationships with women. Gorter expects “that possibly, women would discover bromance with girlfriends too and turn away from the stereotypical romances with men.
After surveying 30 undergraduates, they discovered that 28 would rather talk about emotional issues with their male friends than with girlfriends. The majority also said it was easier to resolve conflicts with men, and admitted they kept secrets from female partners which they shared with male friends.

Dr Stefan Robinson, of the University of Winchester, said the results were ‘significant and worrying’ for women and warned there is in emerging culture of sexism and disdain in the way Millennial men view the opposite sex.
“These heterosexual millennial men cherish their close male friends so much so that they may even provide a challenge to the orthodoxy of traditional heterosexual relationships,” said Dr Robinson.
“Given that young men are now experiencing a delayed onset of adulthood, and an extended period of adolescence, men may choose to cohabit as a functional relationship in the modern era.

“Because heterosexual sex is now achievable without the need for romantic commitment, the bromance could increasingly become recognized as a genuine lifestyle relationship, whereby two heterosexual men can live together and experience all the benefits of a traditional heterosexual relationship.”
The researchers say films such as 21 Jump Street (2012), Due Date (2010) and The 40-Year-Old Virgin (2005) have also heralded the era of the ‘Lad flick’ which has made close friendships between men normal and desirable. 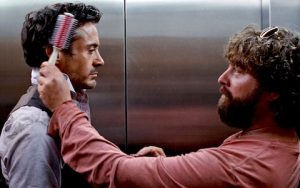 All the men involved in the study had ‘bromantic’ friends who they lived with as roommates or for a romantic (sexual) relationship, and had known each other for at least 18 months.
Of the 30 men interviewed, 29 said that they had experienced cuddling with a same sex friend, and many said they often slept in the same bed.
One man named ‘Aaron’ told researchers: “We hug when we meet, and we sleep in the same bed when we have sleepovers. Everyone knows it, and nobody is bothered by it because they do it as well.”
Another man surveyed, called ‘Martin’ said: “It’s like having a girlfriend, but then not a girlfriend. To have a male lover is better.”
When asked to describe the difference between a ‘bromance’ and a romance, one undergraduate called ‘Bob’ answered: “Sex really. Much more satisfying and at an equal level.”
Most men surveyed said they also told their male friends secrets which they felt unable to share with their girlfriends.
One participant named ‘Harvey’ said: “Well, for example, Tim knows I love listening to Taylor Swift and Beyonce, but I keep that quiet because she would judge me. I feel like I have to be (act) more manly (macho) around her.”
Dr Robinson added: “Young heterosexual men are now able to confide in each other and develop and maintain deep emotional friendships based on intimacy and the expression of once-taboo emotional sentimentality.
“There are however significant and worrying results here for women. These men perceived women to be the primary regulators of their behavior, and this caused disdain for them as a whole in some instances.
“Much in the same way that women are portrayed in contemporary cinema as objects for male gratification several of the participants spoke of women they knew in a generally negative way.”
“It was in this modern climate that the “bromance” emerged, first as a movie genre, a mix of the buddy movie and the romantic comedy. Jonah Hill, Seth Rogen, James Franco, and Michael Cera have all famously played the part.”
“The cultural acceptance and its adoption of the bromance term represent an increased recognition that young men are permitted to have more diverse and homosocial masculine identities,” the paper reads.
www.apa.org/pubs/journals/men/
time.com/4978727/bromance-male-friendships/
https://psmag.com/news/you-and-he-could-write-a-bad-bromance
https://link.springer.com/article/10.1007/s11199-017-0768-5