Reckless Twitter hashtag or serious future policy? US cops give their views on ‘defund the police’ campaign 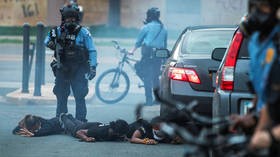 Police detain a group in Minneapolis, Minnesota, US, May 31, 2020. REUTERS/Lucas Jackson

Calls to strip law enforcement of funds should remain on social media and don’t reflect reality, a police union president told RT. A former NYPD commander countered that some funds could be reallocated and restored if needed.

Nationwide protests sparked by the death of George Floyd at the hands of Minneapolis cops last month have spawned a growing movement to defund police departments. The radical idea has already been embraced by Minneapolis City Council, which has assembled a veto-proof majority to replace traditional law enforcement with a “community-led system.” The proposal, which proponents admit will take time to fully implement, has sparked a fierce debate about how to ensure public safety in America’s cities while rooting out discrimination and corruption.

Stripping the police of funding would have serious consequences, and those who support the idea on social media are likely not the ones who will be most affected by such extreme measures, Joe Grimaldi, president of the Houston Police Officers’ Union, told us…

Defunding the police is an extremely dangerous idea. I think it makes for a popular hashtag on Twitter, and you have a lot of Hollywood elites who are jumping in on this.

Grimaldi argued that now was not the right time to cut spending on law enforcement, as crime will likely increase due to a large number of Americans now out of work. “Anti-police rhetoric” has grown in volume over the past few years and does not accurately reflect how the vast majority of officers behave, he stressed.

But with the US spending an estimated $115 billion a year on law enforcement – a figure that has almost tripled since 1977 – some have argued that money given to police could be better spent elsewhere.

A former NYPD commander explained that he felt some police departments would be able to reduce their budgets and still do their jobs effectively.

“I’m not for defunding police all the way, but I’m quite sure – especially given this pandemic and this recession that we’re in – they can find some ways to free up some of that money,” Corey Pegues said, adding that purging departments of corruption and “brutal” cops should be the “number one issue.”

For now, the prospect of reducing police budgets or abolishing departments altogether is not popular in the United States, with two-thirds of Americans opposing the idea in a recent YouGov poll. 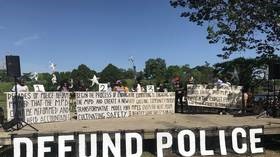 The majority of members on Minneapolis City Council have announced that they are ready to commit themselves to get rid of the city’s police department. The idea has become one of the rally cries of the ongoing protests. 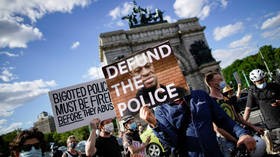 Council President Lisa Bender broke the news during a rally in Minneapolis on Sunday, saying that nine of the body’s 13 members have so far got on board with the idea.

With calls mounting for US police forces to be disbanded, one law enforcement abolitionist has confirmed the right’s worst fears: once the fuzz is gone, nobody’s coming to save you, and you’ll deserve everything you get, whitey.

If ever there was an image that exemplified the worst excesses of American police brutality, it was that of Minneapolis police officer Derek Chauvin choking the life out of George Floyd over nearly nine agonizing minutes last month. As rioters burned, looted, and murdered in the aftermath of Floyd’s death, the American left demanded not just reform, but the defunding or abolition of police departments.

In general, in the US, society is more violent than in Europe, Australia, or Canada. In Holland and Scandinavia for instance, policemen roam around in inner cities on a bicycle and are available at the spot. In Holland, Oom Agent (uncle policeman) was your best friend… and there was never violence in the streets and for sure, not against policemen and policewomen. But with recent demographic changes in Europe, that attitude towards the police and local is changing.