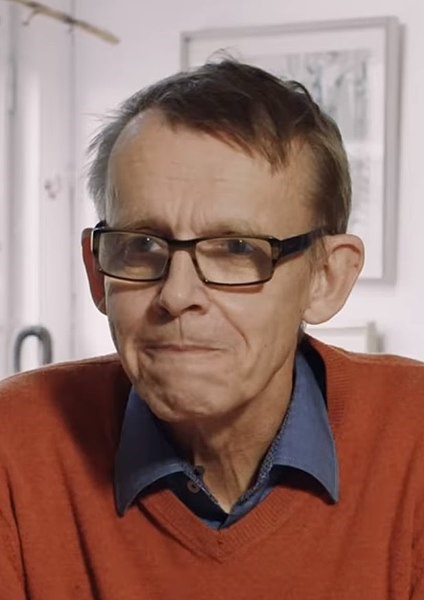 Hans Rosling (1948-2017) was a Swedish physician, academic, and public speaker. He was a professor of international health at Karolinska Institute and was the co-founder and chairman of the Gapminder Foundation, which developed the Trendalyzer software system. His posthumously published book Factfulness, coauthored with Anna Rosling Rönnlund and Ola Rosling, became an international bestseller

Over the course of this pandemic we have often wished that Hans Rosling was still alive. For those who are unaware, he was a medical doctor and a professor at Karolinska Institutet who had a particular interest in global health and development. In 2012, Time magazine declared him one of the 100 most influential people in the world.

During the last few months of his life, in 2017, he wrote an excellent book called “Factfulness“ that summed up most of his thinking, and described how many of the things people “know” about the world are completely wrong. Hans Rosling is something of a hero of us, and if he was still alive, I’m sure he would have contributed to bringing some sanity to the current situation. With his global influence, I think people would have listened.

Two of Hans Rosling’s former colleagues at Karolinska Instituet, professor Anna-Mia Ekström and professor Stefan Swartling Peterson, have gone through the data from UNICEF and UNAIDs, and come to the conclusion that least as many people have died as a result of the restrictions to fight COVID-19 as have died of COVID-19 directly.

These unintended (?) consequences of the efforts to fight COVID-19 have caused the rate of childhood deaths to increase significantly in 2020 for the first time in decades. The two professors also note that rates of childhood marriage and of teen pregnancy and abortion have increased significantly as a result of taking children out of school. They have been interviewed about their findings on SVT, the Swedish public broadcaster.

“We are very impressed with SVT for producing this documentary and daring to put a lot of the numbers in perspective. The documentary clearly shows that covid-19 is nowhere near as deadly as the 1918 Spanish flu, and is in fact very much in line with the flu pandemics of 1957 and 1968. And they note that more people died of smoking last year than of COVID-19. Or, more people died from alcohol use / abuse. But we haven’t made smoking or alcohol illegal. And they also note that anti-democratic governments in many countries have taken advantage of the pandemic to move forward their positions, get rid of opposition, and limit human rights.

Lockdowns are inherently racist and elitist, with unclear benefits but proven harms. We all need to stand up and tell our governments that we don’t support what they are doing, and we will not vote for any politician or party promoting continued lockdowns and restrictions as a solution to covid-19, unless they can clearly show that that benefit to society as a whole is greater than the harm.

There are major internationally-organized endeavors on their ways to bring those responsible for the lockdowns and the global vaccinations with mRNA containing injections, accountable in national tribunals. Normally, to get good documentation about safety and efficacy of a new vaccine takes 4 to 6 years in a population of ca. 44.000 study participants.

All we have are press releases by the drug companies over 2-4 months’ time periods and no peer-reviewed data.