To the billions of dollars they received officially, American Universities failed to report $6.5 billion in foreign gifts and contracts, an investigation by the Department of Education found. 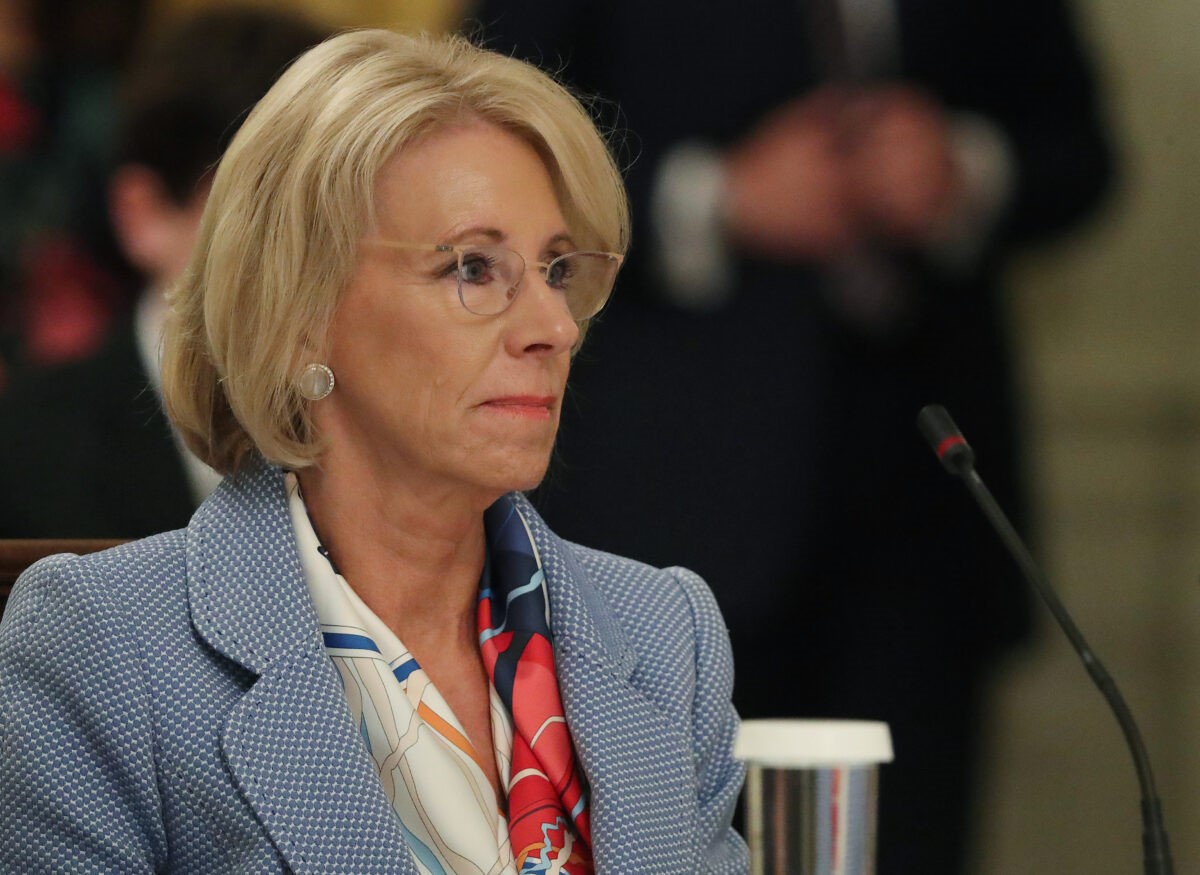 Federal law requires schools to disclose substantial foreign gifts and contracts to the Department of Education (DOE) twice a year. Many have for years failed to do so, while others severely underreported the income. The deluge of the financial disclosures poured in as the department opened investigations into 12 elite universities.

Universities reported receiving a total of more than $19.6 billion in foreign gifts and contracts from 2014 to 2020, including nearly $1.5 billion from China, almost $3.1 billion from Qatar, and more than $1.1 billion from Saudi Arabia, according to historical DOE data and most recent figures posted on its new online reporting portal.

Carnegie Mellon University reported receiving almost $1.61 billion in foreign gifts and contracts, the most of any university. Harvard tops the list in terms of total funds received from China, reporting nearly $116 million.

Education Secretary Betsy DeVos unveiled the findings of the investigation at an event on Oct. 20, alongside officials from the Justice Department and the State Department.

“The threat is real, so we took action to make sure the public is afforded the transparency the law requires,” DeVos said. “We found pervasive noncompliance by higher-ed institutions and significant foreign entanglement with America’s colleges and universities.”

The vast majority of the foreign funds went to America’s largest and most prestigious universities, which have received billions of dollars through a bevy of intermediaries, according to a report released by the DOE on Oct. 20 All of the institutions involved are in the meantime dependent on tens of billions of U.S. taxpayer subsidies while operating largely “divorced from any sense of obligation to our taxpayers or concern for our American national interests, security, or values,” the DOE report states.

Universities have long been on notice that a substantial amount of foreign money is coming from sources hostile to the United States seeking “to project soft power, steal sensitive and proprietary research, and spread propaganda,” the report states.

Section 117 of the Higher Education Act mandates the reporting of foreign gifts or contracts exceeding $250,000 by universities. The act empowers the DOE to refer compliance failures to the Department of Justice, which can then carry out an enforcement action to obtain the records and recover the cost of compliance.

“Institutions manage to track every cent owed and paid by their students; there is no doubt they can—and indeed do—track funds coming from foreign sources, including those adversarial to American interests,” the report states. “Nevertheless, our investigations confirm a Senate subcommittee’s finding that Section 117 reporting is systemically underinclusive and inaccurate.”

The department called the failures to report foreign funding “extremely troubling.” Yale University failed to report any foreign gifts and contracts for four years, and Case Western Reserve University for 12 years, “precisely when both were rapidly expanding their foreign operations and relationships—including with China and Iran.” Yale failed to report $375 million in foreign gifts and contracts, according to the report.

In addition to underreporting, some universities have been anonymizing gifts from foreign sources, including more than $1.14 billion in unidentified gifts from China, Saudi Arabia, Qatar, and Russia since 2012.

“American higher education is a critical human and technological strategic resource,” the report states. “The intellectual dynamism created by our nation’s historic commitment to academic freedom, free inquiry, and free speech on campus has substantially contributed to America’s economic and national security.”

“Accordingly, for decades, foreign state and non-state actors have devoted significant resources to influence or control teaching and research, to the theft of intellectual property or even espionage, and to the use of American campuses as centers for propaganda operations and other projections of soft power.”

The vast majority of the foreign gifts and contracts flow to a select group of the biggest and most influential schools, which either severely underreport or fail entirely to disclose the funds. Universities have self-reported $6.6 billion in funds from Qatar, China, Saudi Arabia, United Arab Emirates, and the DOE estimates the true total to be far greater, based on congressional and executive branch probes. A 2019 Senate investigation found the industry’s foreign funding sources to be a “black hole.” 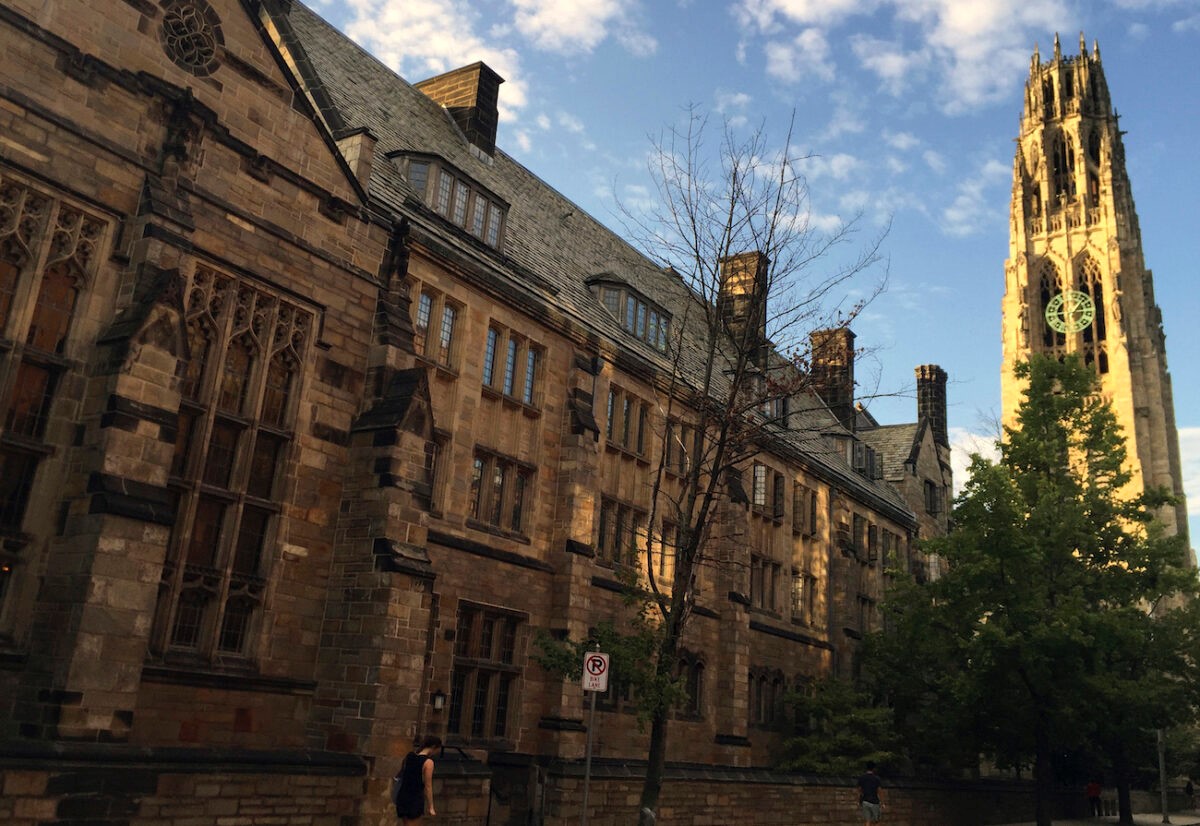 The report stresses that foreign funding disclosures are crucial since hostile governments are actively targeting the U.S. higher education sector to pilfer intellectual property and research, influence curricula, and recruit talent. The report cited several recent indictments to illustrate the problem, including charges brought against the chair of Harvard University’s chemistry department and a visiting Stanford University researcher who lied about her active status with the military forces of the Chinese Communist Party (CCP).

Stanford has reported $64 million in unidentified, anonymous gifts from and contracts with China since May 2010. Notably, the university stopped reporting detailed information on foreign gifts and contracts two months before it opened the Stanford Center at Peking University in China. The department’s notice of investigation (pdf) suggested that the university’s ties to the CCP are illustrated by a banner on the center’s website, which shows Stanford students standing before a monument of railroad tracks that helped Chinese troops enter North Korea to attack United Nations forces defending South Korea.

“As you know, Communist Chinese troops attacked United Nations forces defending non-Communist South Korea from unprovoked North Korean aggression. North Korea was then, and remains today, a brutal communist totalitarian dictatorship,” the letter, signed by principal deputy general counsel Reed Rubinstein, states. “According to the U.S. Department of Veterans Affairs, 54,246 U.S. service members gave their lives to defend South Korean [sic] from the North Koreans and the Communist Chinese between 1950-53,3 making this a particularly bizarre (and extremely indecorous) image for Stanford to highlight.” 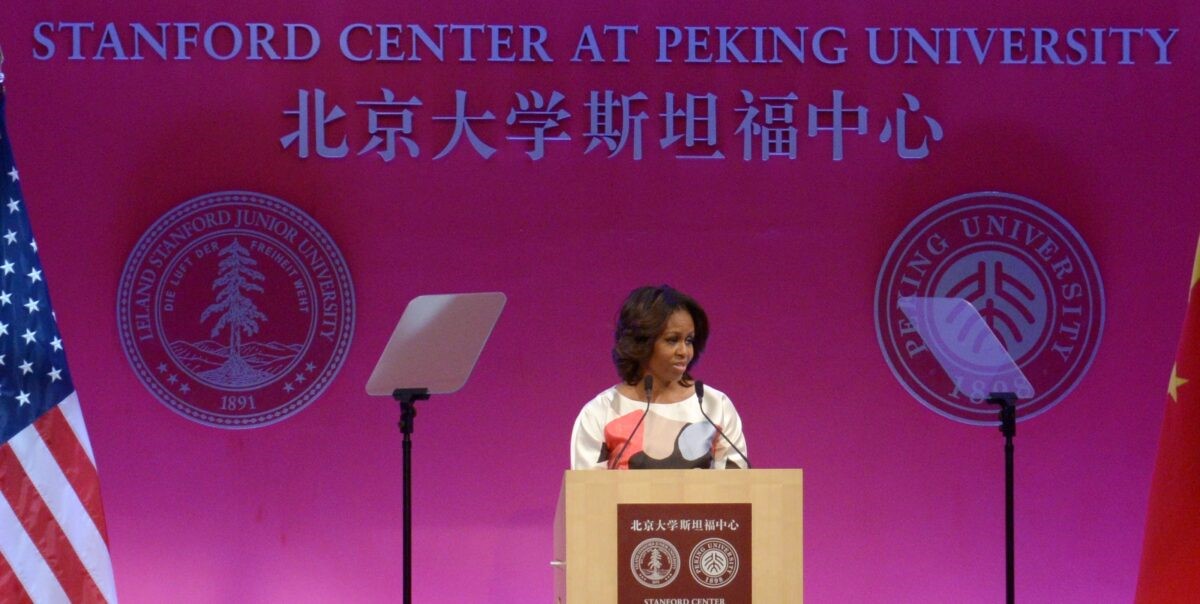 First Lady Michelle Obama delivers a speech at the Stanford Center at Peking University in Beijing on March 22, 2014. (Wang Zhao/AFP via Getty Images)

The DOE report arrives at a time when the administration of President Donald Trump is taking an aggressive stance against the influence of the CCP in the United States. The Department of Justice’s China Initiative is conducting thousands of investigations across every state. Some of the initiative’s prominent cases have involved the CCP’s influence operations on U.S. campuses. The DOJ has brought 20 cases concerning “economic espionage, trade secret theft, and research control since 2018,” according to the report.

In November 2019, the DOE informed Congress that its investigations determined that six schools have failed to report $1.3 billion in foreign funds, including one university that was “was pressured by a foreign government to hide its donations,” another that “held an agreement with a foreign government to promulgate foreign propaganda,” and others that “held direct agreements with the Chinese Communist Party.”

A major prong of the CCP’s influence campaign at U.S. universities is the Confucius Institute, which has been flagged as a political instrument of the CCP by the U.S. Senate Permanent Subcommittee on Investigations. The committee found that the CCP has invested $158 million in Confucius Institutes on campuses at U.S. universities. Despite the many red flags raised about these institutes, nearly 70 percent of the schools failed to report the related gifts and contracts with the CCP, the committee found. 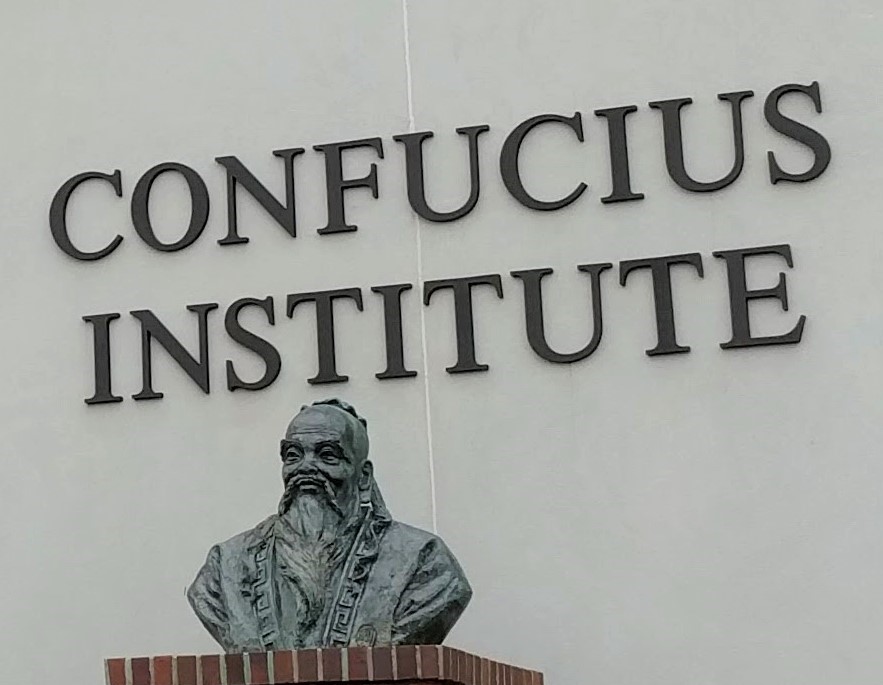 The committee found that the DOE previously failed to conduct regular oversight of compliance with required foreign gift reporting by universities and failed to update U.S. school reporting requirements. The DOE’s ongoing investigations and report address the committee’s findings.

The department created an online reporting portal that schools were mandated to use beginning July 31. The portal resulted in a “significant increase in compliance with reporting obligations,” according to the DOE.

It isn’t illegal for universities to accept foreign gifts and contracts, but the schools are required to report the transactions.

The DOE drew particular attention to funding from the CCP and Chinese corporations, including CCP-tied telecommunications giant Huawei. Nearly every institution under investigation received funds from Huawei, which has been flagged by U.S. authorities as a national security risk. The company received $75 billion in government grants, suggesting that the CCP can wield it as a tool of influence.

U.S. universities received more than $19.5 million in gifts and contracts from Huawei and affiliated entities, according to the report. Cornell University took in more than $6 million from the Chinese firm, according to data from the Foreign Gifts and Contracts Report. An unnamed school has held $11 million in contracts and agreements with Huawei since 2013, including donations for specific research projects, according to the report. Huawei’s gifts and contracts strategically target sensitive topics and competitive industries, including nuclear science, robotics, semiconductors, and online cloud services.

Some schools accepted money directly from the CCP. One school has been under contract with the CCP’s Central Committee since 2006. Another school has an ongoing academic exchange program with the Party School of the Central Committee of the Communist Party of China, which trains officials who are joining or are already within the ranks of the CCP. A third school entered into an agreement with the State Administration for Religious Affairs of the People’s Republic of China, which tightly regulates religious expression. 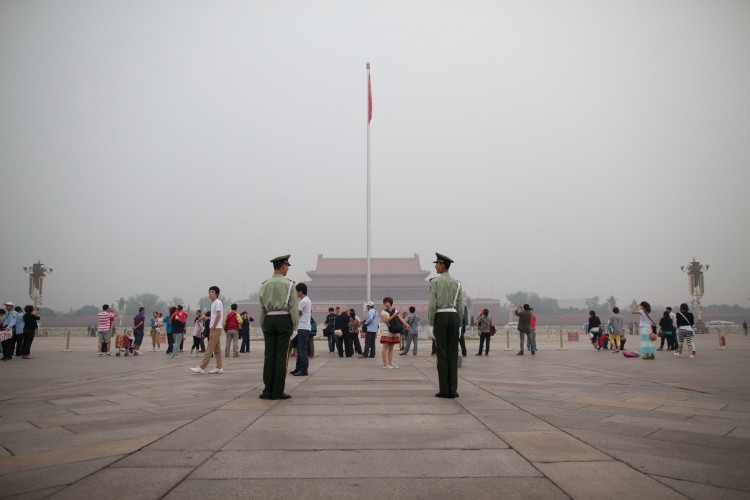 Meanwhile, Chinese conglomerate HNA Corporation offered $15 million in “talent” scholarships to an unnamed U.S. university, likely Cornell. While the HNA program isn’t the same as the CCP’s Thousand Talents Plan, it was created for a similar purpose. HNA was founded by a Chinese Communist Party official. In 2018, the firm’s chairman, Chen Feng, said HNA would “consciously safeguard the Communist Party’s central authority with General Secretary Xi Jinping as the core” and “unswervingly follow the party.” The name of the school that works with HNA is blacked out from the report, but the DOE gifts and contracts report shows Cornell accepting $2.5 million via two gifts from “HNA Group” in 2016 and 2017.