From Wikipedia and edited by Robert Gorter, MD, PhD.

A small proportion of humans show partial or apparently complete inborn resistance to HIV, the virus that causes AIDS.[1] The main mechanism is a mutation of the gene encoding CCR5, which acts as a co-receptor for HIV. It is estimated that the proportion of people with some form of resistance to HIV is approximately 10%.[2]

In 1994, Stephen Crohn became the first person discovered to be completely resistant to HIV in all tests performed despite having partners infected by the virus.[3] Crohn’s resistance was a result of the absence of a receptor, which prevents HIV from infecting CD4 present on the exterior of the white blood cells. The absence of such receptors, or rather the shortening of them to the point of being inoperable, is known as the delta 32 mutations.[4] This mutation is linked to groups of people that have been exposed to HIV but remain uninfected such as some offspring of HIV-positive mothers, health officials, and sex workers.[5]

In early 2000, researchers discovered a small group of sex workers in Nairobi, Kenya, who were estimated to have sexual contact with 60 to 70 HIV-positive clients a year without signs of infection.[6] These sex workers were not found to have the delta mutation leading scientists to believe other factors could create a genetic resistance to HIV.[5] Researchers from the Public Health Agency of Canada have identified 15 proteins unique to those virus-free sex workers.[7] Later, however, some sex workers were discovered to have contracted the virus, leading the Oxford University researcher Sarah Rowland-Jones to believe continual exposure is a requirement for maintaining immunity.[8]

C-C chemokine receptor type 5, also known as CCR5 or CD195, is a protein on the surface of white blood cells that are involved in the immune system as it acts as a receptor for chemokines. This is the process by which T cells are attracted to specific tissue and organ targets. Many strains of HIV use CCR5 as a co-receptor to enter and infect host cells. A few individuals carry a mutation known as CCR5-Δ32 in the CCR5 gene, protecting them against these strains of HIV.[citation needed]

In humans, the CCR5 gene that encodes the CCR5 protein is located on the short (p) arm at position 21 on chromosome 3. A cohort study, from June 1981 to October 2016, looked into the correlation between the delta 32 deletions and HIV resistance and found that homozygous carriers of the delta 32 mutations are resistant to M-tropic strains of HIV-1 infection.[9] Certain populations have inherited the Delta 32 mutation resulting in the genetic deletion of a portion of the CCR5 gene.[10]

In 2019, it was discovered that the mutation of TNPO3 that is the cause of type 1F limb-girdle muscular dystrophy (LGMD1F), also causes innate resistance to HIV-1.[11] The gene TNP03 was known to be involved in virus transportation into the infected cells. Blood samples from a family affected by LGMD1F showed resistance to HIV infection. While the CCR5Δ32 deletion blocks the entry of virus strains that use the CCR5 receptor, the TNPO3 mutation causing LGMD1F blocks the CXCR4 receptor, making it effective on different HIV-1 strains, due to HIV tropism.[citation needed]

Cytotoxic T-lymphocytes (CTLs) provide a protective reaction against HIV when consistent exposure to the virus is present. Sex workers are found to have these CTLs within genital mucus, preventing the spread of HIV within the heterosexual transmission. While creating a protective seal, CTLs become ineffective when lapses in HIV exposure occur, which leads to the possibility of CTLs only being an indicator of other genetic resistances towards HIV, such as immunoglobulin A responses within vaginal fluids.[5][12]

Chimpanzees in African countries have been found to develop AIDS at a slower rate than humans. This resistance is not due to the primate’s ability to control the virus in a manner that is substantially more effective than humans, but rather because of the lack of tissues created within the body that typically progress HIV to AIDS. The chimpanzees also lack CD4 T cells and immune activation that is required for the spread of HIV.[12]

While antiretroviral therapy (ART) has slowed the progression of HIV among patients, gene therapy through stem cell research gave resistance to HIV. One method of genetic modification is through the manipulation of hematopoietic stem cells, which replace HIV genes with engineered particles that attach to chromosomes. Peptides are formed that prevent HIV from fusing to the host cells and therefore stop the infection from spreading. Another method used by the Kiem lab was the release of zinc finger nuclease (ZFN), which identifies specific sections of DNA to cause a break in the double helix. These ZFNs were used to target CCR5 in order to delete the protein, halting the course of the infection.[13]

Alternatively to gene therapy, medication such as maraviroc (MVC) is being used to bind with CCR5 particles, blocking the entry of HIV into the cell. While not effective with all types, MVC has been proven to decrease the spread of HIV through monotherapy as well as combination therapy with ARTs. MVC is the only CCR5 binding drug approved for use by the Food and Drug Administration, the European Commission, and Health Canada.[14]

HIV resistance as an environmental factor

While the delta mutation has been observed to prevent HIV in specific populations, it has shown little to no effect between healthy individuals and those who are infected with HIV among Iranian populations. This is attributed to individuals being heterozygous for the mutation, which prevents the delta mutation from effectively prohibiting HIV from entering immune cells.[15]

Dr. Gorter: The Black Death was the second greatest natural disaster to strike Europe during the Late Middle Ages (the first one being the Great Famine of 1315–1317) and is estimated to have killed 30 percent to 60 percent of the total European population.

The Black Death (also known as the Pestilence, the Great Mortality, or the Plague[) was a bubonic plague pandemic occurring in Afro-Eurasia from 1346 to 1353. It is the most fatal pandemic recorded in human history, causing the death of 75–200 million people in Eurasia and North Africa, peaking in Europe from 1347 to 1351. Bubonic plague is caused by the bacterium Yersinia pestis spread by fleas, but it can also take a secondary form where it is spread person-to-person contact via aerosols causing septicaemic or pneumonic plagues.

The Black Death was the beginning of the second plague pandemic. The plague created religious, social, and economic upheavals, with profound effects on the course of European history.

The origin of the Black Death is disputed. The pandemic originated either in Central Asia or East Asia but its first definitive appearance was in Crimea in 1347. From Crimea, it was most likely carried by fleas living on the black rats that traveled on Genoese ships, spreading through the Mediterranean Basin and reaching Africa, Western Asia, and the rest of Europe via Constantinople, Sicily, and the Italian Peninsula. There is evidence that once it came ashore, the Black Death mainly spread person-to-person as pneumonic plague, thus explaining the quick inland spread of the epidemic, which was faster than would be expected if the primary vector was rat fleas causing bubonic plague. 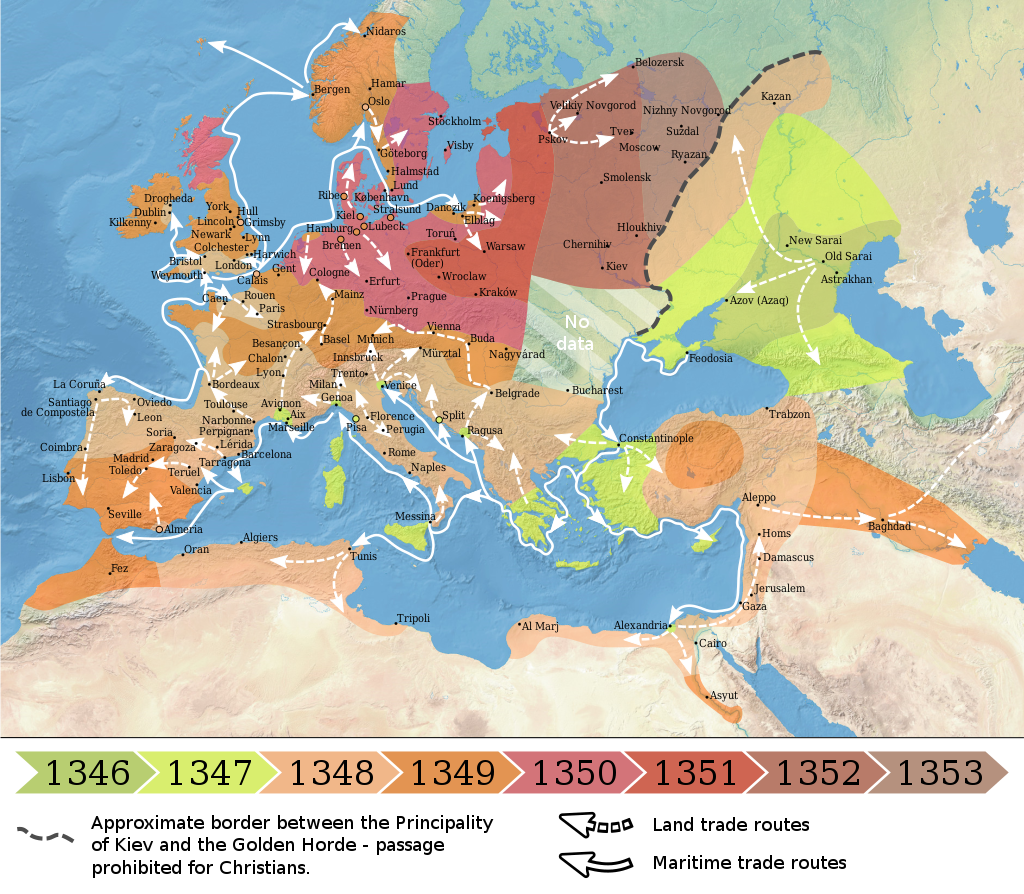 The Black Death was the second great natural disaster to strike Europe during the Late Middle Ages (the first one being the Great Famine of 1315–1317) and is estimated to have killed 30% to 60% of the total European population. The plague might have reduced the world population from c.  475 million to 350–375 million in the 14th century. There were further outbreaks throughout the Late Middle Ages and, with other contributing factors (the Crisis of the Late Middle Ages), the European population did not regain its level from 1300 until 1500. Outbreaks of the plague recurred around the world until the early 19th century.