Official figures provided by 28 European countries confirm there have been tens of thousands more excess deaths in 2022 across Europe than in 2020 at the height of the Covid-19 pandemic, as well as in 2021 when a huge swathe of deaths occurred following the emergency use authorization of the Covid-19 injections.

The continent has also suffered 193,000 extra excess deaths than was normally recorded prior to the alleged emergence of Covid-19.

Unfortunately, analysis shows that the increase in 2022 is due to so many children and young adults now dying on a weekly basis. 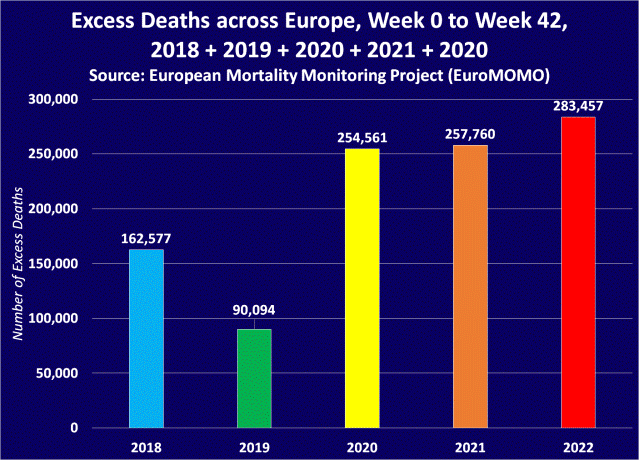 EuroMOMO is a European mortality monitoring activity. The organization states that its aim is to “detect and measure excess deaths related to seasonal influenza, pandemics, and other public health threats”.

Official national mortality statistics are provided weekly from the 29 European countries or subnational regions in the EuroMOMO collaborative network, supported by the European Centre for Disease Prevention and Control (ECDC) and the World Health Organization (WHO), and hosted by Statens Serum Institut, in Denmark.

The Expose and I analyzed data provided by EuroMOMO at the end of August 2022 and discovered an 8x increase in excess deaths among children aged 0 to 14 since the European Medicines Agency approved the Covid-19 injection for children. 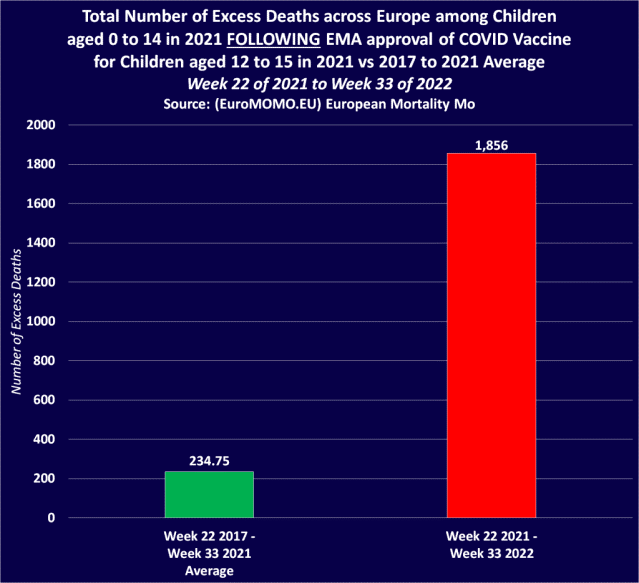 Three weeks on from our investigation we discovered that it had forced the European Union to launch a Europe-wide investigation of its won into why so many children have died since the middle of 2021 and why they are still dying.

However, upon officially announcing this investigation, the team here at The Expose noticed that EuroMOMO had altered all of its excess deaths data for the past five years. This has artificially lowered the number of excess deaths recorded in 2022 significantly.

We were able to prove this thanks to the Internet Archive (WayBackMachine).

The following example is a snapshot of the cumulative excess deaths among children aged 0 to 14 in 2020, 2021, and 2022. This was taken from the week 33 EuroMOMO report which can now only be viewed here:

But here are the official figures provided by EuroMOMO from week 36 onwards for the same age group after they officially announced a Europe-wide investigation was being launched into excess deaths among children:

How have they done this? By altering the baseline against which the excess deaths are recorded. Thus; manipulation on purpose…

By doing this they have been able to artificially lessen the severity of the situation The Expose exclusively uncovered in respect of excess deaths among children.

However, what EuroMOMO has not been able to do by curiously altering its figures after announcing an official investigation, is hide the fact that there have been more excess deaths across Europe in 2022 so far than there were during the same time period in both 2020 and 2021.

The most recent data published by EuroMOMO covers up to week 42 of 2022:

This means Europe has suffered 120,880 more excess deaths in 2022 so far than it did during the same time frame in 2018. But even that statistic may not reveal the true severity of the situation, because 2018 was a bad year for deaths due to an alleged severe 2017/2018 winter flu season.

But what’s more concerning is the fact deaths are higher in 2022 than they were at the height of the alleged Covid-19 pandemic.

During the same time frame in 2021, there were 257,760 excess deaths. A large amount of these will have been labeled as Covid-19 in the winter of 2021, but the Covid-19 injections should have put a stop to both alleged Covid-19 deaths and a huge increase in excess deaths.

Unfortunately, it didn’t, and there is plenty of evidence out there to suggest it is the Covid-19 injections that are now contributing to the significant number of excess deaths still occurring week on week. 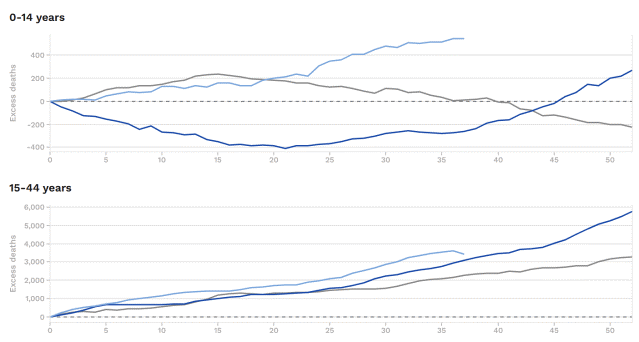 Europe has now officially recorded 28,896 more excess deaths in 2022 than it recorded in 2020 at the height of the pandemic.

The question is why?

Only the authorities across Europe can truly answer that because they hold all of the data.