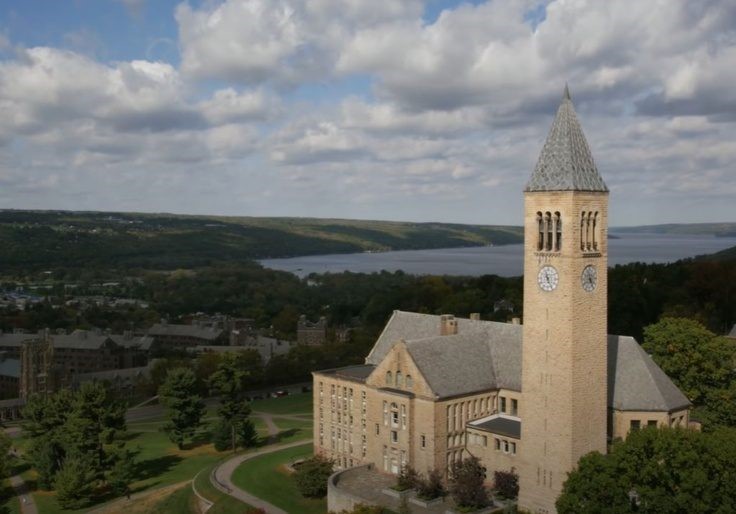 Currently, all universities and colleges in the United States, Canada and Europe suffer from a significant drop in their number of students. Although most faculty members lecture online, it is still very different than to have a face-to-face contact in a real classroom-setting at the campus. This trend will continue in 2021; due to the uncertainties around the lockdown and vaccination requirements; and the financial consequences for potential students who can less well afford tuition and living expenses at campus.

The temptation to accept bankrolled collaboration is very tempting and also this article describes how Cornell University was tempted by tons of money by the Chinese government (read the Chinese Communist Party) to overlook its own core values: Human Rights.

A joint-degree program bankrolled by the Chinese government is causing uproar among Cornell University professors, prompting soul searching at the Ivy League institution about the extent to which American academics should cooperate with the oppressive regime.

At issue is a program introduced at a faculty meeting in early February, when Professor Alex Susskind, an associate dean at Cornell’s school of hotel administration, touted a joint degree program funded by the Chinese Ministry of Education that he said would generate up to $1 million in annual profits for the university, according to meeting minutes and audio obtained by the Washington Free Beacon.

Susskind’s introduction elicited blowback from his colleagues, who expressed deep concerns about whether Cornell could maintain its academic independence given the Chinese government’s increasing control over all aspects of civil society. The faculty senate postponed a vote to endorse the venture as a result.

“When I talk to my colleagues at Peking University, there’s a dean and then there’s a political officer,” Ken Birman, a professor of computer science, told Susskind. “I’m wondering how we maintain Cornell’s independence and freedom of bias and our standards?”

Susskind said he understands the concerns but doesn’t consider them “overwhelmingly significant.”

The pushback prompted the intervention of a top Cornell administrator, who participated in a subsequent faculty meeting on Feb. 24th2021. There, university provost Michael Kotlikoff issued a warning to faculty members who had raised objections: Stop meddling. “The proper role of the faculty senate is really to set general principles,” Kotlikoff said, urging faculty members “not [to] hold individual programs hostage to individual concerns.”

The joint degree program with Peking University seeks to expand Cornell’s footprint in China by catering to mid-level Chinese executives, offering them an American education under the tutelage of Cornell professors. The faculty pushback was prompted, in part, by the fact that the motivation for the program seemed purely financial: Susskind—who repeated the term “profitable” four times within one minute during his February 10th 2021 presentation—appeared to be discounting Chinese human rights concerns in the face of the enormous economic opportunity.

China has long been a cash cow for the Ivy League university, which raised $27 million from Chinese donors between 2014 and 2019, federal records show. But now, the dual degree program is at the center of a university-wide reckoning about Cornell’s close ties to China in the wake of the country’s genocide of Uighur Muslims and other human rights abuses.

“If we were running a joint degree program with a Nazi university, then we would have said, ‘Well, we shouldn’t be doing that, because they’re committing genocide,'” Professor Eli Friedman, who studies Chinese labor issues, said at a March 10 faculty meeting.

Susskind responded to the criticism by conceding that “there are issues and problems in that part of the world,” but that tourism and hospitality are some of the largest sectors of the Chinese economy. “Because we dominate the hospitality industry education,” he said of Cornell’s hotel school, “we want to be a part of that.”

Susskind did not respond to a request for comment.

The backlash also stems from a recent shift in how American academics approach China. While a decade ago, many believed that increased academic engagement with China was beneficial because it might expose the next generation of Chinese elites to democratic ideals, today faculty members are asking whether Cornell should have any ties with Beijing at all.

The shift is the result of a growing awareness of Chinese state repression—not only in Xinjiang but also in elite Chinese universities. Professors say that Chinese authorities routinely suppress academic freedom at Chinese campuses, including at Peking University, where authorities kidnap students and subject them to inhumane interrogation techniques for speaking their minds about labor issues.

Professor Magnus Fiskesjö, a Cornell anthropologist who studies Uighur issues, told the Free Beacon that these Chinese universities are often under the direct control of the Chinese state, which directs them to violate academic freedom and other human rights. “I thought that [the dual degree program] was not a good idea because all these universities are similar in that they are under the thumb of the government; this is the Chinese Communist Party (CCP),” Fiskesjö said.

University administrators countered those concerns by pointing to several ethics agreements with Chinese universities that they say will protect the academic freedom of students and faculty members in these programs.

Friedman, former chair of the China ethical engagement committee, is not convinced that the provisions in those ethics documents are actually enforced. “We have good principles that are enshrined in the university’s core value statement, as well as in the guidelines on ethical and international engagement,” he said at a March 10 faculty meeting. “They need to be rigorously enforced, and currently, they are not.”

The university responded to a detailed list of questions from the Free Beacon with a statement from the provost, who repeated his claim that it was the administration’s responsibility to review ethical considerations, not that of the faculty senate. “My suggestion was that going forward, the full faculty senate could focus on more general recommendations,” Kotlikoff said.

The senate will hold a nonbinding vote on the issue on March 17. Administrators can push ahead with the plan even if professors disapprove, but the stakes are high. If faculty members vote against the joint degree program, they might also oppose Cornell’s many other programs in China.

Abandoning those partnerships would be disastrous to the university’s bottom line; something Fiskesjö says may be its only choice.

“If you carry on business as usual, you end up legitimizing and endorsing what they’re doing,” he said. “You can run genocide … and it doesn’t matter, we’ll keep opening new exchange programs with you.”