Nearly 90% of people in Australia are considered fully vaccinated against Covid-19, but despite this, the country is still riding the largest wave of Covid-19 deaths to hit the country since the beginning of the alleged pandemic in 2020, a wave that began in February 2022.

Therefore, Australia has provided the world with unequivocal evidence that the Covid-19 injections not only simply do not work, but in fact, make recipients worse.

The following chart shows the number of Covid-19 cases reported per day across Australia from the beginning of the pandemic in March 2020 to the present day: 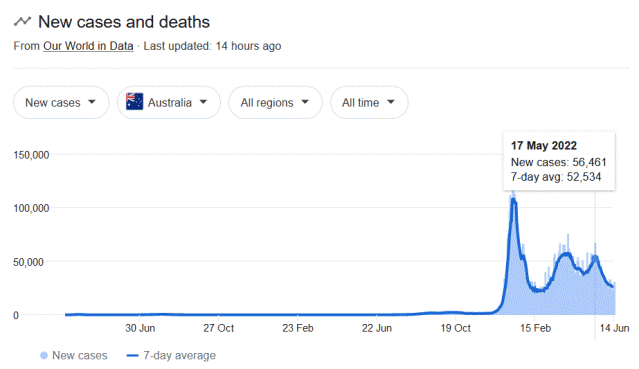 Prior to August 2021, the number of confirmed Covid-19 cases recorded in Australia per day was struggling to hit double figures, with triple figures only being reached as far back as August 2020. From August onwards, the number of cases being recorded managed to hit four figures.

But then towards the end of December 2021, the number of cases being recorded was out of control, climbing to a peak of 128,85 cases recorded in a single day on the 13th of January 2022. The problem is the wave hasn’t subsided and Australia is still riding it as of June 2022.

The following chart shows the number of people considered vaccinated against Covid-19 in Australia: 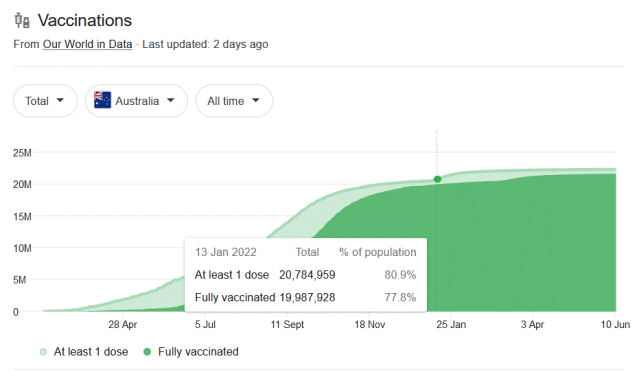 As one can see, on the 13th Jan 22, the day Australia recorded its most cases in a single day to date, 81% of Australia had received at least 1 dose of a Covid-19 vaccine, and 78% of Australia were considered fully vaccinated.

This unequivocally proves that the Covid-19 injections not only simply don’t work, in fact make recipients more likely to be infected due to their acquired immunosuppression (VAIDS).

To those now screaming that all those cases were and are probably being recorded among the unvaccinated population, we say “think before you speak”. Because further official data from Australia proves otherwise.

The Government of New South Wales, Australia had been producing a weekly Covid-19 Statistical Report, but they then decided to stop publishing it. Why? Probably because of how terrible the data was looking for those who have chosen to be vaccinated.

Here is how the figures added up between 26th Nov 21 and 5th Feb 22 according to the now neglected Government of NSW report: 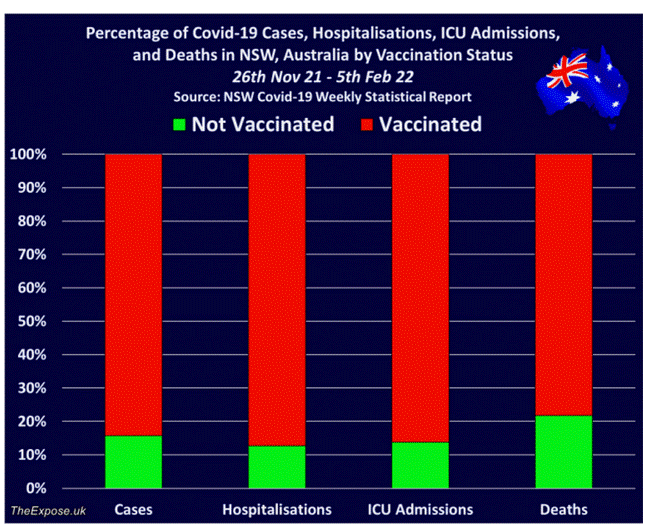 The above graph documents that the fully vaccinated population really did account for 4 in every 5 Covid-19 cases between 26th November and 5th February 2022.

“Well at least the vaccine protects me against death”, we hear the „Experts“ shout. But these „experts“ are wrong again, unfortunately.

The following chart shows the number of recorded Covid-19 deaths per day across Australia since the beginning of the alleged pandemic in March 2020 to the present day: 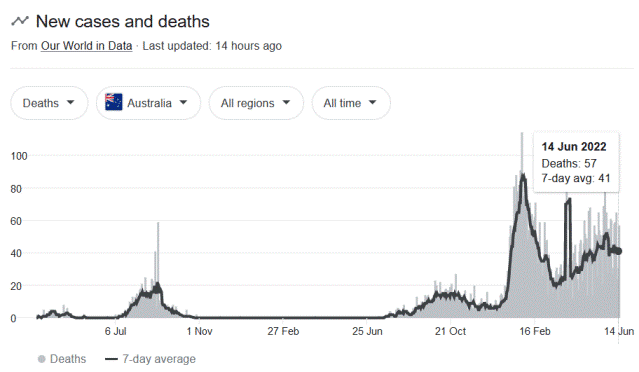 Since January 2022, Australia has suffered its largest wave of Covid-19 deaths in over two years, and unfortunately, it is a wave that the country is still riding.

“But it is probably unvaccinated who are dying”, we hear the „experts“ shout.

The Government of New South Wales has been revealing the number of deaths by vaccination status in a new daily ‘Covid-19 Statistics’ update, the full list of which can be found here.

We went through the 31 reports for March 22 and tallied up the deaths by vaccination status which were as follows: 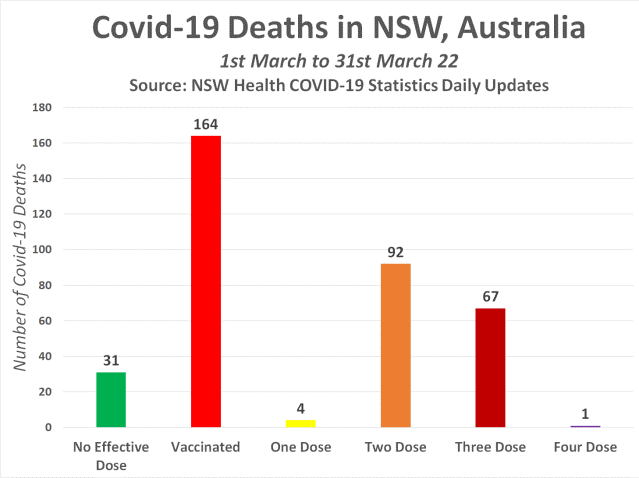 Between 1st and 31st March 22, the Government of New South Wales claims 195 people sadly lost their lives. This is 8 times as many deaths as what occurred during the first three months of the pandemic in New South Wales Australia back in 2020.

Of the 195 people to sadly lose their lives on March 22, just 31 were considered not-vaccinated, but even this may not be true because the Government of New South Wales still considers a person unvaccinated within 21 days of actually being injected with a Covid-19 jab.

The following chart shows the percentage of Covid-19 deaths by vaccination status in NSW, Australia between 1st and 31st March 22: 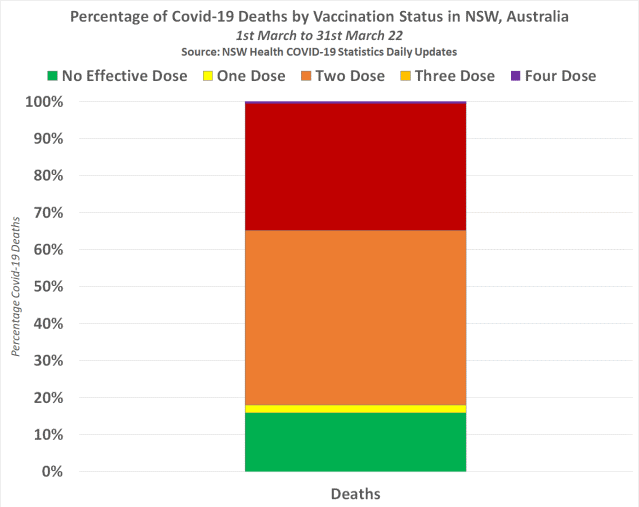 This means the vaccinated population as a whole accounted for 84.2% of all Covid-19 deaths in New South Wales, Australia, during the month of March 2022.

There is no wonder the Government of NSW wanted to make that statistic both hard to understand and tedious to find.

Thus; there one has it, with nearly 90% of Australia considered fully vaccinated, and the country suffering its worst wave of Covid-19 deaths to date since the turn of the year, alongside evidence that it is mainly the vaccinated who are dying, Australia has just provided unequivocal proof that the Covid-19 vaccines do not work and make you worse.