Atopy in children of families with an anthroposophic lifestyle 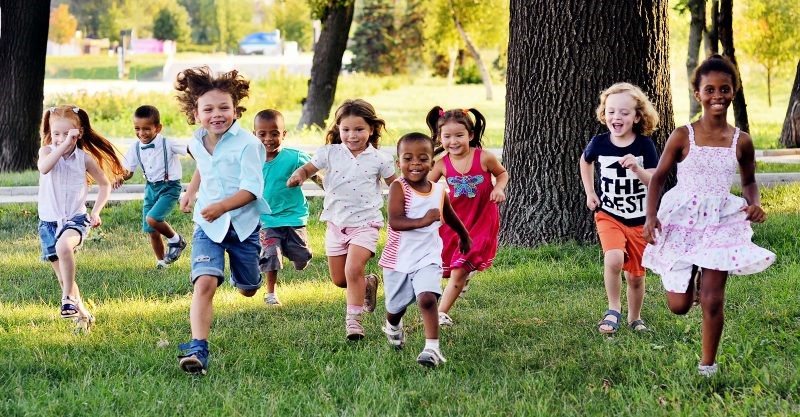 Background: Increased prevalence of atopic disorders in children may be associated with changes in types of childhood infections, vaccination programs, and intestinal microflora. People who follow an anthroposophic way of life use antibiotics restrictively, have few vaccinations, and their diet usually contains live lactobacilli, which may affect the intestinal microflora. We aimed to study the prevalence of atopy in children from anthroposophic families and the influence of an anthroposophic lifestyle on atopy prevalence.

Methods: In a cross-sectional study, 295 children aged 5-13 years at two anthroposophic (Steiner) schools near Stockholm, Sweden, were compared with 380 children of the same age at two neighbouring schools in terms of history of atopic and infectious diseases, use of antibiotics and vaccinations, and social and environmental variables. Skin-prick tests were done for 13 common allergens, and we took blood samples from children and their parents for analysis of allergen-specific serum IgE-antibodies.

Background: The anthroposophic lifestyle has several features of interest in relation to allergy: for example, a restrictive use of antibiotics and certain vaccinations. In a previous Swedish study, Steiner school children (who often have an anthroposophic lifestyle) showed a reduced risk of atopy, but specific protective factors could not be identified.

Objective: To investigate factors that may contribute to the lower prevalence of allergy among Steiner school children.

Methods: Cross-sectional multicenter study including 6630 children age 5 to 13 years (4606 from Steiner schools and 2024 from reference schools) in 5 European countries.

Results: The prevalence of several studied outcomes was lower in Steiner school children than in the reference group. Overall, there were statistically significant reduced risks for rhinoconjunctivitis, atopic eczema, and atopic sensitization (allergen-specific IgE > or =0.35 kU/L), with some heterogeneity between the countries. Focusing on doctor-diagnosed disease, use of antibiotics during first year of life was associated with increased risks of rhinoconjunctivitis (odds ratio [OR], 1.97; 95% CI, 1.26-3.08), asthma (OR, 2.79; 95% CI, 2.03-3.83), and atopic eczema (OR, 1.63; 95% CI, 1.22-2.17). Early use of antipyretics was related to an increased risk of asthma (OR, 1.54; 95% CI, 1.11-2.13) and atopic eczema (OR, 1.32; 95% CI, 1.02-1.71). Children having received measles, mumps, and rubella vaccination showed an increased risk of rhinoconjunctivitis, whereas measles infection was associated with a lower risk of IgE-mediated eczema.

Conclusion: Certain features of the anthroposophic lifestyle, such as nutrition, restrictive use of antibiotics and antipyretics, are associated with a reduced risk of allergic disease in children and adolescents.

If vaccines are truly effective at preventing sickness, it is only logical to expect that vaccinated kids to be healthier than their unvaccinated peers. In fact, a desire to keep their kids healthy is the reason many parents blindly adhere to the prescribed vaccine schedule. At the same time, however, several official reports have been published that document more than ever about kids with allergies, asthma, chronic diseases requiring medication, autism, and learning disabilities. Is this just a coincidence?

The short answer is no, according to a groundbreaking study from Jackson State University that discovered that unvaccinated children have significantly fewer health problems than those who are vaccinated. The study, which was the first of its kind, looked at more than 600 homeschooled children across four states between the ages of 6 and 12. A total of 261 unvaccinated children were compared to 405 children who were either partially or fully vaccinated, and their overall health was assessed. The findings were published in the Journal of Translational Sciences.

The fact that unvaccinated children have fewer health problems is incredible on its own, but what is really remarkable is just how big the difference is between the overall health of the two groups. In fact, some of the findings are absolutely mind-blowing. For example, vaccinated kids were an incredible 30 times more likely to be diagnosed with hay fever (allergic rhinitis) than their unvaccinated peers and 22 times more likely to have allergies so severe that they require medication. 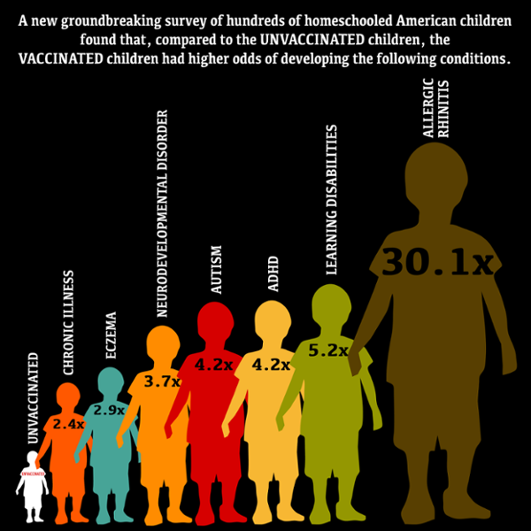 Chronic inflammatory diseases have been skyrocketing in incidence and prevalence in the past quarter century. The details explaining how retroviruses in today’s biological therapeutics including vaccines are contributing to autoimmune, neuroimmune disease and cancer are complex. Although some scientists spent their adult lifetime studying how retroviruses contribute to these diseases, paring down the complexities into basics is a daunting task. But in most vaccine liquids traces of HIV and SIV as vectors are found and sometimes even mentioned in the inserted leaflet for doctors.

Prevalence of Atopy and Allergic Diseases in Korean Children: Associations with a Farming Environment and Rural Lifestyle

Allergic diseases are some of the major causes of morbidity in the westernized world and its prevalence in some parts of Europe still seems to increase. In most of the countries within Europe –from the mid-1970s to mid- 1990s –the prevalence of asthma symptoms have been reported to have increased by 200% in children, bringing the percentage of affected people to 5–20 depending on the age group, with the highest figures among children and teenagers (1, 2). Thus, in the EU countries allergic diseases are the most common chronic illnesses of childhood today, affecting more than one child in four in some countries. However, the variation between countries is substantial.

The increased prevalence in asthma and allergic disease does not seem to be the result of a change in genetic risk factors as we also compared the parents. A number of environmental factors –i.e. some infections, tobacco smoke, poor indoor climate and some allergens seem to coincide with the onset of allergic disease and when the disease is established, these factors may also act as triggers of symptoms (3,4). Thus, there are not only more children with respiratory allergic disease today, but also more children are prone to react after exposure to allergens, indoor and outdoor pollutants and other irritants (4–6).

Protective factors, including certain lifestyles, have been suggested to balance the negative effect of risk factors for onset of allergic diseases. Such protective factors may be prevalent in certain environments such as farming with live stock, anthroposophic lifestyle and with exposure to certain oro-faecal bacterial contaminants (7–12).

This increase in allergic diseases worldwide and mostly in affluent countries has been questioned by others. An article by Magnus and co-workers in 1997, reviewed repeated cross-sectional studies with focus on prevalence of asthma (13). They concluded that the evidence of an increase of the asthma prevalence was rather meagre.

In 2001, Wieringa et al. reviewed the supposed increase of occurrence of asthma and allergy in studies with objective measurements (14). Sixteen articles were found of which nine had used the same objective measurements twice (allergen specific IgE, skin prick test, bronchial hyper-reactivity and lung function) and in six of these a significant increase was found.

In this issue of Allergy, Maziak and co-workers present new data on the change in prevalence of bronchial asthma and allergies among more than 14,000 children and adolescents in Munster in Germany (p. 572; 15). The results are based on two cross-sectional studies 5 years apart (1994/95 and 1999/2000) using the International Study of Asthma and Allergy in Children (ISAAC) core written and video questionnaires and applying the ISAAC protocol. During these 5 years, they observed a substantial increase in prevalence of asthma allergic rhinitis and atopic dermatitis. The increase in prevalence of allergic diseases, i.e. wheeze, atopic dermatitis and rhinitis was most pronounced in girls. Besides, there was an increase in asthma severity, i.e. number of wheeze attacks, speech limiting wheeze and sleep disturbances caused by wheeze, parallel to the increase in asthma prevalence. The increase in severity was also more pronounced among the girls compared with the boys in the study, which brings the authors to reflect on the possibility of previous under-diagnosis of asthma among girls. To us, this may as well be a parental perception of the health of their children and difference in report of symptoms if the child was a boy or a girl. However, because of its design the paper cannot solve this interesting issue.

In studies from some other European countries, e.g. Italy and the UK the increase has recently been reported to come to an end (16, 17). If this holds true, it seems that Italy has a lower point prevalence of allergic diseases compared with UK. It can only be speculated if this is because of the presence of more protective factors in Italy compared with England. The question is however, will the prevalence of allergic diseases in childhood still continue to increase and where will it stop?

What does the future hold for us? With one child in four being allergic today, and as we are facing a steady increase in the prevalence of allergic diseases in Europe in the recent years, it is consequently crucial that more is invested in allergy research. Because of a so-called ‘cohort effect’, the number of allergic individuals is expected to further increase in Europe during the next decades, i.e. the number of individuals with a susceptibility to react to pollution. Thus, we need to increase our understanding of the allergic process and continue to investigate the factors causing allergies. We also need to have a better knowledge of the health care systems, in order to be in a position to meet the demands of the growing allergic population within Europe. The European Academy of Allergy and Clinical Immunology (EAACI) is committed to this fight against allergies. It is our responsibility to take up this challenge and to care for our children and their future, enabling them to enjoy a better health and a better quality of life.

Falasca C, Paggi B, Gugliemi F, Ciofetta G. Is the increase in childhood asthma coming to an end? Findings from three surveys of schoolchildren in Rome, Italy. Eur Resp J 2001;17:881–886