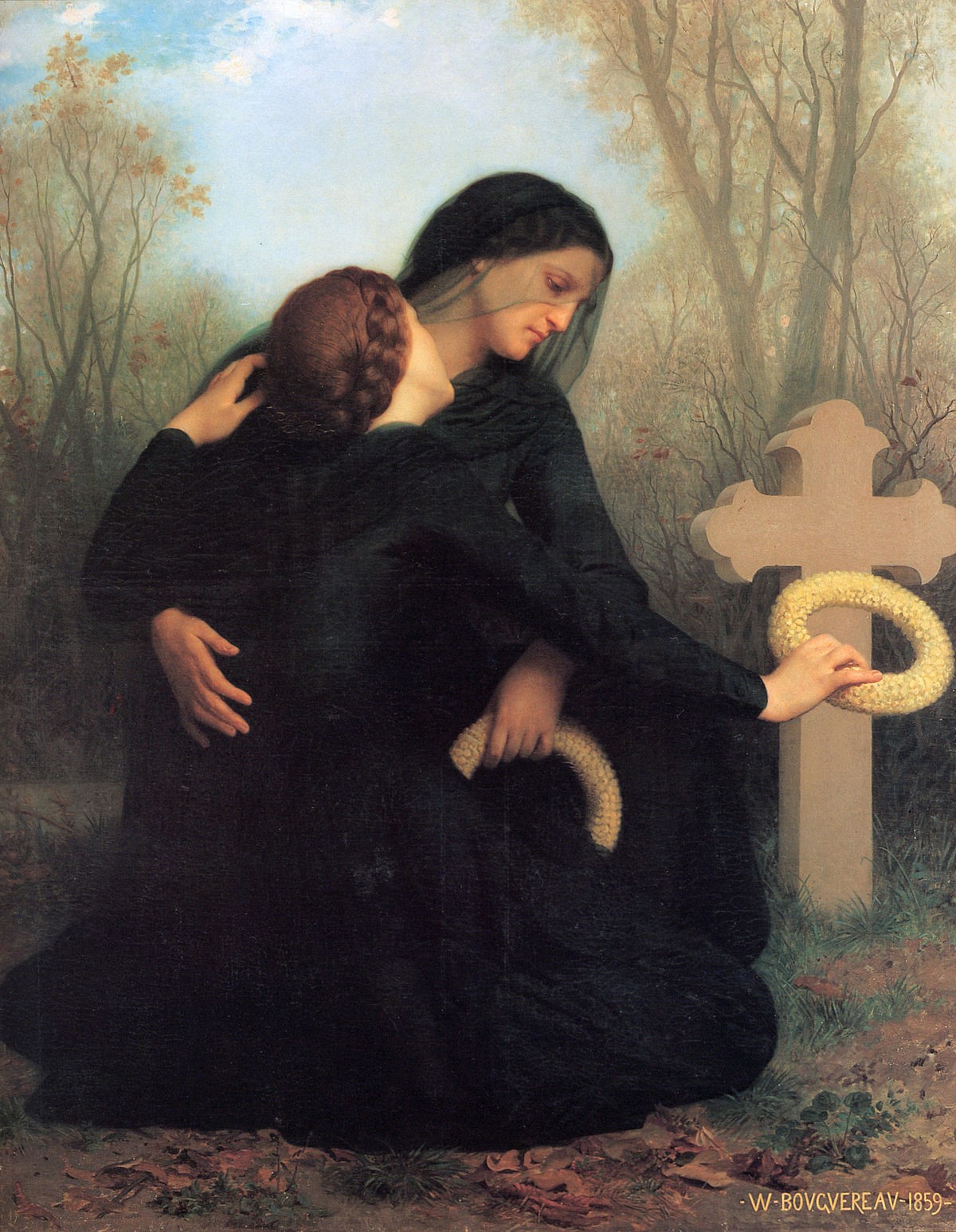 Today is November 2, 2020 and thus All Souls’ Day, the memory of those who preceded us in death. The Daily Newspaper Trouw published today, in memory of all people who died of COVID-19, the article “They all died from the effects of the corona virus”. The average age of those who probably died from COVID-19 was 83 years of age.

During the same period, many more non-covid patients died in intensive care units in the Netherlands as well; patients with conditions other than COVID-19. Sadly, we would almost forget that at a time when all attention seems to be focused only on the SARS-CoV-2 and COVID-19.

In the forty years that we have been attached to the intensive care unit of the ICUs of great academic hospitals, we have seen hundreds of patients die and both witnessed the devastating grief of their loved ones, their distress and despair. Patients such as Jasper, Annemarie, Kacper and Irma. Unexpected deaths from an unshaded existence.

In this blog I do not want to dwell on patients who have died from COVID-19 in recent months and that is emphatically not because they do not matter and their suffering and death is inferior. But because others are already doing that in all kinds of media today. Today I reflect on the death of Jasper, Annemarie, Kacper and Irma. A random choice from my filled memory. In contrast to the vast majority of the COVID-19 patients who died, they were young and perfectly healthy prior to the fatal day. Their death was unforeseen, the suffering of the loved ones was intensely godforsaken and their death made a big impression on me and other care providers.

Jasper was a 20-year-old happy boy. Communication sciences student with a close circle of friends. He lived at home with his parents and younger sister. He did not like a steady girlfriend. He wanted to enjoy his freedom and friendships. A good friend of his told me later.

One afternoon in mid-July, Jasper saw a message in his friend group app. There was an intention to meet and chat along the Maas in Rotterdam. Everyone would bring their own beer. A prospect he was looking forward to.

That day he went by bike from his parental home in Rotterdam Blijdorp to the center. When crossing the Henegouwerlaan and Kruiskade intersection in Rotterdam, he was hit by a motorist who was driving through the red traffic light at high speed. The Medical Mobile Team (MMT) was quickly on site. In view of very serious cranial brain damage, Jasper was intubated on the street by the MMT doctor and connected to a respirator. Besides the serious cranial brain injury, Jasper’s thigh appeared to be crushed. In the hospital, a CT scan of his head was made showing a so-called acute subdural hematoma. The neurosurgeon decided to operate immediately. After the operation, he was admitted to intensive care. He was deeply comatose. The outlook was bleak. The neurosurgeon, intensivist and intensive care nurse told Jasper’s parents and sister that his life was to be feared.

In the following hours, no improvement appeared to occur. His parents were watching next to his bed. His two best friends came to the hospital at night. Silent boys who, with pale faces, looked blankly at their friend who lay motionless in the bed, comatose, mechanically ventilated with a white bandage around his head.

The next day, another CT scan was performed showing catastrophic and irreversible damage to the brain. The examination of brain functions was negative. The intensivist consulted the organ donor registry. It stated that Jasper did not want to be an organ donor after his death. The intensivist and intensive care nurse brought the results of the CT scan and examination to Jasper’s parents and sister. They were the announcers of the coming death. They were told that the initiated ventilation would be stopped and that Jasper would die. The parents looked blankly and in disbelief at the care providers. Jasper’s sister cried incessantly. In the evening, the ventilator was stopped in front of his parents, his sister and his best friend Tim. Within ten minutes, Jasper’s heart stopped beating. Tim just said: “And we really wanted to go and have a beer in the sun. Just that.”

24-year-old Annemarie was urgently admitted to intensive care. The day before the hospitalization, she gave birth to a healthy eight-pound son Bram. In the evening, tired from the delivery and the first maternity visit, she fell asleep quickly. Theo’s husband tried to wake her up in the morning. In vain. She did not respond. He knocked back the duvet and saw that Annemarie was lying in a huge pool of blood. The mattress was soaked. In a panic, he called 112. The MMT was quickly on the spot. The blood pressure could no longer be measured and Annemarie was comatose. Infusions were introduced. Due to a dramatic Fluxus postpartum (excessive blood loss after delivery) Annemarie had gone into deep shock due to bleeding. The doctor tried to plug the bleeding uterus in order to stop the bleeding. Annemarie’s heart stopped in the ambulance. Resuscitation was started immediately. Once at the emergency room, there was spontaneous heart action again. After administering many bags of blood, Annemarie was rushed to the operating theater where the gynecologist removed her ruptured uterus. The situation had stabilized in intensive care, but she was still deeply comatose. Later research found that her brain had been severely damaged. Against our better judgment, they waited. Three days after admission, it turned out that no more brain activity could be measured. Theo was informed that further treatment no longer had any purpose. In the evening, Theo placed their newborn son Bram on the chest of his comatose lover and put Annemarie’s limp arm over Bram. He himself put his head on Annemarie’s shoulder. The intensivist silently stopped the ventilator and silenced the alarms. After about fifteen minutes, Annemarie’s heart stopped. Bram slept peacefully. There was a serene calm in the room. The nurse walked off the patient box, a doctor assistant cursed heart-grounding outside the box as he wiped away his tears.

34-year-old Kacper had come to the Netherlands from Poland to earn money as a construction worker for his family in Poland. He lived in a house with six other Polish men. The warm weather in August lured them outside and they drove to the Kralingse plas in Rotterdam to cool off in the water. At one point, Kacper’s housemates lost him. They peered over the water. One of them saw him face down in the water. He swam towards it and quickly got Kacper out of the way. He seemed drowned. He stopped breathing. Two bystanders started CPR. Others called 112. The emergency services were there quickly. The resuscitation was successful, but Kacper’s brain was later found to be damaged by oxygen deficiency. Four days after the near-drowning, ventilation was stopped and Kacper died. His wife, Wictoria, watched her beloved Kacper in The Netherlands, torn with grief, via a Skype connection from Poland. Two of his housemates were with Kacper and both held his hand during his death. Tears ran steadily down the cheeks of the Polish construction workers with their rough hands.

Every year about 3,000 patients are admitted and treated in the intensive care unit adults of the University Erasmus Hospital. The largest percentage of them are mechanically ventilated. About 20% of ICU patients die each year. More than 85% die after the established life-prolonging treatment is discontinued. In intensive care, death can be directed in the presence of the patient’s loved ones. Most patients die within half an hour after ventilation is stopped.

At a time when all the attention is focused on COVID-19 patients, let’s not forget that all other patients matter too. Today is the day for us to do especially and just that.

For privacy reasons, the names and circumstances, with the exception of Irma and Kacper, have been changed.