According to adverse incident reports collected by the Centers for Disease Control and Prevention (CDC) and the Food and Drug Administration (FDA) 966 individuals have died after having received an mRNA injection for COVID-19 in the USA alone.

Between Dec. 14th 2020 and Feb. 19th 2021, 19,769 reports were made to the Vaccine Adverse Events Reporting System (VAERS) following immunizations with either the Moderna or Pfizer BioNTech mRNA vaccines (the only two vaccines given during the time period assessed). At this time, VAERS data is not available after Feb. 19.

For detailed information drawn from the VAERS reports, see charts provided at the link at the end of this article. 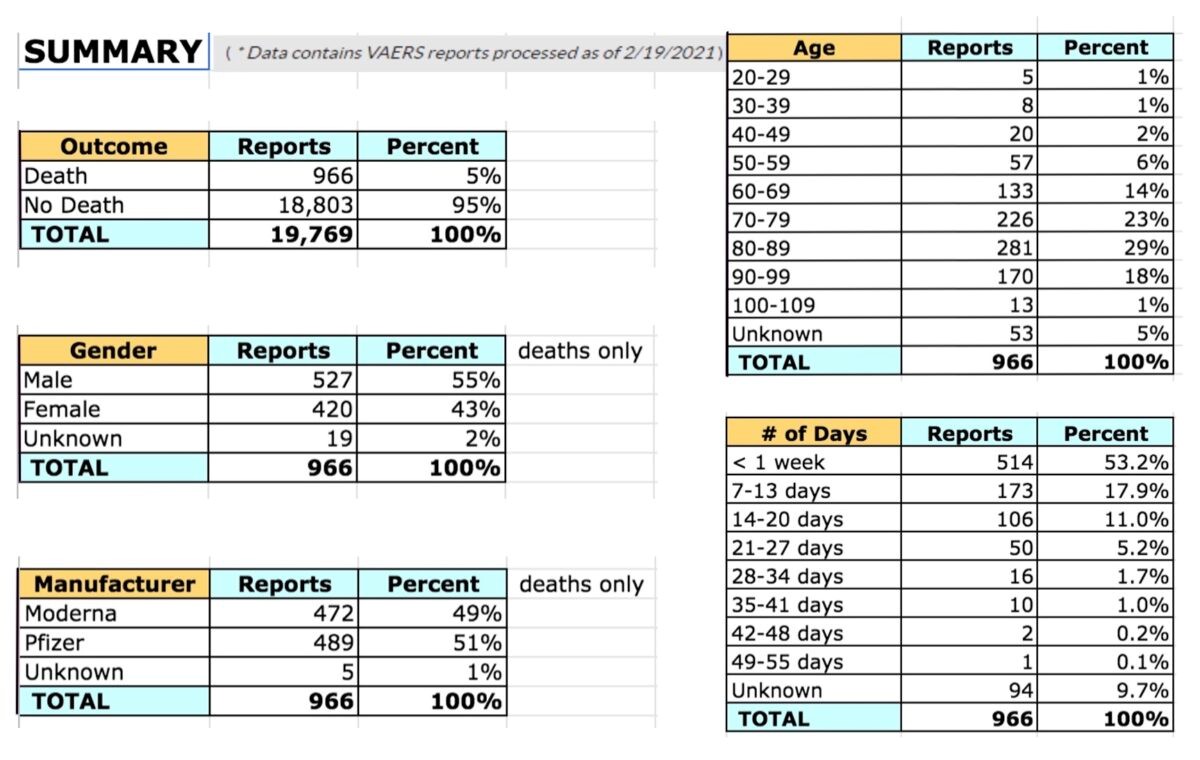 Neither of the mRNA vaccines are FDA approved, rather, they have Emergency Use Approval (EUA). They represent a departure from traditional vaccines in that they do not use any part of the suspected pathogen to stimulate the immune system, but rather, nucleoside modified RNA, from which Moderna drew its name.

Dr. Christian Perrone, head of Infectious Disease at Hopital de Garches in France, stated in a complaint filed in Europe:

“The first vaccines they are offering us are not vaccines. They are gene therapy products. They…inject nucleic acids that will cause our own cells to produce elements of the virus.”

The CDC’s data allows only a ballpark estimation of the rate of deaths following flu vaccination.

In the 2019-2020 influenza season the CDC reports that 51.8 percent of the U.S. population received a vaccine, which are approximately 170 million people.

One should be reminded that approximately only 1 percent of all moderate to severe side effects get ever reported to VAERS.

VAERS was put in place in 1990, to capture unforeseen reactions from vaccines.

The VAERS website describes the system in this way:

“Established in 1990, the Vaccine Adverse Event Reporting System (VAERS) is a national early warning system to detect possible safety problems in U.S.-licensed vaccines. VAERS is co-managed by the Centers for Disease Control and Prevention (CDC) and the U.S. Food and Drug Administration (FDA). VAERS accepts and analyzes reports of adverse events (possible side effects) after a person has received a vaccination. Anyone can report an adverse event to VAERS. Healthcare professionals are required to report certain adverse events and vaccine manufacturers are required to report all adverse events that come to their attention.

“VAERS is a passive reporting system, meaning it relies on individuals to send in reports of their experiences to CDC and FDA. VAERS is not designed to determine if a vaccine caused a health problem, but is especially useful for detecting unusual or unexpected patterns of adverse event reporting that might indicate a possible safety problem with a vaccine. This way, VAERS can provide CDC and FDA with valuable information that additional work and evaluation is necessary to further assess a possible safety concern.”

Without a medical diagnosis or autopsy, the report of an adverse incident following a vaccination is not proof that the vaccination caused any particular symptoms.

The VAERS database is dense with information and can be difficult for some users to follow. The Epoch Times has extracted its data as clearly as possible in charts provided in the link below.