Yes, I am a conspiracy realist: all governments are conspiracies and history proves that 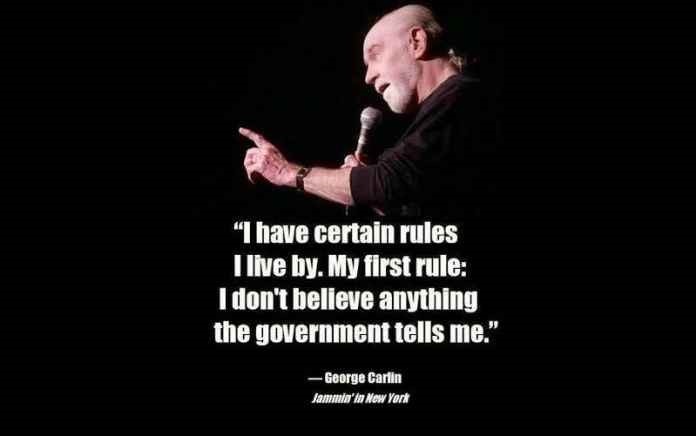 “The reason it is so hard is that we have been conditioned to laugh at conspiracy theories and few will risk being publicly ridiculed by advocating those theories. On the other hand, to subscribe to the coincidence view is absurd. Almost all of history is an unbroken trail of one conspiracy after another. Conspiracies are the norm; not the exception.” ~ G. Edward Griffin, (1995) “The Creature from Jekyll Island: A Second Look at the Federal Reserve.”

For the first time in its history, Western civilization is in danger of being internally destroyed by a corrupt, criminal ruling cabal centered around the interests of the Rockefellers and other billionaire clans, which also includes elements of the Morgan, Brown, Rothschild, Du Pont, Harriman, Kuhn- Loeb, and other groups. This junta took control of America’s political, financial, and cultural life in the first two decades of the twentieth century.” ~ Carroll Quigley, Tragedy and Hope: A History of the World in Our Time

The CIA-created and heavily publicized term “conspiracy theorist,” a term invented to marginalize any doubt about the politically premeditated assassination of JFK at the hands of the CIA, FBI, Johnson, and others, is becoming the norm today.

It is still used today to counter any supported argument, any factuality, or even any discussion of disagreement with the state-sponsored narrative. Anyone who utters this ignorant, idiotic and useless expression as a means of “argumentation” should be immediately disregarded because he does not have the intelligence to speak to a critically minded person. Moreover, those who use this term deserve no respect or rebuttal, Gary D Barnett.

We live in a world where everything that comes from the state is based on lies and deceit, designed to either support or cover up the government conspiracy. Note that the definition of the word “conspiracy,” is a secret agreement between two or more persons to perform some harmful or illegal activity. From the original Latin, it literally means, “to breathe together;” or agree, unite, or conspire. All governments, especially the US and the EU (European Commission), are completely conspiratorial. The chances of any truth coming from the state, from state bureaucracies, from state officials in law enforcement or the military, or from any mainstream media controlled by state entities are almost zero.

Considering the United States; their history, their hidden agendas, their conspiracies, their cover-ups, their abuses against liberty and their own citizens, brutality, and their wars against humanity, every utterance of the state must first be ignored and thoroughly dissected before any acceptance. Once the lies and conspiracies have been exposed, and the truth found and embraced, one should automatically be cautious in the future, but that has never been the case. People tend to forget and point to others to blame: „Not me; Adolf Hitler did!“ („Ich nicht: Adolf ist es gewesen!“) and then: „I did not know!“ („Ich habe es nicht gewußt!“)

While the abuses of power in the US had already reared their head, the American era of deception, lies, and conspiracy began with the so-called “Founding Fathers” and their efforts to solidify in the minds of the masses the need for a powerful central government to protect freedom. In the light of this, they secretly drafted, in the dark of the night, behind closed and locked doors, a political document; all to do away with the Articles of Confederation completely in favor of a fully centralized, unrestricted government, over the people under the false pretense of liberty, and through the nefarious Constitution. That was the beginning of the end of this country, in this writer’s opinion.

What is Propaganda? What can one do about it?

For the purpose here, the beginning of the USA as we know it is believed to be 1776 when the Articles of Confederation were drafted. That’s a history of 246 years, during which time the US has been aggressively waging war for about 230 of those years. It could be argued that there has never been a time when this government was not involved in plans and plots, or was and is active in wars of aggression. Today, the US government and its enforcers are waging war against its own entire civilian population, and against many around the world.

To substantiate that the government conspiracy continues and is forever, a condensed timeline of abuses is needed. Remember that only a few life-changing events will be noted, for the list of conspiracies perpetrated by the ruling class of this country is not only immense but incessant.

There were, of course, wars, the killing and slaughter of the Indian tribes, and the stealing of their land. There is the fact that most of the current US were stolen from its native owners, including the Louisiana Purchase with a conspiracy deal with France, the annexation of all the landmass Mexico owned, all of the west, Hawaii, (although Alaska was bought from the Czar of Russia for 6 million Gold Dollars), and all territories outside the mainland. Most of these seizures were the result of a conspiracy and sheer robbery, but the greatest and most horrific conspiracies began with entering what has been erroneously called the “Civil War,” a war against the Americans, and then the life-changing atrocities of WW I, and these atrocities have continued to this day and are likely to continue long after.

The “Civil War”, WWI, WWII, Korea, Bay of Pigs in Cuba, Vietnam, Gulf War, Proxy War against Iran, Bosnia, Kosovo, Afghanistan, Iraq, Libya, Syria, the whole fake “war on terror,” and now the US staged and supported the war in Ukraine are just a few of the atrocities committed by this administration.

This is just a handful of all the conspiracy wars and coups that the US has been directly responsible for, as the list is almost endless over the past 246 years. It is helpful to understand that all the so-called rationales for being in one of these and other wars and “conflicts,” were staged false flags or just plain lies.

In modern times, the US and its large corporations have conspired, financed, armed, and aggressively fully supported the war at all times. The useful impulse to start the Civil War was a false flag plot at Fort Sumter, staged by the evil Lincoln. The attack on the Lusitania was not an attack against innocent civilians, as reported, but a plot of war already announced to the people of this country, but was ignored, and was one of the events staged to gain support for entry into WWI. The Pearl Harbor “attack” was fully staged and known well in advance so that the evil FDR could gain support to going into WWII against Germany. In fact, the US and US corporations and banks financed and supported Hitler’s rise all the way from 1930 through WWII. The same goes for the rise of the Bolsheviks in the Soviet Union, the total support for the evil monster Stalin, and the building of the Russian war machine, including helping build Russia’s nuclear arsenal, through the entire Cold War. Also, China’s domestic and military build-up was deliberately accomplished with the full involvement of the US over five decades. 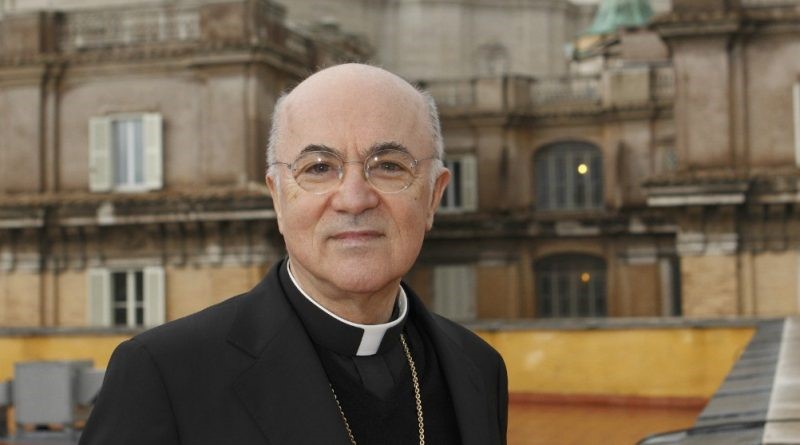 Archbishop Viganò: “Those who oppose the New World Order will receive the help and protection of God.” Vigano is a man who is currently terrifying the hierarchy of the anti-Catholic Church of Bergoglio. This man has been the subject of massive and malicious attacks by the mainstream media. They have tried to denigrate him and portray him as a criminal or as someone who puts society at great risk. This man is Archbishop Viganò and has become like a flame of hope to those Catholics and even unbelievers who thirst for justice and sanity in this upside-down world. Viganò has spoken quietly, but his soft voice has terrified the mighty in the world. Viganò has exposed the Great Reset and the plan to destroy humanity. He has clearly denounced the Black Loges of Freemasonry’s infiltration into society and the Church. These same Black Loges made the Incarnation of Kaspar Hause impossible and established the Federal Reserve.

Again, the “war on terror”, a stupid description at best, has been staged entirely to gain more and more power over the domestic population, while advancing long-planned geopolitical agendas, to the detriment of the majority of the world population. 9/11 was an inside job, a murderous hoax (false flag) with the goal of gaining money, power, and control over this entire country, while facilitating an aggressive war across the Middle East and beyond. This was one big conspiracy, to say the least. One well-documented reason was to take control of those oil-rich nations whose leaders wanted to be free to trade oil in various currencies and not in Petro Dollars only.

And now the world is being taken over by the so-called “elite”, and almost every nation is waging war against its own people. In addition, the “covid” and Russia/Ukraine false flag conspiracy cornerstones in this deception, as determined by these and other governments, the WHO, the CDC, the INH, and the World Economic Forum (WEF); all openly and without cover. The Chair of the WEF (which is a private organization) Klaus Schwab even proclaimed proudly in front of the cameras that the WEF had penetrated almost all governments around the world through his „Class for Young Global Leaders“ and mentioned by name Angela Merkel, Emmanuel Macron, Justin Trudeau, etc. This is a very long-planned conspiracy, which has been carried out for at least thirty years but started decades earlier. None of this is hidden from view and is easily defined as a conspiracy. Even the “war” between Russia and Ukraine has been an ongoing situation for at least two decades, funded, supported, and armed by the US and its proxies; all conspiring.

We are now in the midst of WWIII, and this too is a conspiracy designed to finish society so that the 2030 Agenda, as set out by the UN and accepted far in advance by the WEF, can be physically adopted This conspiracy is already underway but is planned to be part of the final takeover of the societies worldwide. The governments of every country are waging war on their subjects in an effort to form a “One World Government” with unlimited power controlled by the very few technocratic heads of this proposed new global government system blatantly dubbed “The Great Reset”.

Yes, there is not much “conspiracy theory”, just conspiracy facts and reality. Nearly every conspiracy that has been ignored by the docile masses, and considered “conspiracy theory” for decades, has come true. Most, however, still try to marginalize or eliminate any credible debate by claiming that little government action is a conspiracy when just the opposite is not only the case but has proven time and again to be a true conspiracy.

If doing the same things over and over and expecting a different result is the definition of insanity, then the only valid conclusion that can be drawn is that most of humanity is insane. If that’s the case, which seems pretty obvious, what should happen to those of us who know we live in a conspiratorial world? What is to become of those who believe nothing a priori and question everything? What if we, who fully understand what is really going on, are the only ones willing to resist and never give in? What if all of us who take personal responsibility for ourselves and our own are the only ones willing to risk everything to save our freedom? What if we fail to convince others to fight back? If we are defeated, what will become of all the others? There is only one answer to that question; all who remain will be slaves, subject to the very evil state claiming total ownership of their minds, bodies, and souls.

That my dear fellow man is hell!