2020: still Mercury, Aluminum, Embryonic Stem Cells and a long list of other toxic or ethically worrisome ingredients like retroviruses in vaccinations 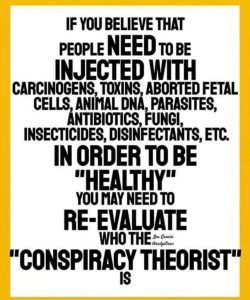 My advice: One might re-evaluate who is the real conspiracy theorist…..?”

As further proof that mercury has not been removed from vaccines, note that there is no federal law or FDA ruling that requires the removal of mercury from vaccines. Mercury is still legal to use in vaccines, and, as you’ll see in the California letter, it’s still deliberately used in vaccine injections administered to children. This is not in dispute. Anyone who is not aware of these facts is (willingly?) uninformed.

At any moment, any USA state health authority or independent nation can simply declare it is “okay” to use mercury vaccines on children, just as happened in the State of California. There is no federal law in the USA preventing it whatsoever. These orders may be made entirely without public knowledge or any attempt by state officials to inform the public.

Thimerosal is made with mercury; its purposes is to kill living things (which is why it’s added as a preservative)

No one has ever refuted that mass spec analysis. It was confirmed by vaccine pushers who said “Thimerosal is listed right on the label,” so of course the vaccine contains mercury.

Well that’s our whole point. They just confirmed it yet again. Flu shots given to children contain mercury and in toxic amounts.

While there is a vigorous scientific debate over whether mercury, aluminum, MSG, formaldehyde, manipulated embryonic stem cells, and antibiotics in vaccines causes autism, there is no debate whatsoever that these ingredients are routinely used in vaccines. Even the CDC openly admits it.

“I am not aware of any medical doctor in the USA or the EU who takes the flu shot himself; nor vaccinates his next of kin.”

There, the formaldehyde Fact Sheet completely neglects to mention formaldehyde in vaccines. This is the “dirty little secret” of government and the vaccine industry. It does state, however, that “…formaldehyde causes myeloid leukemia and rare cancers including sinonasal and nasopharyngeal cancer.”

Also, National Toxicology Programs admits in its documents that: