US government has patents on coronavirus

Coronavirus has been made into a bioweapon through Gain-of-Function. The more you investigate what happened before we were confronted with the fake corona pandemic, the more you will be shocked.

Then you see how corona patents were awarded years ago and that 2012 turned out to be a turning point towards a satanic world.

If you look at the timeline of what has happened in the field of coronaviruses over the past 20 years, a scary picture emerges.

Since 1999, people have started applying for all kinds of patents related to a coronavirus.

In 2003, the world was confronted with the SARS-CoV virus, the predecessor of the current SARS-CoV-2 virus (also known as Covid-19).

Then you get something very remarkable, because the American RIVM, the CDC (Center for Disease Control), applies for a patent on the SARS-Cov virus in 2003 and also gets it.

Then there are a few options. The first is that we are dealing here with a natural virus for which no patent is possible according to international agreements, or it is an artificially manufactured virus and then it is possible to apply for a patent for this, but it has therefore been conclusively demonstrated. that we are dealing with biological warfare (Gain-of-Function).

If it is indeed an artificially created virus, then it is a violation of current regulations regarding biological weapons. Whichever way you look at it, obtaining a patent on the SARS-CoV virus is illegal.

In 2007 and 2012, the CDC filed a petition with the New York Patent Office to keep their patent secret and confidential. By the way, they had not only filed a patent for the virus itself, but also for the way in which the virus can be detected and even for certain treatment methods.

With all those patents, the US CDC has complete control over this virus and no one can research or do anything related to this virus without explicit permission.

Then around 2012, something happens in America that jeopardizes funding for further research and experimentation with this virus. Formally, there are warnings from the NIH (National Institutes of Health) to researchers that they must stop their research because funding is being cut, but that’s just appearances. In front of the world, the NIH plays the “good guy” who has moral objections to what can only be considered the further development of biological weapons.

A few years later, the ground is literally getting too hot under the feet of the scientists who are working on the corona bioweapon and preparations are being made to transfer it completely to Verweggistan (China), out of sight.

Millions of dollars are being made available through a shady financial scheme to set up a lab in Wuhan, China. This is the city that many claim is the source of the virus and from where the spread is said to have taken place. This is constructed in such a way that when something goes wrong no one knows exactly where the money is coming from and America can blame China, but just as easily China can also blame America. And in both cases, they both actually lie just a tiny bit.

The man who appears every time in all this as a kind of spider in the web is the well-known (infamous) Dr. Anthony Fauci. 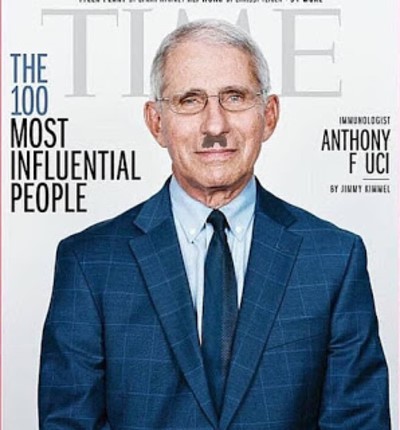 Dr. Anthony Fauci (Head of the NIH and NIDA)

Another well-known name that you encounter with corona patents is the Dutch bag filler Ab Osterhaus. He is also involved in a patent through Erasmus University, assigned to a case related to the coronavirus. In this case, it concerns a patent on a virus receptor (the transport into the cell).

The same Ab Osterhaus is also involved as principal researcher via Erasmus University in a patent on another virus, namely the MERS-Cov virus.

The MERS virus (Middle Eastern Respiratory Symdrome virus) is a relatively new type of coronavirus, which has been known since September 24, 2012. The virus is similar to the more well-known SARS virus.

It is common for lab researchers to patent discovered viruses. According to Osterhaus, this is also in the interest of public health. “If we don’t apply for a patent, no company will develop vaccines or diagnostic tests because they can’t get ownership of them,” the Dutch virologist Bob Osterhaus said. Commercial companies are the main producers of vaccines in most countries.

Here too, of course, the same applies as the previously described patent on the SARS-CoV virus. Either it is a natural thing and it cannot be patented or it is an artificial thing and then it is a bioweapon („Gain-of-Function“). And since both are not allowed, this patent is also illegal.

Of the patents on Corona viruses-related treatment methods and the like, it is of course also a relatively small step towards a vaccine. A way has also been patented to be able to quickly make a vaccine for a coronavirus, which of course comes in handy, because the world is now crying out for a vaccine against the “terrible virus”.

And so we eventually come back to what it is always about and that is vaccinations.

I’m starting to see something else with this too. There is some kind of war going on among vaccine makers, that’s for sure, but I’m also starting to see that different parties have patents on different facets of this virus. One on the virus itself, the other on making the vaccine, the next on test methods, etc. That is of course super complicated if you want to develop something and that actually forces them to work together and they are not very good at that. I think that’s the stage we’re looking at and that determines when a vaccine will or won’t be available. And if there’s one thing that can save humanity, it’s if they all don’t work it out :).

The same reader who wrote the above comes with a remarkable conclusion and that is that the year 2012 has indeed been a turning point, even though it was not the end of the world predicted by many. But of the world as we knew it until then.

Yesterday I suddenly had a kind of insight. That 2012 opening ceremony of the Olympics in England tells exactly the covid story and also what is to come. Also, 2012 was the year the world would “end”. It is no coincidence that this coincides.

I think that 2012 has indeed been a turning point and that evil has made a big step forward there. Since 2012, a lot has changed and the world has gone in a different direction, you feel a totally different energy, at least me. Remote viewing is something that is used within secret services such as the CIA as a means of espionage and to influence future affairs. Project looking has stopped because they couldn’t look beyond the end of 2012….

If there are more people who also feel that there was a certain one around 2012, let us know, with substantiation.

The fact is that after 2012, things really picked up speed and brought us to the point where we are now.

The story about the bizarre corona patents can be found in the film Plandemic in the first 20 minutes. If you click on the image below, you can watch the entire movie for free, which is very worthwhile.