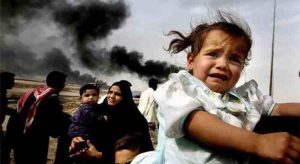 In 1983, Robert Irwin wrote a fantasy novel, The Arabian Nightmare, about a young Englishman who was dragged into a whirlwind of sinister and ridiculous events in Cairo. The Arabian nightmare he learned was like a disease or a curse. It was terrible and obscene, monotonous, but yet fearful. It brought countless sufferings without the realization of such… 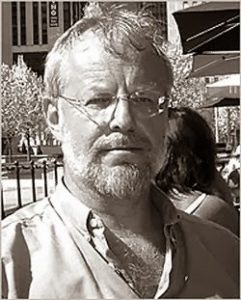 Robert Irwin (*1946) taught Medieval History at the University of St Andrews. He also lectured on Arabic and Middle Eastern History at the universities of London, Cambridge and Oxford.  He has published six novels: The Arabian Nightmare (1983), The Limits of Vision (1986), The Mysteries of Algiers (1988), Exquisite Corpse (1995), Prayer-Cushions of the Flesh (1997) and Satan Wants Me (1999).

The Arabian nightmare has come to the West. It has come invisibly and struck it like an evil curse. It subdued Western people gradually – through arson, sexual violence, “Salafi” vice squads and Muslim parties, under the slogans of tolerance and multiculturalism.

The miserable Eloi did not even understand that they had been turned into cattle being slaughtered in the light of day on their streets. In a desperate attempt to escape from the Arabian Nightmare, the ruling elites used all conceivable methods of escapism:

Method #1: to level terror with other types of violence. In August 2017, the Canadian Globe and Mail recommended that “social networks should treat far-right extremists like Islamic State.” The expert on terrorism for CNN, Paul Cruickshank, called the massacre that happened in Manchester at the concert of Ariana Grande a “right wing false flag plot.” Leanne Wood, the leader of the Welsh Plaid Cymru, claimed that the Barcelona massacre was a deed of “far right” extremists. According to Democratic Senator Claire McCaskill of Missouri, white racists are much more dangerous than Muslim terrorists.

Method #2: to declare that Islamic terror isn’t Islamic at all. We learned that the Islamic State (ISIS) had nothing to do with Islam, and shouting “Allah akbar” during an attack is nothing more than praising the world and its creator. The expert on counterterror for MSNBC, Malcolm Nance, said that the terror attack that took place in New York City on October 31, 2017 was anti-Islamic — “None of that is Islamic, it’s anti-Islamic.” According to Neil Coyle (Labour Party), “attackers at London Bridge and Borough market …were not true Muslims,” and so on.

Method #3: (the most common one) is to declare that fanatics are mere psychopaths. Thus after the terror attack act at Hamburg’s supermarket in August 2017, the terrorist was described by Spiegel as a man with mental issues. The knifeman who killed one person and injured several more people while shouting “Allahu akbar” on May 10, 2016 apparently had psychiatric disorders, and so on.

Method #4: to hide both the ethnic origin of the terrorists and their motives. The New York Times called the terrorist on Westminster Bridge a “knife-wielding assailant,” and wrote about Manchester jihadist Salman Abedi that “no one yet knows what motivated him to commit such a horrific deed.” After the London terror attacks on June 3, 2017, CNN wrote that the “motives of the crime remain unknown.” After the massacre in Nice, Le Monde, BFM-TV and La Croix decided not to publish images of the terrorists, and Europe 1 radio station didn’t even mention their names. According to Fjordman, this is a favorite method of Aftonbladet and other Swedish newspapers.

Method #5: to accuse of Islamophobia anyone who dares to state the name and religion of a terrorist. “Focusing on whether the Parsons Green bomber [21-old Syrian refugee] was a refugee is shamelessly Islamophobic,” the Independent wrote.

Method #6: to blame the terror phenomenon on some social problems. After the Orlando massacre, the Washington Post emphasized that the main problem was the free sale of guns. It is worth noting here that this method is widely used by the Democratic American establishment.

Method #7: terror as a marginal spontaneous and unresolvable phenomenon in principle — something like seasonal flowering or inconveniences caused by pigeons. You wouldn’t kill pigeons only because they poop everywhere or pull out flowers in parks only because someone is allergic to them, right? “Europe has to get used to this,” BBC host Katty Kay said after the suicide bombing at Ariana Grande concert. After the truck attack on Bastille Day, France’s Manuel Valls said that “we should learn to live with terrorism.” French Presidential candidate (and now President) Emmanuel Macron described terrorism as an “imponderable problem” that would be “part of our daily lives for the years to come.” “Americans must prepare for the future where terror becomes routine,” according to the former FBI Assistant Director for Counterintelligence under Barack Obama’s administration, Frank Figliuzzi.

Finally, here is the last method from the arsenal of totalitarian regimes: censorship, fines, prohibitions and a mere withdrawal of posts, as Facebook, Twitter and YouTube do.

However, because the number of terrorist acts is growing so rapidly, all these methods have become untenable. That’s how the new concept appeared: terror as something insignificant, an unpleasant accident like a thunderstorm, a car bumping into a cow, an icicle or a tree falling on a passerby:

On July 4, 2017 in Toulouse, two motorcyclists opened fire on passers-by, having killed one and wounded six people. According to France 3, one of the gunmen was wearing traditional Muslim clothes. The police said that the idea that it was a terror attack was unlikely…… just mental stress.

On September 13, 2017, again in Toulouse, a knifeman attacked passersby while shouting “Allah akbar.” The police is still investigating the incident……

September 15, 2017 – several people were injured due to the explosion at the London Underground. The incident is being investigated…  he must have been a psychopath: what else? 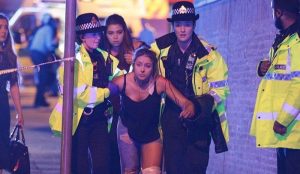 Because the number of terrorist acts is growing so rapidly, this new concept appeared and the public should learn to accept it: terror as something insignificant, an unpleasant accident like a thunderstorm, a car bumping into a cow, an icicle or a tree falling on a passerby

September 26, 2017 – another explosion at the London Underground; five people were injured. The police reported that a mobile phone charger had caught fire but several witnesses reported the Arabic-looking men shouted many times: “Allah akbar”

14 February 2018 – a knifeman wounded five people in Paris. The police denied that the incident could be linked with terror. He must have been under stress as it is not easy to be a migrant….

26 February 2018 – a powerful explosion in a shop in Leicester UK murdered five people and destroyed a two-story building. Police reported there was no connection between the incident and a possible terror attack. Maybe it was a local earthquake?

4 March 2018 – a mysterious explosion in the northeast of London. The incident wasn’t linked to terrorism. Not surprising…

6 March 2018 – a Muslim person (the Koran was found in his car) crashed into three cars in the tunnel of Gothenburg and attacked a policeman with a knife. Of course this was not a terrorist act but a mentally stressed-out migrant.

8 March 2018 – a knifeman wounded three passersby in Vienna. Near the place of the first attack there was another one – another person got injured. The motives of the two attacks are unknown but the attackers were Middle Eastern-looking…

The Daily Mail wrote that machetes had become the main weapon of attacks in England. In the last two months of 2017, 928 attacks occurred: 425 in London, 99 in Manchester, 77 in the West Midlands. On average about 15 machete attacks occur daily — every 90 minutes. What a wonderful British tradition to attack each other with a machete – don’t you think so?

On 5 May 2018, a Muslim person shouting “Allahu akbar” wounded three passersby in The Hague. The reason for the attack was unknown – as you remember, “Allahu akbar” is nothing but a praise to the world and its Creator…

On 20 May 2018, a Muslim migrant seriously wounded two people in Neubrandenburg, Germany, calling “Allahu akbar”…. The reasons again were unclear and must have been a person trying to learn Arabic……

On 21 May 2018, men in hoods opened fire with Kalashnikov rifles upon a group of people in Marseilles. Police ruled out terrorism as a motive and this claim was made at the spot minutes later after the attack…..

25 May 2018:  Unknown people detonated a self-made bomb in a restaurant in Mississauga, Canada, having wounded 15 people. Police reported that the motive of the attack was unknown.

On 29 May 2018 – two female policewomen and a civilian woman were killed in a shooting in Belgian city of Liège – the gunman was shouting “Allah akbar.” The idea that this was a terror attack wasn’t confirmed. ISIS claimed responsibility for massacre. However, according to the Belgian police and media, it was too early to take this claim seriously. Since then, no further information on the investigation….

On June 1 2018, in Manchester, a car rammed pedestrians and seriously injured five people. The police reported there was no evidence to suggest that this was terrorism related but he had a copy of the Quran in his car……

30 May 2018 – a knifeman of Arabic-looking descent stabbed two people at a train station in Flensburg, Germany. A police spokesman was not aware of any connection to terrorism.

3 June 2018 – a knifeman rampaged at Berlin Cathedral and was verbally aggressive in German and Arabic. “The suspect had no motives for a terror attack.”

18 June 2018 – a stranger opened fire on a crowd of people in Malmo, having injured 5 people. “The incident has no connection to any terror attack.” It looks as if the Swedes developed a new hobby – to open fire on random people on the streets…

18 June 2018 – shooting at a festival in New Jersey left 22 injured and 1 dead. The police version is that the shooting appeared to be gang-related. Do gangsters shoot random people? Take a look at their photos and the names. They were all men from a migrant background

20 June 2018 – another “small explosion” at the Southgate tube station in North London. Only five people were injured (there are neither Hamas militants, nor activists of Black Lives Matter to mourn them). Of course, there was no connection with terror.

We assume that these cases are just the tip of the iceberg.

There is no sex in the USSR. No, this is not a joke. This was said during the Leningrad-Boston US-Soviet Space Bridge on July 17, 1986 by the administrator of Leningrad Hotel Lyudmila Ivanova. In the USSR, sex was associated with debauchery and pornography, and there was none of this in the country. In the USSR there was also “no crime, homosexuality, prostitution and alcohol or drug addiction.”

Today there is no Muslim terror in the West. Bullets accidentally fly out of guns, shops and subway cars explode spontaneously, cars squash pedestrians on their own, machetes and knives fly in the air on the own, cutting, chopping and stubbing passersby. Is it a consequence of the global warming? Quite possible.

Countless sufferings without the realization of such…

Alexander Maistrovoy is the author of Agony of Hercules or a Farewell to Democracy (Notes of a Stranger), available at Amazon and Barnes & Noble.