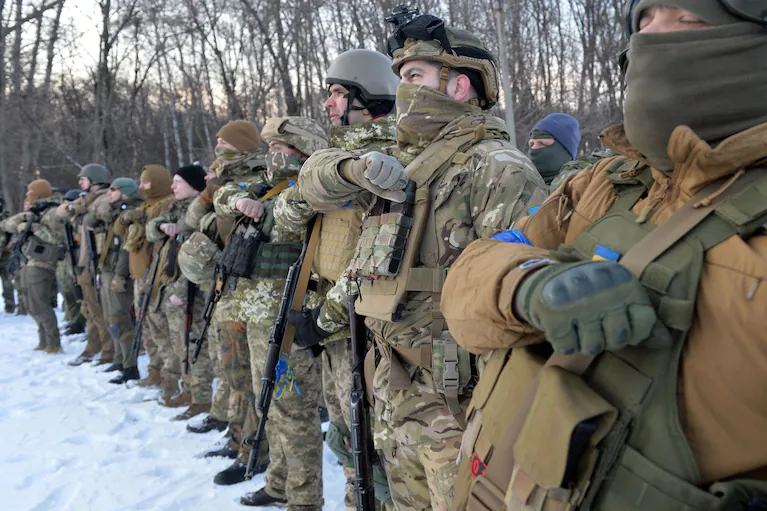 “Hi; can you please forward a message since two of us are trying to get a carshare from Germany to Ukraine going,” reads a Feb. 26, 2022, message forwarded to a popular neo-Nazi Web channel.

“We are 3 french, leaving Strasbourg tomorrow morning with our car,” another message answered. “There is the place for 2 German fighters.”

These are the types of conversations that have flooded Western neo-Nazi and white-nationalist venues online every day since Vladimir Putin ordered the invasion of Ukraine: users organizing carpools, plotting how to cross the Poland-Ukraine border to join the fight against Russia. Their goal is not to defend Ukraine as we know it — a multi-ethnic, democratically-minded society led by a Jewish president. Some neo-Nazis simply see this new war as a place to act out their violent fantasies. For others, though, the force pulling them toward the conflict is a shared vision for an ultranationalist ethnostate. They see Ukraine as a golden opportunity to pursue this goal and turn it into a model to export across the world.

Who are Ukraine’s far-right Azov regiment?

The far-right neo-Nazi group has expanded to become part of Ukraine’s armed forces, a street militia, and a political party.

On March 31st, 2022, Zelensky addressed the Dutch parliament in a lecture, transmitted by zoom.

Speaker of the House of Representatives Vera Bergkamp said she considers it ‘an honor’ that Ukrainian President Zelensky addresses parliament (Tweede Kamer). “The invasion of Europe was a black day for Europe. The attack on Ukraine was not just an attack on one country. It is an attack on peace, security, and democracy,” Bergkamp said. She also expressed support and compassion for the people of his country.

At the beginning of his video speech, Zelenski recalled diplomatically the bombing of Rotterdam at the start of the Second World War. Of course, this is not true. WW II had started when the Nazis invaded Poland several months earlier. He said many cities in his country are being bombed by the Russians.

Journalists traveling through Ukraine paint a very grim picture of the Ukrainian army. Journalist Patrick Lancaster spent a day riding an ambulance in the city of Mariupol and spoke to members of the Donetsk people’s militia who are helping the Russians.

A member of the people’s militia told Lancaster that the Ukrainian army is firing at civilians at close range. “They hide behind civilians and shoot! Like rats in a trap! That’s what happened here. And the wounded are brought in here!”

“They shoot people randomly! They are hunting people! They’re using the city as a shooting gallery! They are Nazis!” he continued.

He pointed out to Lancaster that a Ukrainian tank shelled Mariupol’s central hospital. People who tried to escape were shot. “Ukrainian troops have done that! We are not fighting Ukraine. We fight against fascism!”

He also showed the journalist sea mines that have been deposited in the city by the Ukrainian National Guard.

Journalist Sonja van den Ende paid a visit to a school in the city of Horlivka in eastern Ukraine that was bombarded by the Ukrainian army a few days earlier. The school was partly destroyed and two teachers were killed instantly, according to Van den Ende.

In the newly liberated city of Volnovakha, a woman said she couldn’t believe Ukrainians are doing this to each other. “Don’t fall for the propaganda of the western governments is my advice. The once ‘free’ West has become a totalitarian state, as we could already see during the so-called corona pandemic, where the consequences of the oh-so ‘innocent’ vaccinations are now becoming visible,” writes Van den Ende.

Last week, on my journey through the Donbas, in the Free People’s Republic of Donetsk, I visited the city of Gorlovka with the Russian army and we were shown around a school that had to endure an attack by the Ukrainian army a few days ago. The school was partially destroyed and two teachers were killed instantly.

Since 2014, Gorlovka  has been located directly at the front and fierce fighting has taken place. According to the Office of the UN High Commissioner for Human Rights, executions of civilians and indiscriminate bombing of residential areas have taken place since 2014 and these acts can be characterized as war crimes. Since 2014 there have been 9,470 deaths, of which about 2,000 civilians, 22,000 people were injured.

“I now see with my own eyes that the West is spreading propaganda on a daily basis and thus bringing in millions of refugees who can work for low wages,” she adds. “Zelensky should be ashamed of himself, many ailing citizens told me.”

“The many attacks in Kyiv and other cities have not been caused by Russians, but by the various battalions that have joined the regular army. These battalions use people as shields,” emphasizes the journalist.

German journalist Alina Lipp shows in her videos how Ukraine has been committing genocide against the Ukrainian population for years. “Western countries support this regime and supply weapons to Ukraine. Our western countries are currently supporting a Nazi regime in the middle of Europe,” Lipp emphasizes. 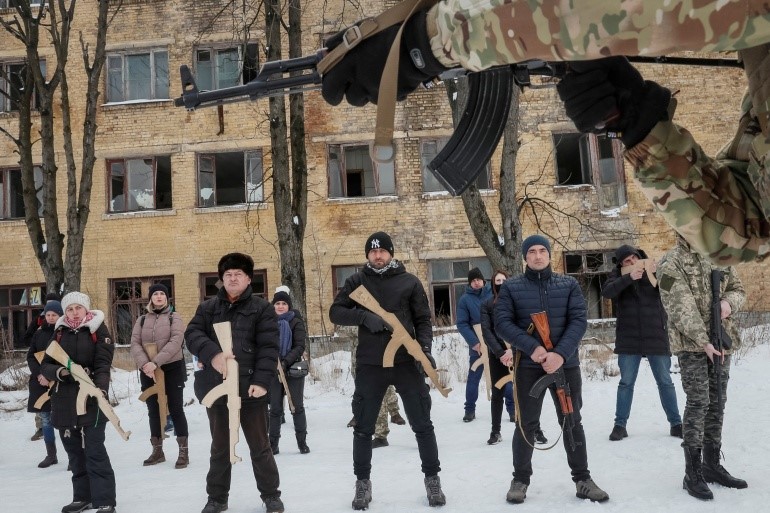