Soon, FEMA squads and U.S. soldiers will be coming to your door to vaccinate you at gunpoint (or drag you away to a COVID-19 death camp) 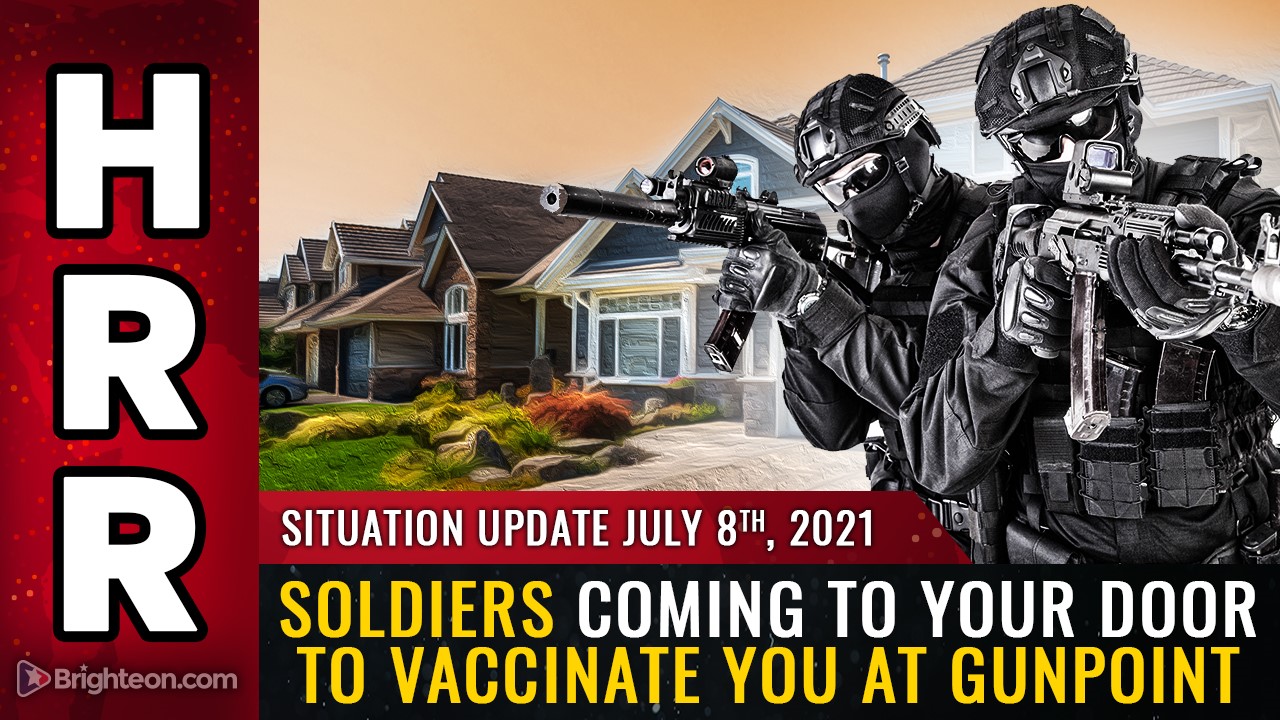 (Natural News) The scenario I’ve been warning about for years is finally here. It’s now confirmed by the White House that FEMA goon squads will be going “door-to-door” across America to coerce unvaccinated people into taking deadly bioweapons to spike protein kill shots.

It is now openly admitted that the Joe Biden government is keeping lists of those who are not yet vaccinated, and just today, Biden’s Health Secretary Xavier Becerra doubled down on the plans, claiming, “knocking on a door has never been against the law” and adding, “Because if you haven’t been vaccinated, we can help dispel some of those rumors you’ve heard and hopefully get you vaccinated.”

Rumors that the government would be knocking on your door to coerce you into getting injected with a deadly bioweapon? That’s not a rumor, Xavier, that’s an admitted fact.

It turns out that it’s a violation of the law for the federal government to trespass on private property and harass private citizens over their vaccination status. As Robert F. Kennedy aptly states about this nefarious plan:

It’s a foreboding fork in the road to totalitarianism. We are now moving beyond the propaganda stage into this very coercive program where federal agents appear at American homes with the menacing message: ‘We know who you are and where you live. We have you on our list, we have your medical records, we want your neighbors to know that you are dangerous. We don’t recognize your property or privacy rights. You must take our untested, experimental pharmaceutical product. If you want to end this harassment, you must submit to a risky medical intervention made by an unscrupulous company with no liability, and if you die or suffer permanent neurological injury, tough luck!’

The Biden regime’s totalitarian plan to threaten Americans on a door-to-door basis smacks of a medical dictatorship where no human rights or civil rights are respected whatsoever. This is exactly what we have been warning about over the last several years, usually being mocked by the controlled left-wing media that repeatedly insisted there would never be door-to-door vaccination coercion campaigns in America. They even claimed there would never be vaccine passports or vaccine mandates: Now we have all three.

From The Epoch Times:

“Door to door to vaccinate Americans this year… door to door to confiscate guns next year?” asked Rep. Lauren Boebert (R-Colo.) on Twitter.

“In 2021, the nine most terrifying words in the English language: ‘I’m from the government, have you been vaccinated yet?’” wrote Rep. Andy Biggs (R-Ariz.).

White House spokesperson Jen Psaki confirmed all this over the last two days in official statements. Biden’s Health Secretary doubles down on it. They can’t wait to round up the anti-vaxxers because they know people who resist deadly vaccines are the same people who tend to own guns and vote Republican.

The US government just declared unrestricted warfare on the American people.

This announcement by the White House is a declaration of war against the American people. They’re essentially saying you get to choose the method of your execution:

1) You can be executed by the spike protein injection which will likely kill you over the next year or two, or

2) You can be executed in a FEMA COVID-19 death camp for refusing the vaccine. In this case, you will die via guillotine or hanging or a forced spike protein injection at the camp.

If they don’t manage to find you, they will still try to starve you to death with engineered food shortages (famine) that are now being ramped up across America and the world.

That is why all billionaires are buying up agricultural land with Bill Gates being the biggest landowner in the USA with 6%. And Besos is ranking second with 4,5%.

This is an all-out war against humanity, and it’s being waged on a global scale. The criminals in charge are knowingly exterminating their own people by the billions, all while claiming I will be for “public health.”

The only people who survive this will be those who are:

Far away from blue cities.

Well stocked and prepared to survive at least one year without a power grid.

In essence, you can now either choose to DIE (and comply) or LIVE (and resist the medical tyranny).

About half of the U.S. population has already chosen to die via spike protein injections. The Biden regime is now trying to mop up the other half to achieve a high killing rate, specifically targeting counties and regions with high “vaccine hesitancy” scores.

Another astonishing podcast will be published tomorrow at:

See VaccineJihad.com for more stories about vaccine zealotry and fanaticism.

Another astonishing podcast has been published at: