Smallpox, Money Pox and The Vaccines: They Will Try to Frighten You into Getting the Vaccines

(with thanks to The Exposé) 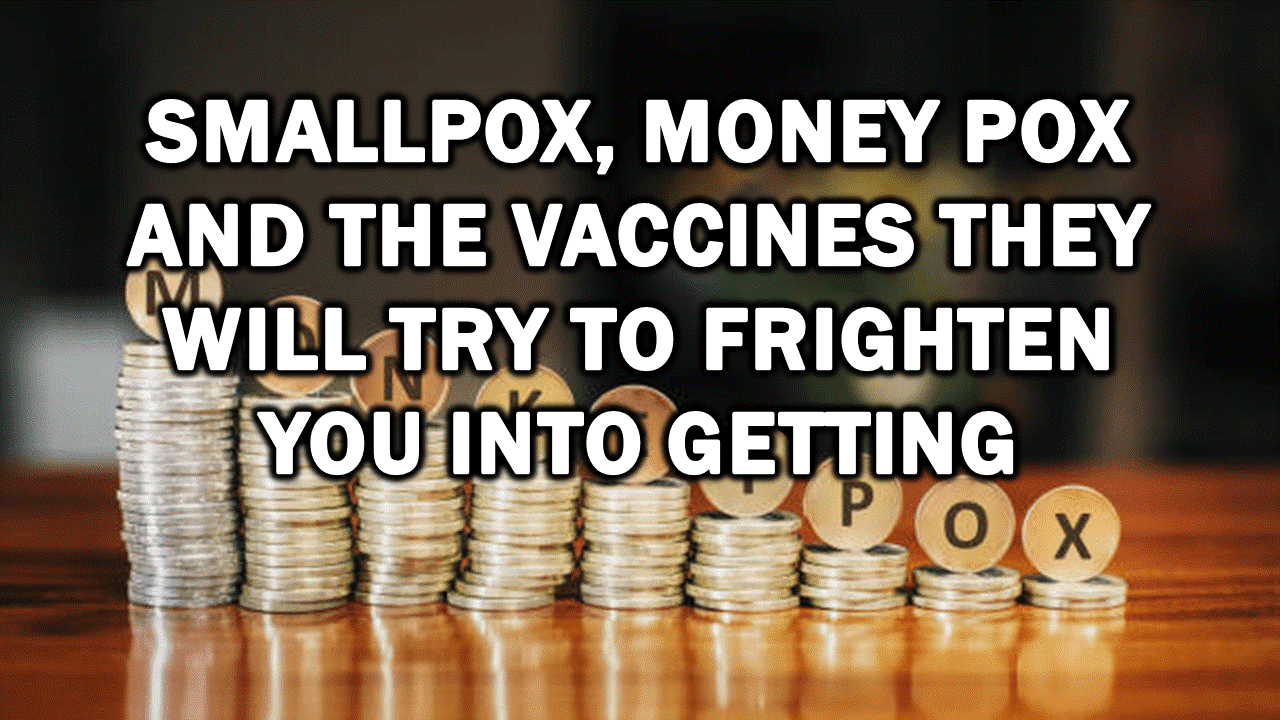 Dr. Meryl Nass provides some basics about the budding “pandemic” and the proposed vaccines against it.  Her points include: the World Health Organisation (“WHO”) released a statement to introduce mass vaccination; the smallpox vaccine, of unknown efficacy against monkeypox, causes a huge number of myocarditis cases and other known cardiac problems; smallpox vaccines, when used routinely in babies, were considered the most dangerous vaccine available; and, more.

Here’s what you should know about the latest money pox, also known as monkeypox.

The WHO released a clever statement to introduce the idea of mass money pox vaccination to the public:

The World Health Organization (WHO) maintains that the growing monkeypox outbreak remains “containable,” and that there is no immediate need for mass vaccination against the orthopoxvirus; since May 7, a total of 131 confirmed cases and 106 suspected cases have been reported in countries where it usually does not spread. (Reuters)

No immediate need. Let that statement ferment in your unconscious. It seems like a benign sentence, but implicit in it is the idea that soon there may well be a need to mass vaccinate the population against money pox, a disease that has never before spread due to casual contact.

I don’t think we even know the actual mortality rate for money pox. Has a westerner ever died from it?

Could this possibly be the same money pox that occurs in Africa? If so, how did it suddenly appear in so many countries at once? This fact alone – its novel, never-before-seen pattern of spread, should make us question whether it is a biowarfare agent being seeded deliberately. Probably not meant to kill us, maybe not even to harm us much. We can’t tell yet, based on the minimalist info coming out of our esteemed public health agencies. Perhaps it’s here just to nudge us to get another shot?

Below, we give the basics on smallpox, monkeypox and the newest vaccines coming to a clinic near you:

Efficacy testing requires that you vaccinate people and then see how many cases of the disease occur in the vaccinated versus the placebo group. If you were able to vaccinate a million people but disease frequency was such that you couldn’t even get a handful of cases occurring, you cannot perform an efficacy test.

Instead, in order to get vaccines approved or authorised, antibody tests are done that are claimed to demonstrate the presence of immunity. But oft times (as in the Covid or anthrax vaccines) the antibody that is selected for this purpose may not be a reliable indicator of immunity…as admitted at the booster VRBPAC meeting by FDA staff and committee members.

3.The smallpox vaccine causes a huge number of myocarditis cases and other known cardiac problems, making it almost certainly more dangerous than the risk of getting monkeypox. One in 220 recipients developed an obvious case of myocarditis in a US military study published in 2015, and one in 30 got a subclinical case.

Why would ANYONE take such a high risk of cardiac damage to avoid a minuscule risk of money pox? Only because they were misinformed.

ACAM2000 is contraindicated for use in individuals with severe immunodeficiency who are not expected to benefit from the vaccine… In 2003, a monkeypox outbreak was confirmed in the U.S. This was the first time human monkeypox was reported outside of the African continent. (Not true but close – Nass) Currently, there is no approved treatment or licensed vaccine for monkeypox, although the Advisory Committee on Immunisation Practices (ACIP) recommends that ACAM2000 be used for prevention of monkeypox in individuals at high risk of exposure (e.g., lab workers who handle monkeypox virus). Thus, there is an unmet need for a monkeypox vaccine.

Because ACAM2000 is replication-competent, there is a risk for serious adverse events (e.g., progressive vaccinia and eczema vaccinatum) with it; myopericarditis also occurs with ACAM2000 (estimated rate of 5.7 per 1,000 primary vaccinees based on clinical trial data), but the underlying mechanism is unknown (7,8).

The effectiveness of JYNNEOS was inferred from the immunogenicity of JYNNEOS in clinical studies and from efficacy data from animal challenge studies. [But humans do not necessarily respond the same as lab animals—Nass] Occurrences of serious adverse events are expected to be minimal because JYNNEOS is a replication-deficient virus vaccine. However, because the mechanism for myopericarditis following receipt of ACAM2000 is thought to be an immune-mediated phenomenon, it is not known whether the antigen or antigens that precipitate autoantibodies [causing myocarditis or other adverse events—Nass] are present in JYNNEOS as well.

Further down, CDC admits again that it has no idea what it is doing with the Jynneos vaccine:

Because a correlate of protection has not been established and there is no known antibody titer level that will ensure protection, titer results should be interpreted with caution in such cases to avoid providing a false sense of security.

…the smallpox vaccine — which hasn’t been routinely offered in Canada for decades — will be offered to those at high risk of contracting the disease, such as those who have been in contact with confirmed cases.

[Quebec’s top health officer] Boileau said the province has access to hundreds of doses at the ready, but vaccination will only occur after a recommendation from public health. It will not be open to the general public.

**Dr. Meryl Nass is an American physician and researcher who proved the world’s largest anthrax epidemic was due to biological warfare. She revealed the dangers of the anthrax vaccine. Her license was suspended for prescribing Covid medications and spreading “misinformation.”