In the slum, no one obeys the rules – yet hardly anyone gets sick 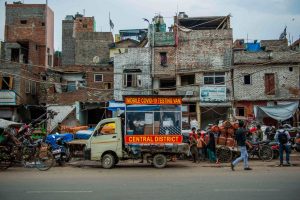 Researchers and aid workers in India continue to be amazed at why the many densely populated slums in the country have so few patients and deaths from corona. It may be due to the increased immunity that the residents have.

“We really have no idea,” said Bhagwan Devi, when asked how widespread the coronavirus is in the slum where she lives and works, VP Singh Camp in the south of the Indian capital, New Delhi. “There are at least 6,000 people living here, but we were hardly able to test 100 of them. The people don’t want to be tested. They are afraid of the stigma and of having to sit at home. ”

Devi sounds angry and tired. She is a community care worker with a minimal government salary. Her job is to go door to door every day to track down people with symptoms of Covid-19 and at-risk groups. Many doors remain closed. As Devi navigates the narrow alleys, she constantly urges other residents to wear their mouth masks – compulsory throughout India, but hardly enforced within the neighborhood.

The results of several studies on antibodies do not surprise Devi. Of all residents of Delhi, 23 percent would already have had the corona virus. And in Mumbai, where a separate study was conducted in some slums, antibodies were found in 57 percent of the residents there.

“If people don’t want to be tested, how can we determine who should be quarantined?” Says Devi. “How can we prevent the virus from spreading quickly?” 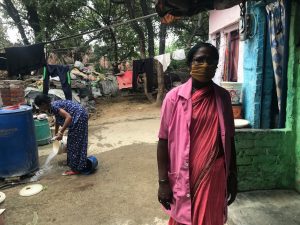 Because almost all people are not sick. And Devi has not seen any more deaths than usual in the previous 6 months of 2020.

There has been no large-scale outbreak of Covid-19 in any slum in India.

This is something that most astonishes the researchers about antibodies. Not that the virus turns out to be so widespread in the densely populated slums – but that this is not accompanied by the seriously ill and death rates that some would expect.

Based on the antibody sample compared to the number of registered corona deaths, 0.07 percent of infected people would die from the virus in Delhi, 0.12 percent in Mumbai. In New York, the “experts” have been telling, the virus seems to be ten times more deadly…..

An obvious explanation seems to be that simply not all corona deaths are reported. In both Delhi and Mumbai, hundreds of corona deaths were found not to be counted at various times. This was corrected afterwards. Based on this, mathematician Murad Banaji of Middlesex University in London calculated that a more realistic mortality rate is between 0.09 and 0.45 percent. But even that highest estimate is still considerably lower than in New York, and besides: there does not seem to be any excess mortality. The total number of deaths in Delhi between April and June was even lower than the previous five years.

“There must be other reasons for the relatively low number of deaths,” says researcher Sandeep Juneja of the Tata Institute of Fundamental Research (TIFR), who was involved with the municipality in the study of antibodies in Mumbai. “A vastly higher number of deaths could not possibly be hidden.” How it is possible? “That is a very important question, which we need to do more research on.”

The municipality praises its own policy of door-to-door screening and testing and rapid isolation of sick and at-risk groups in slums – who therefore received quick care when their symptoms got worse. Another possible reason, according to Juneja, is the average age of the Indian population, especially in slums. Most of the people who tested positive in these neighborhoods were between the ages of 21 and 55. “And they may have a better immune system.”

The latter, according to molecular biologist Gobardhan Das of Jawaharlal Nehru University in New Delhi, is the main reason for the low mortality rate. “Not only because of the unsanitary living conditions, meaning that they constantly build up immunity. Also, almost everyone in India has been vaccinated with the BCG vaccine. ” This vaccine is intended for tuberculosis, but it increases resistance to a variety of other diseases.

Das conducted a data analysis of 191 countries and saw a clear correlation between the mortality rate from the coronavirus and the degree of vaccination with the BCG vaccine. In several countries, including the Netherlands, the BCG vaccine is now being tested on healthcare workers to see if it can protect them against serious disease symptoms should they become infected.

Meanwhile, community worker Devi in Delhi continues to try to keep the corona virus out of her neighborhood with very limited resources. She ensures that anyone who does not want to be tested, but does have symptoms or came into contact with sick people, isolates voluntarily at home. She then visits daily for a check-up. She keeps an extra close eye on risk groups, with pulse oximeters for measuring heart rate and oxygen, for example. 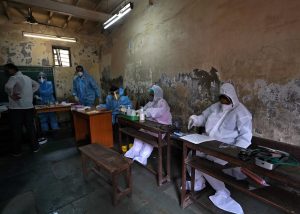 57 percent of Mumbai’s slum residents have developed antibodies against Covid-19. Nowhere else in the world has such a high presence of antibodies been found; and practically no deaths caused by COVID-19.

The majority of slum residents in the Indian metropolis of Mumbai have had Covid-19. This is suggested by the outcome of a study in three parts of the metropolis, for which nearly 9,000 people were tested. 57 percent of slum residents were found to have developed antibodies against the virus, compared to 16 percent of people in other residential areas. On average, this concerns 40 percent of the total number of inhabitants.

The share of infected people dying of the virus is only 0.05 to 0.1 percent, according to the new figures.

Does this mean group immunity?

It is no surprise that the number of infections in slums is considerably higher than in other areas. People often live close together under unsanitary conditions and often share sanitary facilities with dozens of others. That is why at the start of the epidemic there were fears of enormous outbreaks with disastrous consequences in these neighborhoods. That is why the authorities kept a close eye on the slums. All doors are checked to ensure that everyone with symptoms is tested as much as possible. And for those who live in a single room with several people, or who are at extra risk due to age or other conditions, isolating at home is not an option.

According to the researchers, who collaborated with the national government think tank NITI Aayog and the Tata Institute of Fundamental Research (TIFR), the study is representative of the three boroughs, which are home to approximately 10 percent of Mumbai’s population of 18 million people. They expect that studies in other city districts, which will follow next month, will yield a similar result.

Does this mean that cities like Delhi, Calcutta, Mumbai and Chennai are on the cusp of achieving group immunity, given that 42-55 percent of their residents live in a slum? The Indian researchers do not want to go that far – especially since recent research suggests that antibodies against Covid-19 decrease after 90 days. They do emphasize that nowhere else in the world has such a high presence of antibodies against Covid-19 been found. “This will be helpful for our understanding of herd immunity and disease spread.”