Robert Gorter opens vegetarian restaurant Baldur after realizing what an important rol nutrition and well prepared dishes play in health and disease. He offered consultation to his patients (especially the chronically ill and cancer patients) but he often met resistance as patients were saying things like: “healthy food does not taste good!” or “how can I cook vegetarian?” or “it takes hours to prepare a healthy meal” or “organic food is too expensive!” Thus, he offered patients to come to his apartment upstairs on a Saturday evening and cook together. In this way, he could show them that cooking vegetarian is easy and tasty and does not take more time than to preparing a steak. But, there were Saturday evenings that more than 20 patients would ring his door bell, requesting to be taught vegetarian cooking. 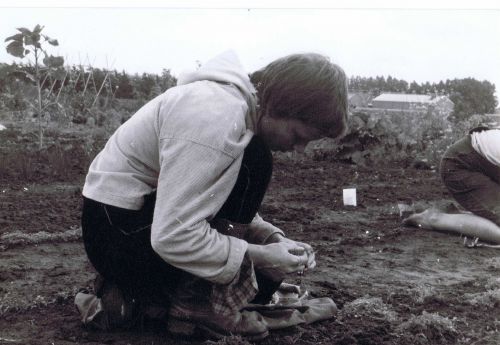 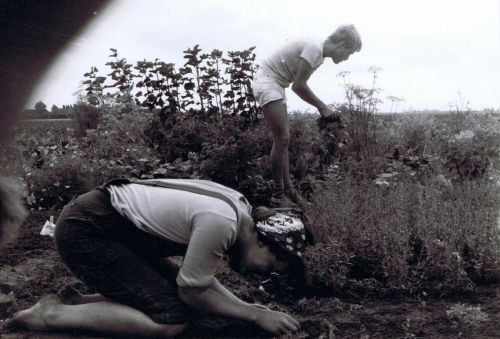 Baldur’s team cultivated its own herbs like Rosemary, Sage, Lavender or Garlic, for the kitchen according to the bio-dynamic principles and here, with Tineke van Oranje (she was also Robert Gorter‘s secretary at the Jellinek Kliniek, a state clinic for heroin addicts and alcoholics) on her knees, careful selecting the herbs for that night dinner (approximately 1978). 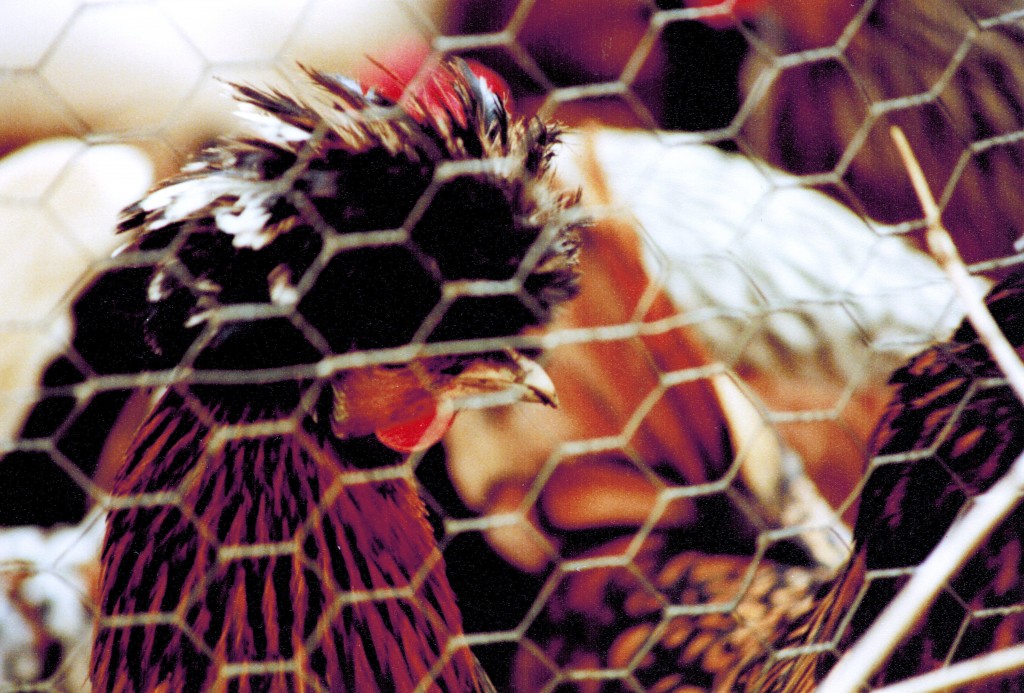 Robert Gorter had in an adjacent back yard a henhouse with about 25-30 chicken that laid all year around organic eggs for BALDUR (and a few for own use).

It become then clear to Robert Gorter that there was a need to receive information on healthy nutrition but also how to get practical instructions how to prepare a healthy dinner. So the idea to start a restaurant next door with a large kitchen to kill several birds with one stone:

1)      To provide space and tools to give cooking classes to adults and children of the Waldorf School in Amsterdam.

4)      To support the arts like music and painting and sculpturing by offering artist to exhibit or play in the restaurant.

And so, the idea to build restaurant “Baldur” was at Weteringschans 76 was born. 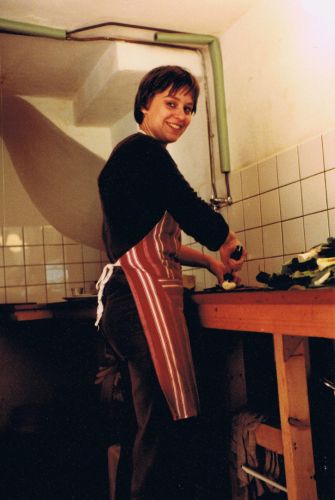 One of the 18 co-workers at Baldur, preparing the dinner for that evening in the kitchen. She was pretty short and needed objects like buckets to stand on 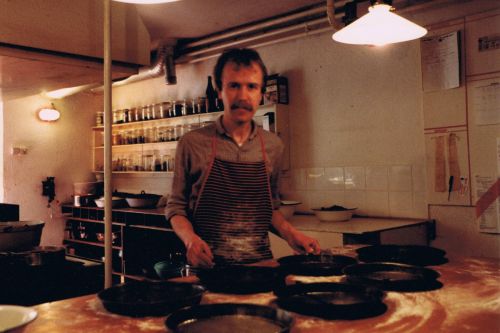 One of the 18 co-workers at Baldur, preparing one of the extremely popular items of Baldur, the so-called “Banana Dream Pie”!

It took several months to renovate the building and have the space (which harbored first a well-known Beauty School for visagists) adapted to being a restaurant with special colors on the walls etc.  Pictures here show how, on free weekends and late at night, Robert and volunteers worked on walls, concrete floors, and ceilings. And nobody ever knew that Robert, covered by cement and paint, had been given a life expectancy of six months by his surgeon and colleagues. 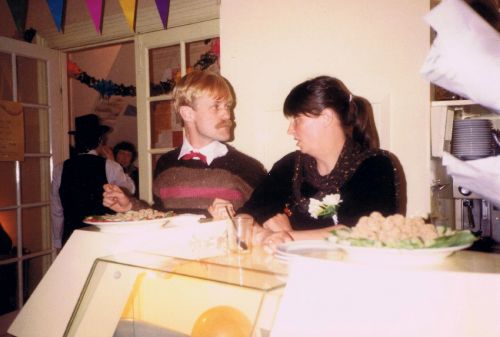 On Sundays, from 11.00 till 12.30, free coffee concerts were organized and quickly these coffee concerts became popular and even announced in all local news papers as a place to go on Sundays. Only live classical music was performed and coffee with the famous “Bananen Droomtaart” was served without charge. 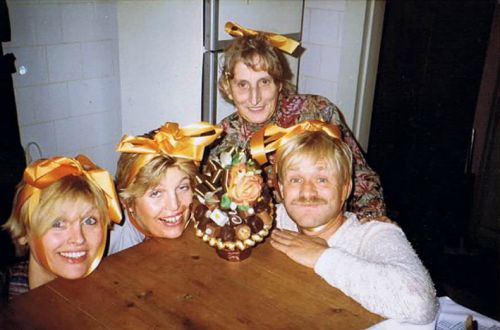 Here are Robert Gorter and his three receptionists and doctors’ assistances (Ria Bos and her sister Elly van de Noort, and Herma, the elderly lady standing) at that time, at the house of Rob, the best bakery of Amsterdam in the Kalverstraat next to the 15th century Orphanage (which is now a museum). It was obviously just before Eastern (1981) and the team acted like Eastern Eggs and tried to blend in with a true Eastern Egg which were as a “Thank You” donated by Rob the baker, for the team of Robert Gorter had done for his wife who died pretty suddenly from an aneurysm in the brain. 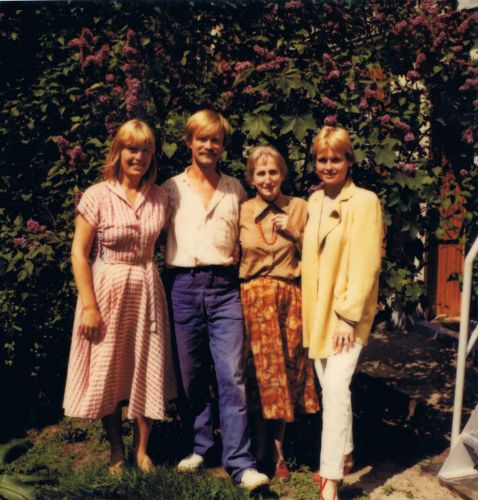 In front of the blooming lilac tree in the back yard of Robert’s doctor’s office the team at that time (1980) with Ria Bos (far left), Robert Gorter, Herma and Elly van de Noort (far right). They formed a very reliable and committed team and many of the patients gave them the nick name “the Cookies of Dynamite” 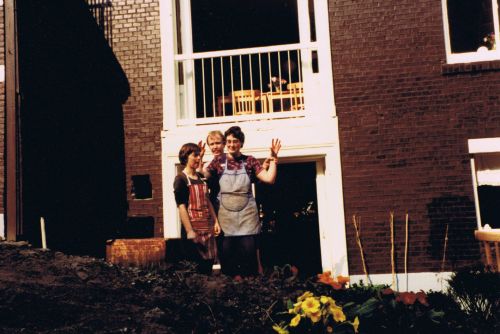 Several people worked at Baldur and all according to the Three-Fold Social Order Principle (see elsewhere). Here are some more collborators working in the kitchen or taking a little break in the early spring sun. This must have been in the spring of 1976. 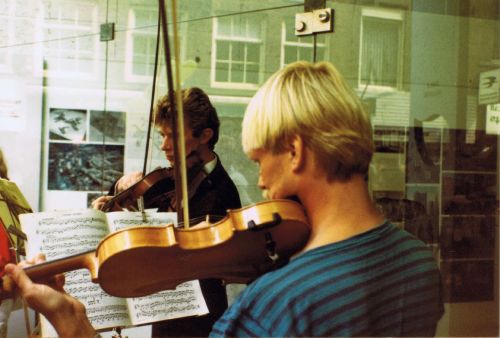 Here, Dr. Arie Bos, the family practitioner who would later receive the praxis and doctor’s office from Dr. Robert Gorter as a donation when Robert left for San Francisco, USA, playing duets on their violines in the Leides straat in Amsterdam, collecting money for the non-profit, tax-exempt patient-based organization “Odin”. It would rain guilders (1981).