Robert Gorter on Official Tour to China (June and July 1981)

Robert Gorter had a busy schedule and he told us a lot about his experiences of which we remember a few and we will report here.

“I was invited to see the Great Wall and on the way, visit the tombs of the Emperors of the Ming Dynasty. Usually, we moved in a black limousine without a license plate but with a driver and the translator who was also my personal tour guide. It happened that we took a coffee break half-way in a small village. The driver had a few vegetarian sandwiches and a thermos can with coffee. In minutes, we were surrounded by literally hundreds of Chinese villagers and their children, laughing and clapping their hand and talking first shy and then loudly to the drivers and my guide. It was clear they had never seen a blond, blue-eyed person and I appeared to them to be an alien from Mars. So we all laughed and then a few women walked up to the guide and asked him if they were allowed to touch me: only then they would believe what they saw. (I had to think of the story of Thomas who only believed that Christ had risen after he touched His wounds). Of course, I consented and a handful of men and women touched my hair and my face and jumped of joy that I was real; and obviously friendly. I received little gifts and food for on the way…….” 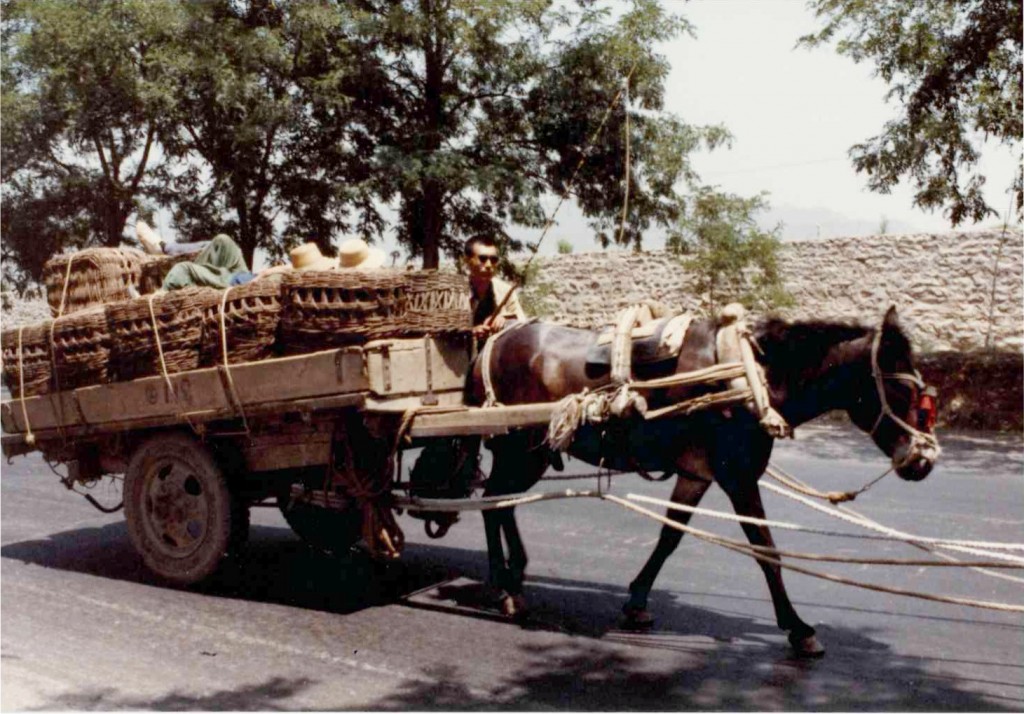 “On the third day in Beijing, I was invited for a gala dinner with about 18 Chinese hosts present. They were mainly from the Ministry of Education and some other Ministries. The dinner was in a huge room at the main palace in the Forbidden City. The room seemed to be reserved for formal dinners. Throughout my stay it was remembered that I am a strict ovo-lacto vegetarian and this I never met in any other country…… At a certain moment, after the speeches which had some diplomatic content, all attendees were silent when I was offered a very special delicatesse: a special and unique part of a formal dinner from imperial times!  When the bowl was brought in by servants with white gloves, everybody got very silent and all the attention was directed towards me. Then, the bowl was opened and in the middle was one large (duck or goose?) egg of blue-black color. It turned out to be a hard-boiled egg that was marinated and buried in special terracotta pots for about 10 years. All attention was directed towards me and everybody sat there in full anticipation of how much I would like it….  The substance of the egg-shaped object was extremely leather-rubbery and could not possibly chewed and swallowed. This was the first time in my life I experienced a nightmare while being 200% awake. What was a delicatesy for them and impossible to eat for me qua taste and substance. Thus, with a big smile on my face and sweating profusely, I chewed and chewed and finally, I was able to somehow swallow it down. This showed to me that I had a lot more to learn about other cultures and their world view and their appreciations.”

“One day during my stay in Beijing, we went to see the Great Wall which was a few hours drive away from the capital. It was a beautiful day and upon arrival, it was a very impressive view (bearing all I knew about history in the back of my mind). At that time, tourism was not a big item yet and only about 2 km of the wall were accessible for visitors. It was obvious that the Great Wall was severely neglected under previous governments. While walking there on the Wall, from the opposite direction, a group of Asians approached Robert Gorter and his translator / tour guide. While passing each other Robert Gorter heard them speak Dutch! Of course, he was very surprised and turned around and addressed the group in Dutch. Then a very friendly conversation developed and it turned out that it was a (diplomatic) delegation of middle aged Indonesians. Most of them had studied in the Netherlands (at the Universities of Leyden, Groningen and Amsterdam). And it was his understanding that senior Indonesian academics who studied in the Netherlands would still speak Dutch among themselves. The conversation in Dutch was very pleasant and they separated as best friends and exchanged business cards with an open invitation for both sides to come and visit.” 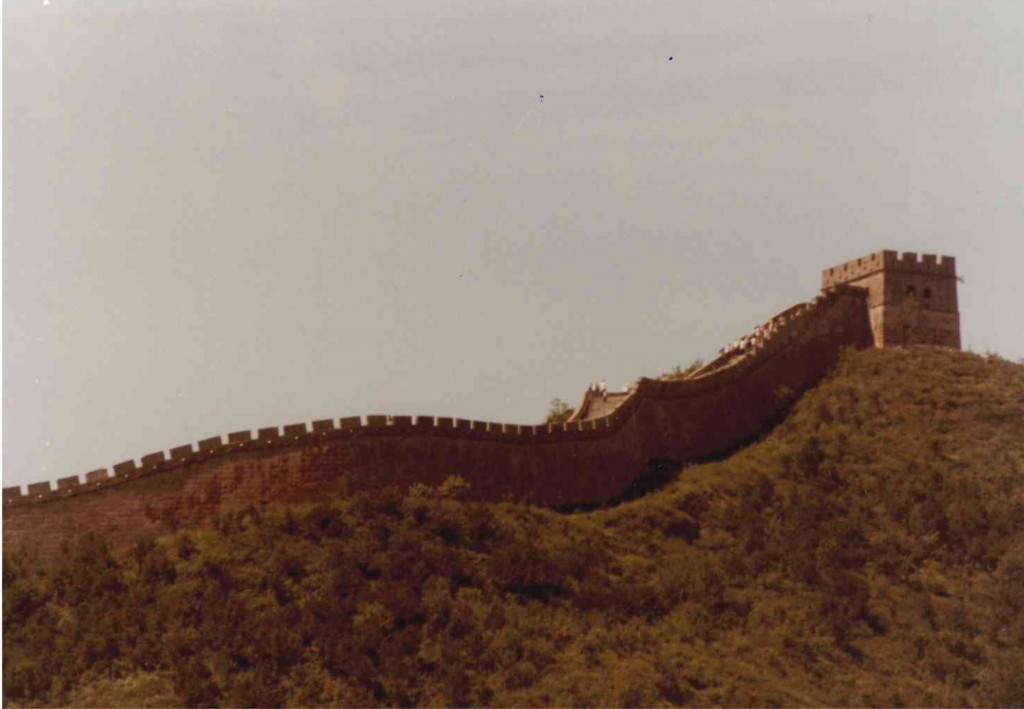 In 1981, tourism was practically non-existent and the road to the Great Wall was in a poor condition.  Also, the Wall was opened for visitors for about one to two kilometers due to the poor and sometimes dangerous condition of the structures of the Wall. 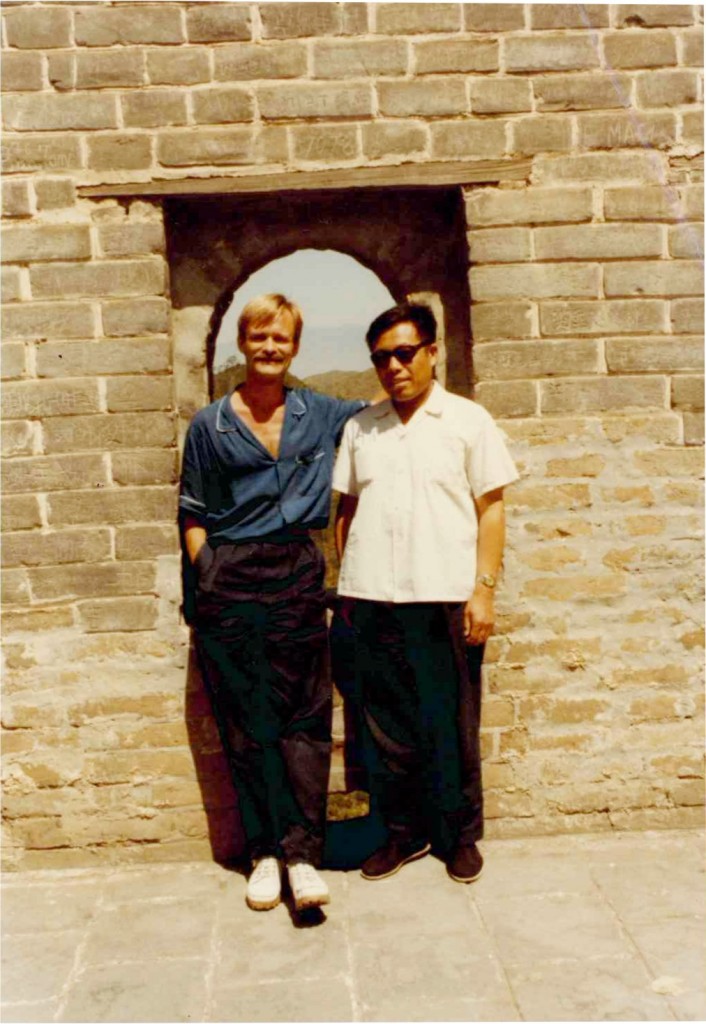 “A visit to the tombs of the Ming Dynasty was also very impressive. In huge egg-shaped tombs which were for 2/3 underground there was built a large construction like a replica of a palace with several chambers. Here, the deceased emperor would be buried in full estate and next to him his empress and in the next rooms his concubines. Then, in other rooms, his court would be laid to rest. It was believed that in heaven one could continue to serve the emperor as a God if one would be buried with him (alive). Thus, when everything was ready, and the emperor’s remains were put in his shrine, all others would follow (voluntarily?) and lay in their designated places and the doors would be closed for ever. Then, the hundreds of members of his court would suffocate due to a lack of oxygen and die in his presence.”

“We visited the Forbidden City in the center of Beijing and a few summer palaces in and around Beijing. At one of the palaces, there was a wall around the temple complex and built in a perfect circle. If one would whisper it would travel along the 300 meters long wall and reach you a second or two later from the other side and with approximately the same strength of one’s voice. This reminded me of the perfect acoustics of the arenas of the Greek temples and amphitheaters.” 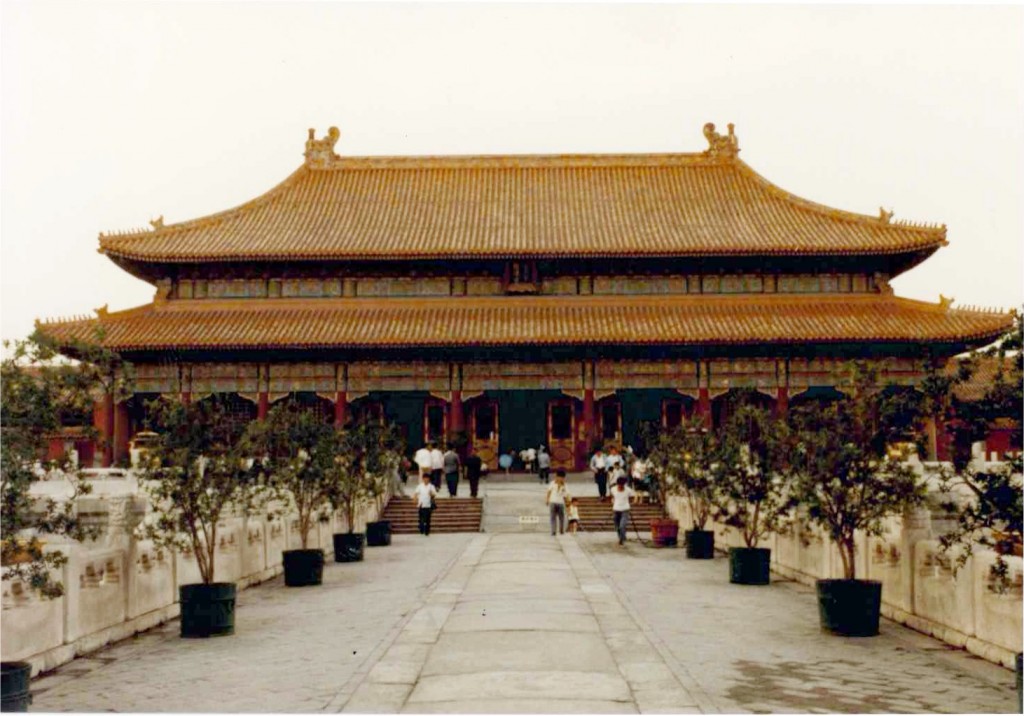 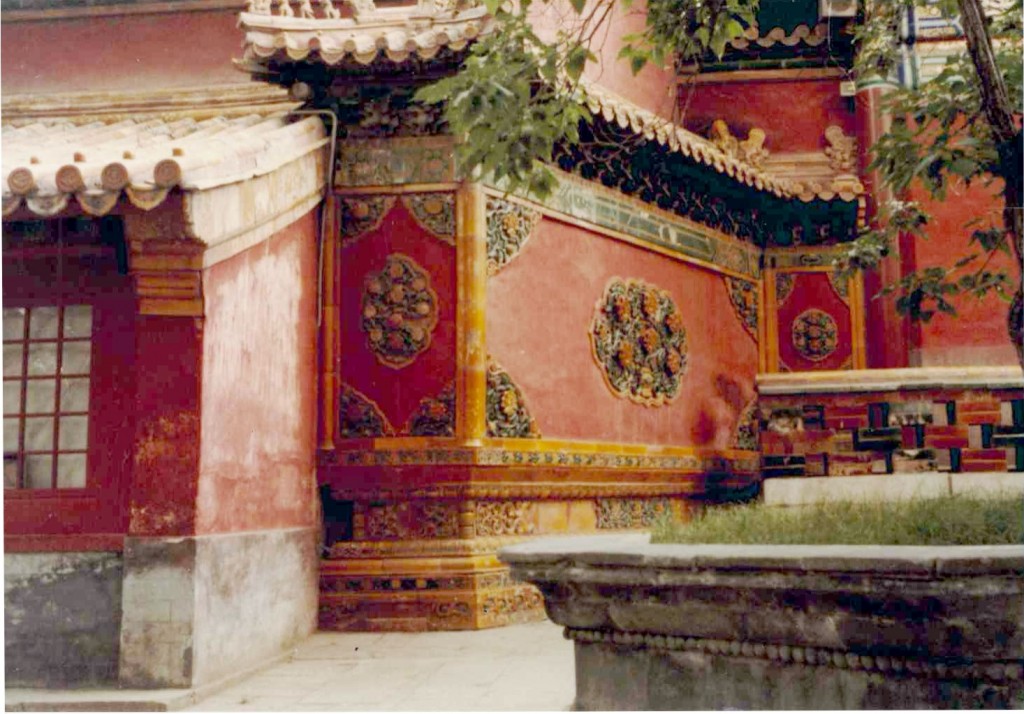 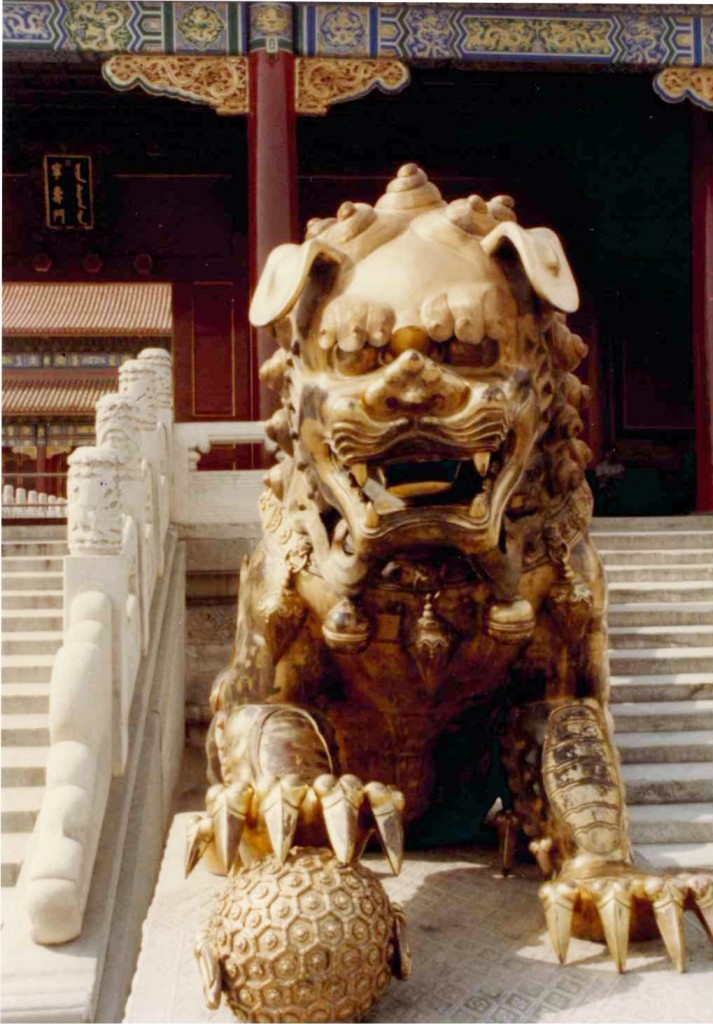 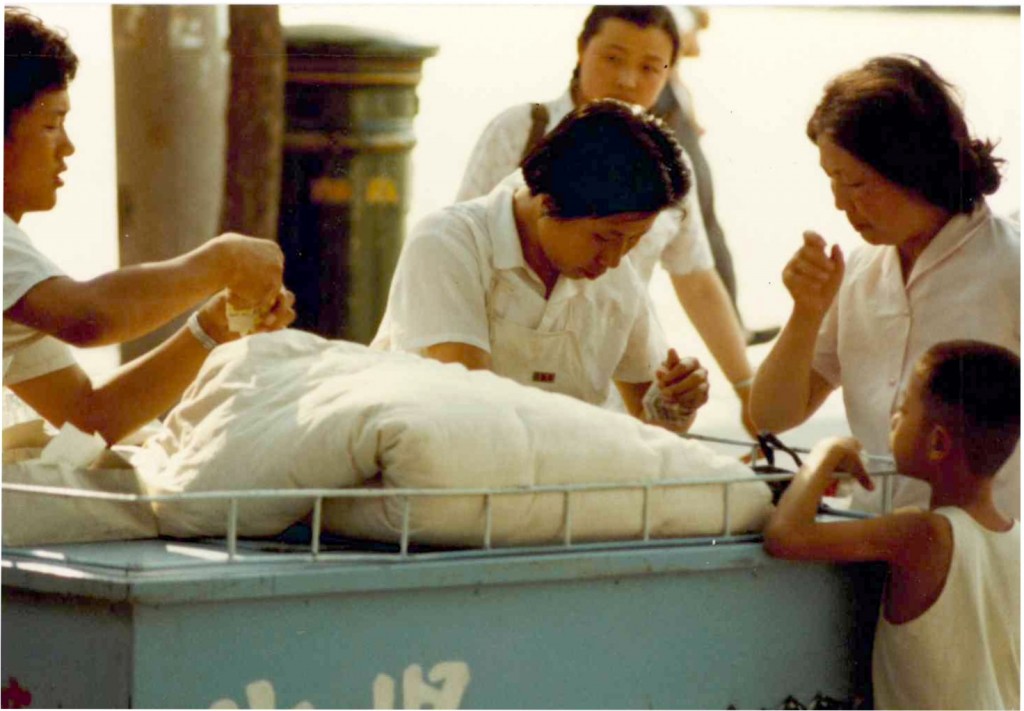 A scene at a street of Beijing in June 1981 where ice cream was sold to pedestrians. The ice cream vendor was very popular and many would stand in line to buy an ice cream. It seemed this was one early and first attempt to allow private business.